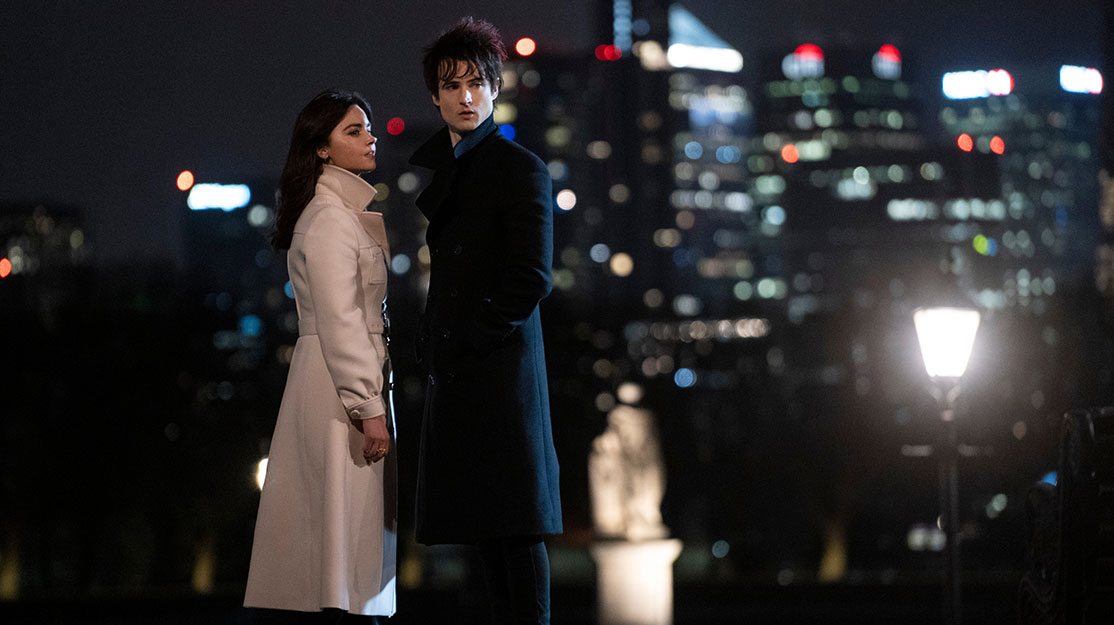 For more than 30 years, there have numerous attempts to bring Neil Gaiman’s epic and enormously ambitious graphic novel The Sandman to the screen.

For his part, Gaiman jokes that his role during that time has been to “try to stop bad ones from happening. Fortunately, I was always successful in this.”

But now, under the celebrated author and screenwriter’s own guidance, The Sandman is coming to television as a Netflix original series, which launches tomorrow.

Set in a world called the Dreaming, the story begins when the Sandman, Master of Dreams (aka Dream and Morpheus), is unexpectedly captured and held prisoner for a century. His absence sets off a series of events that will change both the dreaming and waking worlds forever.

To restore order, Dream must journey across different worlds and timelines to mend the mistakes he’s made during his vast existence, revisiting old friends and foes and meeting new entities – both cosmic and human – along the way.

Based on Gaiman’s DC comic series, The Sandman blends myth and dark fantasy in a series that Gaiman developed and exec produces alongside showrunner Allan Heinberg and David S Goyer.

The ultimately successful plan to finally bring the comic to the screen was hatched in 2020,  with Gaiman (American Gods, Good Omens) himself on board for the first time. “We’ve reached a point that really did not exist when The Sandman comics began,” the novelist explains. “Longer-format, novelistic television series now have the special effects and budgets to bring this world to life. Technologically, we’re in a place right now where we’re getting to make Sandman in a way we could not have dreamed of 15 years ago, even 10 years ago.

“It’s now possible to make Sandman, but not easy. It’s really hard. But the resources are there, the people are there, the skill set is there, and the determination is there – and we now have an entire generation of high-level creative people who have grown up reading Sandman who love it and want to bring it to life with authenticity. The determination everywhere to make this and get it right has been absolutely a breath of fresh air.”

A long-time comic book reader, Goyer (Blade, The Dark Knight) remembers first picking up a copy of The Sandman in 1989. He later forged a friendship with Gaiman after adapting one of his short stories called Murder Mysteries.

Goyer had also been an executive producer on the only Sandman movie adaptation Gaiman says he had liked, and when that project failed to materialise, they discussed collaborating on a small-screen version instead.

The pair then brought in Heinberg (Wonder Woman) – another fan of the comics since reading them when he was at college in the 1980s – to be the showrunner. Heinberg had just come to the end of his deal with US broadcaster ABC, where he spent 15 years working with Shonda Rhimes (Grey’s Anatomy), when he went for a meeting with DC parent Warner Bros.

“At the very end of the meeting,” Heinberg recalls, “I said, ‘What are you guys doing with Sandman?’ And they said, ‘We’re actually taking it out to streamers, and we don’t have a writer and we don’t have a showrunner. David S Goyer’s producing, do you know him?’ By the time I got to my car, David had called me. That was it. I walked into my dream job.”

The trio agreed to co-write the pilot episode – they talked it through, divided it up and each wrote a third before knitting their contributions together. As the showrunner, Heinberg then took overall responsibility for getting it on screen, but having a script in place before opening a writers room meant they had already set the style and tone for the rest of the series.

After pitching the series concept to Netflix, Heinberg and Goyer then headed to upstate New York where they spent a few days at Gaiman’s home breaking down the first season and honing the pilot.

“It’s so cool that a TV series was born out of these two friendships that I had, and that all three of us came together through a genuine connection,” Goyer says. “It took 30 years to get this show made, and it took over a decade for me personally, but it finally feels like it’s being made under the right circumstances.”

Perhaps one of the reasons why The Sandman has taken so long to bring to the screen is that the world of the comics is so vast – 75 issues plus a special, and numerous other resources.

Therefore, “you immediately run into the question of what to throw out,” Gaiman notes. “What do you throw away? What do you leave? And how do you throw that stuff out and still keep it Sandman? What’s glorious is that Warner Brothers and Netflix absolutely stepped up. I agreed to make this with the assurance that what I was making would be Sandman, and it is.”

For fans of the source material, season one of The Sandman leans on the first two graphic novels, Preludes & Nocturnes and The Doll’s House. The writers would continually return to them if they ever got into trouble and needed a problem solved, and usually found the solution within those pages. But no matter the difficulties, they promise that none of the story’s unique quirks have been ironed out.

“We wanted everyone involved in making this show to treat the story’s attributes as features, and not issues to be fixed,” Goyer says. “Sandman is quirky. It changes genres. It’s a historical fantasy. It’s a horror story. It’s a modern-day drama. It’s high fantasy. Past adaptations tried to beat this complex story into submission and say, ‘It’s just this kind of story,’ when actually, it’s every kind of story. Breakout shows these days don’t follow the rules, in the same way Neil didn’t follow the rules when he wrote the comics.”

But though Goyer and Heinberg’s love of the story means they have been very faithful to the comics, Gaiman also gave them his blessing to expand the story with material not in the original books.

“We’re trying to be extremely faithful to the comics and to their spirit,” Heinberg adds. “Neil is very present, even though he’s based in New Zealand. Every script, every prop, every costume, all the sets – everything gets Neil’s eyes and his feedback. We’re working with a lot of the original art, and all the props are almost to the letter as they are in the comics. It does feel like you’re living inside the comic book when you walk around the sets.”

Some changes include an expanded role for “escaped nightmare” The Corinthian (Holbrook) and a gender swap – from John to Johanna Constantine (a haunted necromancer played by Coleman) – while the series also boasts an extremely diverse and inclusive cast.

“It was incredibly liberating to be able to look at everything in Sandman from a perspective of now and to ask, ‘Well, if I was beginning writing this story now, would I still do that?’ which was just freeing,” Gaiman says. “We were able to give a new sense of balance to the characters, I think.”

Heinberg picks up: “The Sandman comics were leagues ahead of everybody in the late 80s in terms of the depiction of women, race, sexuality and gender. Neil was talking about all of those issues long before anybody else was, especially in a medium like comics. But in creating The Sandman for 2022, we knew we wanted to expand the world and make some changes.”

Teasers and trailers have already revealed some of the remarkable production and costume design that will feature on screen. Now fans of The Sandman will finally be able to see how the comic’s own creator envisioned a live-action version of his work.

“The nice thing about Neil being as game as he is about opening up the material is we will be able to play with fans’ expectations,” Heinberg says. “They won’t always know what’s around the corner. We’ll get there eventually, but Neil has been very, very up for taking detours and deepening our time with the characters.”

“We know this property is near-sacred to so many people,” says Goyer. “Fans of comics are going to be shocked at how faithful an adaptation this is. All their beloved characters are in there; we haven’t stripped anyone or anything away because it’s too strange or difficult to adapt. I have an out-of-body experience as I’m watching the episodes because, as a fan, I can’t believe what I’m seeing; because everything’s brought to life in the way that I’ve been dreaming it would be for 30 years.”

As for Gaiman himself, he says seeing the 10-part series come to life has been “moving and often even overwhelming.”

“There are thousands upon thousands of people out there with Sandman tattoos they put on because it meant so much to them, and I want all of them – because they’re all going to be worried that we’re making something rubbish – to be a little bit happier after they’ve seen the first episode,” he says. “Every part of this show feels like Sandman. And that, for me, is the most important part and what makes my heart happiest.”