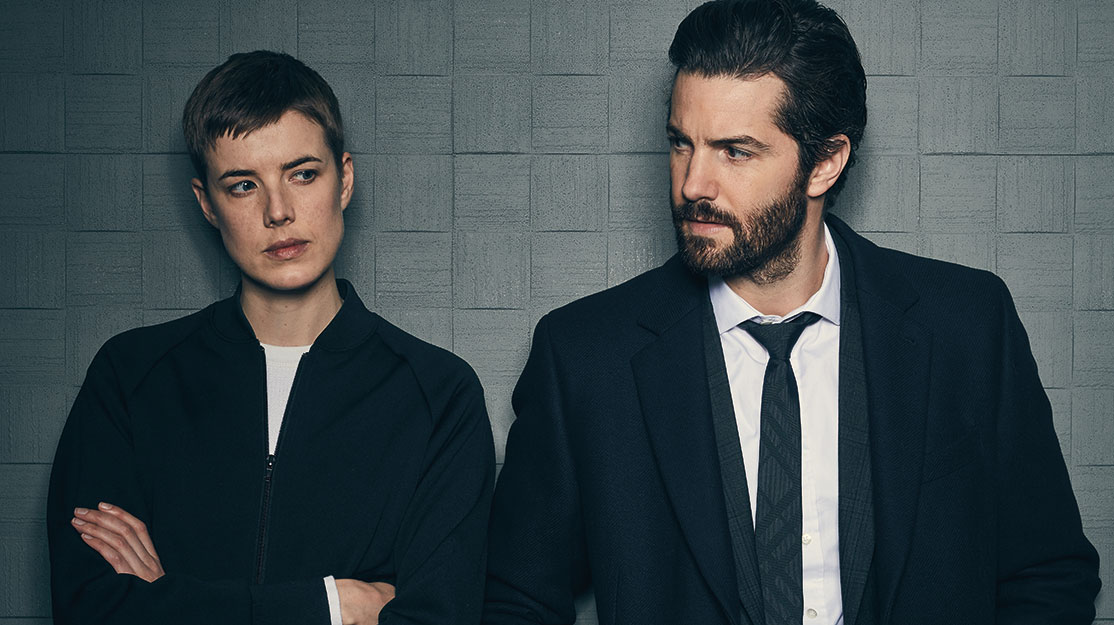 Luther creator Neil Cross begins the countdown to the end of the world in Hard Sun, starring Jim Sturgess and Agyness Deyn. DQ joins the cast and crew on set to find two detectives fighting crime as society threatens to descend into chaos.

Pushing through the market square, so many mothers sighing // News had just come over, we had five years left to cry in // News guy wept and told us, earth was really dying // Cried so much his face was wet, then I knew he was not lying.

The unrivalled legacy of the late David Bowie reaches far and wide, with musicians, filmmakers and fashion designers alike finding inspiration in his flamboyant use of make-up and costumes and his groundbreaking musical flair.

In television, Bowie’s music has been used as title tracks for Life on Mars, Ashes to Ashes and The Last Panthers, and is said to have inspired Fox network drama Lucifer. Now, his song Five Years – the opening track on his seminal 1972 album The Rise and Fall of Ziggy Stardust and the Spiders from Mars – serves as the loose inspiration behind the new series from Luther creator Neil Cross.

Described as a pre-apocalyptic crime drama set in contemporary London, Hard Sun follows detectives Robert Hicks and Elaine Renko as they discover the end of the world is nigh. With five years until annihilation, they face the prospect of maintaining justice as Armageddon looms. But how do you leave your family behind each morning and put your life at risk? And what criminal would fear a prison sentence in a world on the brink of extinction?

It’s a suitably sunny day when DQ joins the cast and crew on set during filming of scenes for the climactic sixth and final episode. The vast number of buildings and grounds that make up a former HSBC training site, located on the outskirts of north-west London, have provided many of the interior and exterior locations for the series.

A stairway and some double doors inside one building lead to the set of the police station. Here, a dimly lit observation room is filled with CCTV monitors while a central room is full of desks, with one wall covered with photographs of victims, crime scenes and evidence. The walls are painted metallic grey throughout as flashing lights from a bank of computer servers break the darkness.

It’s inside interrogation room FR7 that DQ meets executive producer Kate Harwood, MD of producer Euston Films. The sterile room contains a single steel desk with a recorder on the table. There are grey tile walls and a green lino floor, with CCTV cameras in every corner. Light shines through barred windows.

Hard Sun represents the first commission for Euston Films since Harwood rebooted the FremantleMedia label in 2014. The former head of drama for the BBC’s in-house production unit, she was at the channel when Cross first introduced tough-talking detective John Luther, brought to formidable life by Idris Elba.

BBC1 commissioned Hard Sun on the strength of one episode, so after getting the commission, Cross spent the next 18 months writing scripts. Brian Kirk (Game of Thrones, Penny Dreadful) joined as lead director, with Eve Stewart (The King’s Speech) as production designer and “rising star” Nick Rowlands (Ripper Street) as second-block director.

“It’s a crime show with a science-fiction premise,” Harwood says. “It’s as procedural as you can be when the cops are carrying around the secret that the world is going to end. So it’s part cop show, part sci-fi, part conspiracy thriller. But we’ve called it a pre-apocalyptic crime show set in contemporary London.”

Amid a lot of interest in the US, streaming service Hulu quickly boarded the series, while distributor FremantleMedia International beefed up its budget. Tax breaks have also been used to maximise the show’s finances.

On screen, Jim Sturgess and model-turned-actor Agyness Deyn (in her first TV role) play Hicks and Renko respectively, distrustful partners who seek to enforce the law and protect their families as destruction edges ever closer. Nicki Amuka-Bird plays an MI5 government official, a mysterious character who is part of the establishment and trying to suppress the information.

“Neil always says Hicks is the sun and Renko is the moon,” Harwood explains. “There’s a polarity about them. They circle each other. Sometimes they’re partners, sometimes they’re opposites. It’s a distrustful, must-trust relationship. That tension between them is absolutely essential. Hicks is explosive and external and bright and Renko is more watchful, more secretive, more held back and it’s a lovely duality between them. Agyness has never done TV. She seemed really excited by the material as soon as we met her. She’s like a duck to water and she’s so hard-working, focused and punctilious.”

Back on set and with the cameras rolling, Sturgess and Deyn find themselves in the lobby of a grand house, the air thick with smoke as an elaborate chandelier hangs above. One side room appears to be a surgery, with a lobotomy chair in the middle. Other rooms appear to be bedrooms, with TVs screening static fuzz in the gloom.

As Renko and Hicks, they enter the room from a dark corridor, torches raised to find a lady in a medical gown. Slowly, others emerge from the darkness to surround them in what promises to be an extremely creepy climax to the sixth episode.

“It starts off as a procedural show with Hicks and Renko investigating a particular crime – a man who’s apparently fallen off a balcony and is found dead in a tree,” explains producer Hugh Warren, who also reveals the Bowie link to the series. “But what unravels is that his stolen flash drive contains this Hard Sun dossier that, internationally, is being suppressed by government forces because they’ve learnt that an extinction-level event is coming. So by the end [of episode one], Hicks and Renko know there’s five years left for the planet and that’s the new world they’re in.”

Filming locations took in areas of London including Shepherd’s Bush, Shoreditch and Oxford Circus. Naturally, the logistics and cost of moving the production around the city caused headaches for Warren and his team. The scripts also called for numerous night shoots, which became increasingly difficult as the production, which began shooting at the end of January, entered spring and early summer.

“It’s also very action-heavy for British television so there are a lot of stunts, a lot of complicated stuff to shoot. The normal amount you would expect to shoot on an average day for a TV drama, we can’t achieve,” he admits. “We’re shooting for many more days per hour than you would expect. That’s a real challenge in terms of time because we’ve only got the actors for a finite period.”

But what will fans of Luther, which is returning to the BBC for a fifth season, make of Cross’s latest series? “I think it will surprise people,” says Warren, adding that celebrity cosmologist Brian Cox has been on hand to help the creator root his end of-the-world theory in fact.

“What it has in common with Luther is the darkness – there are some very dark stories in there but also real humanity. We’re telling a huge cosmic story about the end of the planet but what’s interesting is it comes down to really common human experiences. They’re very everyday stories set against this massive global catastrophe.”

Too good to turn down

Having only just appeared in a BBC drama – Stephen Poliakoff’s Close to the Enemy – Jim Sturgess wasn’t planning on signing up for another one. Instead, he was pondering a break from acting to focus on his music career. So it’s testament to Neil Cross’s script that the actor immediately signed up to play detective Robert Hicks in Hard Sun.

“I was almost cursing Neil for writing something so good,” Sturgess reveals, adding that he was attracted by the combination of “messed up, flawed characters” and the overall concept for the series.

“What’s great about this, and why I’m really excited about it, is it’s a pre-apocalyptic story that doesn’t need to rush,” he says, citing movies such as Armageddon that cram an extinction-level event into 120 minutes. “I hadn’t seen this before, where something’s looming but you can really spend time looking at what that’s going to do to individuals and society as a whole. TV works for a project like this because you can really take your time with it.”

Cross travelled from his New Zealand home for rehearsals alongside Sturgess, co-star Agyness Deyn and lead director Brian Kirk. It was there that the two leads cemented their partnership, both on and off screen.

“Our relationship on screen is incredibly intricate and at times complicated and strategic,” Sturgess says. “Off-screen It’s great to have a partner in crime on set who you really trust, has a very similar work ethic and cares about it as much as I do. She brings everything she has to it and we get on really well. We’re both pretty chilled out.”

Sturgess, whose film credits include 21 and Cloud Atlas, last year starred as a chef in AMC’s 2016 series Feed the Beast, an adaptation of Danish drama Bankerot. He’s also played criminals, drug addicts and a stoner musician, but has never played a detective before – “and I’ve never really wanted to,” he admits, “until I read this particular detective.”

“He’s not squeaky clean at all,” Sturgess adds. “He’s not James Bond. He makes some very tricky decisions that have a difficult impact on his life later on. But he considers himself to be a good family man, and that becomes an important part of the story because it’s his family he’s trying to save.”