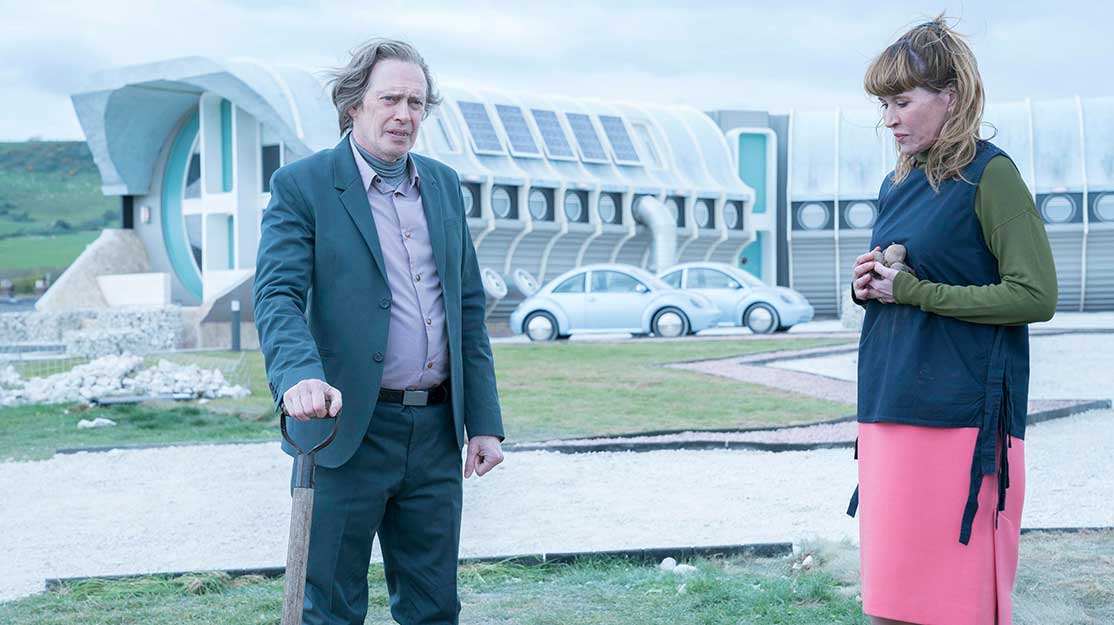 The work of renowned author Philip K Dick has inspired a new anthology series heading to Channel 4 in the UK and Amazon. Michael Pickard takes a look at the 10 imaginative stories that make up Electric Dreams.

Since Philip K Dick’s Electric Dreams was first announced in May last year, it seems not a week has passed without a new A-list actor, star writer or acclaimed director joining the anthology series.

Comprising 10 single films, each inspired by one of author Dick’s renowned short stories, a roster of leading British and American writers and directors have taken up the challenge to adapt the works for television.

Each story is set in a different and unique world, with some at the far reaches of the universe and others much closer to home. But while on the surface they may seem poles apart, they all focus on the importance and significance of humanity.

Here, DQ takes a look at the details of all 10 episodes, which are due to air on Channel 4 in the UK and Amazon in the US later this year.

Crazy Diamond
Boardwalk Empire’s Steve Buscemi plays Ed Morris in what is described as “the ultimate Philip K Dick comic film-noir nightmare.” Inspired by the story of the same name, the story follows average man Ed, who is approached by a gorgeous synthetic woman with an illegal plan that could change his life completely. He agrees to help – and then his world begins to crumble.
Starring alongside Buscemi are Sidse Babett Knudsen (Westworld, Borgen), Julia Davis (Gavin & Stacy) and Joanna Scanlan (No Offence). The episode (pictured top) is written by Tony Grisoni and directed by Marc Munden.

The Commuter
The morning commute is turned on its head in this mysterious tale from Bafta-winning writer Jack Thorne (National Treasure, This is England). Timothy Spall (The Enfield Haunting) stars as Ed Jacobson, an unassuming employee at a train station who is alarmed to discover that a number of daily commuters are taking the train to a town that shouldn’t exist. This one is directed by Tom Harper (War & Peace).

Impossible Planet
In an episode that promises two be out of this world, Jack Reynor (Free Fire) and Benedict Wong (Marco Polo) play two disillusioned, disenchanted and indifferent space tourism employees who agree to an elderly woman’s (Geraldine Chaplin, A Monster Calls) request for a trip back to Earth – the existence of which is a long-debunked myth. She appears easily confused, plus she’s rich – so, for the right payment, what’s the harm in indulging her fantasies? As the journey unfolds, however, their scam begins to eat away at them and they ultimately find themselves dealt a bittersweet surprise. Impossible Planet is written and directed by David Farr (The Night Manager) and based on the short story of the same name.

Human Is
Essie Davis (Miss Fisher’s Murder Mysteries) stars as a woman suffering in a loveless marriage who finds that her emotionally abusive husband (played by Breaking Bad star Bryan Cranston) appears to be a different man upon his return from battle – in more ways than one. With a cast that also includes Liam Cunningham and Ruth Bradley, this episode is written by Jessica Mecklenburg and directed by Francesca Gregorini.

Father Thing
The world is under attack in Father Thing as aliens quietly invade our homes. Charlie, played by Jack Gore (Billions), must make the most difficult decisions imaginable as he tries to protect his mother (Mireille Enos, The Catch) and the human race as he is among the first to realise that humans are being replaced by dangerous monsters. Greg Kinnear (As Good As It Gets) also stars in this instalment by writer and director Michael Dinner (Sneaky Pete).

Real Life
This future-set episode sees Anna Paquin (True Bloood) play Sarah, a police officer who shares ‘headspace’ with George (Terrence Howard, Empire), a brilliant game designer, with each pursuing violent killers whose plans could have shattering consequences. In a race against time, and sharing a bond that no one else can see, they learn that the very thing that connects them could also destroy them. Additional cast members include Rachelle Lefevre (Under the Dome), Lara Pulver (Sherlock), Jacob Vargas (Luke Cage), Sam Witwer (Once Upon A Time) and Guy Burnet (Hand of God). The episode is written by Ronald D Moore (Outlander, Battlestar Galactica) and directed by Jeffrey Reiner (The Affair).

The Hood Maker
Set in a world without advanced technology, mutant telepaths have become humanity’s only mechanism for long-distance communication. But their powers have unintended implications, and when the public begin to embrace mysterious, telepath-blocking hoods, two detectives with an entangled past are brought in to investigate. Richard Madden (Game of Thrones), Holliday Grainger (The Finest Hours) and Anneika Rose (Line of Fire) star in The Hood Maker, which is written by Matthew Graham (Life on Mars) and directed by Julian Jarrold (Becoming Jane).

Autofac
Set in a world where society has collapsed, a massive, automatic product-manufacturing factory continues to operate according to the principles of consumerism – humans consume products to be happy and, in order to consume continuously, they must be denied freedom of choice and free will. When a small band of rebels decide to shut down the factory, they discover they may actually be the perfect consumers after all. Juno Temple (Vinyl) stars as Emily, one of the rebels, alongside Janelle Monae (Hidden Figures) as Alexis, an Autofac representative. Jay Paulson and David Lyons also appear in the episode, which is written by Travis Beacham and directed by Peter Horton.

Safe and Sound
Annalise Basso (Captain Fantastic) stars as a small-town girl, already gripped with social anxiety, who moves to a big futuristic city with her mother, played by Maura Tierney (The Affair). Exposed for the first time to urban society’s emphasis on security and terrorist prevention, it isn’t long before her schooldays are consumed by fear and paranoia. However, soon finds guidance and companionship in the most unexpected of places. Safe and Sound is written by Kalen Egan and Travis Sentell and directed by Alan Taylor.