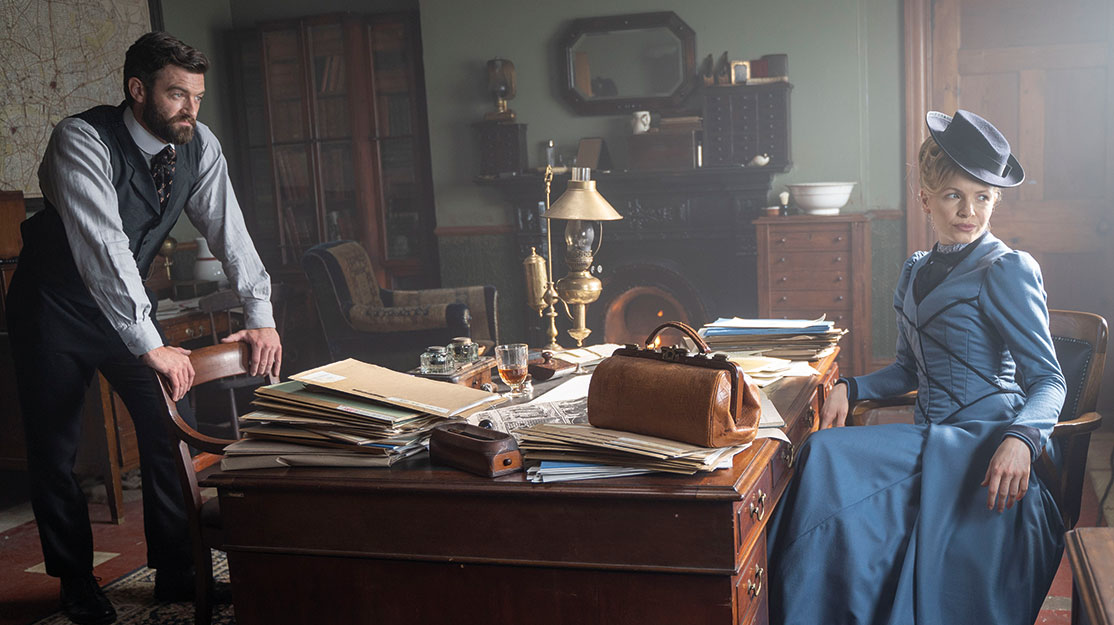 A modern take on a crime procedural that happens to be set in 1880s London? Welcome to the world of Miss Scarlet & The Duke.

Inside Cabinteely House, a grand country manor set in parkland south-east of Dublin, all the hallmarks and finishes of an exquisite period property can be found. In one room, an ornate chandelier hangs from the ceiling above a china tea set that adorns a wooden table. Gold curtains and a marble fireplace complement the painted blue walls.

Another room is decorated with patterned wallpaper and elaborate gold furniture. A portrait sits above the fireplace while the windows are framed by lace curtains and gold drapes.

Nearby, a film crew has crammed itself into the kitchen, setting up cameras to capture both sides of a conversation about to take place around a wooden table in the middle of the small room. A deep metal sink has been built beneath the window, while copper pots dangle above the stove.

At first glance around the set, Miss Scarlet & The Duke looks to have everything we’ve come to expect from a standard costume drama. But as creator and showrunner Rachael New attests, this isn’t your usual period show.

Described as a full-throttle series about the first ever female detective, operating in 19th century London, the show sees Eliza Scarlet take on her father’s private detective agency following his death, teaming up with drinking, gambling and womanising Detective Inspector William ‘The Duke’ Wellington to solve crimes in the murkiest depths of the city.

To create the series, New has blended her passions for watching costume dramas, writing crime shows and reading historical fiction to create a character she compares to Sherlock Holmes.

“But where Holmes is a superhero, I wanted to write a character that was a bit flawed, human and relatable,” she says. “Where Holmes would be celebrated for his brilliance, Eliza will have to prove herself a hell of a lot more to gain any kind of acceptance or respect, because our story is set at a time where women had little or no rights at all.

“This is the Victorian era, when women were meant to be submissive at home, not running around London solving crimes. As such, she would be seen as an oddity, an outcast or an embarrassment. But she is determined, she’s smart and she has a forensic mind.”

It’s her emotional intelligence and observational skills that make Eliza a great detective, New continues. But to operate beyond her limits in 1880s London, she leans on three male characters for support. First there’s the titular Duke, who as a young boy was mentored by Eliza’s father. As such, he and Eliza share a sibling bond with a bubbling attraction.

“So she has to manage him carefully. She does outwit him quite a lot and outmanoeuvre him but, equally, she does respect him. He doesn’t like the fact that she’s stepping on his toes. This is his world. As the season progresses, he does start to respect her more.”

Also supporting Eliza are Moses and Rupert Parker. Moses (Ansu Kabia) has come to London from Jamaica for a new beginning, but falls into a life of petty crime. After an inauspicious start, he forms an unlikely alliance with Eliza. “He essentially becomes her muscle, her minder,” says

New. “They bond because they’re both outsiders. They are both facing prejudice in very different ways.”

Meanwhile, Rupert Parker is a rich, privileged man who proposes to Eliza. To his relief, however, she turns him down because he doesn’t want to be married, only proposing under the pressure of his domineering mother Mrs Parker. “The reason why he doesn’t want to get married – as he reveals to Eliza – is he is secretly gay, something that in this period of time would destroy your life and your reputation. They bond over this and he invests in her agency,” New says.

A “mad Jane Austen fan” who also loves Charles Dickens, New was keen to create a diverse ensemble of characters, all of whom would be considered outsiders in 19th century London – whether that relates to class, gender, race or sexuality – making the series relatable to modern-day society.

“I had these characters in my head for a long time; it was like an itch I just had to scratch,” she says. “The first mission was to get it down on paper, which was the most fun I’ve ever had in my writing career, and then the second mission was to get it on screen.” She partnered with Patty Ishimoto (Rogue) at LA-based Element 8 Productions, who in turn brought in Bandidos Yanquis, 87 Films and A+E Networks International, which is also distributing.

Broadcasters airing the series include Masterpiece on PBS in the US, CBC in Canada, Seven Network in Australia, RTL Germany, OTE Cosmote TV in Greece and UKTV’s Alibi channel, which debuts the drama today, following deals with A+E International.

“It’s been a huge team effort to get this off the ground. We were a very happy, tight group, which has made it even more fun and even more special.”

Behind the camera for all six episodes is Declan O’Dwyer (Atlantis), who first met New via Skype and bought into her vision of a period drama that bucks the genre’s traditional tropes. “It’s just a great, rip-roaring adventure, but it’s grounded. Eliza is not a superhero,” O’Dwyer explains. “You invest in this character, and her adventures are a byproduct of her finding out who she is, surviving this world she’s in. That was one of the things that attracted me to the project.

“I see her as this Indiana Jones character,” he adds of Eliza. “A lot of scrapes, she only gets out of by chance or by fluke. She’s finding her way through and it’s often the mistakes that show the path forward.”

The case-of-the-week series contains lots of twists and turns, though each investigation ultimately leaves its mark on both Eliza and Duke. Storylines include a woman who claims her husband is innocent of murder, despite being found holding a bloody knife and standing over a corpse. Another sees Eliza go undercover with the suffragists women’s rights movement.

“Lots of crime shows leave me a bit cold when you could forensically take those guests stories out [and the characters wouldn’t change],” she notes. “I just wasn’t interested in that. I wanted something where the characters are invested in it. Because of that, we have lots of serial stories running through it. We have a lovely, overarching investigation over the season, which is whether her father died of natural causes or he was murdered. Then we have the lovely will-they-won’t-they story between Duke and Eliza.”

New has updated the language to avoid the series feeling “stuffy,” while the period element is further removed by a modern soundtrack that adds a new dimension to the era in the way Baz Luhrmann transformed Romeo & Juliet in 1996 or, more recently, Peaky Blinders has become the show every musician wants to lend their songs to.

Eliza’s late father, Henry Scarlet, appears in the series through flashbacks recalling his relationship with his young daughter. He is also viewed as a figment of older Eliza’s imagination, talking to her as she tries to solve cases.

“But because they’re emotionally driven, the flashbacks are not an issue,” says O’Dwyer about jumping between timelines. “They’re not just a device. There’s a reason for it and it comes from either what’s happened or what’s about to happen, so there’s a trigger. Then it becomes just a part of the story.

“Visually, it will look slightly different, but it’s quite a seamless transition. They’re not those nightmare flashbacks that are meant to jar you out of your sleep. It does move the story on. They always serve character – and if it does that, it’s a valid story device.”

A woman ahead of her time, Eliza is a mix of some of New’s favourite characters – Pride & Prejudice’s Elizabeth Bennet and Gone With the Wind’s Scarlett O’Hara – brought to life by Kate Phillips. “Eliza is the character I’ve always wanted to write,” she says.

Phillips says the script for episode one “was like nothing I’d ever really seen or experienced before when reading a script,” adding: “I’d never really met a character like her before. She’s so dynamic and she’s so different with every person she’s with. Excavating her and what makes her tick has been really, really fun.

“She does present as this somewhat refined Victorian lady, and I think that’s part of her. But she’s this really scrappy, feisty thing underneath, so she has to let loose. You want to see that.”

Phillips is no stranger to period dramas, having starred in Peaky Blinders, The Crown, Wolf Hall, War & Peace and the Downton Abbey movie. But one of the biggest appeals of Miss Scarlet & The Duke, was its central bunch of mismatched outcasts, with the fizzing chemistry between Eliza and Duke at its core. “There’s so much fondness there. She respects him as a detective and she’s just so eager to join in and be part of the club.”

Similarly to Phillips, Stuart Martin, who plays Duke, also has a history of starring in costume dramas, most notably Medici: Masters of Florence and Jamestown.

Playing a character from the wrong side of the tracks, Martin says Duke goes on a progressive journey during the series, accepting Eliza’s top-class detective skills and building their partnership beyond their childhood relationship.

“Eliza’s the brains and I’m the brawn,” he says, sporting a full beard that took more than a month to grow for the part. “He needs her and she needs him, that’s what’s lovely about it. They’re a crime-fighting duo. With his brawn, he’s useful in certain situations and, in the same way, with her brain and way of getting into things, they match up.”

Martin believes the first two Miss Scarlet scripts are among the best he’s ever read. “They’re so fantastically good,” he enthuses. “They’re really electric and different. The minute you start reading and think you know where it is, it just goes in a different direction. It’s very exciting.”

It the roundedness and complexity of the show’s main ensemble that makes Miss Scarlet & The Duke stand out from so many other crime procedurals, while its period setting provides a backdrop to the very modern themes and issues the characters confront across the six episodes, with New brimming with ideas for what might wait in store should it land a second season.

“These characters are all fish out of water, struggling to break barriers and survive in a world that treats them as less than they are,” she says. “Ultimately, this is a crime drama with lots of lovely comic moments. It just happens to be period.”