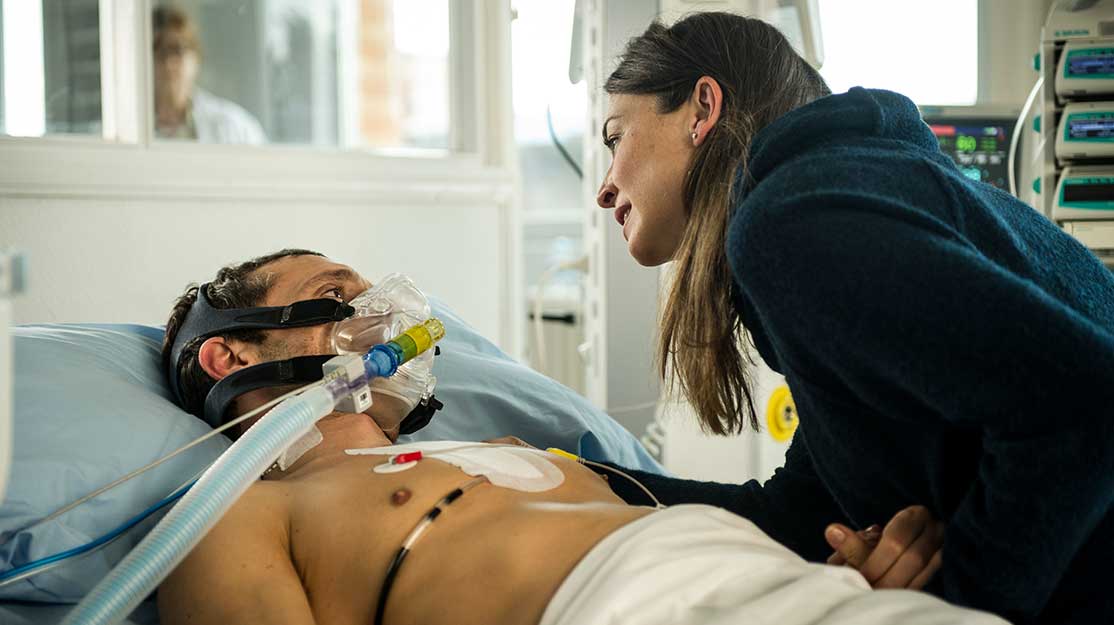 Matters of the heart concern more than love in Spanish psychological thriller Pulsaciones. DQ speaks to one of its creators to find out what keeps the series beating towards its conclusion.

Genre crossovers are nothing new in television. From forthcoming sci-fi western Westworld to period crime dramas Ripper Street and Peaky Blinders and comedy-horror Ash vs Evil Dead, the small screen is constantly finding ways to mash up traditional styles to create new stories.

Another example is Pulsaciones (aka Lifeline), a Spanish drama that is described as a psychological thriller with elements of romance, the supernatural and traditional medical drama, with scenes inside an operating theatre serving as the prologue for the resulting 10-episode series.

In particular, it explores the issues surrounding so-called ‘heart memory’ – when a heart transplant patient begins to relive the memories and experiences of the donor.

Pulsaciones tells the story of the dangerous investigation carried out by a neurosurgeon to solve the mysterious death of his heart donor, using only the hints that, in the shape of memories and dreams, the heart sends to its new owner. His disturbing nightmares will also cause his marriage to fracture as he is inexplicably attracted to another woman.

The series, due to air later this year, was created by writers Emilio Aragón, Carmen O Carbonero and Francisco Roncal, with Aragón, David Ulloa and David Victori directing. The show is distributed internationally by Imagina International Sales.

Aragón says the creative team had been toying with developing a fantasy series for a while, “then one day we read an article about a French investigator who had been studying the memory of the heart and immediately we thought, ‘We have a story here!’”

He continues: “The appeal of the show is in the idea of the heart’s memory. But the most interesting part, from a creative point of view, was the chance to cross a thriller with something so related to human emotion, as is everything that is carved in our hearts, and the power it holds.”

Aragón says he and the rest of the creative team “read everything that fell into our hands” on the subject of heart transplants and the phenomenon of transplant recipients adopting some of the characteristics, personality traits or desires of their donors. Reports suggest some heart patients have developed a sweet tooth, specific food cravings and adopted new musical tastes following their transplants.

“We also watched a lot of documentaries and scientific programmes,” he adds. “Regarding scientific evidence, the show has just enough. The subject was so juicy that we preferred to unleash our imagination within certain parameters.”

Aragón and Carbonero initially teamed up to start writing a story around the premise of the memory of the heart, before Rocal joined the team.

“For a year-and-a-half it was a true tour de force,” Aragón says. “There were dozens of versions of the story and we were very self-critical until we found the right one. Then, once the series was conceived, other writers joined us to develop the main arc of the plot and to outline the first 10 episodes.

“The first four episodes were written by the three of us and, from there on, Carmen and Francisco took charge of writing the dialogues and co-ordinating the rest of the episodes, with the participation of other writers for certain episodes, while I was in charge of directing the series.”

Behind the camera, Aragón says he wanted the series to be as realistic as possible: “The visual narrative style was something that was debated a lot between the art director, the first assistant director and myself. Once we defined the style, I had a meeting with the other two directors that were to accompany me on this journey and I shared it with them. The collaboration has been very easy and smooth.”

The writer/director says the 10-part story format, rather than an episodic case-of-the-week structure, gives the series more strength – but he admits the production was not without its difficulties.

“The whole project has been a challenge,” he says. “I very much enjoy being involved in the creative and production process. But if I had to choose one, the blank piece of paper is what stimulates me the most.”

Aragón is now looking ahead to a possible second season, at a time when the Spanish TV drama sector is on the rise after the country’s recent financial troubles.

“The Spanish drama industry during the past few years has grown well,” he notes. “There is a lot of talent and very good professionals – just look at the number of formats and series being exported. The networks – in this case, Atresmedia – are also exploring new paths within this industry. Lifeline is proof of it.”

For Nacho Manubens, the senior VP of drama at Antena 3 owner Atresmedia, the appeal of Pulsaciones was its unique concept.

“This intriguing story about a man who, after receiving a heart transplant, can’t get away from the donor’s issues was a very promising beginning,” he explains, adding that this will be the latest thriller to air on Antena 3 in what has become a successful genre for the network.

“At Atresmedia we have been quite successful with our thriller slate in the last few years. We had crime hits like Bajo Sospecha and Mar de Plástico, and the prison drama Vis a Vis. In addition to having a strong thriller structure, Pulsaciones has a romantic story and a slight supernatural element that brings something fresh to our slate. New approaches to the genre are always exciting but also risky, since we can’t predict how audiences will react.”

As such, Manubens says he works closely with producers to help them reach the show’s potential, all while respecting their vision.

“We are part of every key decision but once we have a good sense of what the show we are building is, we tend to stay away from the set,” he adds.

“Our goal is to keep having a wide scope of shows, from comedy to thriller to dramas, so we are always excited about the possibility of offering such different stories to our audiences.”