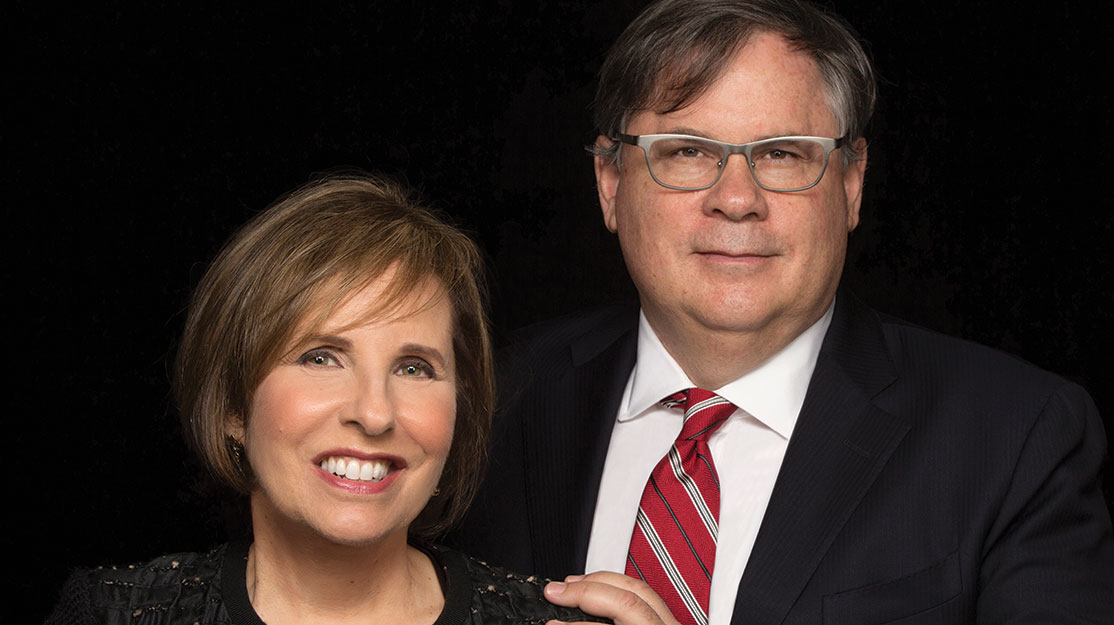 Michelle and Robert King reflect on seven years as showrunners of hit US drama The Good Wife and reveal how they overcame early setbacks to create one of the biggest shows on television.

When the curtain came down on the 2015/16 US TV season at the end of the summer, married showrunning duo Michelle and Robert King had overseen 35 hours of programming in a single year.

The creators of The Good Wife concluded the award-winning CBS legal drama with its seventh and final season this May, before launching their new 13-part political satire BrainDead on the same network the following month.

“It’s more than we’ll ever attempt again,” says Robert of the pair’s hectic year, before Michelle adds: “But it just felt like absolutely the right time to do BrainDead. You couldn’t ask for better timing than an election year, so we dove in.”

The series stars Mary Elizabeth Winstead as Laurel, a young, fresh-faced Capitol Hill staffer who discovers that the government has shut down – and bugs are eating the brains of congress members and Hill workers.

“It was harder to write, due to its serialised nature, but much more fun to edit than The Good Wife,” Robert says of the new show. “I think that’s because the jokes are more obviously placed. They’re not as subtle. We know when something hits in the BrainDead editing room, whereas in the editing room for The Good Wife, we were always feeling our way towards it.”

Michelle admits to being slightly ambivalent about the end of The Good Wife, something CBS confirmed after the Kings had already revealed their intention to step down as co-showrunners.

“I very much miss the characters and I miss the people we were able to work with on a daily basis,” she explains, “but I feel very grateful we were able to bring the story to a close the way we wanted to.”

Robert continues: “On the human side, we stayed friends with everyone and I have a feeling that if this had dwindled on for another year or two, we’d have ended up hating each other.

“We knew from the second season that if we ever got picked up for more seasons, we’d only go seven seasons ourselves.”

The Good Wife follows Alicia Florrick (played by Julianna Margulies), who returns to her career as a defence attorney after a very public sex and political corruption scandal lands her husband in jail.

The Kings say the fact they had an ending point in mind made the drama better, as it meant they could tell a complete story instead of having to constantly drive characters forward towards a conclusion that never gets any closer.

“The only way you can stay sane is this idea that you’re telling a story that has a beginning, a middle and an end,” says Robert. “I think most people would say the fifth season was one of our best. One of the reasons it rose up so well is we could turn over a lot of plot cards, but also we knew we were in sight of the end game for (main character) Alicia. That allowed us to take more chances and tell more interesting stories. It’s not just taking jabs at life and trying to show something that may go on for 20 years.”

Coming from a career in features, the Kings didn’t find instant success in television. Legal drama In Justice, starring Kyle MacLachlan, ran on ABC in 2006 but was cancelled after its initial 13-episode run. The following year, the same network then rejected their pilot called Judy’s Got a Gun, which starred Louise Lombard as a woman balancing her life as a single mother and a detective who solves bizarre suburban crimes. The Good Wife then debuted in 2009.

“A lot of it is luck,” Michelle says of the TV drama business. “I liked In Justice. Those actors were terrific but, for whatever reason, it didn’t click at that time on that network. You just have to try as hard as you can every time you get a chance.”

Robert adds: “The lessons from those experiences kicked us in the ass so we knew that if we ever had the chance to do another show, we would grab it by the horns right from the beginning and never let up. The only thing we learned was not to let the show drift, to really grab hold of it and make it different right from the word go. That’s a good lesson to take into life and you probably need failures to get you there to do it.”

Robert attributes much of the credit for finally striking television gold with The Good Wife – which won five Emmys and one Golden Globe, among other awards – to the cast, which was headed by Margulies alongside Josh Charles, Christine Baranski, Archie Panjabi and Chris Noth.

“It was Julianna in tandem with a premise that people found interesting,” he says. “The premise brought true sympathy right from the off and engaged with a certain audience that wanted to see empowerment. On top of that, we just had a really good cast. The writing possibly helped it get into another year or two later on, but what started it off and made it commercial was that cast and that premise.”

The Good Wife employed a team of seven writers who scoured the news in the hope of finding stories that would make them stand out from other shows such as Law & Order. They also employed three staff lawyers to ensure the drama stayed on the right side of reality.

“So when we saw them getting red-faced and screaming at each other, we knew we had a fairly good story,” Robert reveals, “because if it created that much argument, you knew you were hitting a very interesting grey area of the law, which is what we really love.”

But will legal series continue to be one of the staples of television drama? The husband-and-wife team beg to differ. “I believe legal stories will continue to be popular,” Michelle insists. “They’re evergreen because there are high stakes and you can tell interesting human stories with a procedural element to it.”

But Robert is unconvinced: “Can I disagree with Michelle? I’m not sure if they will continue. It’s a hard form to make interesting and I worry it will fall back to who gives the best speech in court. I don’t think I’ll ever watch those shows again. Courtrooms can also be tedious.”

The Kings will be back in court, however, following the announcement of a Good Wife spin-off that will launch on SVoD platform CBS All Access in February 2017. Returning as co-showrunners, they will oversee the as-yet-untitled series, which sees Baranski reprising her role as Diane Lockhart alongside Cush Jumbo as Lucca Quinn and Sarah Steele’s Marissa Gold.

The series will open one year after the final episode of The Good Wife and will revolve around an enormous financial scandal that has destroyed a young lawyer’s reputation, while simultaneously wiping out her mentor Lockhart’s savings.

Forced out of their firm, Lockhart & Lee, they join Quinn at one of Chicago’s pre-eminent law firms, where Gold begins as Diane’s secretary and soon discovers a passion for investigating.

It is produced by CBS Television Studios, Scott Free Productions and the Kings’ own prodco King Size Productions, and distributed by CBS Studios International – all of which formed the team behind both The Good Wife and BrainDead.

“There were two things that got us intrigued by it,” Robert says of the new show’s origins. “One is that Christine and Cush wanted to do it. Christine obviously has been there all seven seasons (of The Good Wife) and we’ve become close to her, while Cush, who we only met a year-and-a-half ago, we just fell in love with. Their involvement made us more intrigued about how this would turn out.

“The other thing was that we had created a very close family of crew, craftsmen, production designers, ADs, directors of photography – all these people created this really great unit and we had almost no one leave over seven years. In fact, some of the crew members met their loved ones at some of our cast parties and business parties, so it felt like a good idea to keep it going.”

Enjoying married life for 30 years, the couple reveal they have no fixed boundaries in how they split their showrunning duties, while Michelle admits their work and personal lives do have a habit of overlapping.

“It’s all hands on deck most of the time,” Robert reveals. “It’s just that when I might be in the editing room, Michelle will go to the casting sessions and so on. Michelle’s involvement is much more in wardrobe, the look of the show, in production design, those elements – and I bring the food!”

For their next project, the Kings are developing a pilot for Amazon called Vatican City. It tells the story of a new Pope who, knowing he cannot appoint any women as priests, decides to buck tradition by hiring a female American newsreader to become his spokesperson.

But with new dramas coming in 2016/17 including adaptations of films such as The Exorcist and Lethal Weapon and a reboot of detective classic MacGyver, are broadcasters still willing to take risks on original stories?

“There’s a worry that TV might start following what the feature business has done, pursuing only pre-existing ideas,” says Robert. “TV is changing almost year to year and it’s amazing to see – just over the course of The Good Wife – how ratings don’t seem to matter as much as they did, the advancement of streaming and Netflix being a massive producer of new content. And now writers are so in demand that it’s sometimes even hard to put a writing staff together. So I’m a little worried there might be an emphasis on pre-existing content – and the better those shows do, the more worrisome that becomes, because success is the best teacher of what to do next.”

He adds: “But that’s not what we’re doing. We have a production company and the next show we’re doing is Vatican City. So we’re trying to pursue original content. And most of the showrunners we admire – the likes of Vince Gilligan (Breaking Bad) and Matthew Weiner (Mad Men) – are still pursuing original content as well.”