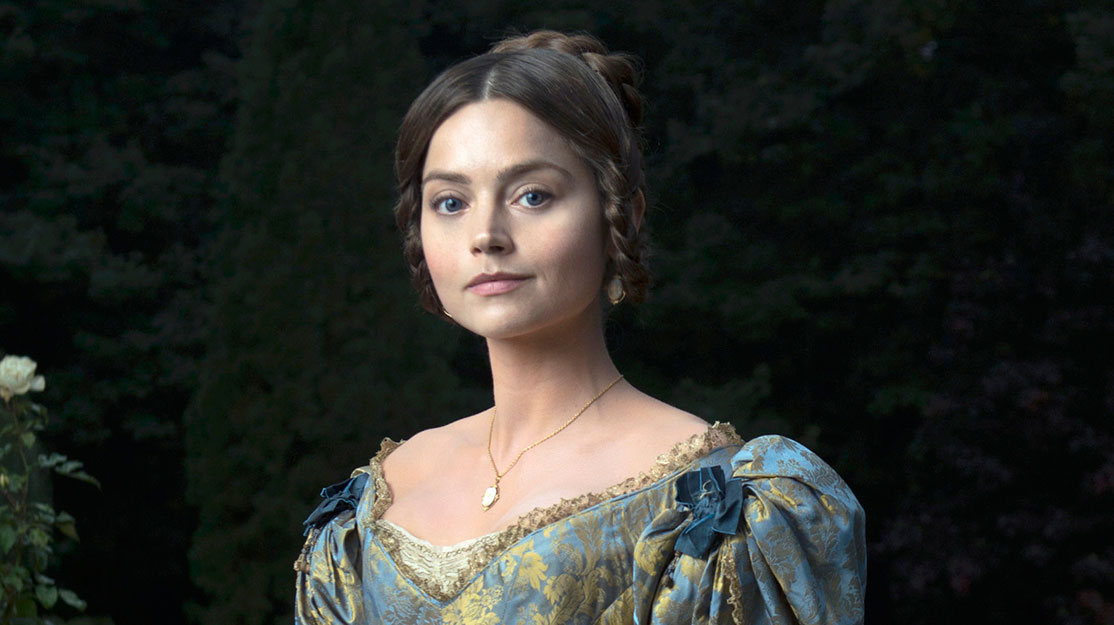 If the mere mention of Queen Victoria conjures up the image of a “boot-faced old bag in a bonnet,” an eight-part drama starring Jenna Coleman (pictured above) could be about to change perceptions of Britain’s second longest-reigning monarch.

Previously travelling the galaxy as Doctor Who’s companion, the actor’s first starring role away from the TARDIS is as the young queen in an ITV drama simply titled Victoria, which opens with her ascension to the throne at the tender age of 18.

The series then follows the monarch through the first three years of her reign, including her courtship and marriage to Prince Albert (played by Tom Hughes).

While being a teenager on the throne might have thrown up some challenges for Victoria, series creator and writer Daisy Goodwin also faced a steep learning curve – this is her first ever screenwriting commission.

But she describes the experience as “a revelation, an education and a great privilege,” adding: “To do something you feel very passionately about and have it realised so splendidly is something most writers spend their entire career waiting for and it’s happened to me right out of the gate. I’m totally thrilled. And I find none of it boring because I’ve never done it before.”

Goodwin reveals her “affair” with Victoria started when she was 18 and studying history at Cambridge. “I was reading her diaries and came across this extraordinary entry that described how head-over-heels in love she was with Albert and it made me laugh,” she recalls. “I had a moment where I realised she was a teenager who was having to learn how to be queen in the full glare of the public eye.”

Goodwin went on to have a successful television career, not in drama but in the factual space, first with Talkback Productions, where she devised shows such as Grand Designs and How Clean is your House?. She then founded Silver River Productions, before her first novel – the Victorian era-set My Last Duchess – was published in 2010. Her second, The Fortune Hunter, landed in 2014.

“I was reminded what an interesting character Victoria was – and at the same time I have a daughter who’s a teenager and the same height as she was, just under five foot. We had a huge row one morning and I looked at her and wondered what would happen if she woke up tomorrow to find she was the most powerful woman in the world. I thought that was the starting point for a fascinating drama and I like the idea that Victoria’s a teenage queen with all that that implies.”

In particular, Goodwin says she was drawn to the idea of making a historical drama with wit, verve and humour. “Just because it has bonnets doesn’t mean it has to be stuffy in any way,” she asserts. “I’ve tried to tell the story as it would have unfolded at the time. Our perception of Victoria is always as a boot-faced old bag in a bonnet, which is the old Victoria, but in her early years there was huge unease about whether this little girl could take on this hugely important role. That’s what I’ve tried to convey in the early part of the series.”

As a historian and Victoria expert, it would be understandable if Goodwin felt pressure to ensure the series’ factual accuracy – but she says she isn’t fazed by the prospect of criticism for any dramatic licence in her scriptwriting.

“Obviously I’ve fiddled a bit with chronology, but dramatically it was necessary,” she says. “I know enough about the history to know what I’m doing. Where I’ve changed things, I’ve done it for dramatic effect. But I have been faithful to the emotional truth of the characters I’m writing about. So all the real people, that’s who they were and, as much as possible, I’ve tried to use their own words. When people see episode one, the things they think I’ve made up are the true bits.”

UK broadcaster ITV was obviously impressed by Goodwin’s pitch, handing out a series order despite only one script being written at the time. Mammoth Films (Poldark) then came on board to produce, with Damien Timmer, Goodwin and Dan McCulloch executive producing. ITV Studios Global Entertainment is distributing Victoria worldwide.

Perhaps the biggest piece of the jigsaw, however, was who would play Victoria – the young woman who went on to rule for 63 years and was Britain’s longest-serving monarch until she was overtaken by Elizabeth II on September 9, 2015.

“One of the things we had to get right was Victoria, who was really small and very diminutive – something that hasn’t always been captured in previous translations of her life,” Timmer says. “But it’s one of the things that give her such huge power – she’s this small dynamo. From the beginning we agreed we were looking for a real powerhouse of an actress and, in my mind, Jenna was the obvious person.

“Doctor Who is always shrouded in secrecy and it wasn’t clear whether she would be available. While we had Jenna as our holy grail, we did do some investigating elsewhere – but when we discovered it could work with Jenna, we were utterly thrilled because it’s impossible to imagine anyone else in that part now. Victoria’s a real force of nature – when she was happy she made the room laugh, but when she lost her temper it was probably rather scary. Jenna conveys that in a way that always feels truthful. She manages to be both very sympathetic and properly brutal.”

Goodwin, who describes Coleman as “miraculous,” adds: “Our Victoria is a heroine but she gets things wrong as often as she gets them right. We’re lucky to have an actress in Jenna who can do bad things but makes you realise why she’s doing them. You understand where she’s coming from and you feel towards her like you do your teenage daughter.”

While crowning Coleman as Victoria was a major coup, the rest of the production wasn’t without its challenges. In particular, production designer Michael Howells was tasked with recreating Buckingham Palace, with numerous staterooms, ballrooms and a throne room, as well as quarters for Victoria and her family and the downstairs servants.

“It’s boring to go on about how big a set is but the detail and scale are truly impressive,” Timmer says. “That’s one of the distinctive things about this – the central character’s home is also one of the biggest palaces in the world. You can’t cheat with that, you can’t hide. You’ve got to do it properly. It’s a big place to fill and you’ve got to believe the life of the palace. It’s stuffed to the gills with courtiers and when there’s a ball, these are big spaces to fill. But it’s also a home, somewhere intimate scenes can play.

“The exterior of Buckingham Palace now is not at all what it looked like in Victoria’s reign, which is the key to the show. You think you know what the story will be, but think again. The truth is much more interesting than the story we all think we know.”

Timmer also praises Goodwin – a self-confessed super fan of another ITV period drama, Downton Abbey – for the cast of characters she has built around the young monarch, with actors including Rufus Sewell, Alex Jennings, Paul Rhys, Peter Firth and Catherine Flemming among the ensemble.

“One of the challenges Daisy set herself was portraying the world around Queen Victoria,” he explains. “You have her family, the world of the servants below stairs and all manner of important dignitaries. It’s a big cast and Daisy has managed to make sure all the actors are very well served. It’s rare to encounter a cast as jolly as this lot are because although it’s an ensemble, they really feel they’re getting enough attention because the scripts managed to serve them all very well.”

But what is it that sets Victoria – due to air later this year on ITV and in 2017 on US network PBS – apart from other period dramas?

“Unlike most costume dramas where it’s the woman trying to get the attention of a man, in this you’ve got a woman who from the beginning is the boss,” Goodwin says. “And that makes it different to pretty much any other costume drama out there. Plus it’s a story people think they know but they don’t know. There’s also enough real history there for people who are interested in the period, so I hope it will satisfy on those two levels.”