The Morning Show
The flagship series of AppleTV+ when the subscription service launched in 2019, this show paired Jennifer Anniston and Reese Witherspoon as the hosts of a morning news programme. Told from the perspective of their characters, two complicated women navigating a minefield of high-pressured jobs and crises in their personal and professional lives, the series examines the power dynamics between men and women, and women and women, in the workplace.

Carlo Dusi, exec VP of commercial strategy, scripted, at Red Arrow Studios International, says: “Despite some rather mixed reviews on release, Apple’s The Morning Show delivered gripping drama, phenomenal acting, and constantly surprising plot twists, all the while capturing the #MeToo spirit like no other show on our screens and offering an intelligent and multi-layered point of view into gender politics in the workplace, all of which makes it essential viewing for our times.” Succession
HBO’s latest critical success, Succession charts the turbulent fortunes of media mogul Logan Roy (Brian Cox) and his four children as they battle for control of one of the biggest media and entertainment conglomerates in the world. The series, which won the 2019 Emmy for best drama series, blends dramatic and acerbic writing to examine themes of power, politics, money and family.

Emmanuelle Guilbart, co-CEO of APC Studios, says: “This isn’t the most original suggestion since the series has already gained much deserved hype and acclaim, but if there’s any chance you haven’t seen it yet then now is the time. It’s a brilliantly executed show and a great example of a series that makes you love and root for bad people. Unbelievable is also a really worthwhile series. This topical show is a renewal of the true crime genre and a sensitive exploration of the complexities of sexual assault.” The Fall
A psychological thriller that pits a talented female detective, played by Gillian Anderson, against Jamie Dornan’s serial killer who is stalking his victims in and around Belfast. The BBC series ran for three season between 2013 and 2016.

Philippa Collie Cousins, drama commissioner for UKTV, says of the series: “I couldn’t watch The Fall on transmission – it scared me too much. I waited until all three seasons had finished and then devoured it over 10 days. It seems to take three ingredients at their rawest. Firstly, it really convinces you that it is based on genuine police detection and the effort to catch the Belfast strangler and his weird MO are scary because they are twisted enough to be real-life. It makes an effort in its dialogue to create genuine depth of character and the casting is pure 1950s with two movie stars playing the leads.
“Alan Cubitt’s writing is just superb. He crafts the perfect triangle of character, thriller and motive. Motives are given to both the criminal (Dornan) and those investigating the crime (Anderson). It is Stella Gibson’s humanity pitted against Paul Spector’s lack of humanity that provides the cat-and-mouse motor. However, it is always rooted, but rooted in such a complicated personal landscape that, season by season, episode by episode, you as the audience play the psychiatrist, stripping them down layer by layer until you feel that you know both of them so well. This Hitchcockian touch is masterly. As a fresh study of a woman in a male environment, it is a modern classic.” 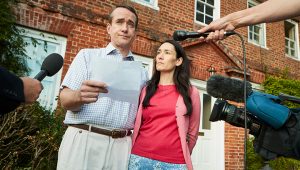 Quiz
A three-part drama commissioned by ITV in the UK and US cable channel AMC, Quiz dramatises the notorious ‘coughing’ incident that took place on the UK version of Who Wants to be a Millionaire? in 2001, when former army officer Major Charles Ingram, his wife Diana and an accomplice, Tecwen Whittock, were accused of cheating their way to winning the gameshow.

Theresa Wise, CEO of the Royal Television Society, says: “The show I have loved recently is Quiz. Apart from feeling like a mischievous inside track into telly-land, it combined immense humanity, humour and pathos. I am a bit of a quiz addict, like many Brits, so it is immensely relatable. Plus, give me a good court room scene or scenes and you’ve got me. 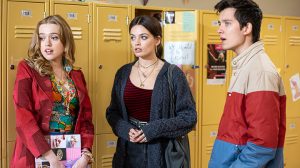 Sex Education, Back to Life and more…
Tony Wood, founder and co-CEO of producer Buccaneer, says: “This has been the year of Chernobyl, Fleabag season two and a brilliant season of Line of Duty. I’d also thoroughly recommend Sex Education [pictured] and Back to Life. Both these shows were brilliantly insightful about character and the emotions that confront them. They constantly surprised and created visceral reaction that lingered long beyond the programme.”