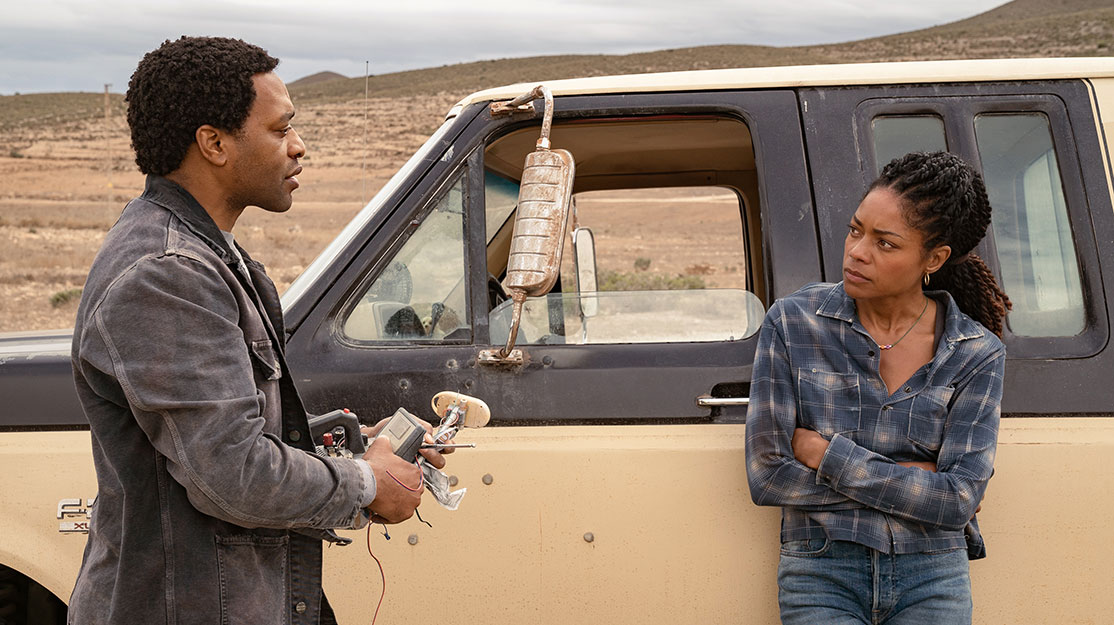 Writers and executive producers Alex Kurtzman and Jenny Lumet tell DQ about their latest collaboration – updating Walter Tevis’s classic sci-fi novel The Man Who Fell to Earth – working with an all-star cast and why humour is the show’s secret weapon.

Having partnered on Star Trek: Discovery and the upcoming spin-off Star Trek: Strange New Worlds, Alex Kurtzman and Jenny Lumet have a history of asking big questions about contemporary society against the backdrop of strange alien landscapes.

Now with their latest collaboration, The Man Who Fell to Earth, the writers and executive producers look closer to home with a story that has taken on new meaning in the wake of the Covid-19 pandemic.

Inspired by the Walter Tevis novel of the same name and the 1976 feature film adaptation starring David Bowie, the series follows an alien character, Faraday (played by Chiwetel Ejiofor), who arrives on Earth at a turning point in human evolution and must confront his own past to determine our future. Naomie Harris plays Justin Falls, a brilliant scientist and engineer who has to conquer her own demons in the race to save two worlds.

Premiering on Showtime in the US on April 24, the series was among the special screenings at French television festival Series Mania this week after its world premiere at SXSW earlier this month. Fans eagerly awaiting the show’s launch can already see the first five minutes of episode one, in which Faraday holds court in a packed Royal Albert Hall and asks, “How did we get here?” before recalling his journey to Earth from the far reaches of space.

Kurtzman and Lumet’s involvement in the project began when executive producer Sarah Timberman, who had acquired the rights to the property, asked if they would be interested in turning Tevis’s story into a series.

“I said yes without thinking at all, and Alex was like, ‘Hmm,’ only because he knew what a completely insane beast it would be,” Lumet recalls. “Also, with everything that was going on in the world, we’re really at the place of asking who are we? How did we get here? What can we depend on? As writers, the only thing you can do is write your way through those questions. You don’t land on any answers, but sending the questions out there, for me, was extraordinarily helpful in a time of weirdness.”

The pair, who also collaborated on Silence of the Lambs prequel Clarice, began writing the series in early 2018, before the pandemic began. The project was first in development at US streamer Hulu and then moved to CBS All Access before landing at sister network Showtime. Paramount+, which has since replaced CBS All Access, will carry the show internationally.

But just five scripts into the season, the Covid-19 pandemic hit, “so everything stopped,” Kurtzman says. “When you go through an experience like that, you’re looking for the silver lining wherever you can find it, and the silver lining for us was that the pandemic allowed us to stop and take a breath without feeling the freight train of production bearing down on us. It forced us to step back and ask some larger questions about the story that we were telling, particularly given what was suddenly happening around us.”

As a result, new characters were added, as well as new ideas, connections and plotlines that run through the story. Without that chance to reassess the scripts, “I don’t know if the show would have happened, to be honest with you,” Kurtzman admits.

“The pandemic certainly made me and Alex think about what was frickin’ important,” Lumet continues. “When we read what we’ve written and we sound really clever, we immediately know we’re complete assholes and we have to throw it away. It forced us to be honest and as brave as we could be. We have families, we were thinking about our kids. You think about your life and you think what’s important and what matters. That really made us lean into the human relationship part of this show. It brought the emotional, human and relationship part of this show to the forefront in a way I don’t know would have happened had it been business as usual, whatever that means.”

Using both the book and the film as the basis of the series, Kurtzman and Lumet took the spirit and ideas of each and brought them into their initial discussions, though they were keen to avoid repeating anything that had been done before.

“It did not feel like this particular moment in time when people were living in a state of fear would be the best time to tell a story about an alien who comes to save his planet and then fails abjectly and more or less disappears as an alcoholic,” Kurtzman says. “That being said, that was the story that Walter Tevis wrote, and we needed to honour it, but we needed to build on it. The show takes you to some very dark places and to some very light places and, ultimately, our intention was to be a mirror to what was happening around us. But we did not want to make a show that felt so wildly depressing that it didn’t affirm what was best about human beings.

“The only way to really get to what’s best about human beings is also to portray what’s worst about human beings and to give the audience the tools to decide where they stand in relation to that question,” he adds. “It was less about moralising or making a show where we want you to eat your vegetables or a lot of political commentary – although there’s certainly a lot of politics in the show – and more about saying, ‘This is the state of the world as we see it right now, in all of its beauty and wonder and glory and mystery and imagination and surprise and discovery and in all of its venality, in all of its ugliness and in all of its danger.’”

Key to that conversation is Justin, who is struggling with her own state of mind and looking for a way to find herself again. It’s a similar case for Faraday, Justin’s father Josiah (Clarke Peters) and Thomas Newton (Bill Nighy). The cast also includes Jimmi Simpson, Rob Delaney, Sonya Cassidy, Joana Ribeiro, Annelle Olaleye and Kate Mulgrew.

With Justin and Faraday as viewers’ entry points into the story, the series also plays with structure in a bid to stay ahead of the audience.

“The minute you start to see the formula and you’re like, ‘I kind of know where it’s going,’ even if it’s really well executed, there’s something about that that takes the surprise or the engagement away from me fully,” Lumet says. “Part of the gift of time we had to write this was we really got to think about a superstructure that would hopefully surprise people at every step of the way. Yes, you’ll be following their stories, but you will also be following many other character stories.”

As evidenced by the first five minutes, The Man Who Fell to Earth blends as dazzling array of visual effects with real locations. Produced by CBS Studios in association with Secret Hideout and Timberman/Beverly, the series was shot in London and Spain, where multiple worlds were constructed both on Earth and for Faraday’s home planet. The show is distributed internationally by Paramount Global Content Distribution.

“Jenny, [fellow showrunner and writer] John Hlavin and I and our writing staff had spent so much time building, the biggest thing was making sure the micro nuances weren’t falling away to the bigger things,” says Kurtzman, who also directs the series. “I knew that, at the end of the day, if we had amazing spectacle but the characters weren’t really singing, it wouldn’t work, so first and foremost it was about locking in with our characters, which meant locking in with our actors.

The show’s lead actors liked to prepare in different ways. “Naomie does not like to rehearse at all, but Chiwetel wants to rehearse every single moment,” says Kurtzman, who found those opposing approaches created a “special” kind of chemistry on set. “You see this collision and friction and energy that’s going on between them. Part of the job [of director] is just to create the environment for that magic to happen,” he notes.

With so many deep-seated themes at the heart of the story, another challenge was to ensure the series still stands up as a piece of entertainment.

“Maybe our secret weapon is humour,” Kurtzman says. “There is a melancholy that the show carries because it’s carrying the DNA of the [source] material. But because Jenny and John and I and everybody wanted to ultimately do a show that shows the best of humanity, the best way to really take those messages in is to make people laugh. In the spirit of being very unexpected, which is what we tried to do at every turn on the show, there’s so much humour.”