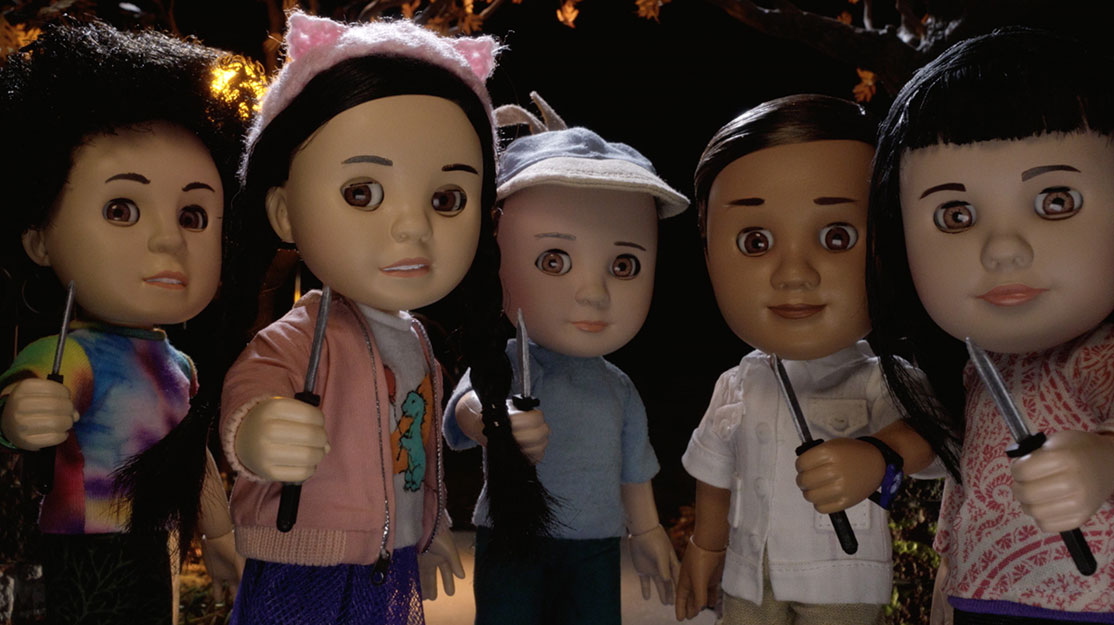 In his two live-action series, Patriot  and Perpetual Grace, Ltd, creator Steven Conrad sought to skewer the spy and crime noir genres respectively. Now with his latest project, Ultra City Smiths, the showrunner has pulled together elements of film noir, comedy, music and dance and wrapped them up in a murder mystery – which plays out in a world populated by baby dolls.

The stop-motion animation series, which debuted on AMC in the US this week after its launch on AMC+ in July, centres on an investigation into the mysterious disappearance of Ultra City’s most famous magnate, Carpenter K Smith (voiced by Kurtwood Smith). Two intrepid detectives – rookie cop David Mills (Jimmi Simpson) and Gail Johnson (Da’Vine Joy Randolph) – are then tasked with breaking the case, rallying to fight against their city’s dangerous corruption in the pursuit of a gentler place to call home.

A sprawling metropolis, Ultra City appears to be a bleak place to live that only becomes more depressing when Smith, the city’s “last great hope,” is brutally gunned down. The police investigation then intersects with the stories of numerous characters – among them Street Hustler Boy ( Damon Herriman), Lady Andrea the Giant (Bebe Neuwirth) and Rodrigo Smalls (Luis Guzmán) – to take viewers into this visually eye-catching and extraordinarily detailed world.

Conrad likens the plight of the characters to those facing people in 1980s New York, on which Ultra City is modelled, when residents didn’t feel supported by any form of government.

“It was rough,” he says, speaking as part of the show’s C21 Screenings digital premiere. “But at the same time, people had families and thrived. They fell in love and fell out of love, and had daily acts of heroism demonstrated to them.

“Because we can control this world [of Ultra City] and make it as big or as small as we would like, we can try to be very good at both of those things: to have a noir story where we take the local government to task for its wholesale corruption, but then also spend time with a smaller set of characters, whose lives have been turned upside down by violence and who are also struggling on a daily basis to try to find peace, happiness and safety in their own communities.”

Working with a familiar of roster of actors, Conrad’s decision to make an animated series came from his desire to have more control over every aspect of the project, from a character’s walk to the way clouds move across the sky.

“My walk of life is to film action, and it doesn’t mean one thing. I’m filming art. And the art of moving these figurines around is a long, honed craft for a small field of people that can be very beautiful in the way our characters sigh, gasp, walk, lumber, hesitate, stalk or nap,” he explains. “It all has to be delivered from me to another artist to the audience. Every footstep is considered. I wanted to get a little closer to that highly curated piece of art. Nobody else is really doing it.”

But what about those baby dolls, which have been modelled and dressed to portray every type of character imaginable in Ultra City? Conrad reveals there was an extensive research and development process to find the right dolls for the series – ones in which viewers could still see the baby in the grown-up for the show’s unique brand of comedy to work.

The answer came when his creative partner Jeff Dieter was constructing adult-looking baby dolls just to make Conrad and fellow producer Tom Glynn laugh. “Then one day he got it so right, I thought, ‘Well, this person looks more grown up than a grown-up,” Conrad says. “This character with male pattern baldness, mutton chops and a beer belly looked like my Uncle Frankie. So we set out to build a hundred of these that all have a hundred different identities.

“What Tom, Jeff and I would do was secretly walk around Chicago and photograph people and then build the dolls to look like these people we see in our neighbourhoods. Alia Shawkat’s character, Little Grace, is one of my favourite iterations. She looks like she’s 12 years old. Street Hustler Boy, who’s this early-40s red-light denizen who’s really struggling, looks like he’s 42. It takes a lot of work, but when you get it right, the hope is that it really sings and allows us to get a little closer to our goal of creating and sustaining an animated TV show.”

Conrad points to shows like South Park and The Simpsons, which have become cultural icons thanks to their longevity on screen but had their own idiosyncratic styles from the outset.

“Although it is the case that the writing is superior, the aesthetic [of those shows] has its own power and distinction so if you walk by your TV, you’re stopped in your tracks by the specificity of what they’re saying and doing,” Conrad notes. “When I saw these dolls coming together, I thought, ‘Well, we have a chance with this.’ It doesn’t look like every other animated TV show.”

Despite its setting, to paint Ultra City Smiths as overly bleak or dark would be misleading. The show is a riot of visual and spoken comedy, while the story is broken up by musical dance sequences that have a dual purpose to unload exposition about a particular character – a technique Conrad previously used in Patriot. In particular, the showrunner highlights the singing talents of cast members including Randolph, Neuwirth and Kristen Bell (The Good Place), who plays Donella Pecker, the slighted wife of a politician caught with his trousers down. Actor and musician Tom Waits voices The Narrator.

The series spent eight years in development as Conrad and his partners – the show is coproduced by AMC Studios and Stoopid Buddy Stoodios (Robot Chicken) – figured out what it would look like and how they would make it, owing to the sheer number of hours of work needed to produce stop-motion animation. It took a total of 10 months to make all six half-hour episodes.

“You have to build shoelaces, you have to build spoons, you have to create trains,” he says. “You can’t take anything for granted. Nothing exists already. We have a character who wears Kleenex box shoes because it’s poor, so we design that, get it to the art department and they start to build it. The dolls are all made to very specific sets of notes we provide them with. Then we build our city.”

A group of more than 60 animators would record eight seconds of footage a day on 32 built sets — a demand that meant Conrad quickly realised reshoots or additional takes would be out of the question if they hadn’t already been planned for.

“We have to shoot the plan, but that’s a really beautiful stage for me because I get to take my hands off it and let these animators really bring their art to this thing,” he continues. The Brooklyn-based Cocoon Central Dance Team choreographed the dance routines, while Conrad himself created the moves for Detective Mills, a lime-addicted cop who forgets his shirt on his first day at work and must often “dance my demons down.”

“There are very specific indications for that,” he jokes of his own dance moves. “But otherwise the animators are just doing their own thing. They will try to figure out when does this character look away? Do they look away when they’re lying? Do they look away when they’re ashamed? Actors usually make those decisions, but in this case, there are 62 people doing it on a daily basis. I didn’t want to stop shooting because we had such a great flow going with this group.”

Writing the show with Glynn, Stephen Hoey and Peter Moxley and co-directing with David H Brooks, Conrad says he now has a better understanding of the show’s capacity for comedy and emotionality, what the dolls can do and what may be too challenging for the animators to achieve.

With writing on season two already underway, “this show is going to get stronger because I know where the beauty is with this thing and where the deep, meaningful laughs can be in the show,” he says. “There are things that if you watched a real person doing them, it probably would not be funny. We have a congressman, Chris Pecker [Bell’s real-life husband Dax Shepard], who has this idea that he can pick up a coin with his penis and then he tries to do it. It’s funny in Ultra City. It would not be funny to watch in real life. Finding those moments that are particular to Ultra City is really my job when writing, and then shooting them is the second job.”

Conrad has also learned not to be afraid to focus too closely on the dolls, after discovering they can create a sense of intimacy to which he says viewers are drawn.

“I didn’t know exactly how people would take to having what is essentially a puppet asking them to feel very deeply. I know that that works now,” he says. “It’s given me an indication that they lapse into that really beautiful place filmmakers are always trying to take them, where they’re there in it and the rest of the world’s gone for a little while. That’s our goal with Ultra City. Now I feel like I have fewer inhibitions and the show has fewer limitations.”