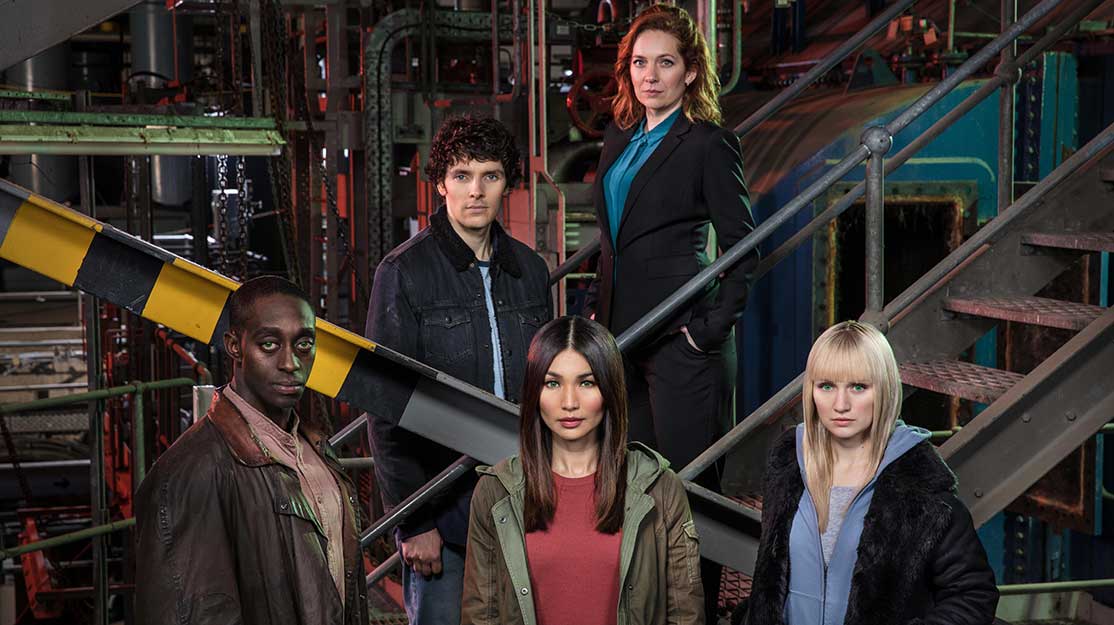 If the cameras are rolling on the set of Channel 4 and AMC’s sci-fi drama Humans, the chances are that Dan O’Neill will be there too. Each season, the movement choreographer is responsible for turning actors into the robotic ‘synths’ central to the show’s premise.

But what started out as a relatively small cast of synths in season one, which debuted back in 2015, has grown dramatically in season three, now airing in the UK and launching in the US on June 4.

To complicate matters further, the synths are no longer all at the same juncture in terms of their emotional or physical capability. Following the mass synth awakening at the end of season two, millions of androids are now able to think and feel, just like the original ‘synth family’ of remaining members Mia (Gemma Chan), Niska (Emily Berrington) and Max (Ivanno Jeremiah).

Meanwhile, season three also introduces a new breed of synths, collectively called ‘orange eyes’ (earlier models have green eyes), which are advanced versions of the original models but without the prospect of them being hacked or gaining consciousness – or so they say.

“In the original season, we had the family of these bespoke synths and then the background synths, who have now become conscious too,” O’Neill explains. “Now there’s been a relaunch of new synths, so that was a real challenge for me this time around because not only did I have to flesh out what a newly sentient AI would be like, but also what would this new product would be like.

“We took a decision to make the new ones simpler, plainer and more clearly robots in their costume and make-up. Everyone’s played into this idea that this new product, being so clearly a synthetic that there’s no way it could pass off as a human, there’s no way it could be corrupted or hacked. So we created something very standard, very identifiable, so it means we’ve got these various layers of AI and consciousness, which has been loads of fun to explore.”

O’Neill compares the ‘green eyes’ synths, those with consciousness at this point in the story, to teenagers, whose personalities are being shaped by their experiences and knowledge of the world they find themselves in.

“But certainly in terms of physicality, all of us creatively have had to work really hard to get these distinct nuances between three types of AI wandering around, if you include Gemma, Emily and Ivanno,” he explains. “So there’s lots of layers. It’s the third season. It’s great to still have so many challenges being set by [the writers] Jon [Brackley] and Sam [Vincent].”

Before each season, O’Neill takes charge of what he calls ‘Synth School’ – casting auditions for groups of 20 people at a time who are put through their paces as he teaches them the basics of becoming synths, covering how they stand, talk, walk, run and interact. For season three, he saw up to 350 people, including many returning actors whose characters had survived the first two seasons.

“It isn’t just about movement, it’s about the look, and the make-up and costume departments have a big say in that, so we agree on this consistent look and feel to it,” he explains. “Then some of those people were selected to be orange eyes, so I had to make up a whole new workshop process to teach them to be different from the standard original green eyes. So that’s all a bit complicated.”

Original cast members Chan, Berrington, Jeremiah and Ruth Bradley (as Karen Voss) also returned to “brush up” on their synth skills. “They’ve been away doing other things, doing plays, waving their arms about, expressing things with their faces and generally acting,” O’Neill jokes, “so I get them back in the room. They say it takes a while but, once they get it back, it’s like an old friend. They’re astonishing, those original synths who helped me create this stuff and have been on board since. They just come to work every day and are just a joy.

“When we started, we didn’t know what we were making. I remember Gemma after day one said two things to me: ‘I can’t do anything else but worry about being a robot. I’m not acting, I don’t feel like I’m doing anything at all,’ and, ‘I’m not going to be a character. I’m just going to be this dead machine.’ I told her she was the most interesting thing I’d seen in such a long time because I don’t know what’s going on behind the eyes. That’s been the real power these actors have found. That’s the thing they have shown me with the movement. It’s not stuck on, it’s inhabited.”

O’Neill says the hardest part about becoming a synth is walking, the challenge of which is to remove any individuality and remain consistent. “It seems so simple but there’s loads of little tells that we do that we don’t want to see a machine do,” he explains. “And finding emotion without being able to express it in ways one would normally use is also tough.”

On set, cast and crew shoot four pages a day on average – four minutes of screen time – and O’Neill notes that the ambition and scale of season three has been ramped up beyond anything seen in the show before.

“There are literally hundreds of synths in the show. But despite that ambition, bigger action and bigger set pieces, we still achieved it on time because the actors are good at what they do,” O’Neill says. “We don’t need to work out how to get in and out of a car anymore, we’ve done that. Over the years we’ve ticked off walking down the stairs without looking and other thing synths can do. Sometimes you get some very complicated takes where there are special effects that may take a while but they’re always ready, always off book. They’re a great team.”

There has been one unlikely new skill for the synth actors to get to grips with,  however. Season three features a scene set in a bar that becomes a popular hangout for both humans and robots, calling for synth dancing. “I did it as one of my improvs in the very early development stage before we started filming season one,” O’Neill says. “I did a whole improv based on going out for a night with synths and what would happen. So we’ve got a flash of that.”

Being on set every day, O’Neill also works closely with the directors to ensure the synths keep to the specific movements that have been established over the first two seasons. This means he can jump in and suggest scenes be reshot if something isn’t quite right. But that’s a judgement call, he admits. “If it’s 18.30 and you’ve got half an hour left and they want to grab another setup, obviously you think, ‘We can live with that, they’ll cut round it or won’t use it.’ So you can’t be precious but, at the same time, you have to be as adaptable as possible within the boundaries of making TV drama. It’s not like working in the theatre or the movies, you don’t get that indulgence.”

But the attention to the detail of the synth’s movements is one of the reasons O’Neill thinks the eight-part drama is credible, which has translated into its popularity in the UK, the US and around the world.

“The quality of the people who come now to casting —–dancers, movement specialists, choreographers – all kinds of people have started coming just to have the experience of it and be on the show,” adds O’Neill, who is also working on Sky1 street-racing drama Curfew. “It means the quality of the standby artists is fantastic. I hope it’s flawless. They’re really committed and they really enjoy being part of a process. For me, that’s a real strength of a show. Without that care and detail they bring, it would lose its credibility. It’s been a gift as a choreographer to work on the show.”