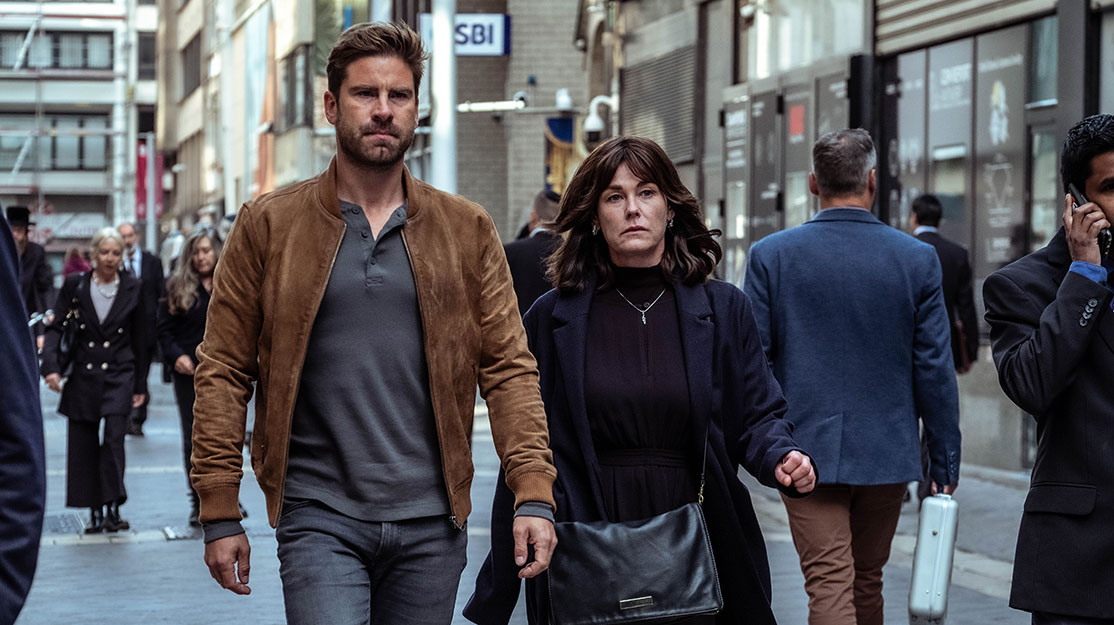 Pieter Van Huyck, head of scripted at Belgian producer De Mensen, outlines how the company developed family crime drama Diamonds, which is set in Antwerp’s diamond district, with support from partners in Israel.

Antwerp’s famed Diamond Square Mile provides the backdrop to the aptly titled Diamonds, an eight-part crime drama that follows the members of an ultra-Orthodox Jewish family in the wake of a devastating tragedy that pushes them deeper into the Belgian city’s criminal underworld.

Kevin Janssens stars as Noah Wolfson, who returns to Antwerp after turning his back on his family and the ultra-Orthodox way of life. When he discovers his brother has brought the once powerful family business to its knees and into disrepute by trading diamonds with dubious characters, Noah attempts to save the firm and restore his family’s honour despite tense relations with his parents, brother and sister. Meanwhile, the previously powerful and strong Wolfsons are completely divided about his return and the future of their diamond company.

Commissioned by Belgium’s Eén and SVoD service Netflix, which will stream the series worldwide, Diamonds emerged from a partnership between Belgian producer De Mensen and Israeli distributor Keshet International. Filming is expected to continue until next month and the series is due to air later this year.

At Content London in December, De Mensen head of scripted Pieter Van Huyck revealed more about the international partnership behind the series and detailed how writer Yuval Yefet (Line in the Sand) and director Rotem Shamir (Fauda) engaged with the local community to ensure the story was as authentic as possible.

Diamonds is described as a thrilling, mafia-like family story that will take viewers into the world of the ultra-Orthodox Jewish community.
Van Huyck: Diamonds is a crime drama with a strong family element, set in Antwerp. It’s about the Wolfson family, an ultra-Orthodox Jewish family with a prominent standing in the Antwerp diamond industry.
The family falls into chaos when the youngest sibling takes his own life. Later in the story, we learn that he owed a lot of money to some shady people. That is the sign for Noah – the long-estranged brother and the oldest sibling, who turned his back on the traditional Orthodox way of life years ago to settle in London – to come back to Antwerp for the funeral of his younger brother and find the family on the brink of collapsing. He decides to stay in Antwerp, take charge and try to fix this. That is, of course, the start of two battles: saving the business and fighting within the family.

The drama is pitched as a local series that has been developed internationally.
Van Huyck: De Mensen is based in Brussels and we always try to develop very authentic, local stories with international appeal. We have these two things in Antwerp that are quite universal but, at the same time, unique. We have the Diamond Square Mile, which is really a square mile where the biggest diamond business centre in the world is located. It’s a very closed community, and it’s also literally closed because you can’t just drive through those streets without a special permit.
Then we have this very important Jewish Orthodox community, where many families run diamond businesses, so these two things together were very strong material to create a series. Because of these ideas, we reached out to our friends at Keshet International in Israel to develop this together. My coproducer Atar Dekel connected us with some very talented guys, Rotem and Yuval. Very soon we asked Yuval to come to Antwerp to meet Jewish families and diamond people and to discover the city. That’s when we started to co-develop the series.

Yefet’s meetings with the community in Antwerp helped to shape every aspect of the series.
Van Huyck: These meetings were very important because if you do this [story], everything has to be right with respect to the Jewish culture. It has to be authentic. It’s not easy to know all the details from the outside. We got a lot of people involved to advise us.
Step by step, Yuval and the team managed to build relationships. This was really important for the authenticity of the show, not only in terms of people, costumes, traditions and behaviour but also, for instance, in terms of locations. Yuval said, ‘Imagine the producers of The Crown with access to Buckingham Palace.’ That’s what we tried to do, and we managed to get access to the real locations, to the real Diamond Square Mile, real houses and real cutting factories. We hope all these things will add to the value of the show.

The main partners behind the series all united behind Yefet’s vision for the series, which is told in numerous languages as part of the effort to maintain authenticity.
Van Huyck: We had big ambitions with this. First, we tried to connect with big international players, but either they were not interested or the show was still too local for them because we did not want to give in on authenticity. For instance, it’s Dutch, Flemish, Yiddish and some English. We would never do this completely in English – that would not be the right way for us to tell this story.
After that, we had to change our game plan. I went to talk to [Eén owner and public broadcaster] VRT and then another problem appeared. First of all, they don’t have big budgets, and maybe for them the show was not local enough. That’s when we went to speak to Netflix and asked them, ‘Would you be prepared to approach this as a local show together with VRT?’ In the end, everyone agreed because they liked the story and how we shoot. We are very happy with this collaboration.

Developing and producing the series was an “adventure,” with one half of the creative partnership in Israel and the other on location in Belgium.
Van Huyck: It wasn’t always easy. We did not agree all the time but there was a lot of respect, based on the fact Belgium and Israel are very much alike for several reasons. We are pretty small territories, with a very demanding audience and a lot of creativity, developing a lot of original formats in scripted and non-scripted. This creative approach and ambition is similar, and that kept us very much together.
In the beginning while writing, it was OK because you can write and communicate over the internet. But when production came closer, we had to fly people to Belgium during Covid and start visiting locations and mixing crews. That was a good time for us to discover that even if we have the same production procedures all over the world, they are not exactly the same. You have different approaches, different job descriptions. But in the end, the love for this story conquered all difficulties.

In the future, Van Huyck believes those involved in international partnerships should aspire to meet up in person earlier in the development process, and more often.
Van Huyck: We should be physically together much earlier in the process because it really helps to have clear communication. You need body language, you need to share these difficult moments and the enthusiasm. Next time, we should be in the same room much sooner and more often.
Very early in the process, we should also check all the positions within a production and their job descriptions because there are a lot of hidden differences, and once on set they appear to be very important. The most important thing I’ve learned is I really like working like this. It’s such a blessing in terms of quality, being each other’s critic and being each other’s support. We will do it again if we can. I hope my friends in Israel would say the same.