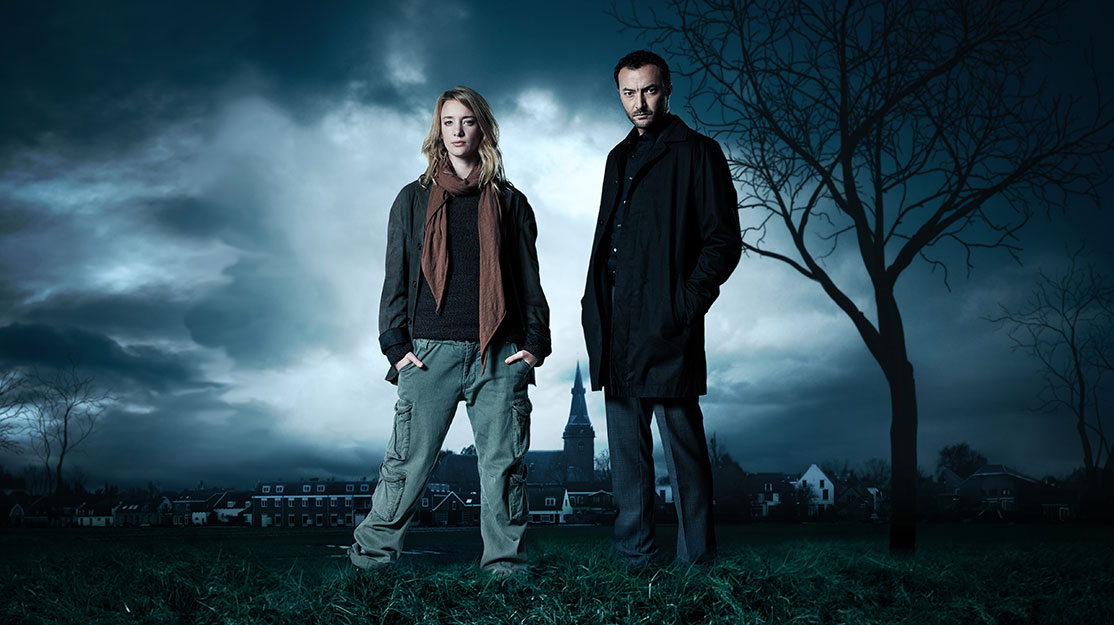 With a second season of mystery drama De 12 van Oldenheim (The Oldenheim Twelve), Dutch network RTL4 is planning to keep its viewers on the edge of their seats all over again.

Season one sees journalist Peggy Jonkers (Noortje Herlaar) return to her home village of Oldenheim, where a 16-year-old girl inexplicably vanishes. When more people start to disappear, detective Sharif Dahmani (Nasrdin Schar) starts to investigate what is going on.

The 12-part series from Endemol Shine Netherlands was RTL4’s most successful series of 2018, and the network subsequently ordered a second run that will take place in a different village with new characters. It will once again be written by Lex Passchier and Martin van Steijn. Anne van der Linden also returns as a director.

What were the origins of the series?
Gerd-Jan van Dalen: In internationally successful series like Les Revenants (The Returned), Broadchurch and Under the Dome, you can see a trend in stories about village societies that come under pressure and where all of the relationships among the inhabitants are put to the test. We wanted to make a Dutch variant that would show the Netherlands in a way that’s different from what you usually see in Dutch drama.

Lex Passchier: When I heard that the mother of a missing mountain climber said she would rather hear that her son had been killed than to keep on living in uncertainty about his fate, I thought, ‘In our village there won’t be any murders, but people will disappear.’ Receiving word of a death is tragic, but uncertainty is horrendous. This immediately enhances the drama.

How was the series developed with RTL4?
Van Dalen: We produced six seasons of the police series Moordvrouw (Fenna’s Law) for Dutch broadcaster RTL4, so we had a lot of good contacts with RTL and its streaming service Videoland. On the basis of a pitch written on just three sheets of paper, they embraced the idea of The Oldenheim Twelve and created a budget to develop it further. When we had an extensive format with storylines and character descriptions, they bought the series and we could start production. Up until the very last minute, RTL didn’t even know how the series would end. They wanted to be surprised, which made them a perfect test audience during the viewings. This is only possible if you trust each other.

We’ve seen lots of dramas about missing children. Why is this proving a popular subject with creators and viewers?
Passchier: Although The Oldenheim Twelve begins with a missing 16-year-old girl, more characters of other ages quickly begin to disappear. So the disappearances can have an enormous impact not only on a parent but also on a partner, brother, sister, friend or neighbor, because it’s so inconceivable. Was a crime involved? Did someone run away? Was there an accident? Everyone can imagine something related to this primary fear of losing someone without knowing what has happened. And a film and television audience is strongly attracted to those fears that most of the viewers are fortunately not confronted with in their own lives.

What are the challenges of blending genres, in this case a mystery with supernatural elements?
Passchier: We are indeed playing with the idea that there’s something supernatural going on in the village, if only because some of the characters begin to believe this when people seem to go up in smoke. But we leave this unclear for a very long time. This makes the mystery more unfathomable, which is the reason we used it. Is the solution supernatural? We’re not going to reveal that here, if only because Dutch viewers are too rational if this sort of thing plays a role in Dutch fiction. The series, including its solution, is especially about believable psychological drama.

How would you describe the writing process?
Van Dalen: Lex wrote the series with Martin van Steijn. Even though they’d worked together before, this was their first coproduction. It worked very well.

Passchier: In the Netherlands, we’re not used to working in a writers’ room. Writing a scenario is often an individual activity. But in a series like The Oldenheim Twelve, with so many characters and a plot that has to be constructed like a house of cards, it works much better to write together. It’s not only faster, but it makes for better stories. What works especially well for Martin and me is that we never say that we think something is a bad idea. We think that a bad idea exists only because of a better idea. Then your level rises.

What is the style or tone of the series and how was this achieved?
Van Dalen: We knew in advance that the series had to have something a bit alienating. At the same time though it had to remain recognisably and Dutch, so we had to find a balance. The directors (Anne van der Linden and Rémy van Heugten) found that balance together with a fantastic cast and crew. It was basically a question of courage and daring.
We experimented and tried out shots that in later editing appeared not to work out because they made things too strange. But this also resulted in some good discoveries that did make it into the episodes. This combined with the camera work of our director of photography (Joost Rietdijk) and with the fact that the story takes place in three seasons, so that you can see the beautiful Dutch landscape change from summer to autumn to winter, gives the whole a special visual allure.

How are the detectives in the series portrayed? What makes them unique against the crowded field of television investigators?
Passchier: In the Netherlands we have a lot of police series with a permanent team of detectives who solve a case each week in a stand-alone episode. In The Oldenheim Twelve, the detective, Sharif Dahmani, is sent to Oldenheim from somewhere else to investigate the missing girl, and then things get completely out of hand. The fact that Sharif has to work in a very closed community that he himself doesn’t belong to and in a story that continues for 12 episodes makes this series different from other Dutch police series. Sharif builds up relations with certain villagers, but at the same time he doesn’t know who he can trust. He isn’t an objective player in a crime plot but instead he too becomes part of the story, also because of how this case affects him as a person.

How does the series keep viewers in a state of suspense or tension across the 12 episodes?
Van Dalen: As a viewer, you look at The Oldenheim Twelve from a number of levels. In the first place, you have the question of who or what is behind all of these disappearances. In addition, it’s also a knock-out race: who’ll be the next to disappear? That could be anyone, including a character that you as a viewer feel closely connected to. We’ve tried to keep the fear of the next disappearance palpable throughout the series.

Passchier: But we didn’t want it to become a predictable pattern. So at a certain point, one of the characters returns and this gives the story a new direction. Where has this person been and what has he or she seen and experienced? And the suggestion of supernatural phenomena gives yet another accent to the tension in the series at the right moment.

What were the biggest challenges, in either development or production, and how did you overcome them?
Van Dalen: The Oldenheim Twelve was an ambitious project. Viewers are increasingly spoiled by all of the series on offer, especially from abroad. You don’t want to lag behind with your story or your look and feel even though we work here with completely different budgets because of our small language area. Foreign colleagues are astounded when they hear the sorts of budgets we work with here and the quality that we deliver. It makes you creative and sharp – how can we achieve the maximum effect with our limited means?

Passchier: The biggest challenge for the story was how we could have an unexpected solution to the mystery, but not so unexpected that it would be impossible to believe. That was a puzzle up through the final day of editing. Everything was in the framework of don’t cheat, give viewers all of the information they need to solve the puzzle but, at the same time, try to stay one step ahead of the viewers and overwhelm them without the answer seemingly coming out of the blue.

Where does this series stand in terms of the progression of Dutch drama? Does it push boundaries in terms of character or story?
Van Dalen: This series is a true thriller. Not many Dutch dramas are set in a small quiet town, but this was the perfect setting to really get viewers on the edge of their seats and it gave the story an enigmatic feeling. Viewers increasingly want to binge watch. The Oldenheim Twelve was on Videoland for a few months before being broadcast on RTL4. During the regular broadcasting, the number of subscribers to Videoland rose considerably because viewers didn’t want to wait for a week for the next episode, they wanted to see the series all at once.
When people say that they really wanted to go to bed but that they kept watching, this is the best compliment you can get. In that sense, The Oldenheim Twelve is part of a new development in how viewers approach a series. No longer a case a week, but being able to lose yourself in a series and not watching it to the end.

Why might the series appeal to international viewers? What makes this story universal?
Passchier: Village communities like Oldenheim exist everywhere. In that respect, this story can easily be transferred to any village in the world. And in their daily lives the characters struggle with universal themes like a fear of commitment, money problems, marital affairs, depression, infatuation or ghosts from the past. The disappearances cause all of these tensions, some of them repressed, to explode onto the surface.

Van Dalen: You identify not only with certain characters but, to an extent, also with all of Oldenheim, which literally and figuratively changes into a war zone where the army takes charge as long as it’s not clear what’s going on. This is very stifling to see no matter what country the viewer is from. In addition, the mystery appeals to the imagination. The settings are Dutch, but they are ‘only’ the decor for a story about the fears, sorrows and uncertainties that everyone can imagine.
Globally, crime is one of the most in-demand drama genres and this show really is a compelling story of 12 people disappearing. It feels mysterious, and that’s captivating for audiences.

Does the prospect of selling a series abroad now inform the types of stories you produce and the way they are told?
Van Dalen: The fact The Oldenheim Twelve has been sold to the US, Russia and Japan shows that we were successful in doing this. We are now filming the second season, The Schouwendam Twelve, which takes place in a completely different village with new characters and a new mystery. In this way, De 12 is modelled after a trend that you see in international TV drama, the so-called anthology series: every season consists of a completely new story with a new plot and new characters, but the individual seasons together form a whole in atmosphere, tone, theme and visual style.
In The Schouwendam Twelve we hope to raise the bar even higher than in the first season because we feel obliged to ourselves and the viewers to do so. But we still work from the perspective of what interests and affects us because then it will also hopefully interest and affect viewers wherever they’re from.