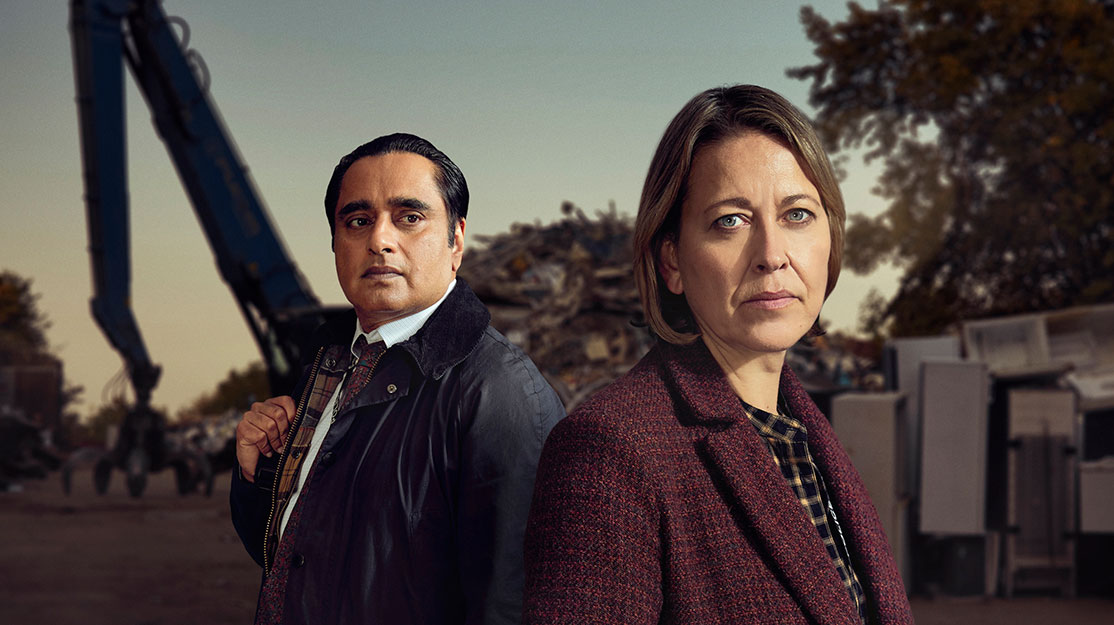 Over four seasons, Andy Wilson has directed every episode of cold-case drama Unforgotten. He tells DQ about the show’s unique filming schedule, its naturalistic style and his relationship with stars Nicola Walker and Sanjeev Bhaskar.

When he signed up for the first season of ITV’s cold-case crime drama Unforgotten, Andy Wilson wasn’t supposed to direct all six episodes. But fast forward six years and Wilson has helmed all 24 episodes of the series, which is now in its fourth season.

Noticeably quieter than some of its more explosive genre contemporaries, Unforgotten has become one of the most accomplished series on television, drawing critical and popular acclaim for the way each season introduces a fresh ensemble of characters and slowly links them to a historical murder. It is then the job of series regulars DCI Cassie Stuart (Nicola Walker) and DI Sunny Khan (Sanjeev Bhaskar) to carefully and methodically pick apart their stories and uncover the truth behind their long-buried secrets.

Written by series creator Chris Lang, season four opens with the discovery of a headless, handless corpse inside a freezer, leading police to the doors of four suspects, two of whom are serving police officers.

“I was only supposed to do the first three episodes, and then we realised when we were budgeting it that it wouldn’t work because Chris had written so many scenes in so many locations,” Wilson tells DQ. “Chris writes small scenes so, in any episode, there are 90 to 97 scenes. If I had chosen all the locations and shot them, then the second block wouldn’t have any money left.”

He then suggested to producer Mainstreet Pictures that he direct all six episodes, producing them like mini-films that shoot out all the scenes featuring one suspect at a time before wrapping with the police and interrogation scenes featuring Cassie and Sunny.

“And that’s how we’ve always done it,” he continues. “That made it unique because we were doing really beautiful, detailed films about these suspects, and then into that came the cops. I knew it was unique. It just seemed like we were on to something.”

Around the same time, Channel 4 launched a documentary series called 24 Hours in Police Custody, in which its fly-on-the-wall camerawork would follow real-life police officers investigating a range of crimes. The series influenced Wilson to film Unforgotten’s fictional stories in a naturalistic way.

“The first season had a female DCI investigating a case where a guy assaulted his girlfriend. She wanted to get him put away for attempted murder and he was trying to get out,” he recalls. “There is a fantastic interview scene where she just calmly took him apart. I showed this to Nicola and Chris and I said, ‘This is what we’re going to do. This is it. We’re going to do this for real.’ That also made it unique.

“We thought it was going to be a good show and then this outpouring of love and praise was a surprise to everybody. We had no idea that it would go to season two and then I had no idea I would direct all 24 episodes. But at the end [of season one], Nicola, Sanjeev and I had a conversation and we all said, ‘So, if it goes again, would you do it again?’ And we all said, ‘Well, I will if you will.’ We just carried on, and it’s turned into a wonderful 24-hour story about Nicola’s character Cassie.”

While the criminal story is front and centre in every season of Unforgotten, Cassie’s personal story has slowly evolved, focusing on the difficulties in her personal life and the affect her work has on her mental health.

“That’s something people don’t consider about the police and generally in cop shows, that these people deal with the stuff in life that we don’t have to,” Wilson explains. “It does damage their mental health. We read a few books about that and Chris is very keen on that. I’ve found that’s been the great thing about it, telling that story as well as the stories of all the suspects. It’s just been pure pleasure and never a dull moment.”

It’s the way Unforgotten slowly and meticulously unfolds that makes the series particularly satisfying, with each season opening with introductions to four seemingly unconnected people as Cassie and Sunny discover a body in varying states of decay. Then, over six hours, these characters’ lives are slowly interrogated and brought together as the police build their case and eventually identify the murderer among them.

Wilson believes viewers can relate to the way being wrongly suspected of murder could blow your whole life apart. “That well of drama is absolutely endless,” he says. “Each new character – we’ve done 16 – reacts in a different way and they’re all hiding something, or not, in some cases. That psychology has been very interesting to talk about with the actors, particularly with Alex Jennings, who played the serial killer in season three. The journey with him was fantastic. In the interview scene at the end where he confesses, it was silent on the set and all the crew were all frozen because it was so chilling.”

The unusual filming structure of the series means many of the guest actors on Unforgotten don’t actually see each other until the plot knits their stories together. Walker and Bhaskar might meet them fleetingly for an early interview scene and then disappear again, only to reemerge when they are doing their final interrogations in the hope of winning a confession.

“With Susan Lynch’s character this year, for example, in effect you’re doing a chronological story with Liz and her mother [played by Sheila Hancock], and shooting all that in their house in Chiswick,” Wilson explains. “Then Nicola will visit on one day. During the first eight weeks of the shoot, Nicola and Sanjeev only come in occasionally, and then we do Nicola’s home as a block. Then we do all the interviews with all the suspects as a two-week block with the police station at the end.

“It’s really interesting because, as much as we can, my first AD and I keep the chronology so that each character has a journey and then, at the end of it, when they come to do their final confessional interviews, they all know what they’ve done, they all know where they’ve been and they’ve all got their stories in their pocket. Those interviews are always fantastic. They’re the most pleasurable thing to shoot, in fact, because the acting in them is off the scale. They know their story because they’ve already shot it.”

The show rests on the relationship between Walker’s Cassie and Bhaskar’s Sunny, whose professional collaboration and their relationships at home weave in and out of the main crime story. Wilson says their partnership has been “amazing,” as has the working relationship across the whole crew, many of whom, like him, have worked on all four seasons.

“We’ve got to the stage where we’re friends and we’re enjoying each other’s company,” says the director, who lives on the outskirts of Danish capital Copenhagen. “All those things that are very difficult between actors and directors who don’t know each other, that’s all gone. I can actually speak to them on a level where I say, ‘Well, what is it you want from a director and I’ll give it.’ It’s been an exchange between actors and directors that I wouldn’t have traded for anything in my life. It’s been fantastic learning experience for me.”

Through the series, which is distributed by BBC Studios, Wilson has honed the realistic visual style, from filming police station scenes with seven cameras in season one to keeping the cameras almost static in season four.

“Within the scenes, I realised it was much better just to sit the camera to look at people,” he says. “I’ve done that more and more. If you look at season three, there’s relatively little camera movement, and in season four the movement is so subtle you don’t even notice it. It’s much more cinematic and we’ve gone widescreen and it has a different impact. That helps with the darker tone and it helps with the naturalistic acting.

“You try to remove yourself as a director from what the actors are doing, so that the audience is simply looking at the actors and reading the story. I’m more pleased with this fourth season, visually, than all the others. The locations are cinematic; the close-ups are not too big and you’re just watching acting.”

The three-year hiatus since season three aired in 2018 can be partly attributed to the coronavirus pandemic, which led to filming on S4 being suspended last March with just four weeks to go. Seven months later, Wilson was back on set with new Covid-19 restrictions to contend with.

“Everyone asked me the question, ‘What was it like?’ And the answer is it was just fucking irritating,” the director says. “It wasn’t difficult, because film crews are used to solving problems and sticking to rules and doing it properly. People had to stay two metres apart. I had staged scenes with actors not standing right next to each other, which nobody has noticed. You can always use a longer lens and squidge them up from a side angle.

“It was just dull because we had masks on and there was no interaction. It made me realise how much work gets done at breakfast and lunchtime, when you’re sitting with the crew. I always use breakfast to talk to my script supervisor, Jane Houston, and we have a little discussion. We couldn’t have that because we weren’t allowed to sit together. The actors didn’t have masks on, obviously, but everybody else did. That was weird because I usually like to get to know everybody.”

While he isn’t moved to discuss a potential fifth season of Unforgotten – “That’s to come. I’m not telling” – Wilson does say his role in television has changed inordinately since he started in the business on series such as Cracker and The Mushroom Picker. The director, who is represented by Casarotto Ramsay, has also worked on The Forsyte Saga, Hotel Babylon, Sinbad, Poirot, Marple and, more recently, Ripper Street, Endeavor and World on Fire.

“Previously, experienced directors would do one or two episodes of a show and hope for the holy grail of an American feature to come along, which I did,” he says, having directed David Duchovny and Angelina Jolie in 1997 film Playing God. “I did my Hollywood feature and I hated it; I didn’t enjoy the experience. I came back and carried on ploughing the field of British drama in television, which is the best in the world. More and more, big directors and big actors want to work in television and single directors are doing the whole series, like Marc Munden [National Treasure] and Tom Shankland [Les Misérables].

“Television directing is now probably better than film directing,” he continues. “If you’re making a studio picture, you’re being sat on like a 10-ton weight by a studio executive, so it’s less authorial than doing television like this where the ITV and Mainstreet executives support and don’t control. If it’s a success, then why not continue doing it, because your pleasure will be there. I like getting onto a set with great actors from a great tradition of British acting and doing something special. If I can carry on doing that, I’ll be very happy.”