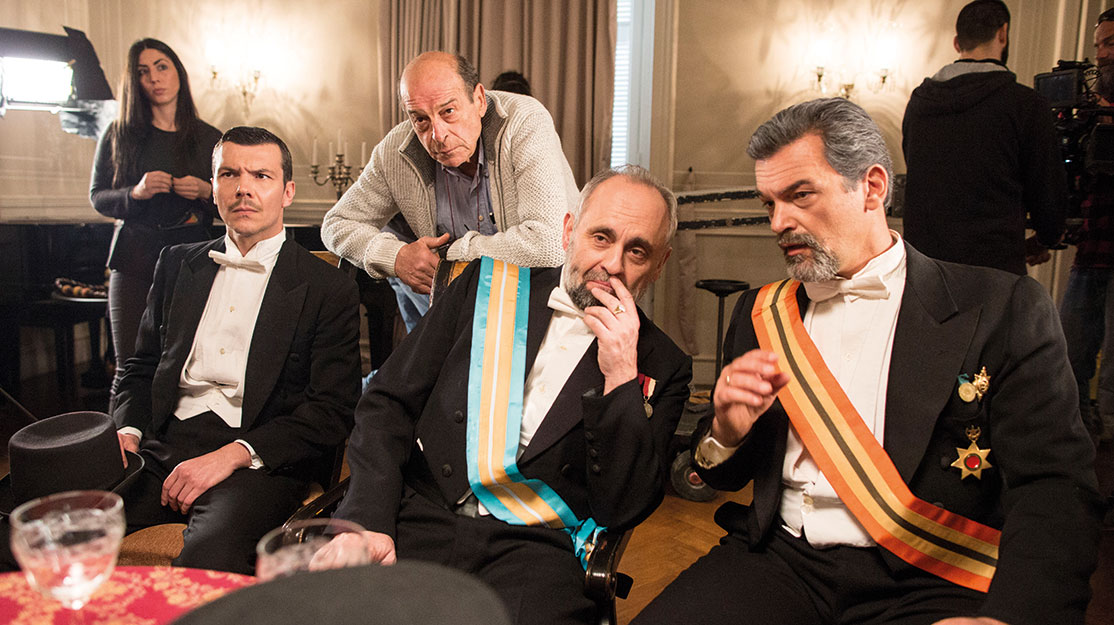 After a decade away from the small screen, veteran Greek director Manousos Manousakis talks to DQ about returning to TV with To Kokkino Potami (Red River) and why historical dramas should talk as much to the present as the past.

A master of hit romance series throughout the 1990s and 2000s, Greek director/scriptwriter Manousos Manousakis has made a triumphant comeback to television with his stirring historical series To Kokkino Potami (Red River), branded by mesmerised viewers as “the love story of the season.”

Based on the eponymous novel by Charis Tsirkinidis, it follows the real-life story of a prominent young couple from Pontus, a then Greek-populated region on the southern coast of the Black Sea, at the turn of the 19th century. Years after their arranged engagement as children, Miltos Pavlidis (Ioannis Papazisis) and Ifigeneia Nikolaidi (Anastasia Pantousi), now young adults, meet by chance in Constantinople and fall madly in love before discovering each other’s identity. Their romance flourishes amidst the unrest started by the rebellion of the Young Turks political reform movement against the rule of Sultan Abdul Hamid II and fights to survive through a line-up of events that lead to extreme violence against minorities.

Filmed in 16 locations across Greece, Russia and France with a cast of 170 actors and more than 1,100 extras, mixing languages and idioms, the 30-part series is set during the turbulent era surrounding the events of the Pontic Greek genocide, which remains today unrecognised by international politics.

The hotly anticipated production opened with an astonishing 30% viewing share in dynamic audiences on its Sunday primetime premiere in October and kept climbing the charts in following weeks, thus offering new channel Open Beyond the fiction breakthrough it longed for since its rebrand from Epsilon under new ownership in 2018.

Having dedicated the past decade to movie-making as Greece’s recession haunted its TV industry, Manousakis feels thrilled to be working on the small screen again. “Television is my home. It makes me happy and brings me close to the people. It’s the greatest joy for a creator like me to be stopped by viewers on the street and be told how they like what you do or how much they missed you,” he smiles.

Although he had picked his theme for the series and started detailed historical research about four years ago, making the series a reality was a matter of finding the right host for such an ambitious project. Russian-Greek businessman and former politician Ivan Savvidis, a newcomer to the domestic TV industry and of Pontic Greek origin himself, became that host soon after acquiring Open Beyond. Manousakis recalls that “by good coincidence, Savvidis was already familiar with the novel and personally embraced the project from the first moment.” Open Beyond also produces.

With a sigh, the director said how much he wished that Red River was not as tragically relevant to the present day as it is – a nod to the incessant warfare in Syria. Nonetheless, one of the reasons that made him want to make this series so much was to show the similarities of the period with today, a whole century later. “The politics of the great powers are repeating themselves in a nightmarishly identical way,” he says. “Yesterday’s allies were tomorrow’s enemies, and vice versa, but the people couldn’t see it. Like nowadays, our heroes believed that their daily lives were in the safe zone, that they could never be threatened and that the law and order would always protect them. But the world just disappeared from under their feet, literally within hours.”

The love story of Miltos and Ifigeneia masterfully unfolds, intertwined with real facts, movements and political motivations of the time. The biggest task, says Manousakis, was to acquire the necessary historical knowledge, though not in a logistical way.

“The challenge is to get emotionally involved in the story and make it part of your everyday,” he explains. “To see the people of that era as your relatives and friends, in flesh and bone, nerves and real existence, not as characters on paper. When you have such a subject, that era becomes your everyday and your reality, while you suffer, rejoice and celebrate alongside your heroes, and come back against the same situations as them.”

The actors have had to study the era thoroughly too – not just events but attitudes and morals. “The feelings are the same, then and now, but the way we express them and speak of them is worlds apart,” Manousakis says. “How people interacted; how a young man in love held the hand of his girlfriend then or how he would dare a first kiss, as opposed to now; how the mother spoke to her child; the neighbours to each other; the priest to his church; it’s a different era, with different behavioural and relationship rules.”

Throughout his career, Manousakis has always overviewed his projects’ scripts. His hard copy of To Kokkino Potami, about 200 pages originally, is filled with some 300 inserts of his own notes. The writing process starts with scriptwriters Nikos Apeiranthitis and Dora Masklavanou, who send him the first draft, which he makes remarks on, before forwarding it to his longtime partners Stavros Avdoulos and Irene Ritsoni for changes. He reads through the updated version and completes it up to a certain point, then the script is back to the first two, who finalise it and give it to Manousakis for one last comb-through.

The daily filming schedule is a challenge and an achievement in itself, he adds, due to the numerous talent and locations involved. Each episode requires eight to 10 days of shooting. “We do have good technology and a very good financial environment, but beyond that, we need to be creative, clever and daring Ulysses in order to bring that surplus value to the screen. We need to go around and find the best solutions for the most difficult situations,” he comments.

Regardless of his 10-year break from making series, ratings confirm that Manousakis is as commercial as he ever was. He categorically denies having a “recipe” or “key” to success, though, joking that a producer can’t order the director to make a calculated success comprising five grammes of love, six grammes of violence and eight grammes of sex. “If you start with, ‘let’s do this because it’s catchy,’ you fail,” he says.

On the contrary, he believes a prerequisite for success is the love that anyone involved in the project should feel towards it, from the producers to the extras. Furthermore, for a romance to become an iconic hit, the words between the lovers, for example, should reflect true love, which the viewer can immediately recognise, since “everybody has both faked interest, and truly loved in their lifetime.”

He affirms that, in every series he has done, he was burning with a desire to share each story with audiences: “You can make nothing if you are not in love with what you do. The dominant feeling is the Eros towards your subject; being unable to not concern yourself with it, and nothing but it. Then, it’s paramount joy when the will of the creator matches the will of the viewers. And that means that what the creator wants in that given moment is what the society craves for.”

Even though the habits of viewers have changed in the last 10 years, what remains invariable is their need to become involved in what they watch. “If this is achieved, they drift away” into the story, he notes.

Despite the fact that Manousakis has been successful in different genres, from police procedural Tmima Ithon (1992) to comedy Gia Mia Gynaika Kai Ena Autokinito (2001), he is best known for dramatic and socially influential love stories. The clashing socioeconomic backgrounds of his starring couples and their struggle to live happily ever after against stereotypes and prejudices were always a focal point in his work – a wealthy architect with a Roma gypsy (Psithyroi Kardias, 1997), a cleric with a congregant (Aggigma Psychis, 1998), a Muslim with a Christian (Min Mou Les Antio, 2004), to name a few. Only now, in Red River, his first historical series, there is “a differentiation in the size of things,” he says, as the contrast escalates on a much broader level and gains ecumenical dimensions, seen in the context of horrendous atrocities.

“In this case, the clash is not between the couple and their entourage, but between them as a couple, and the historical situation,” he exclaims. “In a collapsing society, where laws, moral values and all they had for granted is falling apart, everything vanished except from their love.”

Here too, however, like in many of his previous dramas, Manousakis is concerned with bigotry, racism and fanaticism, all of which he condemns by showing the extent they can wreck a healthy society. He explores “the processes that the man next door, the friend and neighbour who smiled to me yesterday go through until the moment they become my persecutor, my killer or my rapist.”

Acknowledging the attraction of period dramas worldwide, the director explains that people everywhere are, and will always be, interested in history as long as it’s not handled as a museum exhibit. “History is a flowing reality in which we should participate. It should be relevant to today, and its past-time heroes should be recognisable by present-day viewers. A 20-year-old girl should be able to identify with that 1908 girl of the same age,” he says.

While his most iconic, socially sensitive romances have always triggered popular debate, this time Manousakis aspires to motivate his audience not only to become more aware of timeless international political games, but also to disconnect the notion of patriotism from fascism in the collective mind of modern-day Greeks.

“We have wrongly matched up patriotism with political ideologies and are intimidated to express love to our country out of fear of being negatively labelled,” he surmises. “Both the right wing, the left wing, the communist and the anarchist, can each love their country, and all have the right to do so without being characterised for their beliefs.”