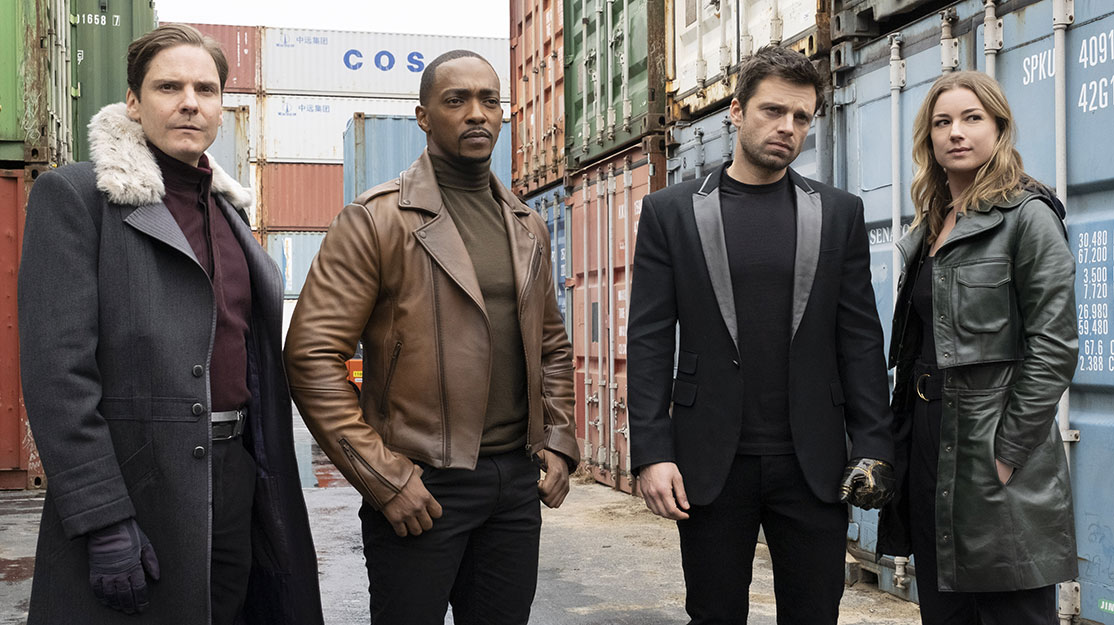 Kari Skogland, the director of The Falcon & the Winter Soldier, tells DQ about joining the Marvel Cinematic Universe and reveals how extreme sports inspired her approach to filming the six-part event series.

With sitcom stylings that were inspired by an assortment of classic television series, the opening episodes of WandaVision upended any preconceived notions of what the first Disney+ series from the Marvel Cinematic Universe (MCU) might look like.

The nine-part series did eventually break free from its ‘television show within a television show’ format, with title characters Wanda Maximoff (Elizabeth Olson) and Vision (Paul Bettany)’s suburban bliss being well and truly shattered to reveal a compelling story of grief and loss at its heart. And the climactic instalments certainly didn’t disappoint in terms of how this cinematic spin-off replicated the action set pieces and special effects typically associated with the MCU.

Behind the camera, director Kari Skogland is no stranger to steering high-end drama, having recently filmed episodes of The Loudest Voice, The Handmaid’s Tale, The Walking Dead, The Americans, House of Cards and Netflix Marvel series The Punisher.

Stepping into the MCU for the first time, her brief was to go further into the world of Falcon – Sam Wilson (Anthony Mackie) – and the Winter Soldier, otherwise known as Bucky Barnes (Sebastian Stan), introducing new characters and reuniting them with familiar faces, all while retaining the movies’ signature action, comedy and high-octane pace in a six-part series.

“I’ve worked in premium entertainment for quite a while and I come out of features, originally independent features, so it wasn’t really a big disconnect,” she tells DQ after the show’s finale dropped on Disney+ on April 23. “I am a bit screen-agnostic. I always try to bring the cinema to everything I do, in performance and camerawork and everything.

“I also think the audience of today doesn’t really differentiate [between film and television] anymore. They have high expectations of the smaller screen or their home screen. One might be more event-oriented, granted, but the quality of the filmmaking now has to measure up. The bar is high, so I always aim for that high bar and I didn’t feel a disconnect.

“What I did love about the movie process of it was that nowhere in our process did the word ‘television’ come up. It was always, ‘We’re making a six-hour movie.’ It’s a very outdated idea that television and movies are now different because, at the end of the day, we just get entertained on whatever screen we’ve chosen to see it on, so we always made a movie.”

The show begins in the wake of events that took place in Avengers: Endgame, which climaxed with Steve Rogers (Chris Evans) handing over his Captain America shield to Sam, and it’s clear Sam is reluctant to step into his friend’s shoes. His conflict over replacing Steve is one of the main drivers of the series, as both he and Bucky stand in the shadow of their departed friend and look to find their place in the world after returning from The Blip – an event that saw half the world’s population revived after they had previously been wiped out.

Sam is now at home in Louisiana, trying to help his sister save the family business, while the future of the shield and Sam’s role as Captain America is not assured. Meanwhile, Bucky is trying to make amends for his previous wrongdoings as brainwashed assassin the Winter Soldier when they are both pulled into a new international crisis that means they must once again fight side by side.

“I had to do a lot of catch-up, a lot of research,” admits Skogland as she prepared to join the 23-movie-deep MCU. “We had an executive on set, [co-executive producer] Zoie Nagelhout, who is particularly gifted at knowing everything about the MCU. She’s like a computer chip and has been working in the world for many years, so she knows far more about it than I could ever absorb in any kind of time, frankly, because it is a very rich world.

“But having said that, I was given the task of taking the characters to new levels. We were experimenting. As much as the characters knew who they were up until now, we were now going into new territory by going home with them. So we were meeting Sam’s sister Sarah [played by Adepero Oduye]. We were going into Sam’s life, what he does during a day and his family. Bucky, we were also going into his home life, but he is trying to find relevance in a world that he’s feeling disconnected from because he’s having to figure out how to live with himself and his heinous past, alongside how to go forward.”

The director also had faith that the cast – which also includes Wyatt Russell (John Walker), Emily VanCamp (Sharon Carter) and Daniel Brühl (Zemo) – would know their characters as much as she does. “That’s their job, so I’m there to help them and support them and to help them find what we don’t know together, but also to bring what they do know to the table. It becomes a really wonderful collaboration. It’s all about trust.”

Filming for the series – which paused mid-shoot last year because of the pandemic – took place in the US at Georgia’s Pinewood Atlanta Studios and the surrounding area, as well as in Czech Republic capital Prague, which doubled for numerous international locations.

“I did a lot of research into all kinds of movies that were relevant to the world I wanted to portray. And when I do my research, I do a very broad spectrum,” Skogland says. “For example, I looked a lot at extreme sports videos because we were going to be doing the flying [sequences with Sam in action as Falcon] and I wanted to get a GoPro style of coverage, which hadn’t really been done before because the cameras didn’t exist. We pushed people out of planes and put GoPros all over them in order to get the experience we were looking for.

“In terms of Bucky’s coverage, when he’s with his psychotherapist, for example, I wanted to really feel the claustrophobia of his brain. I wanted to be inside who he is – and these are very organic decisions. They have an aesthetic override. But you’re working out of sync to some degree [due to the filming schedule], so you’re trying to get inside each scene and each character and give a visual language to that character so that it’s going to have a through line.”

No matter how much preparation she did, however, Skogland always tried to find inspiration in the moment, whether that would be from the set or the actors. “It’s a bit of a dance and always I always like to think that, once I get to the set, it’s going to inspire me,” she says. “For all the planning – I do a lot of planning and I really focus on coming in with my bag of tricks all sorted – I love it when that is blown out of the water because of seeing a certain idea.”

Those ideas range from “ping-pong editing” in scenes featuring villain Zemo to capturing Sam with more fluid camerawork. “With Sam, the camera’s moving and we’re just trading off people and finding his world,” Skogland says. “I wanted each character to have a signature [look] and then the world to have this overriding signature. My buzzword was ‘experiential.’”