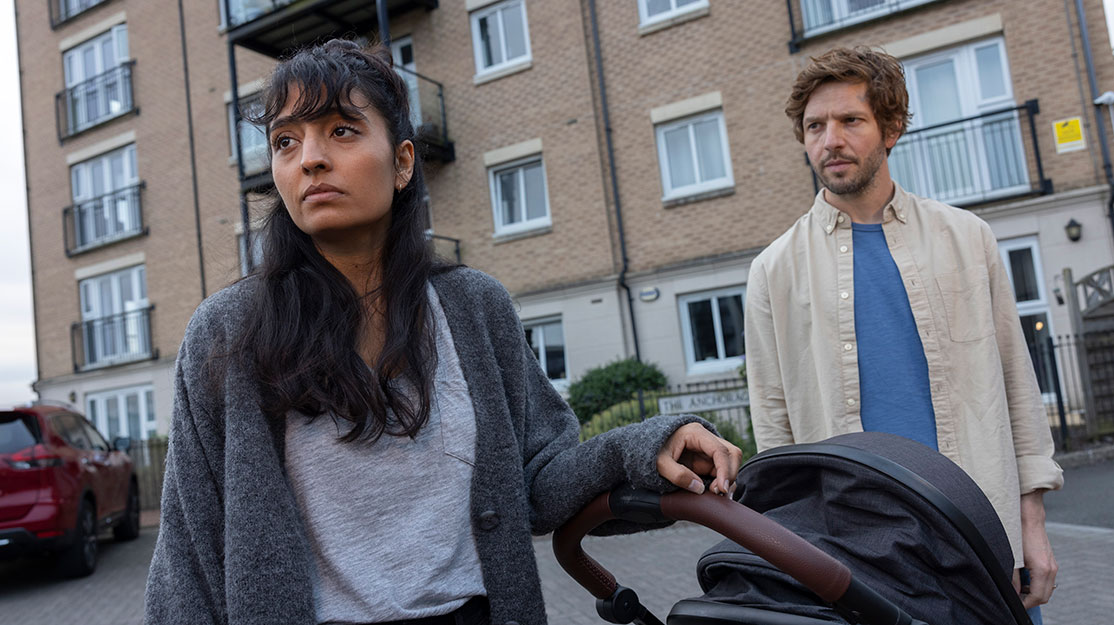 Since it debuted in 2018, each season of Channel 4 anthology series On the Edge has championed three stories from new and emerging writers and directors. In each edition, all three stories also have a thematic link, from criminal justice in season one to unusual love stories in season two.

Now back for a third season, On the Edge shines a spotlight on stories around mental health in families. Mincemeat, written by Samantha O’Rourke and directed by Nadira Amrani, is a comedy about Jane, a young woman trying to cope with her controlling and over-bearing mother who struggles with hoarding.

Superdad, from writer Daniel Rusteau and director Theo Krekis, follows a father and son on a road trip, during which the boy should be at school and the dad is meant to be in a psychiatric hospital.

The third film, horror-tinged Cradled, follows a young mother’s breakdown. It is written by Nessah Muthy and directed by Chloe Wicks.

The series is produced for Channel 4 by BlackLight Television, with executive producers Phil Trethowan and Ben Bickerton sifting through approximately 1,500 writer submissions before selecting the final three for this year’s edition of the series.

“We like the three films to be very original and individual, but also to have some sort of thematic link,” Bickerton tells DQ. “But we don’t impose that upon the show in the early stages. The writers we most respond to, we invite them to come in and pitch an idea to us. That’s when themes start to emerge, and this year what emerged was stories about mental health and the family. We thought we could explore three different family relationships in three different genres, which would give us three unique films that are thematically of the same collection.”

Anyone can apply to the scheme, which is backed by 4Stories, Creative Wales and Directors UK. Writers may only have a few television credits to their name, if any, or have had work produced in the theatre. But the general rule is that they can’t have had anything original produced for the screen before.

“Nessah was a writer we’d been interested in for a while, and she had actually applied for all three series but not got on the scheme,” Bickerton continues. “It was really pleasing to me that she kept trying, and she brought a story that was so personal, so raw and had a take on how to tell it that I thought was really exciting.

“With Sam, we loved her writing. Her writing is really surprising and funny, and she wanted to tell a story about hoarding and about nationalism that just felt really unique to us. Daniel is also a new writer. The first idea he pitched, we didn’t go with in the end, but we really wanted him on the scheme and then he pitched another idea that fitted into our theme, which was the road movie.”

Bickerton and Trethowan’s own partnership began when they worked together on Ellen, a one-off drama for Channel 4 about a tough, neglected 14-year-old girl trying to take control of her chaotic life. Jessica Barden (The End of the F***ing World) and Yasmin Monet Prince (Hanna) starred in the 2016 film, which was directed by Mahalia Belo (The Long Song) and written by Sarah Quintrell (The Power).

“That did really well and it proved to the channel that me and Ben were good with new talent, bringing them through and having this strong product at the end. Out of that, we were talking more to the channel about what we could do next with new talent,” Trethowan says. However, the problem with producing a single film is that only one writer and director are afforded an opportunity.

“The overriding desire to just give more people an opportunity is correct, so we took that idea and took that budget and split into three to make three half-hours instead of one feature. And that’s what became On the Edge.”

Directors are similarly uncovered through a submission process, with around 500 applying for season three. But by the time they are selected, the scripts are already in the early stages of development, so the potential directors are given the chance to pitch for one, two or all three projects.

“Then we’re just looking for people who we feel understand the script, understand the themes and have an exciting vision for it,” Bickerton explains. “It is a big challenge [for them all]. A lot of the writers are used to maybe just writing for themselves, and suddenly they’ve got other people’s opinions to take on. That’s something for them to get used to. For the directors, to suddenly be leading a full TV crew, it’s quite exposing and it’s quite challenging. Part of our job is to try to create this super-supportive environment.”

For Cradled writer Muthy, that open atmosphere was particularly valuable considering her story was “90% autobiographical.” The story follows Maia (Ellora Torchia), who has a wonderful husband, a nice home and a lovely baby but finds her mental health deteriorating with horrifying effects after experiencing a breakdown.

“I was very unwell in June 2019. The thing with me being unwell was I knew I was becoming unwell but, in the same way that happens to Maia, no one in my family would really accept it,” Muthy explains. “Nobody wanted me to be unwell but I was like, ‘You have to accept I’m unwell for me to get better.’ But at the same time, you’re still who you are. I was still a writer and I thought this needed to be talked about, so I was scribbling notes down while also having CBT [cognitive behavioural therapy] sessions.”

Muthy applied to On the Edge with a play she had already written, having recovered quickly thanks to the “fantastic” intervention and support provided by the NHS. When she then met Bickerton and Trethowan, she told them of her ambition to write about women and motherhood, and was commissioned to write a story treatment.

“There is history in terms of intrusive thoughts and OCD [obsessive compulsive disorder] but I didn’t know it was that. I’ve had it all my life but I grew up in the 90s and early noughties and there was no internet to turn to,” she says. “You just think you’re a monster and I was very scared about having children because I didn’t know what this horrible thing was inside my brain. So the very personal element of it [Cradled] has always been there. Actually, being ill was the best thing that happened to me because it released me from that.”

In just 27 minutes, Cradled follows Maia as her anxiety and depression accelerates after hearing voices and seeing haunting reflections in mirrors. Attempts to reach out to her family when she confesses to fearing she might hurt her baby are ignored for fear that social services might separate them. Maia is ultimately pushed to the brink, before she finds the support she needs.

“When you depict mental illness, often the person who is ill is so far into their illness that everyone around them is telling them they’re ill, whereas I wanted to flip that,” Muthy says of her approach to the story. “Maia’s trying to tell people she’s ill and people are scared to accept that. I was also very aware how the unknown is far scarier than the known. When I was ill, it was scarier knowing I was ill than when I was telling everyone, when suddenly the weight wasn’t all on me.

“The greatest taboo is to be a mother who thinks they’re going to harm their child. I wanted to say there is help. You can get better, it’s not always going to be like this, which is the message of the whole piece. If it helps one woman or one family, that’s my mission completed.”

The script was written in January and February last year, and pre-production began in earnest until the Covid-19 pandemic brought a halt to proceedings in March. Muthy used the hiatus to rewrite the script, with filming belatedly starting in on all three films in Cardiff, Wales, exactly a year later. The series debuted on Channel 4 earlier this month and is now available to stream on All4.

“It definitely had practical effects,” Trethowan says of the impact of the pandemic. “Cradled, in normal times, would have been shot on location. These films are generally 100% shot on location. But because we were filming with babies – triplets are playing the part of one baby – and we’re filming in what is meant to be quite a small flat, we weren’t comfortable with being able to maintain the social distancing requirements and that added layer of three really young babies on set. In that instance, we built a set rather than shooting on location so we could make it a lot bigger and people could distance more. That was the interesting knock-on effect of Covid.”

“My dream is to find the writer who lives in a town that isn’t cool, who doesn’t know anyone who works in telly and who wouldn’t have any idea how to get an agent or to make a short film,” says Trethowan. “But they’ve got talent and you find them and you launch them. That’s the aspiration of the scheme, to find those people who have got real talent but don’t feel, for whatever reason, that the industry is something they can access. We can help them.”