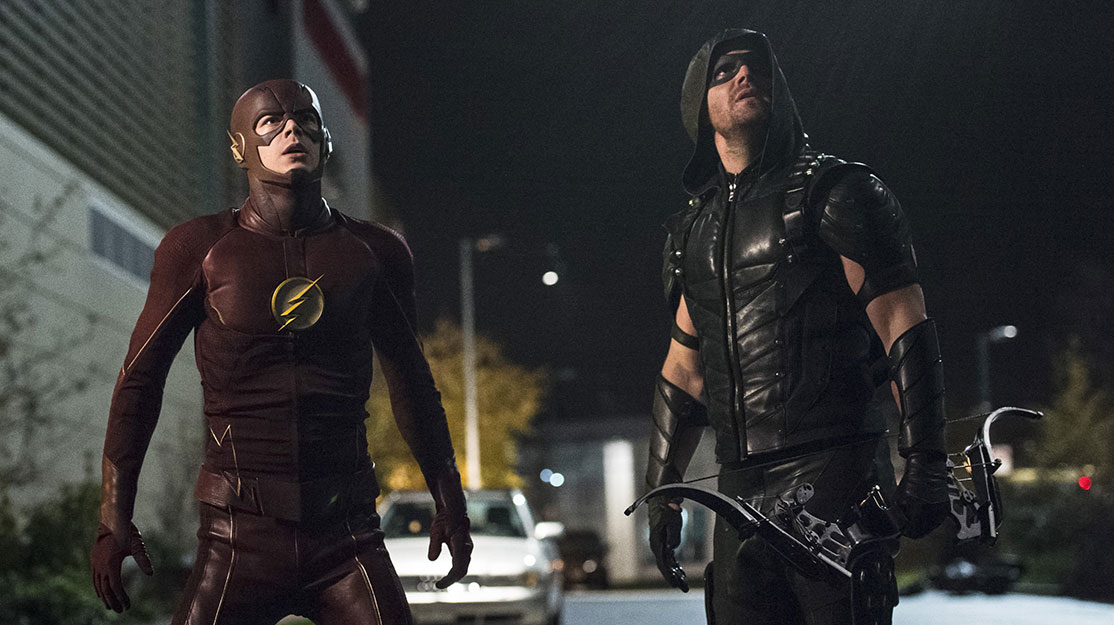 With The Flash and Supergirl set to meet for the first time, Michael Pickard looks at the trend for drama crossovers, with viewers’ favourite characters set to share more screen time in the future.

While the movie world is relishing the prospect of Batman and Superman sharing the big screen for the first time, the realm of TV is preparing for its own superhero event.

The Flash is heading to National City for an appearance in a special episode of Supergirl, which is set to air on US network CBS on March 28.

The crossover, titled Worlds Finest, sees Supergirl (Melissa Benoist) gain a new ally in the form of lightning fast The Flash (Grant Gustin) when he appears from an alternate universe to help her battle Silver Banshee and Livewire, in exchange for helping him find a way to return home.

Details of the special episode were confirmed in February, with all manner of speculation, rumour and sheer excitement building across the internet since.

But what is behind The Flash’s appearance in another series, away from his home on The CW, and why would the producers be interested in an event like this?

Regular viewers of both shows will be aware of their place in the DC Comics-inspired universe that’s building on The CW through series like Arrow, The Flash and DC’s Legends of Tomorrow, coupled with Supergirl, Gotham (Fox) and Constantine, which aired for just one season on NBC in 2014/15.

But the superhero shows on The CW and CBS have more than just their comic book roots in common. They all come from the creative team of Warner Bros Television and Berlanti Productions, and in particular Greg Berlanti and Andrew Kreisberg.

And while The CW series were all conceived to take place in the same fictional universe – much in the same way as the Marvel feature films featuring Iron Man, Captain America et al, and the Netflix/Marvel series including Daredevil and Jessica Jones – this is the first time Supergirl will become part of that world.

“We are so incredibly excited to announce something that we have dreamed of happening since we starting making Supergirl – The Flash and Supergirl are teaming up,” said Berlanti and Kreisberg when the crossover was announced. “We want to thank Grant Gustin for making the time to come visit, on top of his already immense workload, and all of the folks at CBS, The CW, Warner Bros and DC for working this out. And finally, thanks to the fans and journalists who have kept asking for this to happen. It is our pleasure and hope to create an episode worthy of everyone’s enthusiasm and support.”

While The Flash has become one of The CW’s biggest hit shows, renewed this month for a third season in 2015/16, it has only averaged 3.7 million viewers this season, while Supergirl is soaring much higher with 8.1 million. So this begs the question why The Flash is going to spend time with Supergirl on CBS and not vice versa. With so many more people tuning in to Supergirl, CBS can’t expect much of a ratings bump with The Flash’s appearance – so what’s behind it?

In this case, it seems as though this is an entirely creative exercise, bringing together two popular characters. Berlanti and Kreisberg noted as much in their statement when they said this was something fans had been asking for – and their wait will be over soon enough.

Of course, with the worlds of Arrow, The Flash and Legends of Tomorrow already meshed together, it’s no surprise that this is just the latest crossover in the DC universe. Arrow and The Flash have been regular screen buddies (see top image), ever since The Flash was initially introduced in three episodes of Arrow before landing a series of his own. They have since gone on to appear multiple times in each other’s storylines.

Similarly, some of the characters who would later star in Legends of Tomorrow were also first introduced in The Flash – namely Captain Cool (Wentworth Miller), Firestorm (Victor Garber and Franz Drameh) and Heatwave (Dominic Purcell). Arrow was also responsible for establishing Atom (Brandon Routh) and White Canary (Caity Lotz).

Conversely, both Arrow (played by Stephen Amell) and The Flash themselves have also popped up in Legends of Tomorrow, showing the fluidity of their shared storylines and characters.

Crossover episodes are not a new concept in television, of course. Two other CW shows, The Vampire Diaries and its spin-off The Originals, have crossed wires.

In the Marvel television universe, Agent Carter’s title character has popped up in sister ABC series Agents of S.H.I.E.L.D. On Netflix, Daredevil’s Claire Temple appeared in an episode of Jessica Jones, which also introduced viewers to Luke Cage (Mike Colter) ahead of his own series, which launches on the SVoD platform on September 30 this year.

And it is this mechanism of introducing characters ahead of a spin-off series that is one of the most common reasons for a crossover episode – in essence serving as a backdoor pilot.

A 2005 episode of CSI: Miami led to CSI: New York, while original hit CSI opened the door to CSI: Cyber in 2014. CSI, CSI: Miami and CSI: NY came together for the first time in a three-part story that aired in November 2009.

Elsewhere, NCIS was introduced through a backdoor pilot from Naval legal drama Jag, before it in turn gave birth to NCIS: Los Angeles and NCIS: New Orleans through backdoor pilots in 2009 and 2014 respectively. They have all enjoyed further crossovers that largely involve lead characters from the main series joining its younger siblings.

More recently, NBC’s Chicago franchise, overseen by Dick Wolf (Law & Order), has seen characters from Chicago Fire, Chicago PD and Chicago Med cross over – with more in the pipeline should Chicago Justice get a series order for the 2016/17 season.

The increasingly common use of crossover episodes goes to show how just a handful of successful TV shows have been able to build franchises or shared worlds, giving viewers more of the stories and the characters they enjoy and dominating the broadcast networks’ schedules.

But while the idea of a crossover could help boost one series by introducing characters from its more popular sibling, in many cases, as it appears with The Flash and Supergirl, it’s just a fun way to see popular characters from different shows appear alongside each other, even if it’s only for a single episode.

And should this latest example prove to be a success, it will be only a matter of time before fans can look forward to seeing Supergirl make the return journey to The CW.