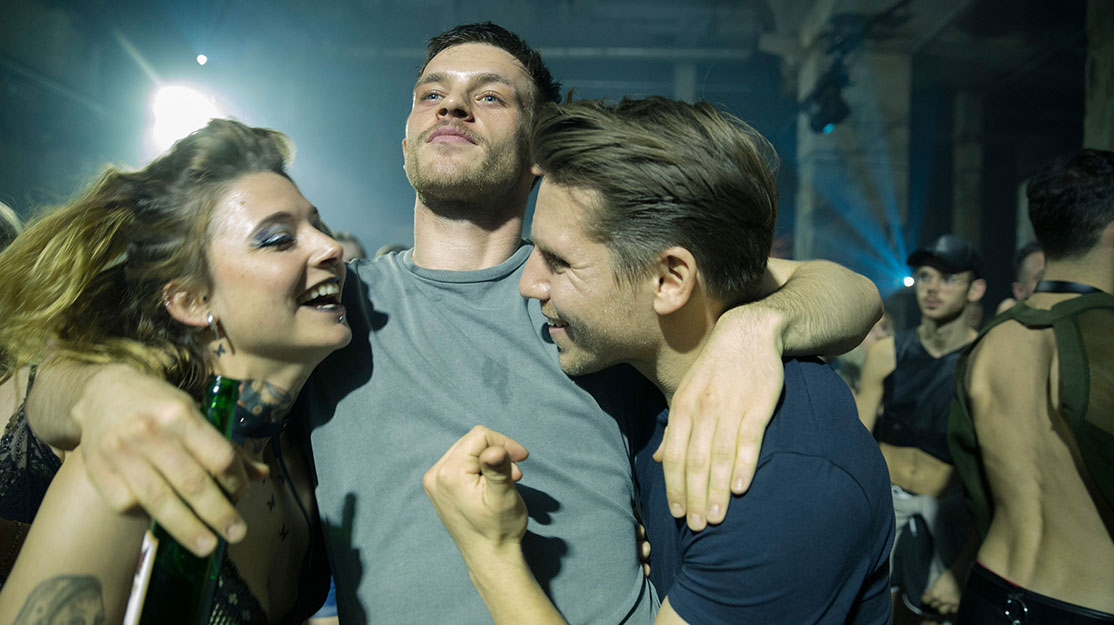 The world of organised crime plays out against the pulsating backdrop of Berlin’s club scene in Beat, the fifth German original series from Amazon Prime Video. Creator and director Marco Kreuzpaintner reveals how he meshed his love of the city with the real-life issue of organ trafficking.

Right from the beginning of its startling, fractured and kaleidoscopic title sequence and its opening scenes, which include a tracking shot that introduces viewers to the characters that populate Club Sonar, German drama Beat draws you into the Berlin party scene with its hypnotic soundtrack and the charisma of its drug-addled title character.

This might be a crime thriller but, from those initial moments, creator and director Marco Kreuzpaintner sets up a world that is rarely seen on television. Then, through the opening episode, he places it squarely at odds with another subject – the underground industry of illegal organ trafficking.

Beat is the story of Robert Schlag (Jannis Niewöhner, Maximilian & Marie de Bourgogne) – otherwise known as Beat. The club promoter pushes life to the limits as he enjoys all the perks and opportunities of being one of the most popular and well-connected people in Berlin. But all around him, organised crime has a hand in everything that makes money: drugs, humans, weapons and organs.

When they have nothing left to lose, state agencies turn to the unconventional methods for which Beat is best known. No matter what you need or whom you’re searching for, Beat knows the right people to ask. But when he’s brought in to find the string-pullers within a corrupt system, Beat finds his past soon catches up with him.

Kreuzpaintner had spent 15 years living in Berlin and knew the city’s vibrant nightlife, but was moving back to the Bavarian countryside when Warner Bros approached him about making a new series. Wanting to do something he felt a personal connection with, he drew on the German capital’s club culture – “the best in the world, actually” – and paired it with a story about organ trafficking.

“I was reading an article about a thing that not many people are aware of, that some refugees on their way from Africa and other countries into Europe are disappearing, not only by the danger of the journey but by a calculated, ongoing mafia that is taking advantage of people who are not missed immediately by trading off their organs,” he explains, speaking at Amazon’s Prime Video Presents event in London in October. “I thought that was quite horrendous. I brought two subject matters that are so far away from each other together and I thought they made a great conflict with each other.”

Kreuzpainter says he was naturally drawn to turning the story into a television series because of the variety of topics you can address in an episodic format. Also, “I’m a little bit bored of the classical three-act structure right now,” he says of the movie industry, “so that’s why I feel like making series. You can take detours and dive into characters’ absurd existences. You don’t have to push plots in a certain direction, so that’s what I really like about it. New platforms and series and the competition they have created have given a really big advantage to filmmakers nowadays.”

Described as a partygoer par excellence, Beat is always awake, always high and simultaneously always broken and traumatised. When he was six, his parents suddenly disappeared and now he can’t remember them and doesn’t even know if they are still alive.

He is recruited by European Secret Service agents Christian Berkel (Richard Diemer) and Emilia (Karoline Herfurth) to help crack Philipp Vossberg (Alexander Fehling)’s organ-trafficking operation, which orchestrates the kidnapping of refugees and sells their organs to the right people with the right bank balances.

Other characters include Jasper (Kostja Ullmann), Beat’s childhood friend, and Paul (Hanno Koffler), the owner of Club Sonar who brings Vossberg in as a new investor. But when Paul’s son needs a new heart, Vossberg has Paul under his control.

Vossberg, a director at a logistics company, is a man who has everything and can do anything he wants but only feels alive when he crosses that last border, destroying existences, owning people and controlling their fate.

“The most interesting thing about this character is that you can’t really grasp him, so it’s very difficult to say who he is,” Fehling says. “I do think he’s some kind of analogy for something that is in us, that has always been in us and always will be. For example, greed and the wish to do anything you want and the urge to expand beyond limits, and his drive for power. But on the other hand, he wants to understand. That’s pretty interesting.”

The actor says Vossberg is only interested in playing a high-stakes game, one in which the players must face losing everything in order to win. “I was particularly interested to explore this part because everything he says has a deeper truth,” Fehling continues. “He’s a very talkative guy, as opposed to Lina. So I was fascinated by the fact that Vossberg, who’s admittedly one of the cruellest figures in this piece, speaks about so many subject matters that actually make a lot of sense. There’s a strange honesty about him. It’s just a question of perspective, like always, so exploring the part was really finding out about Vossberg’s perspective on things.”

Lina, played by Anna Berderke, is Vossberg’s right-hand woman, taking care of the operative side of the business. She follows her orders with a cool and scrupulous nature, and always without conscience.

“Emotions are not really useful for such a job as Lina has,” Berderke says. “She really tries not letting emotions or personal relationships interfere with what has to be done. So she would also not let people get to know her. She’s more of an observer and a listener. She’s super fun to play.

“I would not describe her as a funny person but it was fun in a way. I had not done anything before like that, so it was pretty interesting because she doesn’t really use a lot of words, but that’s a lot of what you do when you act, right? You have certain actions, so that was interesting.”

Fehling previously starred in season five of Homeland, and despite the different production approaches between the US thriller and Beat, he says choosing a role comes down to the people and the material you work with.

“When I signed up for this part, I knew the entire script, all of the seven episodes, which wasn’t the case with Homeland, where we would get the script for the next episode every two or three weeks. Plus there was almost always another director for the next episode, so that was really an exercise of letting go of control, even in regard of your own character,” he explains. “There’s always another approach for everything you do, and you need to see it as an opportunity. So I think you can do things without knowing the arc that you can’t while you know the arc. You’ve got to find the richness in the limitation.”

Beat marks Sommersturm director Kreuzpaintner’s first television series, and he admits he was curious about moving into the medium when the opportunity to make the show first arose. Amazon, he says, has given him lots of control over creative choices, and that’s why Kreuzpaintner believes the quality of scripted series is better on streaming platforms.

“People believe in talent and they should believe in talent,” he says of those working at SVoD giants. “There’s a reason why we do our job. I don’t tell marketing people or producers how to do theirs. Please stay away from me and let me do my job.”

The added bonus is that when Beat drops this Friday, it will be instantly available in Amazon markets around the world. “That’s exciting, especially for a local product shot in the German language. It’s such a beautiful language, but obviously not everybody understands it and that’s why our market possibilities are quite limited normally,” the director notes. “Now, knowing that this is going to be available in more than 230 countries and it’s dubbed in English, French, Spanish, Italian and Chinese, you can reach target audiences all over the world – in the US but also in markets like Australia and Japan. It’s great for filmmakers to show there are great local products.”