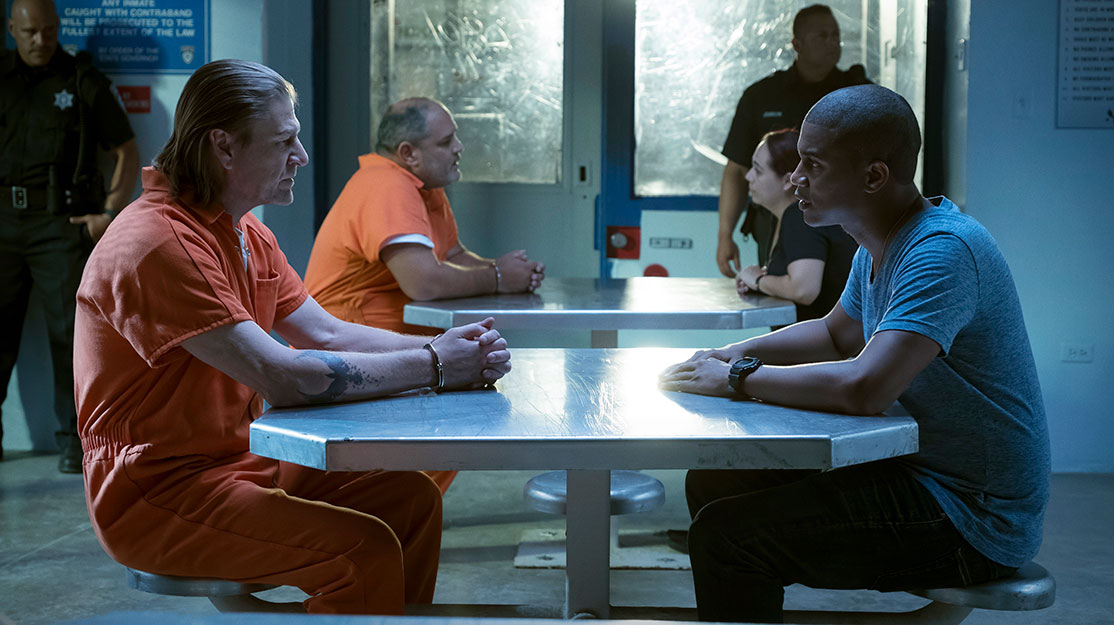 US streaming platform Crackle delves into the world of cop gangs with 10-part drama The Oath. Showrunner Joe Halpin reveals how the show is informed by his own career in the LAPD and how he made the move from police officer to TV writer.

The jump from undercover cop to television writer might seem improbable, but that’s the one made by Joe Halpin. After 17 years in law enforcement, he worked his way from low-budget features to television and is now showrunner of the latest original series to land on US streamer Crackle.

The Oath centres on police gangs and sheds light on the corrupt and secretive societies that do whatever they must to protect each other from enemies on the outside and within their own ranks.

The 10-part series opens as a group of corrupt cops known as The Ravens are arrested by the FBI, which is targeting the multiple cop gangs in the police department. Led by Steve Hammond (Ryan Kwanten), the Ravens are pressured to inform on the other gangs and forced by Agent Aria Price (Elisabeth Röhm) to take on undercover agent Damon Byrd (Arlen Escarpeta) and sell him as one of their own.

With the threat of prison hanging over their heads, Steve must ensure his fellow Ravens – his adopted brother Cole (Cory Hardrict), his partner Pete Ramos (JJ Soria) and Karen Beach (Katrina Law) – stay in line as they operate under the shadow of the Feds while keeping the deal a secret from the other Ravens, including their imprisoned former leader, Tom Hammond (Sean Bean), father of Steve and Cole.

Halpin, who is the creator, writer and showrunner of the Oath, is emphatic when he explains how the plotlines are informed by something he experienced, witnessed or was privy to during his career as a cop. “I just thought it would be a great area for storytelling, and what better way to have a conversation about a problem within the department than create a show that reveals something most people don’t know about?” he says.

British-born Halpin moved to the US with his family when he was 12. He spent 17 years in law enforcement, starting in the LA County Sheriff’s department where he worked in jails holding members of notorious LA gangs including the Bloods and the Crips. After spending time as a training officer and field officer, he moved into narcotics, working on undercover operations. He later carried out undercover and surveillance work for the FBI and the DEA.

Halpin later became in demand for celebrity bodyguard work and was shadowing Steven Seagal during a trip to Poland when he first began to consider the possibility of using his experiences as a cop to become a writer. A year later, he sold a script that was turned into a feature.

“It wasn’t anything I was looking to do but once I sat down and started doing it, I became obsessed with it and doing it well,” Halpin recalls. “There are a lot of people in this business who are glorified tech advisors, who never quite learn to write but they’re kept around because they’re great in the [writers] room and great at story. But I wanted to make sure I wasn’t one of those people. I eventually got out of low-end features and got into television because I realised that’s where the real writers and real experienced storytellers were nowadays.”

He has since earned credits on shows such as True Justice, Hawaii Five-0, Secrets & Lies and Ice. And now his experience working for the LAPD has directly influenced The Oath, with The Ravens based on a police gang he was a member of, The Reapers. “I eventually went on to lead that gang and during that time I was being investigated and followed by both LAPD and the DA [district attorney]’s office,” he reveals. “So when I eventually got out and got into writing, I thought that world was a great place and a rich world for storytelling.”

The story behind The Oath is something Halpin says he has been pitching since he found his way into the television business, though he admits he wasn’t ready to make the show until now. “I wasn’t prepared, I wasn’t really good enough or experienced enough up until this point,” he says. But after Halpin forged a relationship with Crackle, the project moved very quickly. The writers room only opened in January last year but the full series will roll out on March 8.

In the room, Halpin and his team of writers laid the track for each character – their physical and emotional story arcs – before breaking down each episode to ensure it was well paced throughout the season. The biggest challenge, however, was to maintain the tension across 10 episodes. “It’s like holding a piece of string tightly,” Halpin explains. “If you make a mistake in the structure of not maintaining that tension then you can lose the audience and it becomes ineffectual storytelling. So I really focus on making sure the pacing and the structure is very strong in each episode.”

Under the stewardship of directors Jeff T Thomas and Luis Prieto, much of the series was shot with handheld cameras, granting Halpin’s wish that The Oath feel extremely voyeuristic, inviting the audience into the story.

Filming took place in San Juan, Puerto Rico, which provided a vivid backdrop for the series, ostensibly set in an unspecified southern US city. Production was far from straightforward, however, as the cast and creative team were twice flown off the island to avoid two incoming category five hurricanes.

“That was obviously difficult, not because of the difficulty or the interruption but because the crew became like family so there was a lot of survivor’s guilt for myself and the actors to get on a plane and leave,” the showrunner says. “But we stayed in touch on WhatsApp and we were talking to them as the hurricane was hitting, making sure everyone was OK.”

He admits he was a little wary about the location when Crackle first suggested San Juan, having imagined The Oath being filmed in the South Central district of LA where he himself walked the streets. “But then when I visited and I saw the areas and the professionalism of the crew they were using out there, I realised it would enhance the show, it would make storytelling that much better and more vivid,” he says. “It’s almost like someone took a crayon to South Central – it has that same danger in the air but it’s colourful.

“Where I see familiar things like the streets of LA, New York or Vancouver where you film a lot, I kind of tune out when they’re driving in a car. But when I watch shows like Narcos, where I see different colour schemes and different architecture, it interests me more and I thought it would be great for our show because it looks like its set in the southern United States but you just don’t know where, and we did that on purpose because we didn’t want to paint any single police department with the brush of corruption. It enhanced the storytelling and made it a more dynamic exciting world.”

As a showrunner, Halpin says he “thrives during chaos,” which makes him perfect for a hugely demanding role that constantly demands he stays focused on the job while putting out numerous fires along the way. The secret to success, he suggests, is being able to trust and delegate to those around him, taking his lead from showrunners he admires such as Rick Eid (now overseeing Chicago PD) and Peter Leskov (Hawaii Five-0, MacGyver).

“What I’ve learned is the biggest sin a showrunner can commit is to not make a decision,” Halpin notes. “Whether people like it or don’t like it, you’re expected to make a decision and I equate it to asking someone back in the 1800s to go out to sea with you. You’re out there and there’s no sign of land and the food’s getting short. If you don’t know where you’re going, they’re going to cut your throat, throw you overboard and go back where they came from. If you’re going to lead people, you have to have a very clear vision and know where you’re going. If anything, it reinforced that people around me expect me to be prepared and to know where I’m going and to always be that way whenever I’m running a show.”

He’s now planning multiple season of The Oath, which he says could live on beyond the current cast of characters by sticking to its central theme of cop gang culture.

“It’s definitely set so we go deeper down the rabbit hole in season two, three, four and five,” Halpin adds. “Like any great serialised show, there’s a very good chance we’ll lose a few of the players along the way and we’ll acquire new players, but that world and that core group we’ll probably stay with for at least four or five seasons.”