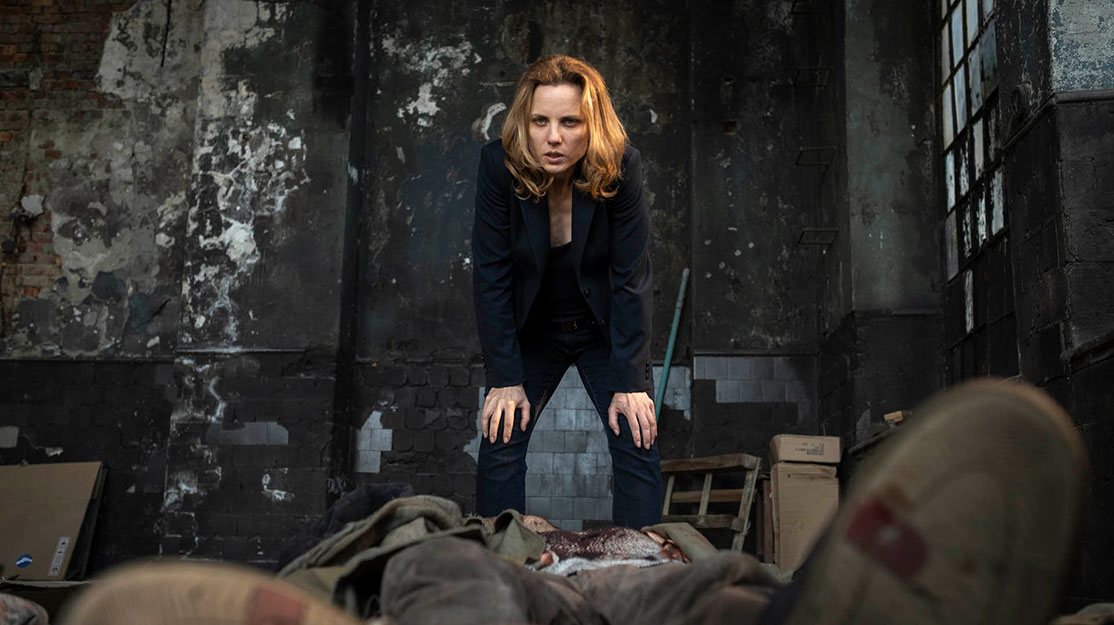 Polish screenwriter and author Igor Brejdygant tells DQ about writing Rysa (The Crack), which is based on his own novel about a top police officer who finds herself linked to the murders she is investigating.

In January this year, Polish streamer IPLA launched Rysa (The Crack), a psychological thriller that follows police officer Monika Brzozowska as she attempts to overcome her fears and save herself.

Working in the Warsaw homicide department, Monika is investigating a series of murders when she uncovers clues that implicate her in the crimes. Suffering from memory lapses, she becomes entangled in a dangerous game that will force her to confront the demons of her past.

However, Rysa, based on the novel by author and screenwriter Igor Brejdygant, is just the first part of Monika’s story. Follow-up Układ is set to continue her journey, only this time in a political setting. Unable to mentally recover after the dramatic events of the previous season, Układ seeks to reveal the truth about what is happening at the top of the government and about people whose influence reaches too high for anyone to dare move them.

Here, Brejdygant speaks to DQ about adapting his novel for television, developing the changing tone between the two series and the race to film both of them in less than a year.

Introduce us to the story of Rysa (The Crack).
The Crack is a story about policewoman who, while running an investigation on a series of murders, runs into herself as a possible suspect in the case. She does not remember a year from a period in her life when she was a heroin addict. Apparently, the key to the present events is hidden somewhere in that year from her past.

How did you come to adapt your novel for television?
First my agent Edyta Płaczkowska managed to get Endemol Shine interested in the novels. Soon after that, Endemol Shine Poland presented the project to Krisztina Gallo from Sony Pictures Television Networks, with whom I had previously worked on a couple of projects [Zbrodnia, based on the Swedish novel The Sandhamn Murders, and Ultraviolet, a project originally created and brought to Poland by Wendy West]. Sony became interested in my novels and that’s how it started.

Did the novel lend itself to adaptation? How did you transfer the story to the screen?
I come from the world of film. Scriptwriting is my first job. I’ve been doing it for 15 years now and I have two feature films [Palimpsest, Simple Story About Murder] and nine TV series in my portfolio.
My imagination works with pictures, and movie-style storytelling is my approach. That’s why the novels I write are probably not that far off from scripts. In other words, one could say that, no matter in what medium I write, I always write a film. That does not mean the novels are script-ready. Film lacks the words a book has. Also, the words in the novel can sometime hide things that are not necessarily very logical – and even if the story has gaps, the reader can fill them with her or his imagination.
Film and TV can’t stand any gaps. It has to be clear and logical to the limit, especially in the genre of crime.

The show is led by Monika Brzozowska. Who is she and how do we follow her though the series?
She is a police officer with long experience in the field but she has not always been the person she is now. She was once a drug addict, and that addiction almost killed her back in 2002.
The experience changed her life. Firstly, she is a bit different from others: she’s a bit harsh, she stands out of frame, one can never tell what to expect of her. On the other hand, the drug experience left a dark gap in her memory. In the story, that gap turns out to be crucial to understanding present events. As the story unfolds, she finds out that there are also black spots in her memory of the current events.
Bearing in mind that her mum suffers from some sort of dementia, Monika is afraid that she might be experiencing the same illness. She does not understand what is happening or what happened years ago, all of which makes her a victim of her own fear and anxiety. She must get her memory back to find out if she is a murderer or a victim.

How does actor Julia Kijowska bring the character to life? Did you work with her at all?
We talked a few times. Julia is simply great in bringing Monika to life. I believe it is important for [an adaptation] not only to be in line with the novel it is based on but also to add value to it. Julia herself is a great value added to that story – she is the best Monika I could have imagined.

How does the series blend crime and psychological thriller?
The two genres are blended within the main character. Monika is solving the multiple murder case on one hand and is going through a psychological drama on the other.

How does follow-up series Układ (The Pact) continue the story of Rysa?
Strictly, Rysa ends with finding the murderer, but it leaves many questions unanswered. We know ‘who’ but we don’t know ‘why,’ and it is a major why. That question is answered in Układ. In Układ, it turns out that it was far more complicated than we could have expected.

Układ is described as a political thriller. How does the story continue and evolve through this series?
It evolves from crime and psychological thriller into a political thriller because the story turns out to be far grander than we expected. The series of murders that at first seemed random were to cover up an operation that I would call a crawling coup d’etat. We have intelligence services of a foreign country involved and it really turns out big.

How would you describe your writing process? Was this different for each part?
It’s very difficult, as scriptwriting always is. A lot of compromises that can be very painful in the process turn out to be for the good of the project.
It was a bit different for each part. Together with my co-writer Bartek Janiszewski, I am still finishing Układ. The process mainly depended on the director we worked with during each of the three stages [Rysa was divided between two directors, Maciej Migas and Łukasz Kośmicki; Układ is shot by one, Leszek Dawid].
We are far more involved in the process during the actual shoot of Układ than we were during Rysa. A lot of things are being consulted with us as they go. That was not the case during Rysa. This could be due to a short production timelime. The whole project, of 16, roughly 43-minute, episodes, is produced in less than a year from the start of writing to the end of post-production or even to the airing.

How was the series developed with Sony Pictures Television Networks, Telewizja Polsat and Endemol Shine Poland?
Quite smoothly, I would say. To manage such a huge project in one year is impressive. I work mainly with the executive producers at Endemol Shine Polska [Magda Cieślak, Małgorzata Retei] and they manage all communication with the main producers from Sony [Krisztina Gallo, Dorota Szcześniak], who also have to run the project with Polsat. There are a lot of pieces in that production puzzle that I’m not even fully aware of. We, the authors, simply write and wait on what happens next.

What challenges did you face while making the series?
We had, and still have, a very tight schedule that, under the pandemic circumstances, becomes even tighter. The Covid restrictions did not make things easier for us production-wise.
There are also quite a lot of steps in the ladder of script approval and for all other production elements as well. It is an international filming event, with foreign financial resources involved, and many people must agree on all the details.
In addition, turning a book into a script is not as easy as it might seem – the way drama and narrative is set up on screen is quite different from storytelling for a novel.

How faithful are the series to your novels? Did you make any major changes and how did these affect the story?
They are rather faithful. My approach to adapting novels is always the same, and I do have experience in that field – I have worked on adaptations of seven novels prior to this. One of them, based on my novel The Rime, aired on Polish network TVN in 2020.
When it comes to a novel, my belief is that if someone decided to buy rights and adapt that particular book, the script should stay in line with the climate of the story as told by the author. On the other hand, book storytelling is different from film, especially when it comes to crime series. There are a lot of schemes and rules that apply to the structure of drama in the language of the film that do not necessarily apply to the language of the book.
There is one major difference from the book. It’s the character of Agata, who replaces the novel character of Adam, the partner of the main heroine. The figure of a younger man assisting an older police woman is now a bit too overused, not only by other authors but even by me. That is why we have a gay woman instead of a heterosexual man.

What can viewers expect from watching the series?
Fear and thought, and also a very realistic insight into the world of addiction and the amnesia and inferiority it causes. Perhaps it is also an interesting psychological portrait, not only of the main character but also of the others. I hope viewers will go along with Monika on her journey into finding out who she really is and who the murderer is.

How do Rysa and Układ stand out from other Polish dramas?
They stand out with their depth of psychology. They are not very typically Polish in terms of the problems they approach, which I believe are quite universal, but they are typical in terms of the surrounding and reality they are placed in. Układ is also a bit more of a political thriller.