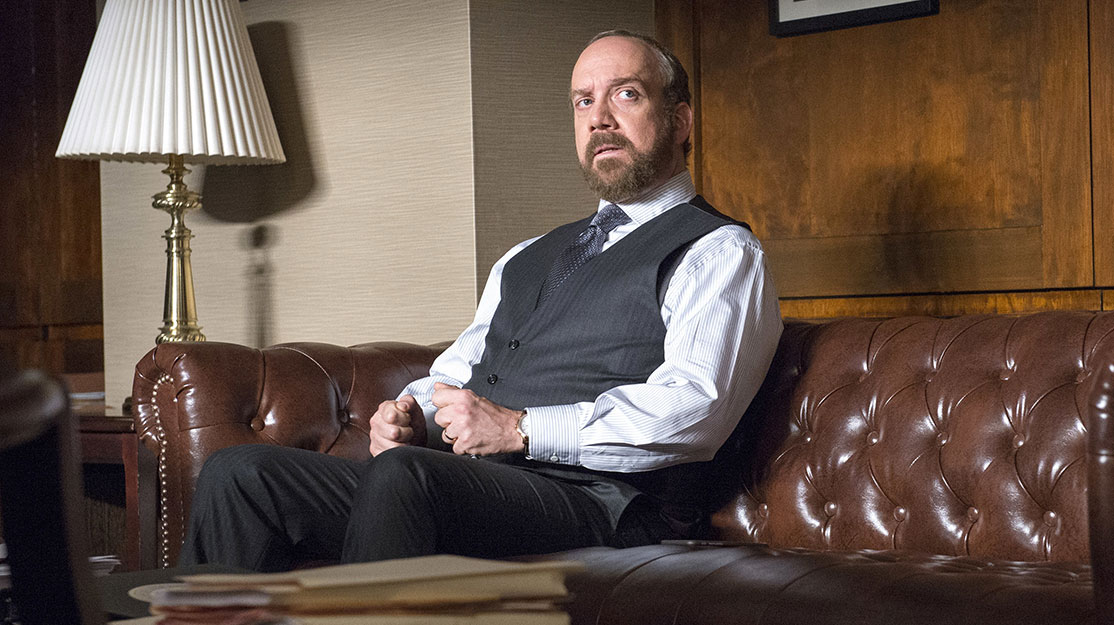 It took something special for movie star Paul Giamatti to sign up for his first leading role in a TV drama. As Billions heads into its fifth season, he tells DQ about making the show and working with the “geniuses” behind it.

As one of America’s most versatile actors, Paul Giamatti has enjoyed a diverse and varied film career. He was nominated for an Oscar for sports biopic Cinderella Man and won Golden Globe for comedy drama Barney’s Version, among a list of credits that include Sideways, American Splendor and 12 Years a Slave.

Giamatti went on to earn awards and plaudits for playing John Adams, the second president of the US, in a 2008 HBO miniseries chronicling his political life and role in founding the United States. He’s also enjoyed bit-part roles in several TV series, such as Downton Abbey, 30 Rock, Homicide: Life on the Streets and NYPD Blue, in which he played a character credited as ‘Man in Sleeping Bag.’

But it’s Billions, the Showtime drama that started in 2016 and plunged viewers into a game of power politics set within the world of New York high finance, that has provided the actor with his most settled and stable period on screen.

For four seasons, he has played Chuck Rhoades, initially the US attorney for the southern district of New York but later the attorney general for the state. Ruthless and with a dislike of wealthy individuals who buy their way out of trouble, he continually clashes with hedge fund boss Bobby ‘Axe’ Axelrod (Damian Lewis) when he is asked to investigate Bobby’s firm Axe Capital – where his psychiatrist wife Wendy (Maggie Siff) also works.

However, season four, which launched in March this year, saw the former enemies join forces in an uneasy alliance designed to take out their rivals, including Grigor Andolov (John Malkovich), Taylor Mason (Asia Kate Dillon), Bryan Connerty (Toby Leonard Moore) and Waylon ‘Jock’ Jeffcoat (Clancy Brown). Created by showrunners Brian Koppelman and David Levien together with Andrew Ross Sorkin, Billions has been renewed for a fifth season to air in 2020.

“I’ve never really done a TV show. It’s curious,” he tells DQ at the Monte Carlo TV Festival. “It’s like, ‘Wow, it just keeps going.’ It’s really interesting. But these guys [Koppelman and Levien] are able to vary the thing in a really interesting way. It keeps changing, so I don’t ever feel stuck in a rut. With a lot of people, you’re really just doing the same thing over and over again.”

Giamatti says that, prior to Billions, he had always been interested in doing a TV show. But the scripts he received – mostly comedies and sitcoms – never quite piqued his interest. Then Billions landed on his desk and, after reading the first few scripts, “I thought it was kind of cool,” he says. “It was a weird, psychological crime show. It was like a chess game crime show. There was no chasing each other with guns; it was all guys in offices on phones and in restaurants making deals. But I thought it was an interesting approach to a crime show and I thought it was interesting dealing with this kind of world.”

Now, after 48 episodes, that initial cat-and-mouse chase between Chuck and Bobby has subsided for an altogether more complex, tangled relationship where characters are neither good nor bad, each residing somewhere in the large grey expanse in between. Giamatti believes this is key to the show’s success, with the writers continually pushing the story forward and not having it fall back to the dynamics laid down in episode one.

“This season was interesting and it’ll be different again next season,” he continues. “It’s a different scenario next season, but you’d have no idea where it’s actually heading. We could end up being buddies again or something. I don’t know. You never know.”

After so many seasons playing Chuck, has Giamatti found elements of himself starting to emerge in the character? “That’s what’s interesting; you do start to worry that there’s something about you in this character,” the actor jokes. He has enjoyed playing out the relationships between Chuck and his powerful, wealthy father, and between Chuck and Wendy, with their adventurous sex life seeing him become her ‘slave.’

“He operates in a lot of different places. The sexual stuff was interesting, actually, and I liked that he is so smart and that he’s generally more effectual than characters I usually get to play. He actually manages to get stuff done. He manages to shape his world in a way that guys I usually get to play don’t. I get to play guys who fail to do that. This guy actually does, and that’s sort of nice. He tells somebody to do something and they do it. That’s really kind of cool. I like power; I like coming in and being able to order people around, it’s sort of fun.”

If Giamatti’s roles are notable for varying in genre, period and style, that’s entirely on purpose. He says he never knows what his next move will be or what he will find appealing, adding that story is always the deciding factor.

“It sounds like a bit of a cliché, but it is true that the story has to interest me more than anything,” the actor explains. “I don’t want to be in a boring story because all that really is going to matter is the movie. And if the movie’s no good, it doesn’t matter what kind of character you played or even how good you were in it. The movie itself has got to be good, so the story has got to be interesting. That’s the main thing.”

Giamatti is more involved in Lodge 49, an AMC series currently in its second season, on which he is an executive producer through his company Touchy Feely Films. The show is set in Long Beach, California, where ex-surfer Sean ‘Dud’ Dudley (Wyatt Russell) joins a fraternal lodge – the Ancient and Benevolent Order of the Lynx – with the promise of beer and camaraderie that may or may not help him rediscover the idyllic life he lost following the death of his father.

It’s clear Giamatti is immensely proud of the series, and he laments the fact it has not been more widely seen despite drawing critical acclaim. “It’s an awesome show. But it’s very different from Billions. It’s not dark – I mean, it gets emotionally dark, but it’s a very optimistic show and it’s terrific. It is odd, but I think it has a really wide appeal. It’s about people in a secret society like a Masonic organisation, who don’t seem like the sort of people who would be in a Masonic organisation, but it’s really fun. It’s a lovely show.

“I do enjoy the producing side of it. My partner Dan [Carey] deals with all the less pleasant parts of it, but I got to deal with looking at the scripts, looking at the dailies, doing the casting and stuff. I got to do the fun stuff. I love to do it. He and I are very interested in genre stuff and the show is a weird genre show. I don’t know what genre it is, but it’s definitely a genre show! I enjoy science-fiction stuff and I enjoy spy stuff, so we try to get stuff like that made. We’ve got some really weird crime things and some weird science-fiction movies, so that’s what we’re interested in.”

Giamatti also executive produced WGN’s Outsiders, alongside numerous film projects, and agrees there isn’t a better time to be in the TV business, with no end of potential broadcasters or platforms eager for new content that will help them stand out from the crowd.

“It’s crazy,” he says. “But I wouldn’t say TV is easier now, or whatever TV is anymore. We used to make independent films and that was nearly impossible. It was very hard to distribute the things. This is easier to do. They’re way more open to stuff.”

Heading back into production on Billions, Giamatti is looking forward to seeing where the writers will take Chuck next. And that, he says, is the show’s greatest strength.

“They are geniuses at plotting,” he adds. “They have kept the plot alive. I don’t watch a whole lot of TV but I hear they have not suffered an off-season. It’s like they haven’t had that, ‘Oh, second season didn’t go well, fourth season didn’t go well.’ I know I feel like the show just keeps getting better, so they’ve been genius for rearranging a plot.”