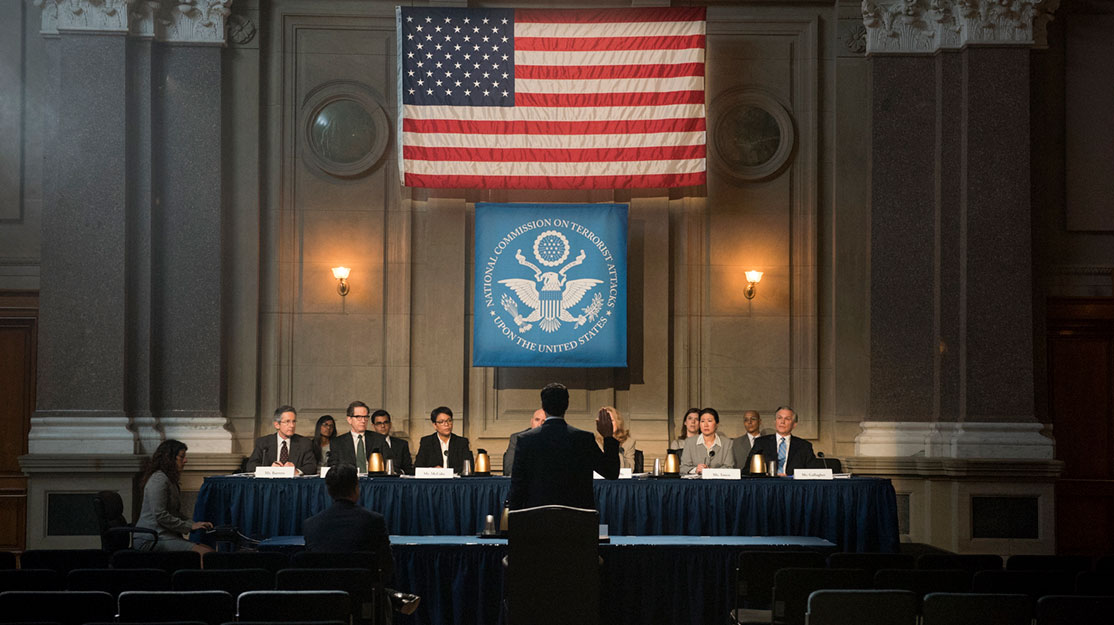 Jeff Daniels, Peter Sarsgaard and Tahar Rahim star in political thriller The Looming Tower, which puts the spotlight on the rivalry between the CIA and FBI and how it may have led to 9/11. The stars and showrunner Dan Futterman tell DQ about making the 10-part series.

When it comes to dramas based on real events, it’s often not the story that holds any surprise but the previously unknown details, which can help bring a show to life. The People v OJ Simpson: American Crime Story retells the story of one of the biggest criminal trials in US history, while Waco focuses on the infamous siege at the titular Texan town in 1993. Similarly, royal dramas such as The Crown and Victoria dramatise the lives of some of Britain’s most famous monarchs.

In the case of US drama The Looming Tower, the 10-part drama tells the story of the terrorist attacks that took place in the US on September 11, 2001. But rather than focusing on that single day, it explores the timeline that led up to the attack and, in particular, the role of US intelligence agencies.

Based on the Pulitzer Prize-winning book by Lawrence Wright, The Looming Tower traces the rising threat of Osama Bin Laden and Al-Qaeda in the late 1990s and how the rivalry between the FBI and CIA during that time may have set a course for tragedy. It is produced and distributed by Legendary Television.

Jeff Daniels plays John O’Neill, the chief of the FBI’s I-48 Squad, who is convinced the US has been targeted by Al-Qaeda. But he and his protégé, Muslim-American FBI agent Ali Soufran (Tahar Rahim), face insufficient cooperation from other government organisations, specifically the CIA, led by Martin Schmidt (Peter Sarsgaard). Schmidt and his CIA colleagues subsequently decide to horde information under the notion the CIA is the only government agency equipped to battle potential terror threats from abroad.

Personal and professional rivalries come to a head when Al-Qaeda operatives in the US, known about by the CIA, begin to put their plan into action.

Like many of the viewers who will tune in to watch the series, the show’s leading actors were largely unaware of the events described in Wright’s book. Wright is an executive producer on the series alongside showrunner Dan Futterman, Alex Gibney, Craig Zisk and Adam Rapp.

“You read the book and hear about John O’Neill and think, ‘Are you kidding me?’ Daniels says. “So I have a feeling, 17 years removed, a lot of America is as unaware of John and the book as I was and I think that’s a great reason why this will be almost new information, especially for all those people who think they know what 9/11 was about.”

Rahim picks up: “I was totally unaware of what happened before and I was really surprised by this true event. So when I talked to Dan and Alex, I wanted to know more about it. I was surprised to see there were Muslim-American heroes, and I wanted to be a part of it.”

By a matter of chance, Skarsgard read The Looming Tower when it was first published. He believes this is a story people should have known about in 2008, rather than 2018.

“The number of people who bought this book was [high] but did everyone really read it? Because I really felt like it should be an important part of the discussion,” says the actor, whose character Schmidt is a composite of real people, unlike the other leading figures. “It took me a while to come around to understanding how to play this guy, understanding how to be in this world. One of the things that really attracted me about this part is I think the fundamental job of being a CIA analyst is being a storyteller – you’re putting together a narrative based on sometimes scant information to try to predict what’s going to happen in the future. And if you look at it that way as an actor, it starts to become appealing.”

Futterman says that while adapting the book, which won the Pulitzer in 2007, it was clear the TV drama – which launches today in the US on Hulu and then worldwide on Amazon on March 1 in English-speaking territories and on March 9 in non-English speaking territories – should be based around O’Neill, who Daniels describes as a complex character.

“That’s one of the great things about Amazon, Hulu, Netflix and all these [types of companies] is that they encourage writers like Dan and Alex to chase complexity, and for actors to get to play that is a great challenge but also a great opportunity,” he says. “I looked at O’Neill and said, ‘I don’t know how to do this but I’d like to figure out how and risk failure.’ That’s what keeps us going, the challenge of it.

“He was a mess personally. Professionally he was brilliant and would go to the mat for the men and women of the FBI, but also for the hunch that Bin Laden was someone we needed to pay more attention to, and he seemed to be screaming into the wind. He started turning over tables and clearing people’s desks and screaming at them. So the way he went about it didn’t work but what he was saying was, in the end, right.”

Sarsgaard notes that his character values an American life more than a foreign one, so he goes all out to protect Americans at any cost. “You can look back and say there should have been more sharing of information but, ultimately, what took their eye off the ball was not the lack of cooperation between FBI and CIA, but that American people were chasing other things – Monica Lewinsky and all of that. When I first moved to New York, it was the year of the first World Trade Center bombing [in 1997] and then the embassy attacks [in Dar es Salaam and Nairobi in 1998]. It never really became something we fixated on until 9/11 and, of course, then with a vengeance. But I think this is something we all participated in. We all, in some way, claim some responsibility as a culture, and we can prevent it from happening again.”

Futterman (Capote, Foxcatcher) says there were two things he wanted the show to accomplish in the scripts. First, through Rahim’s character Ali Soufran, he wanted to show a Muslim-American immigrant from Lebanon as a deeply patriotic American who also understands Islam, as he is in real life.

“When Ali talks about ‘my country did this, my country will do that,’ he’s talking about America, not Lebanon,” the showrunner says. “We wanted to show this guy knows what Islam is about, this guy knows was patriotism is about. The other thing was we wanted to try to provoke was some answers. The 9/11 families and friends of the victims have been asking questions for 17 years now and have got very few answers, so we try to answer some of those questions. And when we didn’t know the answers, we tried to ask those questions again and again and louder than before.”

Like his FBI mentor, Soufran is a hugely complex character, caught between two cultures, though it is the seriousness with how he treats Bin Laden and Al-Qaeda that makes O’Neill sit up and take notice.

“What motivates the character are his values – freedom and respect for life and people,” says Rahim, a French actor who also starred in The Last Panthers. “I don’t think he can bear that these people are hijacking his religion. I got to meet him just to know more about him and it was great to meet an agent like him. There are two ways to portray someone who exists – you can just be like him and imitate him, but people don’t know how he walks and talks so my point was to know him as a soul, a man in his private life and the relationship he had with John O’Neill.”

Will Soufran’s role in the story have any effect beyond the series? “I don’t know what it will be but I hope it’s going to make people understand more about what Islam is and the difference between what is a real Muslim and a terrorist,” the actor adds. “It’s important to tell that piece of history about what happened because it’s not only American history, it’s world history.”

Daniels, last seen on television in Netflix miniseries Godless and before that in HBO’s The Newsroom, says he’s curious to know whether the FBI and CIA are now working together. “You’d like to think with the circus that’s going on inside the White House, the intelligence community is at least sharing intelligence and communicating better,” he says.

Sarsgaard agrees that “daily distractions” mean the country appears to be chasing its tail somewhat. “You see breaking news on television and you know it’s not going to have anything to do with anything that is really about personal threats or about the possibility for bettering the country,” he adds.

Behind the scenes, Futterman says he made the decision to allow each episode to have a different tone of voice – utilising fellow writers Bathsheba Doran, Adam Rapp, Ali Selim and Shannon Houston – rather than rewriting each script “so it sounds like it’s coming out of the same typewriter.” He continues: “People approach the job differently. It also made for less work for me that I didn’t have to rewrite the scripts. The biggest job as a showrunner is are you hiring the right people and these guys I hired, with the DOPs, the directors and the rest of the cast… it becomes an easier job if you get the right people.”

Futterman says television seemed like the right medium rather than condensing this huge story into a two-hour feature film, a point with which Daniels agrees. “We’re shooting a novel. In our head, it’s a 10-hour movie,” Daniels concludes. “There are more details and more colours, it’s really great.”