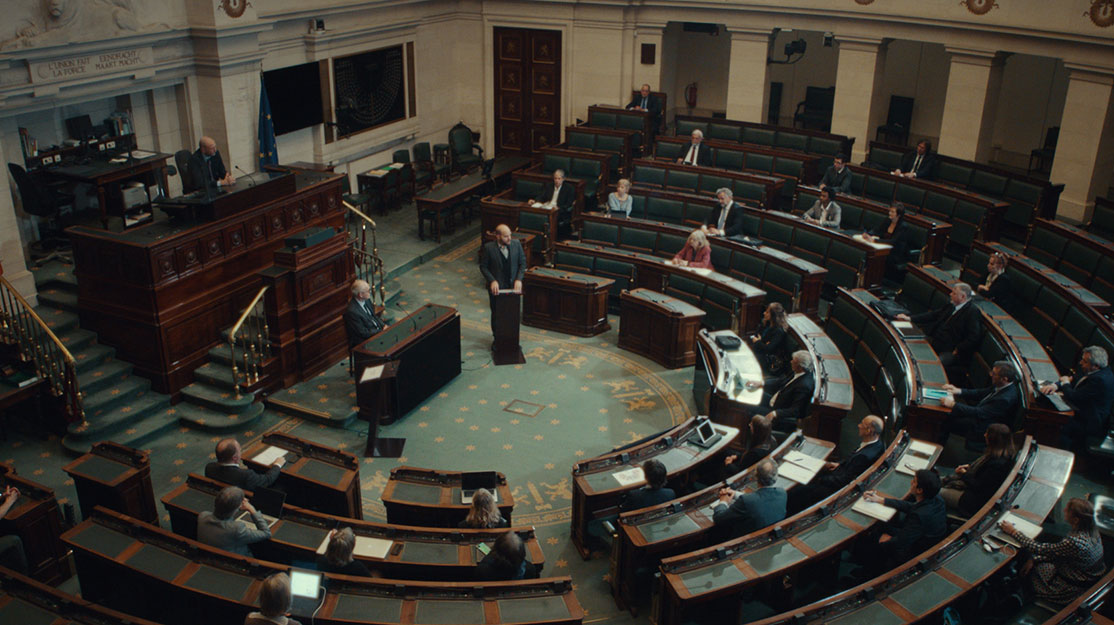 Pandore co-writer and co-director Savina Dellicour and producer Ives Swennen tell DQ about making the Belgian political drama, which centres on a self-serving politician and an investigating judge.

When it came to filming a political drama in the heart of Brussels, the makers of Belgian series Pandore knew they couldn’t fake it. So when the Covid-19 pandemic hit, they decided not to recreate settings such as the city’s parliament building or the Palais de Justice, and instead waited it out in the hope of gaining access.

“Because we wanted to be really real, there were some things we couldn’t fake,” co-writer and co-director Savina Dellicour tells DQ. “We couldn’t cheat. For it to be real, it had to be shot in the real buildings, so basically we had to wait.”

Then when cast and crew were allowed to enter these prestigious locations, “we just couldn’t have a lot of extras. It seems like not a lot of people are working in the Belgian parliament,” she jokes. “But there was something about filming in the right places, in the right streets, in the right buildings. That was very inspiring for us, and I hope that’s something that transfers through the whole series.”

Produced by Artemis Productions for RTBF, the 10-part series centres on the conflict between politician Mark Van Dyck (Yoann Blanc) and investigating judge Claire Delval (Anne Coesens). As the series begins, Claire discovers that her father Simon, who tops the list of French-speaking Liberal Party candidates for the next election, is involved in the tax fraud case she has been working on for years.

When a press conference announcing Simon’s withdrawal is disrupted by activists, fellow party member Marc witnesses the rape of a young women. Unable to react, he alters the truth to serve his own interests as he vies for Simon’s place at the top of the party.

The origins of Pandore date back to 2017, when the idea emerged from a partnership between feature directors Dellicour and Vania Leturcq, who first met while touring the film festival circuit. Artemis producer Ives Swennen then invited them both for a meeting about working on another series that ultimately wouldn’t be made.

When Swennen then asked them if they had another idea in mind, they decided to team up again, this time bringing actor Coesens into the development process. Both Dellicour and Leturcq had previously worked with Coesens on their movies Tout les chats sent gris (All Cats are Grey) and L’année procaine (Next Year), respectively, and wanted her to work with them on a series in which she would play the lead character.

“We thought it would be an interesting experiment to have the main actress on board from the earliest stage,” Dellicour says. “We started meeting and talked for hours to try to find some common ground. That’s the interesting thing about television, the really collaborative part of the development. I don’t think any of us would have made Pandore individually. It was the sum of our creative minds together that came up with this project.”

One of the starting points for the series was their shared desire to portray strong and interesting female characters. “That was one of the things the three of us agreed on,” the director continues. “Also, because actresses over 50 seem to disappear from the screen, we thought it would be interesting to have our main character who is 52. Then there was the moment when Donald Trump got elected, there was the Brexit vote. There were a lot of things that really shook us politically; things we didn’t think would ever happen were starting to happen.”

Coesens came up with the idea of centring the series on a female judge, while the creatives’ discussions about politics led them to create an antagonist in a populist politician who uses unscrupulous means to win election, with the story also highlighting the media and its role in justice and politics.

“We knew from the start that his ambition was a need for recognition, something really personal that would drive him to go up the ladder,” Dellicour says of Marc. “Then when we thought about the character of a judge – we thought it must be interesting to have all that power. What you decide has an impact on people’s lives, so it must be quite difficult to carry with you.

“These people in power all have frustrations and all these human things they are supposed to control, but subconsciously it drives them and then it has an impact not only on their lives but on so many other lives. That was the starting point – to think that whatever they haven’t dealt with personally is going to impact them and the people around them.”

With two characters at the centre of the story, it was a natural decision for the co-directors to choose a visual style that stayed close to the protagonists in an effort to show their personal sides. “Our camera was always on the move. There was a lot of handheld camera,” Dellicour notes of the drama’s documentary-inspired sensibility. “That gives an authenticity, like you’re witnessing something from inside.”

With only eight days to shoot each episode across an 80-day schedule, two cameras were also used on set, often equipped with long lenses to capture scenes from a distance and allow actors the freedom to move around the set. “That meant we were not always right in front of them and they could be free with the blocking and staging,” Dellicour says. “That helped us a lot in the political scenes and scenes with heavy dialogue. We could give it some rhythm and keep it really lively, so we wouldn’t be too burdened by the dialogue.

“Then we had discussions about colours and textures. We used 16mm lenses that gave a softness and also something quite sensual with the image. Then in terms of lighting, we always try to have cold and warmth. For all the characters, even when we see Claire and Marc, we show the bright and darker side. No one is totally good or totally bad. They all have ambiguities and participate in the way things go.”

Producer Swennen is now working with Dellicour and Leturcq to put the finishing touches to a project – coproduced with local streamer Proximus and distributed by About Premium Content – that he describes as a “long journey.”

“The difficulty was putting everything together in eight days per episode and on a budget that was enough but we needed a little bit more really,” he says. “We had €308,000 [US$358,000] per episode, which was a stretch. But the fact that we could put some locations together in the same building made it easier for the production. For me, it was fine. If we had a little bit more money, it could have been better.”

Despite the budget tightrope the team had to walk, creativity proved to be the mother of invention for Dellicour and Leturcq as they crafted a multi-layered series populated with numerous characters and storylines.

“Then they all come together as it gets tenser and tenser,” Dellicour says. “There’s a complexity to our approach to the storylines and characters. That was the fun part about writing a series – we could explore different facets of the characters. I hope there’s a subtlety in terms of the writing that is sustained. It stays tense until the end. We never had to stretch things.”

After an enjoyable first experience in television, the directing partners are now planning their next project. “We want to be better financed next time,” Dellicour adds. “It’s nice to creatively get over problems, but a little more money would be nice.”