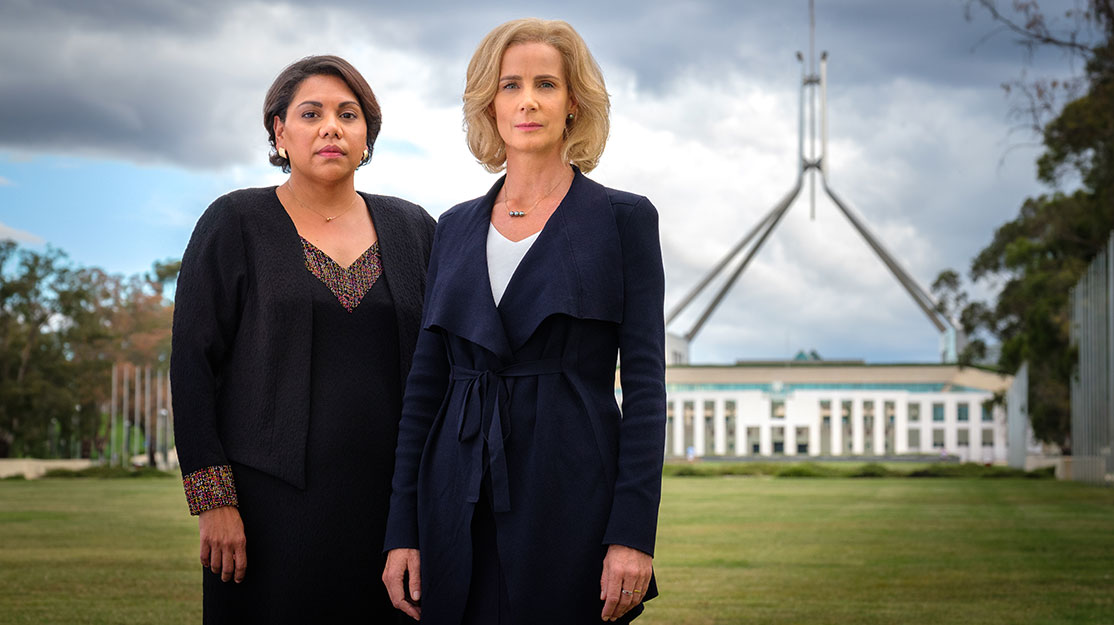 Ahead of the world premiere of Total Control, star and executive producer Rachel Griffiths takes DQ inside the themes and issues behind the Australian political drama.

It might be considered pure folly to contemplate writing a political drama in today’s unpredictable and tempestuous climate. But in Australian series Total Control (formerly known as Black Bitch), issues of race and gender are placed front and centre in a show that has been more than 20 years in the making.

The story introduces Indigenous woman Alex Irving (played by Deborah Mailman), who becomes a national hero when she drags a woman to safety from a gunman. She quickly comes to the attention of embattled prime minister Rachel Anderson who, besieged by infighting, opposition attacks and bad press, overrides her party to draft Alex into the Senate.

However, the political novice soon finds herself at odds with the PM, who might have a hidden motive, the party and the entire government machine. Determined to be more than a political stunt and intent on making a difference, Alex realises she will have to bring down the system from the inside.

The ABC series was co-created by actor Rachel Griffiths (Muriel’s Wedding, Six Feet Under), who plays the prime minister. She says the idea – and the provocative initial title – first came to her when she was 27 and has been evolving ever since, inspired by two real-life events.

The first concerned an Aboriginal woman she met while working on a documentary, who was involved in a native land title claim but received abuse for her cause and had ‘black bitch’ graffitied on her house. The second involved another Indigenous woman, an elite athlete called Nova Peris, who was encouraged to stand for election to the senate and similarly received torrents of racial abuse.

Griffiths describes herself as a “kind of big constitutional and parliamentary process wonk,” and she clearly has an extensive knowledge of and interest in politics in Australia and around the world. She has closely followed US politics since living and working there, and more recently she has been keeping an eye on the UK since the 2016 Brexit referendum. The actor also studied gender issues and representation at university and has examined the role of women in government.

“Back in the day when I first had these ideas, this was a parliamentary thriller with intrinsic themes of race and gender,” she says. “I had the title and it was about an Indigenous senator who is helicoptered into the senate and brings down a government. That was my pitch, and it’s only gotten more relative. Our Conservative party here has barely increased its female reach, particularly in pre-selection [of candidates], and when women have been helicoptered in – able women with life experience over the apparatchik machines – they’re not always welcome at the table. So that’s all where it came from.”

Griffiths initially thought Total Control might be a feature film and pitched it to various people with that in mind. Eventually it landed with Blackfella Films, Australia’s “key Indigenous content creators,” responsible for films and series including Redfern Now and Deep Water.

“When I pitched it to [Blackfella co-MD] Darren Dale, they had aspirations to do a show with Indigenous leads set in the political arena,” she recalls. “It’s not something they had done before. Australia generally hasn’t really done political shows that are quite biographical. But when I pitched it, it was very much on fertile ground. It has a female lead and the title gave it a tonal pitch that was very different. Darren just loved it and he pitched it to our national broadcaster and they loved it. And here we are.”

Griffiths says her character is motivated by a genuine desire to see change and bring about a more diverse political party, rather than simply using Alex’s appointment as a cynical ploy to remove some of the heat from her own position.

“But she’s definitely embattled by a rising right flank and is trying to head that off and surround herself by allies she feels she can rely on,” the actor explains, noting that the series also explores some of the double standards women politicians are held to.

“We show that in the constant sense that she is not legitimate, and that entitled men who are intellectually inferior to her feel that she is doing their job,” she continues. “She doesn’t come from a place of self-promotion. Women often get there through the much harder work of building consensus and bringing people along with you.”

In contrast, Alex is fighting against a parliamentary system that she discovers is slow and often painful, with big changes taking a long time. Griffiths highlights this by recalling the Australian parliament’s decision not to legislate for marriage equality but instead hold a plebiscite in the form of a voluntary national postal survey that gave Australians a say on the issue. When 61.6% of respondents supported a change to the law, a cross-party bill was subsequently passed in December 2017.

Examples such as this, as well as the instability of having five prime ministers in less than a decade, are touched on throughout the series. “But underneath that, it’s quite an impassioned plea for democracies to become more reflective of the societies they represent, to be careful with fast change, to be careful of the power of the personality-driven outsider, and it’s a cautionary tale to people spitting out the dummy when they don’t get their way first time around,” says Griffiths, who last year starred in crime drama Dead Lucky.

Viewers will walk in Alex’s shoes through the drama, witnessing the political experience from her perspective as Indigenous issues such as status and land rights are also explored. “I’m definitely the antagonist,” says Griffiths. “We observe the octopuses I’m wrestling with, but it’s [Alex’s] heart, her life, her journey from outsider to insider. That’s what makes it so powerful.

“I just think it’s so exciting and relevant and interesting and goes beyond any political tropes like a [Netflix series] House of Cards. Not that that wasn’t an absolutely wonderful show, but that was done so well – we’re not making our version. This is about the underrepresented, the historically disenfranchised and badly done-by.”

Playing Alex is Mailman, the award-winning actor whose credits include Offspring, The Sapphires, Jack Irish and Mystery Road.

“She has won more actor awards down here than any other actor next to Judy Davis [Husbands and Wives, Mystery Road] and has never had a lead,” says Griffiths. “It’s such a thrill that she finally had a role that illustrates not only her tremendous breadth of talent but also using the fact that she’s one of our most likeable actors. When you have an actor you just love, people are more prepared to emotionally go further and cross into worlds with that particular actor than they thought they would go through.

“She’s got an extraordinary range but also this intimate lovability. You just love her; you feel what she’s feeling and you go with her through all her mistakes and challenges. She’s pretty extraordinary.”

Behind the camera is director Rachel Perkins (Bran Nue Dae, Mystery Road, Redfern Now), co-MD of Blackfella Films, who Griffiths describes as one of Australia’s most important Indigenous storytellers. Her father, Charlie Perkins, is an Indigenous statesman, “a true legend and national treasure,” so she was able to bring her own experience of Australian politics to the six-part series, which is distributed by Keshet International worldwide and in partnership with Endeavor Content in the US.

“It’s a world she knows. I think it’s almost impossible to quantify that,” Griffiths explains. “There’s nobody else who would have understood the bridge between the worlds and the balancing act that you do as an Indigenous woman director in a very male and very white-dominated industry down here. Visually, she understands the landscape and the contrast between coming from the warmth of the country into these cool Canberra, putrid, mechanistic environments.”

Filming took place in Queensland and the capital Canberra, where scenes were shot in public areas around government buildings, while some studio sets were also built in Sydney.

Coming off the back of directing feature film Ride Like a Girl, Griffiths has immersed herself in making the series, both in front of and behind the camera in her dual role as actor and executive producer. “I’ve been very involved in breaking what the show would look like, character arcs and what we’re trying to say,” she says. “I had great access to members of parliament and senators. Many women were quite open about their stories. We had a wonderful early story room with a lot of different people coming in and talking, which was just fabulous. And now we’re just starting to do that again for season two.”

With the series premiering at the Toronto International Film Festival, talk of a second season is premature, but Griffiths imagines a three-season arc to the story. “I’m sure it’ll start a conversation, or a few conversations,” she adds. “It hasn’t been designed to be a social-impact service. It’s just speaking to the zeitgeist as a conversation of the time. Democracy is never something we can take for granted, and people are really awakening to that.”