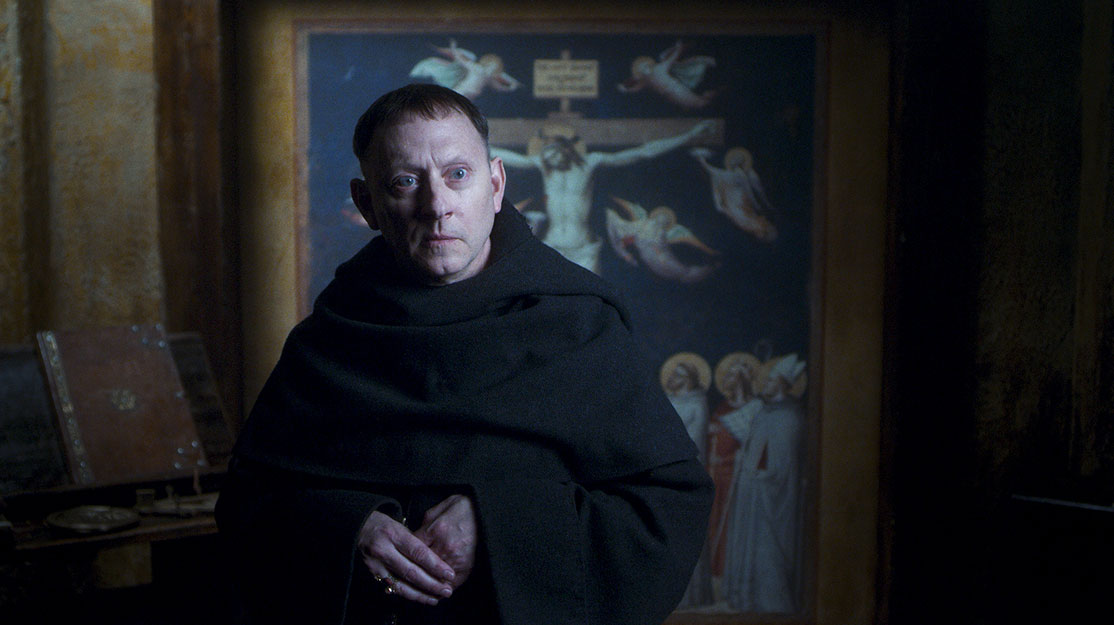 Lost and Person of Interest star Michael Emerson swaps science fiction for the Middle Ages with a starring role in The Name of the Rose. He tells DQ why the part was a dream come true.

After starring in science-fiction series such as Lost and Person of Interest, a murder mystery set in a remote Italian monastery in the 1300s represents a change of pace for Michael Emerson.

But having grown up fascinated by history and the Middle Ages, and naming Umberto Eco’s The Name of the Rose among his favourite books, it’s no surprise that he jumped at the chance to star in a new television adaptation of the 1980 novel.

“It’s a fabulous, dreamy project for an actor like me, who grew up reading too many books,” Emerson tells DQ on the phone from his home in New York City. “I’m keen on history, and the Middle Ages has always had great appeal to me, so it couldn’t have been better. I thought it was a treat.”

Emerson’s interest in the book, which he “devoured” when it was first published, was reignited when he discovered that John Turturro (The Night Of) had signed up to star in a small-screen remake that comes more than 30 years after Sean Connery and Christian Slater led the cast in a 1986 movie version.

“I thought, ‘Oh my God, I’m so jealous,’” Emerson recalls. He got in touch with his agent, who happened to know Turturro. Both actors were also familiar, having performed in the theatre together. “He apparently put in a good word for me and, lo and behold, my pipe dream came true. So then I thought, ‘Oh no, I’m really going to have to do this – and in Italy of all places.’”

Italian producers 11 Marzo Film and Palomar have partnered with Tele München Group and broadcaster Rai for the eight-hour event series, which is due to air next spring. Director Giacomo Battiato co-wrote the show alongside Andrea Porporati and Nigel Williams, with TMG’s sales arm TM International distributing the historical drama around the world.

Set in Italy in 1327, The Name of the Rose follows Franciscan monk William of Baskerville (Turturro) and his apprentice Adso of Melk (Damien Hardung) as they arrive at a secluded monastery in the Alps, where they witness a series of murders. While Baskerville and Adso are searching for the killer, the Pope orders merciless inquisitor Bernard Gui (Rupert Everett) to destroy the Order of St Francis – with Baskerville on his list.

Emerson plays The Abbot, an “anxious and secretive” man who is tasked with holding the monastery together while the search for the murderer gets underway, all while keeping the lid on simmering tensions between the leadership of the Franciscans and a papal delegation.

“He seems agitated but he knows more than he’s saying about the series of murders that are happening at the abbey,” Emerson teases. “In the end, we find out his secrets will be his own undoing.

“He’s a churchman but, like many aristocrats of that day and age, if they weren’t born to be warriors, they might often choose a career in the holy orders. So he’s a man of worldly tastes. He likes good food and precious stones and ceremonies – maybe at some cost to his soul.”

The actor describes The Abbot as a “challenging role,” noting that he could have been played as a stiff bureaucrat. Instead, Emerson decided to have a bit more fun with the character. “I thought there might be some extremes of personality or comportment that might be entertaining, adding to that air of this being somewhere else in time and space,” he says. “I tried to look for some kind of voice that served at least a sense or a hint of period and a life doing the ecclesiastical liturgies.”

The length of this television adaptation, four times that of Connery’s movie, means it is able to be more faithful to the source material, including the discussions about the clash of religious powers that feature in Eco’s novel. Emerson did some research into the abbots, priests and churchmen of the period, but says he needed help with a Latin High Mass he has to perform.

“I grew up as a Catholic schoolboy in the 1950s, so I had been to Latin masses, but the memorisation of it was tricky,” he says. “Even though you know what you’re saying, it’s such a tricky set of vowels and intonations, and then you add to that this droning musicality of a churchman who says that mass every day. There’s some challenge to find that voice and that way of singing the mass.”

Technical advisors were also on hand to help him correctly handle the props and the way he addressed the chalice. “Part of the appeal is it’s just so damned educational,” he says of taking on the role. “You get to feel and immerse yourself in some other time period in a way most people get from reading books, but it’s something else to put on the clothes and be in a church like the Santa Maria in Cosmedin in Rome, where we shot some of the liturgical scenes. To be in a church that pre-dates the time of the story, it’s spooky and it gets under your skin a little bit. It was a wonderful experience.”

During filming earlier this year, Emerson spent three months in Italy, shooting most of his scenes at the historic Cinecittà film studios on the outskirts of Rome. It was there that he performed against a mixture of exquisitely recreated sets and towering green screens, which were used in post-production to create the scale of the monastery, and in particular an octagon-shaped tower that will rise eight stories into the air.

The actor was also impressed by the camaraderie among the international cast, with Sebastian Koch, James Cosmo, Richard Sammel, Fabrizio Bentivoglio, Greta Scarano, Stefano Fresi, Tcheky Karyo and Piotr Adamczyk on the roster. “I just thought everybody was so damned good,” he says. “They clearly all had stage backgrounds and knew how to dig into a character and knew what to do with the language. I was in a state of admiration of everybody’s work because the characters are extreme or very grotesque or very lyrical. Nobody seemed to have any trouble with reaching those levels. I made so many dear friends.”

With actors from across Europe and the US, assistant directors called scenes twice, in Italian and English, meaning Emerson immersed himself in a bilingual experience and even began to pick up a bit of the local language.

“After days of work it just becomes second nature to you, which I thought was useful and became one of the blessings of the project. And it was just fun to trade stories,” he explains. “The life of an actor is so different in European countries than it is in America, and their relish of the work and the process itself would put to shame a lot of the actors I know stateside. I can’t say enough good about the company of this show.”

Emerson describes one of his most memorable scenes as “a passionate moment with a holy statue. I won’t say more than that. It’s part of his private life. He’s a man of worldly passions but can never betray them to anyone else, so he has private ceremonies in his quarters sometimes.”

But despite his eccentricities, The Abbot is a “wonderfully flawed kind of character,” the actor adds. “Although he seems kind of harmless and occasionally even silly, he’s really very dangerous. Maybe that’s just me – I always look for the danger in a character.”

Having become famous around the world for his roles in US network series Lost and Person of Interest, Emerson says he enjoyed finishing a 12-week shoot knowing the project was complete and is now embracing the opportunity to “bounce around” the industry. “I honestly don’t know if I could do an American network series again,” he admits. “It’s a murderous schedule. You find after a decade [across both Lost and Person of Interest], there’s a long list of events of importance to family and loved ones that you have missed or postponed. I’m happy to be able to catch up on my real life a little bit.”

Watch the video below for a first look at the new series:

tagged in: Michael Emerson, The Name of the Rose