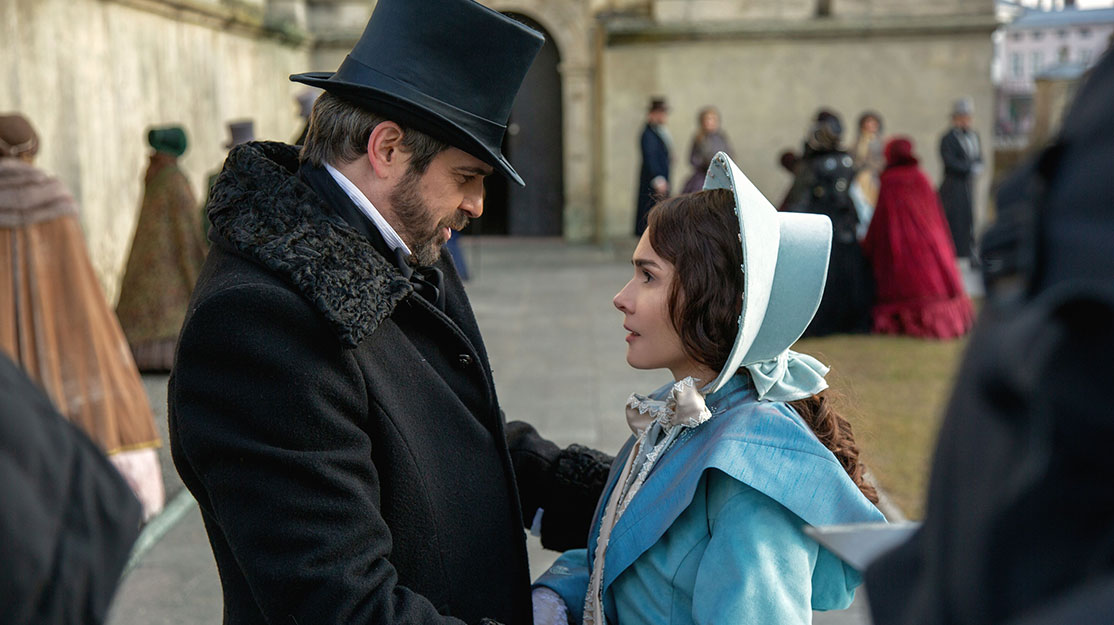 Described as an epic, classical drama, Ukrainian series Cardamom Coffee is a story of forbidden love set at the dawn of the 19th century.

Based on the novel Coffee Melody in Cardamom Tone by Natalia Hurnytska, the story introduces Anna, a young woman who dreams of true love and finds it in the shape of older, married Count Adam.

Distributed by Beta Film, the series is produced by Solar Media Entertainment for STB.
Olena Lavrenyuk (Woman at War) stars as Anna opposite Pawel Delag (Schindler’s List) as Adam. She also produces the 10-part series, which is directed by Iryna Hromozda (Hide & Seek).

Here, Lavrenyuk tells DQ about her dual roles on the series, filming in numerous locations across Ukraine and how Ukrainian television is responding to the Russian invasion.

Olena, introduce us to the story of Cardamom Coffee.
The main storyline is a story of love between Ukrainian girl and Polish nobleman, the story of the misalliance and passion. It is a story of two people fighting for their love against the setting of the historical events of that time.

Were you familiar with Natalia Hurnytska’s novel and did you read it for the project?
I had read the book, which was very moving for me personally. I’ve shared it with all my friends, my mum, everyone. We were really touched by the story. I decided that as it is so appealing, then I should put it on screen. I also really enjoyed this time in the history of Ukraine, which really shows Ukrainians as we are, our culture.

How would you describe Anna at the start of the story?
Anna is an image of a Ukrainian girl who was supposed to dedicate her life to raising kids and living a simple life, a soft, tender girl who was forced to become an Iron Lady. Anna could never imagine the tough events that she will have to overcome. She did not really wish to become strong.

What can you tell us about the show’s theme of forbidden love and how Anna’s story plays out?
Back then, there was a misalliance by age and status, which is why Anna had to make a choice to either listen to her heart or to live the way society dictated. She decided to be happy with Adam, even to agree to be a mistress, which back then was close to social death. Now female empowerment is stronger, but back then it was different and Anna can be considered very feministic due to the choices she made.

How did you prepare for the role?
Being a showrunner, I entered the role so deeply that my colleagues on set were asking me to stop being Anna. In the beginning I wasn’t planning to play Anna at all; I was supposed to play Adam’s wife. But the author of the book insisted on me playing her.

What was it like working with co-star Pawel Delag?
Pawel is an experienced Polish actor and working with him broadened the cultural experience for me. Combining our cultures and realising how close Polish and Ukrainian mentalities are created a powerful symbiosis and also brought out a natural chemistry that many people have noticed.

You were also a producer on the series. How were you involved behind the scenes?
Combining the position of the showrunner and the lead actress was very hard but rewarding in many cases, as I could make changes instantly when I saw that something needed to be improved. Of course, I was involved 24/7 in the process of creating the series.

What was your experience like on set?
As the main heroine constantly travels, there was a challenge on where to find so many locations. To produce the show, we created the largest set ever built in Ukraine – 2,000 square meters – and it was very technological. At the same time there were 35 rooms, some of them were rebuilt and redressed during the night while we were shooting during the daytime.

The series is filmed in Lviv, Zhovkva, Vyshnya and Kyiv. How did you use these locations in the series?
On the set, we’ve built several blocks of the apartments in Lviv and in Zhovkva. As for the cities, we have used all the possible locations. Lviv had a lot of renewed neighbourhoods so we could not shoot everything there. The author of the book suggested Zhovkva, as she had written most of the story there. It was a revelation, almost unknown to the filmmakers. Zhovkva had lots of beautiful locations especially the main square and many of the medieval streets. Most of the exterior scenes were shot there.

Can you tell us about the costumes you had to wear?
We have created lots of costumes; more than 350 were produced in two months despite the Covid-19 lockdown. We didn’t want to use synthetic fabrics as they did not exist back then and also gave a specific glisten that we wanted to avoid. Therefore, we were looking for silks. Some fabrics were ordered from Italy. Some of the brands we worked with have previously worked with Sophia Coppola for [the director’s 2006 film] Marie Antoinette. Our costume designer was looking for accessories such as vintage bags and gloves at the flea markets.

We were also very careful to match costumes to scenes. The colour scheme was very important. In the first episodes the colours are very warm, as the heroine’s life is almost careless. But once she moves to Lviv, the tones get cooler just as the world around her does.

Everything is very symbolic. When she begins wearing a corset, it creates a feeling that she gets locked in the cage. When she presents a dress to her friend, it has red stitches – and the girl dies wearing it later. Nothing is in the shot by chance. We thought through all the costumes down to the last button.

Why do you think this story will captivate viewers in Ukraine and around the world?
The story has already captivated Ukrainian viewers after its TV premiere on STB. There is Ukrainian fan clubs for Cardamom Coffee. We do not have many stories with national nobles of that time, and the culture aesthetics was incredibly beautiful back then. A story about love, however forbidden it is, cannot be right or wrong, it just exists and it makes people relate.

We believe that thanks to the partnership with Beta Film, this grand story of forbidden love will cross all geographical boundaries and captivate millions of viewers with its beauty, plot and acting talent. It is essential for us that this Ukrainian story will receive wide international attention. Stories being created in Ukraine can attract the whole world’s attention, and we hope that our drama will be another confirmation of this

How have you been affected by the Russian invasion in Ukraine?
As all Ukrainians, I guess. First it was a complete shock, it was hard to believe that it’s happening. Then I could not think about anything else. I am constant reviewing all my beliefs, with regards to my profession as well.

How is the television industry being supported at this time?
At the moment the state cannot support content creation as much as has been possible in previous years, as all the money is being sent to support the Ukrainian Army. There are a lot of discussions that are being held with our Ukrainian partner Starlight Media and international partners, and there are initiatives being created. Ukrainian content is becoming much more popular than it was before.

How are you working on new projects and what steps are being taken to continue work in the industry?
We are in the process of developing a second season [of Cardamom Coffee]. The treatment should be ready within a month or so. We are now in discussions with international partners with regards to co-development and coproduction to make the project happen on the European level.