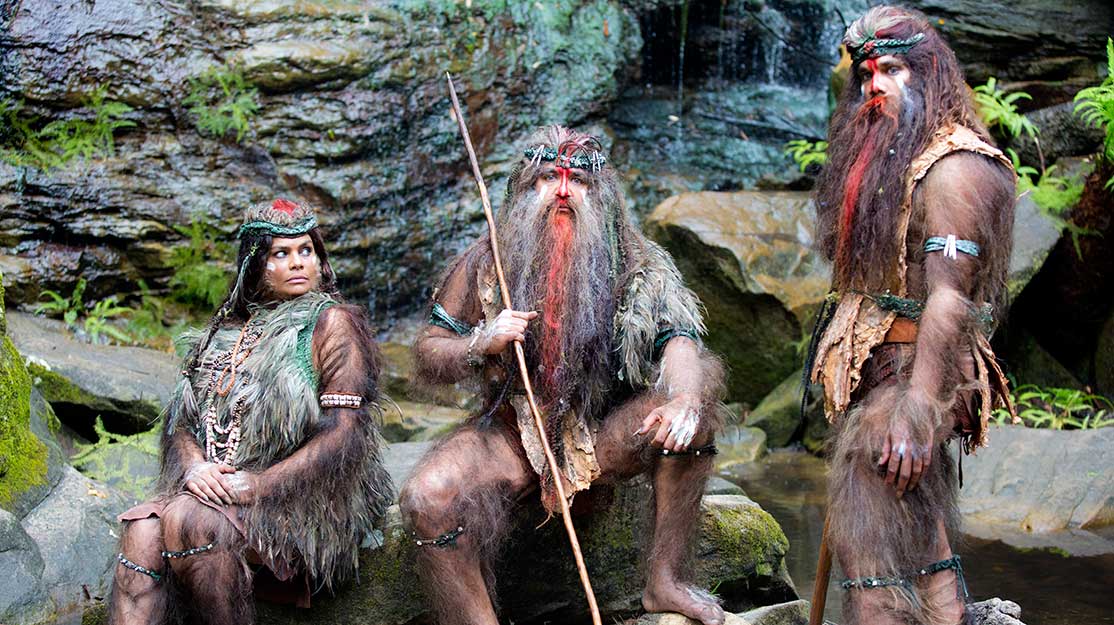 Ryan Griffen, the creator of Australian sci-fi drama Cleverman, introduces DQ to the show’s second season and a new cast of characters known as the Bindawu.

Everyone has seen a superhero movie montage in which the hero is working out the breadth of their powers and how to control them. The first season of Cleverman was, for all intents and purposes, a season-long exploration of this for our main character Koen (played by Hunter Page-Lochard), the eponymous Cleverman, but the same was also true for the entire cast and crew of the series. Armed with the experience of producing our first season, we’ve been able to make a big step up, and it shows on screen.

Season two is again an Australia-New Zealand coproduction between Goalpost Pictures Australia and Pukeko Pictures in New Zealand, a great relationship that has a real influence on the stories, look and sound of the show.

After completing season one, the key creative team really felt they knew where they wanted to head for the next season. We understood our strengths and weaknesses and this informed the scripts. We also had a vocal core audience who were telling us what they wanted to see. The political voice within the show is very much the same but the genre and storytelling dives a lot deeper. We had the advantage of knowing more about our characters, which allowed us to heighten the risk and danger that they play in, by placing them in life-changing situations and watching the effects of this take hold. What really helped this was that all of our season one partners returned, including [Australian broadcaster] ABCTV, [US cable network] SundanceTV and [distributor] Red Arrow International, and they encouraged us to continue to be bold.

Set in the near future, Cleverman sees creatures from ancient mythology, known as the Hairypeople, battle for survival in a world that seeks to silence and destroy them. Their only hope is Koen West, who discovers he is the new Cleverman, a powerful figure in Aboriginal folklore with supernatural powers.

Season two begins after the Zone [a contained area that serves as the home of the Hairypeople] has been razed by the Containment Authority. The humans and Hairypeople have scattered, disappearing deep into the city in fear for their lives. Their only hope lies in Koen realising the full potential of his Cleverman powers, and using them to bring peace to this world. But while Koen’s brother Waruu (Rob Collins) shares the same vision, the lengths he is prepared to go to make it a reality are far more extreme and far more secular. His hunger for the Cleverman’s power and his connection with billionaire Jarrod Slade (Iain Glen) sends the two brothers hurtling towards each other on a tragic trajectory that neither of them sees coming.

From the outset of season two, we explore a striking new location within our Cleverman world, as many of our returning characters come into contact with a new group of traditional Hairypeople, the Bindawu, who live deep in the bushland that surrounds the city. The word ‘bindawu’ means muscle, or strength in my language – Gamilaroi. This new location was a chance for us to take the audience out of the concrete and glass of the city and into the lush green of the trees and beautiful landscape that Australia has to offer, as well as a chance to show our modern spin on Aboriginal culture with the powerful Bindawu.

Our Bindawu Hairies were created by the world-renowned Weta Workshop and Jake Nash, and they are strikingly different from the urban Hairies of season one. The brilliant Sir Richard Taylor from Weta encouraged us to dig deeper into the design of our Hairies, to create an iconic, powerful creature. From this idea the Bindawu emerged, having a huge impact on the direction our season two story took.

Jake Nash, who stepped into the production designer role this season, is an Indigenous man and he has managed the fine balance between our sci-fi world and the 60,000 years of Aboriginal history we draw our stories from.

The Bindawu allow us to tell stories from earlier colonisation in a modern setting, most notably through a new lead character, Jarli (Clarence Ryan), a fiery young Bindawu warrior, and his reaction to the dispossession of the land his family has lived on for thousands of years. With the expansion of the city, the Bindawu are under greater threat than ever – their land is diminishing and with it so too is their ability to openly practice traditional customs and honour their culture. They are forced to live with great vigilance, and in hiding and fear, lest they be discovered.

Our directors, Wayne Blair and Leah Purcell, return with a strong understanding of what our show is about, and they are brilliantly teamed with many returning creatives including Jake Nash, DoP Mark Wareham and hair and makeup designer Kath Brown. Between them, they’ve given the Cleverman world a smarter, more sophisticated look and they’ve found a stunning balance between the lush Australian bush and the darker, more sinister city. For me, the show feels much bigger and it is an honour to be able to showcase what a production team from Australia and New Zealand is capable of achieving on screen.

The Cleverman world has certainly found its legs in season two and I’m very much looking forward to continuing the journey with new and old fans of the show. There are some big story twists, laughs, tears and action ahead, but what is truly exciting for me is that we get to show the world what an Aboriginal superhero can do.

Cleverman season two debuts on SundanceTV on June 28 and ABC on June 29.