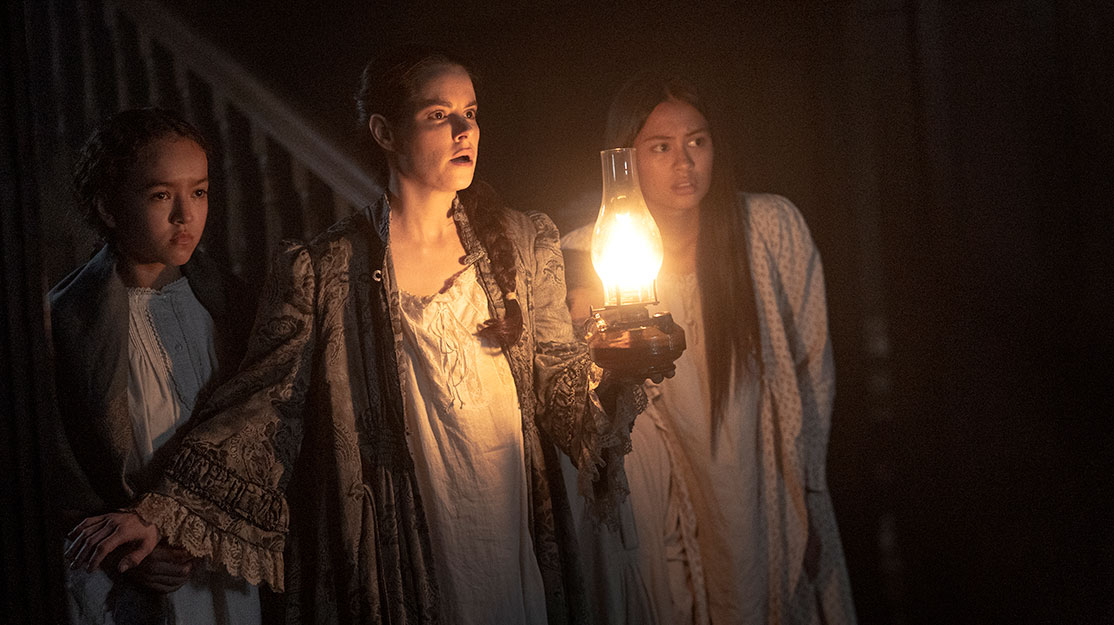 Showrunners Jason and Peter Filardi take DQ on a journey to Chapelwaite, their adaptation of Stephen King’s Jerusalem’s Lot, and reveal how they transformed the horror legend’s short story into a 10-hour series.

First published in 1975, Stephen King’s second novel, Salem’s Lot, told the story of a man who returns to the Maine town of Jerusalem’s Lot, only to find its residents are becoming vampires. Three years later, in a collection of short stories called Night Shift, King revisited the town in a prelude to the novel under the title Jerusalem’s Lot.

Set in the fictional town of Preacher’s Corners in 1850 and told through a series of letters, the story concerns Charles Boone, who arrives at his estranged late cousin’s ancestral home, Chapelwaite – an estate haunted by past tragedies. Charles and his manservant Calvin then discover a map relating to the nearby deserted town of Jerusalem’s Lot, which they decide to explore.

With Salem’s Lot having been adapted for television twice in the past, it’s now the turn of Jerusalem’s Lot, which has been transformed and expanded into a 10-part historical drama called Chapelwaite. The first series produced by Epix Productions for its sister US cable channel Epix, it stars Oscar winner Adrien Brody (The Pianist) as Captain Charles Boone, who brings his three children to his family home in the sleepy town of Preacher’s Corners after his wife dies at sea. There, Boone is forced to confront the secrets of his family’s sordid history and fight to end the darkness that has plagued them for generations.

The show also stars Emily Hampshire (Schitt’s Creek) as Rebecca Morgan, an ambitious young woman who left the town to go to college but has returned home to write a story for Atlantic Monthly. Her inspiration arrives in the form of the Boone family, and she applies to be governess of the infamous Chapelwaite Manor to write about them, leading Emily to unravel a mystery of her own.

Launching on Epix last month and screening at French television festival Series Mania, the series comes from showrunners, writers and brothers Jason and Peter Filardi. While Peter has form in this genre – he co-wrote cult horror movie The Craft and adapted Salem’s Lot as a 2004 miniseries – Jason’s credits include feature comedies 17 Again and Bringing Down the House. Nevertheless, Jason was 12 when he first read King’s The Shining, which “blew my mind, scared the hell out of me” and cemented his love of horror.

Their involvement in Chapelwaite started when the brothers were pitching a completely different idea to Epix president Michael Wright. As they were leaving the meeting, Wright called them back and asked if they would be interested in adapting a King short story.

“Of course, we were over the moon at that,” Jason tells DQ. “We didn’t even know what the short story was, but we were just like, ‘Yes, of course.’ My career’s mostly been in comedy, but I’ve always wanted to get into horror because it’s my favourite genre. I suppose if you’ve seen some of my comedy movies, you might think they were horrors, but for me this was fantastic. It was like a dream come true.”

Approaching the adaptation, the brothers wanted to remain true to the intent and themes of the source material, while they were also aware they had to expand on it significantly to fill 10 hours of television.

“There’s so much that has to happen,” Peter says. “We really mined, re-mined and triple-mined the story, pulling out imagery and atmosphere and characters, even if it’s just a character’s name or a peculiarity, and then building upon that person and trying to remain true to the material as best we could.”

Because of the story’s letter-based structure, “we had to create a whole world around it and add a lot of characters and subplots,” says Jason. “But there are so many great breadcrumbs within the story. It mentions a baby with no eyes, just in passing, but you read that and you go, ‘Oh man, that’s bizarre,’ and then we expand on that because the breadcrumbs are there. It was just about finding them and pulling out the ones we really liked.”

Peter describes the story as King’s ode to Dracula writer Bram Stoker and fantasy and horror writer HP Lovecraft, the inspiration behind HBO’s recent series Lovecraft Country. “We wanted to be true to that,” he continues. “We wanted to include a Lovecraftian element to whatever we came up with – and knowing Jerusalem’s Lot is kind of an unofficial prequel to Salem’s Lot, there’s a certain expectation there. We wanted to fit our story within the Stephen King cosmos, which so many people are familiar with and love so much.”

The Filardi brothers also hail from a small New England town called Mystic, in Connecticut, which was first settled in 1654 and has a history of whaling and shipbuilding. “We’ve always been history buffs and raised with stories of whaling, and once we made Charles Boone a whaling captain, we were able to really connect with the world and the material and marry our own interests and passions and sensibilities with Mr King’s,” Peter adds.

King didn’t work directly with the showrunners, though they say he did sign off on every stage of the project, from approving outlines and scripts to the writers themselves. “I’m sure I only got OK’d because my brother is on it. I doubt he watched Bringing Down the House and decided to hire me,” Jason laughs. “But he has to OK every step of the process. He’s really involved that way. We were hoping he’d do a cameo in the show but, with Covid, this was a whole different beast when it came to filming.”

With 10 hours of screen time to fill, were they worried about taking the short story in a direction King might disapprove of? “I would say a little bit, but not really,” says Peter, who adds that the writing icon recognised their aim to hold true to his original vision and that it was necessary to expand the story.

“I don’t know if he’s like me – if I listen to a song on a record, when I go to see the band live, I’d rather not have the person just play it note for note again. I’d rather have them improvise and riff a little bit. I suspect he’s kind of the same way.”

“What people sometimes forget is my brother and I are huge fans, too,” notes Jason. “The last thing you want to do is disappoint Stephen King. We really come at it trying to keep the sensibilities of his work, but also to make it a little more rich. Ten hours is a lot of television time and you have to hold people’s attention in this day and age with so many choices. That’s a really difficult thing to do. People talk about, ‘Well, they went off on a tangent. They didn’t hold true to the story.’ We really tried because the last thing we want to do is disappoint the fans and ourselves.”

Perhaps the highest compliment given to the series has been from King himself, who tweeted that the show was an “excellent, creepy expansion of my story, Jerusalem’s Lot.” Asked about the public seal of approval, Peter proclaims: “Mission accomplished, we’re ecstatic!”

As well as expanding on the original story, the Filardis have also sought to keep viewers coming back to the series by changing the show’s antagonist as it moves forward. “It seems at first to be man against himself, then man against man, man against unman, and then it takes a final leap into Lovecraftian cosmic horror: man against the universe or a dark aberration of the universe,” explains Peter. “The bad guy keeps changing, and that really helped us sustain thrills and chills.”

But while Chapelwaite isn’t the first time the brothers have written together, it is the first time one of their joint projects has been produced, with each of them having previously built successful solo careers. Both say the series is a mountain neither would have wanted to climb alone, with Zoom meetings and whiteboards used to chart the progress of the story by the writing team during its development phase.

“It’s almost like a house; you build inward,” explains Peter. “You start with the frame and then you’re able to break down each episode and get increasingly detailed. But there’s no sense in getting caught up in the details early on. That’s a trap. You have to look at the big picture.”

The series was shot in Halifax, in the Canadian province of Nova Scotia, where rates of Covid-19 were very low when filming began in July last year, four months after its planned commencement.

“When we got up there, they had no community spread whatsoever, so they were living pretty normally because they had shut down everything,” Jason says. “We were one of the first productions to actually get going during this time. You were always on edge because if there’s one case, you’re shut down and you’re in big trouble, and that’s a lot of money. It’s always on your mind, but we got through the whole production without a single case. It was a miracle.”

Production designer Matt Likely and his team built the town of Jerusalem’s Lot, recreating the look and feel of the 1850s. Mud and horses were common features on the set.

“Anything on horseback is treacherous, and if the character can be walking their horse, we learned it’s a big help,” Peter jokes.

Jason adds: “A period piece is always difficult, from costumes to the look of everything. We wanted natural lighting and lamp lighting to give that gothic horror mood we were trying to get. But mud – boy, it rained and it snowed. We were there for pretty much three seasons, summer, fall and winter, so we got a lot of rain.”

Coming from a features background, Jason likens the TV industry to the Wild West, highlighting the fact there are more networks and platforms to pitch ideas to than ever before but, paradoxically, it’s still very difficult to get a show into production.

“The stars have to align to get something made,” he says. “There are always so many mountains to climb. We were just extremely fortunate that Epix not only gave us the opportunity to make something, but they trusted us enough to be showrunners. They partnered us with an amazing guy named Donald De Line [Ready Player One] to be an executive producer. We were in good hands and we are extremely grateful for that opportunity because we learnt a ton – it was trial by fire.”

That the series – distributed internationally by Sony Pictures Television – is rolling out weekly on Epix is particularly notable, with the fact its finale lands on Halloween offering some indication of the direction of the story. Jason urges viewers tuning in to prepare for “a great, compelling gothic horror story – something we haven’t seen a lot of lately.”

“You also get some amazing performances and it’s spooky and it’s full of dread. It’s exactly what you want to be watching as we head into Halloween season.”