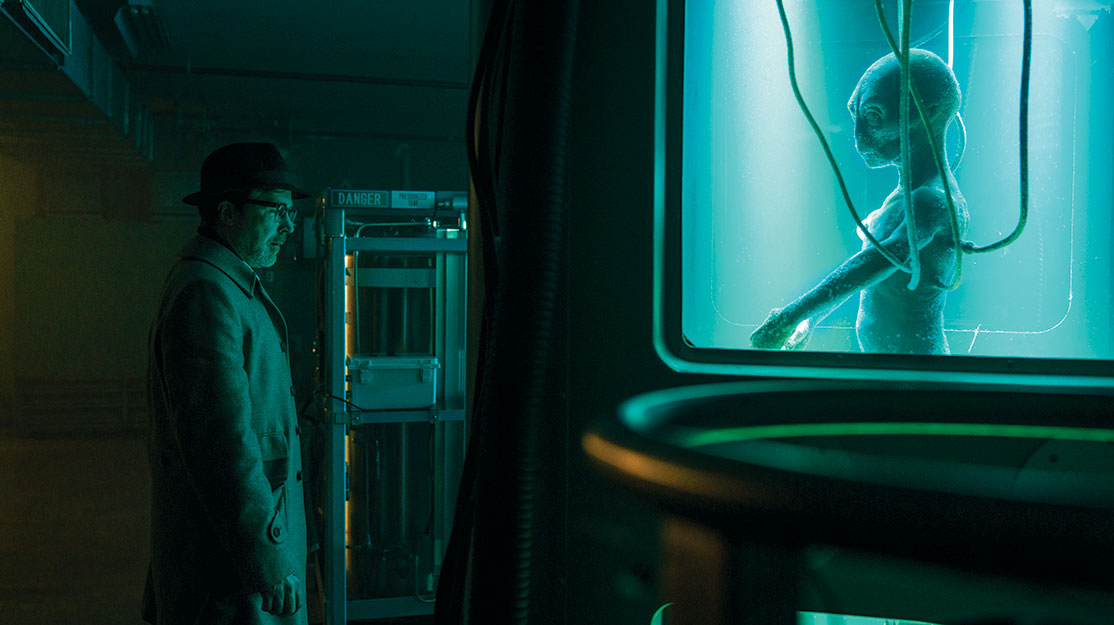 The idea that ‘fake news’ was invented by Donald Trump and Steve Bannon is, well, fake news.

From 1952 to 1970, the US Air Force operated Project Blue Book, a secretive investigation into the UFO phenomenon, looking into sightings and also launching an information war to convince people what they’d seen wasn’t actually what they’d seen at all. Now, with impeccable timing, Project Blue Book is coming to A+E Networks’ History channel in the US, dramatising some of the 700 unexplained cases out of the 12,000 investigated.

For creator, writer and co-executive producer David O’Leary, the project is the culmination of a lifelong fascination with the subject. “I was always reading books on alien abduction and scaring myself as a kid,” O’Leary says. “In my 20s, I started to get interested in America’s strange history with the subject matter.

“There was a great documentary from the late journalist Peter Jennings back in 2005 about America’s history with UFOs and the work of Dr J Allen Hynek, a civilian astrophysicist recruited by the Air Force to explain what people were seeing in the skies. By the end of his tenure with the programme, he had completely shifted sides and become a believer. That was a fascinating story to me and I thought maybe there was a TV show in it.”

O’Leary’s experience to this point had been as a development executive on movies. But like so many in that industry, he was eyeing the opportunities presented by the golden age of TV drama. He wrote a pilot episode, presented it to his feature agents and soon the project was being shopped around.

They got a bite. A big bite. ImageMovers, the independent studio belonging to Back to the Future director Robert Zemeckis was also eyeing TV projects, and the subject matter was a perfect fit. ImageMovers, in turn, took the project to History and producer A+E Studios. Sean Jablonski, an experienced TV writer with credits on the likes of Nip/Tuck and Suits, came on board as co-writer and exec producer, while A+E Networks is the distributor.

“The whole team came together at the same time. It was a great fit,” O’Leary says. “I put together a script and a bible, we developed it for about 10 months and the network started to get really serious about making the show. History has a straight-to-series model, so when they decide to do something, they go ahead and do it. We didn’t shoot a pilot and we were fortunate enough to get a 10-episode order.”

Jablonski, who led a small writers room of five, shared O’Leary’s love of the subject matter, which made a month of solid research less of a chore as they sifted through the cases and picked out the ones that could drive the narrative.

“It’s been a passion of mine for most of my life, so the good thing about the partnership is we spoke the same language and understood the same cases and people,” Jablonski says. “When we would look at Hynek’s books and the cases, it became evident which were right for the first season. We wanted to start with an unreliable witness to something, which could then build over the course of the season into more reliable witnesses, multiple witnesses, credible witnesses. It felt like it had an arc to it.

“The job I had, working with somebody like David, was just to be curious. It was David’s idea; he came to the table with a vision. My job was to be curious and say, ‘What do you think of this? What are you thinking here? What attracted you to that?’ It’s about being able to apply the craft I’ve done working on shows over 20 years and take the ideas and bring them to fruition.”

The end product has been described as Mad Men meets The X-Files, but making drama for a primarily factual cablenet like History comes with an added challenge. The network does have dramas (Vikings, Six, Knightfall) but how much dramatic licence do you get? “Making a compelling, dramatic and engaging TV show demands that you find the cracks in the details of the cases so you can embellish them a little bit,” Jablonski says.

“The great thing about this show is there is a case file we can refer to that spells out the details of the cases we use in the first season. There are more than 700 unexplained cases, each with very detailed accounts, and there’s a lot more research you can do on top. Being writers and researching those stories, you want to find the dramatic moments. The real stories give you the building blocks, but we always remain true to the essence of the original story.”

The next challenge is cutting through a crowded market. There are up to 600 new dramas launching into the market every year, with some colossal budgets on offer at the likes of HBO, Netflix, Amazon and Showtime. How does a project on History get noticed?

“History’s model is they want to be in that top-shelf storytelling space,” Jablonski says. “We approached it in the same way we would if we were at HBO, Showtime or AMC. As partners, they are encouraging us to take a risk, swing big and tell the most compelling stories. I’ve been really impressed with their model and how they approach it.”

Casting is key to this. Aidan Gillen has been secured to play the central Dr Hynek character, fresh from a six-year stint as Petyr ‘Littlefinger’ Baelish on Game of Thrones. Michael Malarkey (The Vampire Diaries) is also on board.

But then there’s also the happy, or perhaps unhappy, coincidence of how the news agenda seems to have come full circle. First of all, UFO sightings are back in the public consciousness following March’s breaking CNN story showing video of an object in the sky over San Diego, shot by cameras on board a US Navy jet.

But more importantly, as a wider point, there is the ongoing debate around so-called ‘fake news’ in the US. “Truth isn’t truth. That was a big piece for Hynek,” O’Leary says. “This was misinformation used to control the public perception, hide the truth about UFOs and explain away what people were seeing in the sky. He was a pure scientist who was always after the truth. It was a theme we felt was topical and timely. UFOs being back in the news as well as the story about misinformation has been great. There are so many parallels between the 1950s and now, unfortunately.”

“The fake news angle to the series is 100% deliberate,” Jablonski says. “We talked about it early on. This was the original fake news story in many ways. The government made a diligent attempt at creating a misinformation campaign to tell people what they saw did not exist. We’re hearing that every day on news in this country.

“Back in the 1950s, we had a fear of Russia, we felt like it was invading our political system and our households. There was a fear of war, a sense of paranoia. It’s very easy to want to use this to comment directly on what’s happening today, but the truth is we don’t have to try very hard, it’s just history repeating itself.”