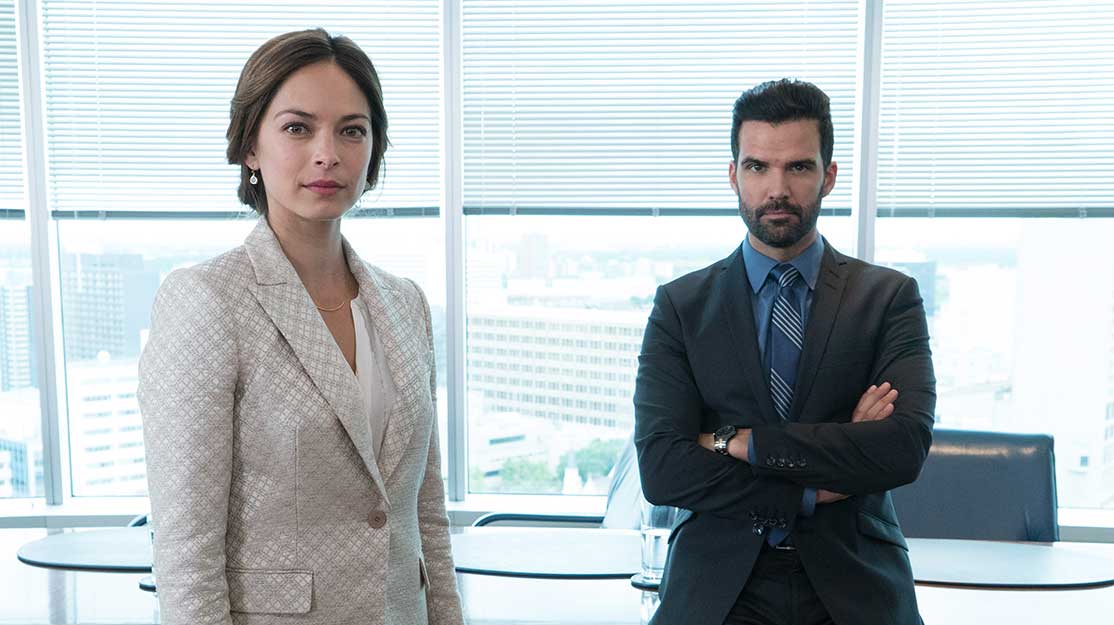 By hook or Kreuk

A year after Beauty & the Beast came to an end, star Kristin Kreuk is heading back to the small screen in Canadian drama Burden of Truth. The actor tells DQ about the attraction of this small-town legal drama with social justice at its core – and her role in bringing the series to air.

It’s been 17 years since Julia Roberts’ Erin Brockovich valiantly fought for a small community in the face of big business, earning the actor an Oscar for her portrayal of the real-life heroine. And now a legal drama in production in Canada is drawing parallels with that story with its own young woman fighting for justice.

Burden of Truth stars Kristin Kreuk as Joanna Hanley, a big-city lawyer who returns to her home town to take on what she thinks is a simple case, only to find herself in a battle to protect a group of sick girls. Running alongside the legal story is a mystery involving Hanley, who left the town in unexplained circumstances as a teenager and begins searching for the truth upon her return.

“The dailies look gorgeous and I feel like we’re doing something different, taking a few risks,” says Kreuk, who is best known for long-running roles in Smallville and Beauty & the Beast. “I’m excited about that. For me, it’s new and also, for a Canadian show, it goes at a slower pace. It’s a serialised drama that looks at things that are pretty topical, from environmental issues through to abuses of power and abuse within families and communities, and also through female empowerment and success. So we’re really looking at topical issues in a slow, emotional way that I feel isn’t common in
legal dramas.”

The Vancouver native, who is also an executive producer on the 10-part show, first became involved in Burden of Truth when she was pitched several ideas for series by producer and distributor Entertainment One (eOne). Burden of Truth stood out, she says, because of the complexity of the lead character, whose seemingly idyllic life begins to unravel when she returns to her home town.

After finishing on The CW’s Beauty, which ran for four seasons until 2016, Kreuk sought a project where she could be involved as much in the storytelling process as she is on screen. So when eOne came to her with Burden of Truth, she was keen to be in the development room and to speak to the writers.

“While we were in the build up to the show, I was involved very creatively, more than anything else,” she says, speaking to DQ midway through production on location in Winnipeg. “A lot of my notes would focus on Joanna herself, so I’ve built this character. [Creator] Brad Simpson and I met very early on and just talked about who she was. We created her together instead of there being someone on the page already.”

Simpson, who is a lawyer, has based Burden of Truth on his own courtroom experiences, says Kreuk, while the actor looked to her friends in the legal business and high-profile Canadian criminal lawyer Marie Henein as the inspiration for Joanna.

“She’s interesting; she’s very much a legal person,” she says of her character. “She doesn’t see herself as a people person. So when confronted with emotional interaction, she really does struggle. It’s not like she has a facade, but I find her human. She’s struggling and you can see that struggle very clearly, even through her hiding in the job, the law and
her work.”

When it comes to choosing her roles, Kreuk says her decision is often based on her reaction to a script, while Burden of Truth represents the first time she has proactively shaped her character from the very beginning of the creative process. It also marks a departure from the supernatural and superhero series for which she has become known.

“I realise I play a lot of characters who have really complicated family histories and who really struggle with the relationship dynamics with their parents in some way, which offers a lot of juice for a character and for a series,” she admits. “But this show is by far the best opportunity I’ve had to explore that. This is not a sci-fi show, we’re not dealing with supernatural beings or creatures. The stakes are more present, pressing and realistic, which I think allows for a different exploration of character.”

That character is now set to join the swathe of strong females leading drama series in 2017, following in the footsteps of The Handmaid’s Tale, Big Little Lies, Doctor Foster and Feud.

“It’s the time of the woman; it’s been a long time coming,” the actor notes. “A lot of people want something other than the shows they’re being presented with. And as women, we want to see female stories and we just haven’t seen them. Simultaneously, opening up positions for women in producing, directing and writing allows for these stories to be told. The fact they’ve done so well and they’re dynamic and interesting has encouraged the creation of more.”

Joining Kreuk among the executive ranks is Ilana Frank, a prolific producer known for series such as Saving Hope and Rookie Blue. Burden of Truth is one of two new shows she is backing for Canadian broadcaster CBC, with pacey detective series The Detail also in production.

“I wasn’t all that interested in doing a legal procedural show but I liked the idea of a show that had the law as the basis for the premise,” Frank says. “I do very character-driven things mostly, or I try to, even if it has a procedural element. So that’s how I looked at this too. It’s about characters and place – the town and the countryside really play an important part.”

Once Kreuk and eOne began developing the series, Frank’s IFC Films came on board before CBC placed a series order based on Simpson’s pilot script and series outline. Eagle Vision also coproduces the show, which premieres on January 10.

“What appealed to me was the idea of it being an Erin Brockovich show, a woman with a mission,” Frank says. “I liked that juxtaposition of what she was and what she’s going to become. It was an interesting journey. I worked with Bradley and brought in Adam [Pettle, showrunner], who I’ve worked with for about 15 years. He and Bradley worked together on Rookie Blue so they knew each other quite well. Kristin was great and she was very much involved in the evolution of it.”

Burden of Truth is shot entirely on location, another first for Frank, who says she is delighted with the results despite admitting to being anxious over the location shoot. “I just love the look of the show and the feel of it,” she adds. “The first season of production [on any show] is always challenging. It’s a bit on the fly. You’re always trying to make adjustments to something because it’s not 100% in place, but the show is going along pretty well. I’m pretty happy with the production of it.”

It is Frank’s theatre background that fuels her attraction to character-building, with the aforementioned medical drama Saving Hope and cop series Rookie Blue more serialised in their approach than traditional procedurals.

“So for me, it’s about actors, character and development. That’s what I love,” she says, noting the importance of casting in any successful series. “Once you give that part to somebody, it takes on a life of its own. That’s really important and my work in the theatre has helped me a tremendous amount in terms of casting, because scripts and casting, that’s all there is. If you have good scripts and good casting, you can make a good show. There’s the formula.”