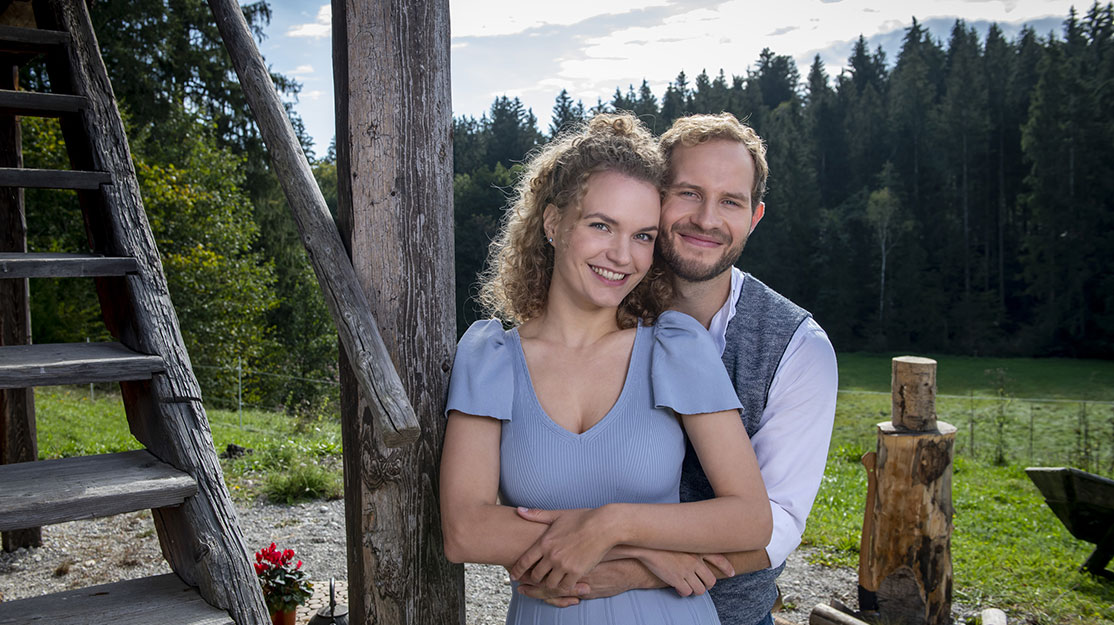 The executive producers of German dramas Sturm der Liebe (Storm of Love) and Die Rosenheim Cops (The Rosenheim Cops) take DQ inside the making of these long-running dramas, which together have amassed more than 4,000 episodes.

With people around the world finding themselves stuck indoors because of coronavirus lockdowns over the past year or so, familiar, long-running TV shows have provided some home comfort during an unsettling period.

In Germany, viewers would have to cast their minds back almost 20 years to remember a time when neither Sturm der Liebe (Storm of Love) or Die Rosenheim Cops (The Rosenheim Cops) appeared in the TV listings. The shows are both produced by Bavaria Fiction, with the latter debuting on ZDF in 2002 before Sturm der Liebe launched on Das Erste in 2005.

Since their premieres, both shows have become schedule mainstays for their respective broadcasters. Crime drama Die Rosenheim Cops will go past the 500-episode mark in its forthcoming 21st season, while daily soap Sturm der Liebe’s episode count now stands at more than 3,500 instalments across 17 seasons. Last year alone, Sturm der Liebe recorded more than 139 million views online, making it the most successful streaming format on German screens. It has also been sold into more than 25 international territories.

Sturm der Liebe’s run is made all the more remarkable by the fact it was initially commissioned for just 100 episodes. Set at five-star country hotel the Fürstenhof at the foot of the Alps, the series focuses on the Saalfeld family, the hotel’s owners, and their employees, as viewers follow numerous interconnected storylines and relationships.

The show came about when executive producer Bea Schmidt was given a brief to create a daily afternoon series for broadcaster ARD’s Das Erste at a time when court series and talkshows were finding favour on rival networks.

“I wanted to create a positive, fictional counterpart with warm, familiar characters,” she tells DQ. “The hotel forms a closed cosmos: on one hand through the characters who work and live in the hotel and inevitably meet each other again and again, and on the other hand through the hotel guests. It is a working and living place that continuously and organically creates new stories through its setup and its changing mix of people.”

With Schmidt attributing ARD’s initial shorter order to caution, a steady ratings climb quickly persuaded the broadcaster to commission a further 50 episodes of the series, which she describes as melodramatic and romantic. It’s a “modern fairytale with a romantic touch and full of intrigue,” she adds.

The series also has a clear structure. At the beginning of each season, a so-called “dream couple” meet without knowing their future lies together, as either both fall in love at first sight and then have to overcome numerous obstacles, or only one falls in love. After many ‘storms,’ the happy ending includes a dream wedding.

Every week, time is reserved for approving the edits of five new episodes and reading new story outlines and scripts. Several times a year, the writers will also hold “Future Days,” on which major storylines for the next six months are developed with head writer Claudia Köhler.

“Since five new episodes are shot every week, five outlines are written per week by three writers under the aegis of the head writer,” Schmidt explains. “These then go to five scriptwriters. In total, we have more than 30 writers who take turns in their work.” Then, on set, two or three cameras capture the action, with one team responsible for outdoor locations and another for shooting interior scenes at Bavaria Studios in Munich.

“We shoot roughly 50 minutes each day, two-thirds in the studio and one-third outside,” the producer adds. “Six to eight weeks after shooting, the episodes are broadcast. It’s a tight schedule.”

After several thousand episodes, ensuring the drama never becomes tired or stale is Schmidt’s biggest challenge. But with just six permanent actors on the call sheet, there is plenty of scope for new love stories, fresh tension and intrigue.

“One of the most exciting storylines was certainly when we almost blew up the hotel with a bomb,” she says. “We changed studios then and used that to our benefit to tell an extraordinary story. I also have very fond memories of foreign shoots in Vienna and Verona – those were outstanding stories with great production values.”

It’s not just at home that Sturm der Liebe has found success, but also overseas, with the show currently on air in Finland, Latvia, Italy, Poland, Austria and Belgium, among other territories. Schmidt puts its international success down to the “true escapism” it offers, with a unique fairytale style which is supported by dream sequences and the show’s setting amid stunning landscapes.

“We are constantly trying to optimise; we never do something just because it has always been done that way,” she says. “We approach the next season with the mindset of creating a new series while, at the same time, keeping our promise with the viewers to tell a modern fairytale.”

Turning the page on romance, Die Rosenheim Cops injects wit and Bavarian charm into the traditional crime procedural, following the town’s finest officers as they try to keep the streets safe. The lighthearted, family-friendly nature of the series also sees comedic side plots run alongside the central mystery – the police in the show don’t carry guns, and there are no frenetic action scenes or grisly shootouts in this world where good always overcomes evil.

“The series keeps viewers in suspense while allowing them to identify with the everyday lives of the characters, all set in picturesque Bavaria with blue skies, mountains, a summer atmosphere and a relaxed, feel-good attitude,” says executive producer Alexander Ollig as production continues on season 21, which will include the show’s 500th episode.

Ollig joined the show 18 years ago, when the series was 44 episodes old, first as an editor at broadcaster ZDF. Since 2009, he has worked on the show in his role as an exec producer at Bavaria Fiction, comparing his involvement with Die Rosenheim Cops to that of a showrunner.

“The main work is developing the scripts,” he explains. “I read all the scripts and attend all script meetings. I’m also involved in the casting, go on the recces, watch the dailies and attend the approvals. From reading the first script through to the finished episode, I oversee every step of the process and work closely with ZDF’s editor, Christof Königstein.”

Writing on the 21st season began last summer, with filming starting last month and due to continue until the end of this year. Unusually for a long-running series, there is no head writer or writers room. Instead, eight writers pen their own scripts from the initial idea to the final draft, which will then be ready for shooting.

“There are many fixed rules for the authors to follow, as we exclude a large number of crimes: no hostage-taking, no kidnapping, no excessive violence, no sexual crimes, no drug-related crimes,” Ollig says. “Our cops don’t carry guns; there are no shooting or car chase scenes. We also don’t show any children in the series. For the viewers, the murder is presented like a quiz: one person is dead and three or four suspects could have committed the crime. The viewers don’t get to know the victim, there are no flashbacks. The bad guys are always murdered, while the dead person always has unpleasant character traits – they’ve cheated on their business partners or their wives.

“The killer is always a bad person with clearly comprehensible motives such as envy, greed or jealousy. We do not have perpetrators who act on impulse or have psychological disorders. At the end of each episode, the crime is solved and the guilty person is sent to prison. In addition to the crime narrative, an everyday story is included which is dramatically condensed in such a way that it is entertaining and amusing for the viewer. We always keep to a level of pure, cheerful entertainment.”

Similarly to Sturm der Liebe, Die Rosenheim Cops splits its filming schedule between Bavaria Studios and external locations to create a world that viewers can easily understand. The arrival of new inspectors creates the potential for fresh narratives, while Ollig is keen to avoid any stories that may be repeats of earlier episodes.

“Great ideas can be found everywhere, you just have to look for them,” he says. “There are quite a few creative highlights – most recently, a vegan who was killed with a carrot. I also have great memories of being on set. Once, we were filming on a mountainside and shooting was about to start. All of a sudden, someone noticed the handbrake had not been applied on a car, and the next thing you saw was eight people running frantically after it to stop it running down the hill. Just a couple of weeks ago, our director was so absorbed in his work he fell into the lake – which had a water temperature of 4°C.”

More than 400 episodes into the series, finding new story ideas can be difficult, with the writers challenged to find increasingly creative ideas that still fit within the boundaries of Die Rosenheim Cops’ structure.

“Other crime formats solve this problem by showing more complex and violent cases and more action, but we do it with our everyday storyline,” the exec notes. It’s those more familiar aspects of the series that give Die Rosenheim Cops its relatability, which Ollig says has been the key to its success.

“The viewers get what they expect,” Ollig continues. “There are no sudden surprises like dramatic crime stories or medical themes popping up. They know they will be entertained and will not be shocked by excessive violence or confronted with unpleasant topics. They can sit back for 45 minutes and enjoy light entertainment.”

In March, Sturm der Liebe was renewed for two more seasons, while the recent production of another 90-minute special of Die Rosenheim Cops to air later this year suggests Ollig will be working to ensure the crime show continues to evolve beyond season 21.

“We sit down every year in the summer, when the scripts for the next season are written, and discuss what worked well in the last season and what didn’t work quite so well,” he says. “We have to stay on top of things – changing gears if it feels the content may be getting boring is too late. Never rest on your success.”