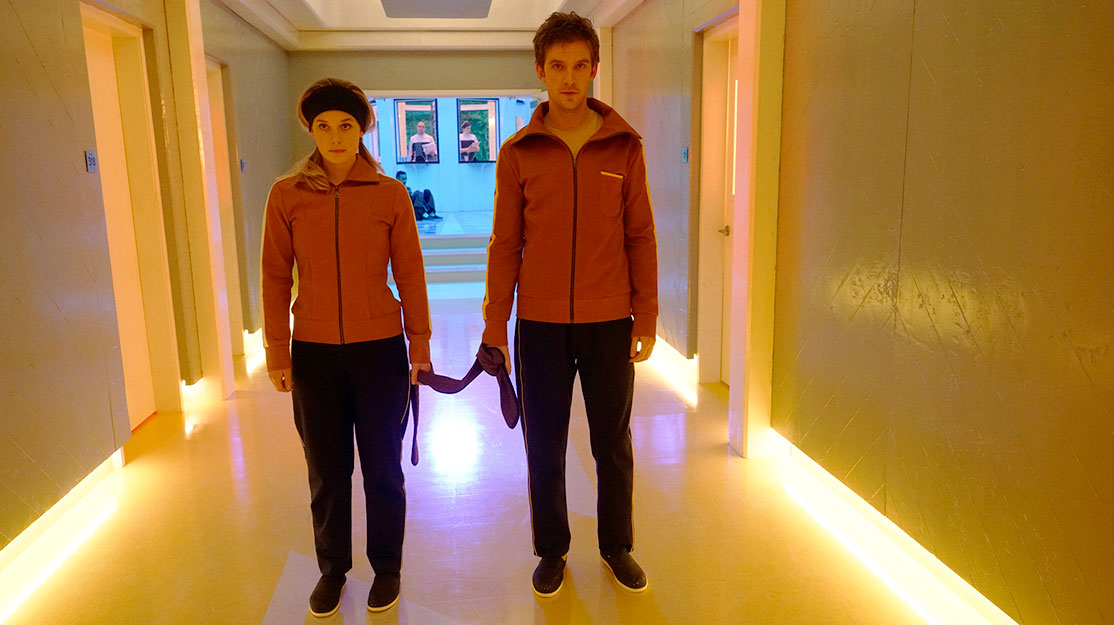 A Clockwork Orange provided some of the inspiration behind the look of FX’s latest original series, Legion. Production designer Michael Wylie tells DQ how he created this unique world.

Stanley Kubrick’s dystopian film A Clockwork Orange, the 1970s and the brutalist architecture movement of the mid-20th century might not appear to have much in common, but blend them together for a television show and you might come close to creating something that looks like Legion.

The new drama from Fargo creator Noah Hawley, it is based on the Marvel Comics by Chris Claremont and Bill Sienkiewicz and is the first TV drama with a connection to the world of X-Men.

The story follows David, a schizophrenic whose strict daily routine inside a psychiatric hospital is upended by the arrival of a new patient, Syd, after which he begins to confront the possibility that the voices in his head and his visions might actually be real.

The cast is led by British actor Dan Stevens as David – the actor is unrecognisable from his stint as Matthew Crawley in Downton Abbey – with Rachel Keller (Syd), Aubrey Plaza (Lenny) and Jean Smart (Melanie Bird).

But while the show stands out for its take on mental illness and its comic book origins, it is the look and design that really demand attention.

From the retro costumes, the futuristic, space-age sets, psychedelic lighting and its disorientating soundtrack, Legion is a work of art.

Much of that success is down to the efforts of production designer Michael Wylie, who has previously worked on Grimm, Masters of Sex and another Marvel property, Agent Carter.

“We had a blast doing it because it’s just fun,” he tells DQ. “When you get to do weird stuff, it can either be really hard or really fun, and thankfully it was really fun!”

Wylie interviewed for the job in November 2015 and just weeks later, in January 2016, he was in Vancouver preparing the pilot, in which almost everything on screen was built by Wylie and his team.

He recalls that first meeting, sitting down with exec producers Hawley, John Cameron and Lauren Shuler Donner. Hawley, who is meticulous in his preparation, had already compiled and printed a book of images that conveyed the feeling he wanted for the show, which is produced by FX Productions and Marvel Television and distributed by Fox Networks Group Content Distribution.

Wylie had prepared something similar, and he was pleased to find that they had both picked out several of the same images.

“Noah’s book was 20 pages of really cool imagery – a lot of 70s stuff, a lot of stills from A Clockwork Orange and there were a lot of interiors of brutalist buildings around the US and the really cool one in A Clockwork Orange,” Wylie recalls. “I had pulled a bunch of images I’d put on my iPad and I think we had four of the same exact pictures. It was a match made in heaven, I guess.”

Wylie had specifically avoided any of the comic book artwork or anything related to the established X-Men universe to ensure his own vision wasn’t contaminated by existing works. Instead, he took Hawley’s detailed pilot script and ran with it.

“He just thought instead of trying to hide them, let’s try to embrace them. It’s kinda like you’re shooting LA for Boston and you run around trying to not shoot palm trees all day long. At the end of the day it would have been cheaper to film in Boston. So we decided to embrace it all.”

That the pilot’s 70s vibe – which largely comes from the colour and design of the psychiatric hospital and the characters’ clothing – has been such a talking point since its launch on FX in February was a surprise to Wylie, who admits the whole show has been designed to keep viewers off-balance, as though they are seeing events unfold through David’s eyes.

“We started to use a lot of colour that happened to give that feeling,” he explains. “There is a lot of yellow and it seems to be a hip colour, but the last time it was a hip colour was exactly in 1973. I think that’s why it feels kind of 70s, and I know some of the costumes are kind of 70s.

“That was all by design with Noah and [costume designer] Carol Case. They really wanted to confound the viewer as to where they are. Our ideal is to make the viewer feel as crazy as David feels. Things shouldn’t match and things shouldn’t be anything that a viewer could really look at as a point of reference. You always want the viewer to feel like they don’t know where they are; they shouldn’t recognise these rooms with big round windows, or that have giant goats in the middle of them. It’s all meant to keep the viewer on the back foot so they can have a subjective experience, just like David is.”

In particular, the use of new technology was key to creating this environment. The whole appearance of the hospital set could be changed by manipulating the LED lighting on set, so every scene feels slightly different.

“It’s almost imperceptible how much you feel disorientated by a lot of things in the show, especially the soundtrack. You hear voices, there’s banging and there’s things to distract you that you would never normally do in a TV show,” Wylie notes. “You want to hear what the people are saying and you notice in the sound editing of the show, they just keep making loud noises. Normally a writer would be really precious about making sure you don’t do that so you can hear every word they’re saying, but I don’t think Noah wants you to hear every single word, or at least he wants you to be confused or hit your rewind button on your DVR a bunch of times.”

The hospital sets were also used to bewilder viewers. The pilot includes several long takes that follow characters around the facility, but in practice the set wasn’t that large. According to Wylie, “there’s some camera trickery there because the room is an octagon, so although the actors change direction, you feel as a viewer like they’re still walking in the same direction.

“We had limited space and limited time to build stuff so I worked really closely with Noah to achieve what he wanted. In the pilot there’s tons of overhead shots, so that’s a special kind of build and when you’re doing lots of overheads you really have to concentrate on the floors in places where normally you don’t care too much about. So during the [Bollywood-inspired] dance number in the day room at the psychiatric facility, that floor was specially made for the overhead shot of people dancing.”

Wylie recalls that in the past, huge sets would have been constructed, lit with dozens of lights above removable ceiling panels. However, sets today are much more like real locations. “They have ceilings, floors and windows and a lot of times they get lit through the windows we provide,” he says.

“The big challenge for the art department now is we’re designing a lot of lighting because they can be part of the set. Everything’s gotten a lot simpler.”

World building isn’t anything new for a production designer; indeed, every new series begins life as a couple of sketches or models. But few dramas are as all-encompassing as Legion.

“I did a show called Pushing Daisies [Bryan Fuller’s quirky comedy drama for ABC in 2007], where we created a whole world for them to inhabit,” Wylie recalls. “So I’ve done these kinds of things before. A couple of years ago I did another Marvel show called Agent Carter, where we did 1940s New York City. I get to do a lot of shows where we create a lot and we’re not just shooting on location or turning the camera on to something that’s already existing.”

And with the increasing popularity of sci-fi/fantasy dramas that require their sets to have an other-worldly quality, Wylie believes this trend is pushing production design further into the spotlight than ever before.

“If you get 10 or 12 hours to tell a story on TV as opposed to an hour and 45 minutes in a movie theatre, so you’ve got to make it great and make a splash,” he continues. “I always say people sometimes disregard art direction as background, but when you’re telling stories like this, you can’t disregard the background because it’s part of the story.

“I don’t think people tune into TV to see what they see in everyday life, they tune in to see something much different from their real lives. I’m a big fan of going over the top, even when it’s not called for!”