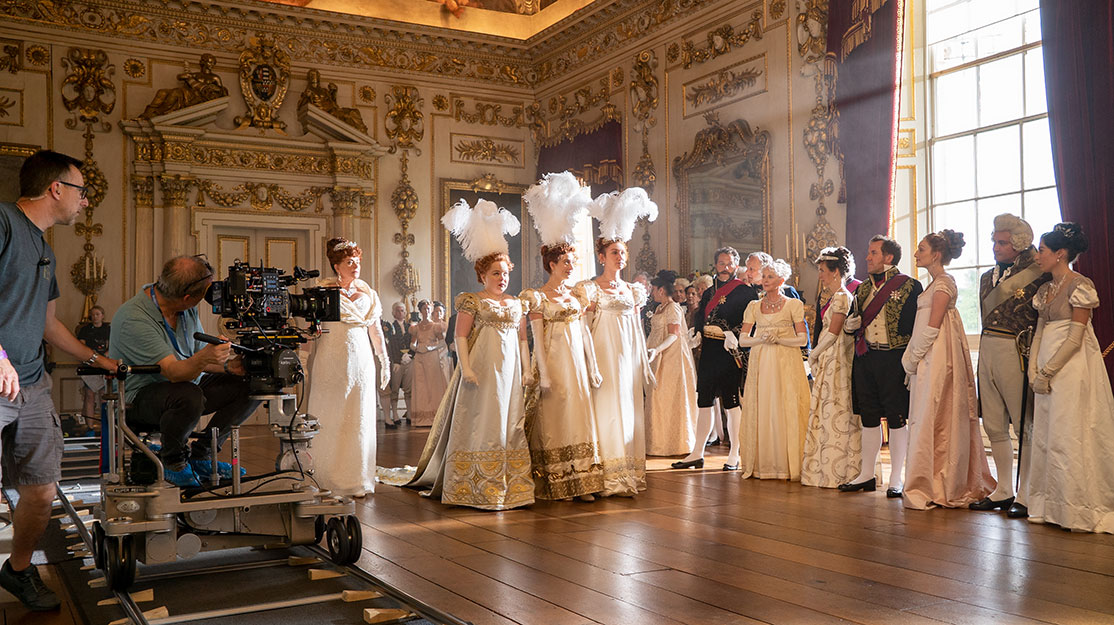 A former paint factory in Uxbridge, on the outskirts of West London, is home to the most audaciously ambitious, visually stunning and deliberately historically inaccurate costume drama for several decades.

Bridgerton, which will launch on Netflix on Christmas Day, is costume drama sexed up and jazzed up. But then who would expect anything else from the first series in the genre to be made by Shonda Rhimes’ production company Shondaland?

Based on a series of bestselling Jane Austen-inspired books by American romance writer Julia Quinn, this is Regency romance as it has never been seen before. Everything is louder, brasher, brighter and sharper than normal. This is a heightened world of heaving bosoms and brooding bucks in breeches, and could be just the shake-up that the normally staid and conventional world of period drama needed. It will certainly be the show everyone is talking about this festive season.

“Period pieces are usually just a little traditional and conservative, and that wasn’t what I ever wanted Bridgerton to be,” says the series writer and showrunner Chris Van Dusen (Scandal). “So I set out to make a period show that I wanted to see; one that turns this traditional genre on its head and made it something new, fresh, relatable and topical.

“The Regency period was a crazy time of decadence, excess and glamour, and we sought to reimagine that time period in a way that hasn’t really been seen before. It is sexy and dangerous; a really wild ride.”

Evidence of the sheer ambition – and budget – of the series is there in the paint factory. Almost the entire thing – all 100,000 square metres of it – had to be sound-proofed before any work could even start. Walls were built to create several stages that could be used at the same time. Even the canteen feels like an airplane hangar. It took 80 people four months of work around the clock to create the sumptuous sets just within the paint-factory-turned-studio.

One of the stages is still wet when DQ visits. It is the scene for a key moment towards the end of the series and is the last of a series of balls our romantic leads have attended. There’s a chequered black and white floor, surrounded by flower beds – all the flowers are real – and then the façade of a huge balconied house.

Most production companies would have used one of the UK’s grand estates and a rain machine. But because this rainy scene was going to take three days, the decision was to build this incredible stage. It is raised eight inches off the ground, with a special drainage system to allow all the water to seep away. Above us is a huge kettle the size of a petrol tanker that allows the water to be warmed up so the rain that will fall on the actors is warm rather than cold.

“It takes two days to heat up the water but it allows us to have people standing around for a long time without getting too cold,” says production designer Will Hughes Jones. “The scene has been a major task, but then a lot of it has. People’s jaws just dropped when they came onto these sets.”

Most of the furniture and rugs were made specifically for the series – costume houses didn’t have any big enough – although a Georgian pianoforte, played in the Bridgerton house, was bought and restored to give an authentic sound.

This is a production where every costume – more than 9,500 in total – was hand-made by a team of 232 people. On top of that, a further 200 wigs, many of them customised for the key characters, were also created. Bonnets were declared out, while costumes retain a Regency look but very much have their own ‘high fashion’ modern aesthetic.

As for filming venues, more than 30 outside locations, mainly stately homes, were used.
The series focuses on the aristocratic Bridgerton family, comprising a widowed mother and her eight children, as they all search for love.

This first season concentrates on the ‘coming out’ season of Daphne (Phoebe Dynevor), the eldest girl of the eight siblings, who have been named in alphabetical order (Anthony, a Viscount, is followed by Benedict, then Colin and Daphne).

A beauty, she is immediately declared one of the diamonds of the 1813 season by Queen Charlotte (Golda Rosheuvel) and her success seems secured in the ‘marriage mark’ in which she needs to find a suitor. But her big brother Anthony (Jonathan Bailey), who is the head of the family, is so picky about her suitors that he frightens them all away.

Her reputation nosedives when her failure to attract a suitor is pointed out by Lady Whistledown (voiced by Julie Andrews), the mysterious 18th century version of Gossip Girl, who writes a scandal sheet revealing the weekly gossip of the aristocratic set.

In despair, Daphne agrees to a deal with her brother’s friend, Simon Basset (Regé-Jean Page). As a handsome and wealthy duke, he is one of the most eligible bachelors around but he is determined not to wed. Pretending there is an affection between them will make Daphne more alluring to other possible suitors while keeping the jostling debutantes and their terrifying mothers away from him.

But then their plan quickly begins to go awry, and they go on a journey of learning about feelings together.

“Daphne starts off very much conforming to the rules of society in order to make her family proud, but this series is really about her finding out about herself,” says Dynevor. “At the start of the series, she doesn’t even know what sex is; it’s never talked about.”

Meanwhile, the Duke learns about himself through Daphne’s friendship and, like all romantic heroes, that involves fighting his own demons. “He has the full package – literally everything people would want, including a stormy, troubled, untameable soul,” says Page of his character. “One of the things we’ve enjoyed talking about is why our dark romantic heroes – Darcy, Heathcliff, Poldark – are all so emotionally stunted. It is interesting to explore in the series.”

The series also focuses on the Featherington family who live across the road from the Bridgertons. Ben Miller and Polly Walker play the ridiculously ostentatious Lord and Lady Featherington, who live way beyond their means. Sadly, their three daughters, Penelope (Nicola Coughlin), Prudence (Bessie Carter) and Philippa (Harriet Cains), aren’t having very much luck on the marriage mark either, even as family friend Marina Thompson (Ruby Barker) is surrounded by suitors.

Much is made, in both the production and costume departments, of the differences between the more classical Bridgertons and Featheringtons. While the Bridgerton house is based on a Wedgewood palette of pale blues, the Featherington house is given a “Versace look.” Thankfully, there was a Georgian furniture maker called Thomas Hope who featured lots of golds and blacks and was able to provide some inspiration.

Not only are the costumes and buildings much more than viewers are used to seeing in romantic costume dramas, but so are the sex scenes. The show worked with intimacy expert Lizzy Talbot to ensure all the actors felt comfortable about what they were being asked to do.

“At least 24 hours before we do a sex scene, we spend time with the other person and Lizzy to talk about how we are going to do it,” says Bailey, who appears naked in his first scene. “You start fully clothed and then, as you take them off, Lizzy brings out her bag of things which help; there are yoga balls, small mats and cushions, which mean you aren’t on top of each other.

“There is always a three-layer barrier between the actors. Everything is choreographed and then checked by the director to make sure everyone is happy with it. And then a contract is signed explaining exactly what the actor is happy to do and what parts of their body they are happy to be filmed.”

Shondaland productions including Grey’s Anatomy, Scandal and How to Get Away with Murder have become well known for their ‘colour blind’ casting, and Bridgerton is no different. Queen Charlotte is black in the series, played by Guyana-born Golda Rosheuvel. This plays on the real history of the wife of ‘mad’ King George III – she is believed, by some historians, to have been of African descent.

This is about the Shondaland brand creating “a new pop culture,” according to half-Zimbabwean Page. “The modern sensibility of the series is very much a Shonda brand,” he notes. “They never shy away from making sure they leave the world a better place.”