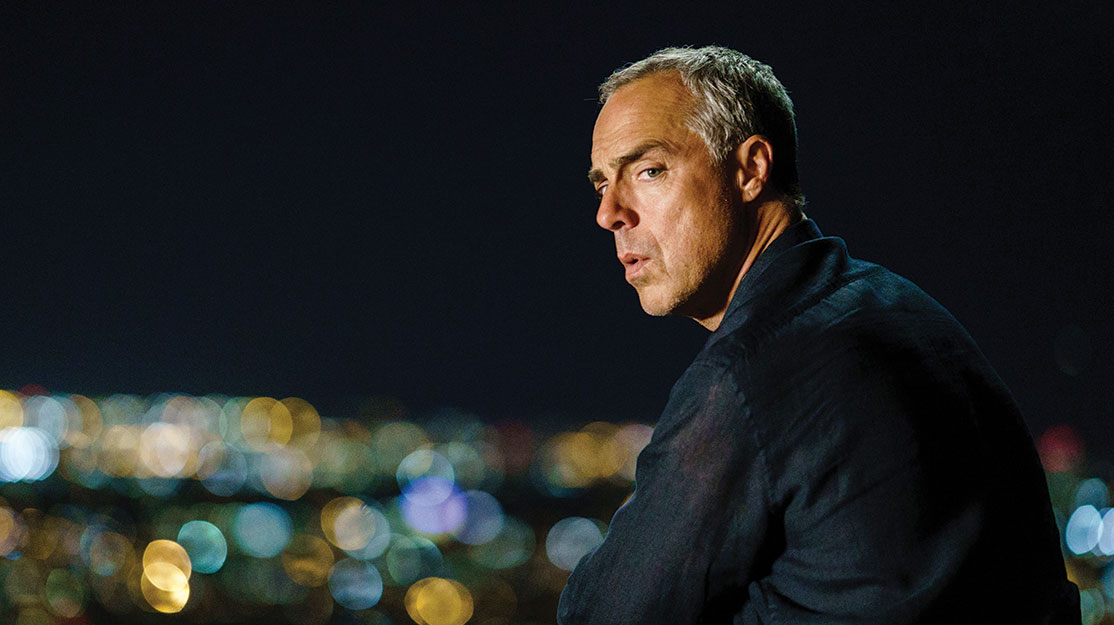 As Amazon’s original crime drama Bosch heads into its third season, award-winning author Michael Connnelly tells DQ how his literary creation has been brought to life on the small screen – and why he thinks the series can run and run.

Since his first appearance some 25 years ago, LA homicide detective Harry Bosch has featured in more than 20 novels written by Michael Connelly.

But for the third season of Bosch, Amazon Prime Video’s flagship crime drama, which launches on April 21, the character is going back to the beginning.

Bosch’s literary debut came in 1992 thriller The Black Echo, and that book forms part of the main narrative of the forthcoming third instalment of the TV series, alongside Darkness More than Night and some remaining strands of The Last Coyote, which also featured in season two.

Adapting his stories for the screen with Amazon has been a fulfilling journey for Connelly, who splits his time between his home in Florida and Bosch’s LA set, where he admits he spends most of his time during production.

“You can’t ever imagine an adaptation happening, you just have to keep your head down and write the best book you can and hope for these kind of things,” he tells DQ during a break in production for the season three finale in November 2016. “It’s not like I never thought about it! In January it was 25 years since the first book came out about Harry Bosch, and that book is the subject of this season – so to have this happen all these years later, it’s really fulfilling beyond words.

“It’s hard to explain how cool that is. And I’m involved in the show – I’m on the set almost every day. It really is amazing. It’s a big city of people, almost 150 people all working on the show and they’re all there because 25 years ago I was in a room by myself and wrote about this guy named Harry Bosch. That kind of journey is amazing and very fulfilling.”

Developed by former showrunner Eric Overmyer (who stepped down in January to run Amazon stablemate The Man in the High Castle) and Fabrik Entertainment for Amazon Studios, Bosch was among the drama pilots launched in early 2014 by the then-nascent streamer, which allowed viewers to leave feedback that would be used to determine whether a full season would be ordered.

The show, distributed internationally by Red Arrow International, was an instant hit and season one – based on Connelly’s novels City of Bones, Echo Park and The Concrete Blonde – launched in February 2015. Season two, which drew storylines from Trunk Music, The Drop and The Last Coyote, launched in March 2016.

Season three was ordered shortly afterwards, in April 2016, before Amazon took the unusual step of picking up a fourth season in October that same year – before season three had aired.

It’s a rare but treasured position to be in for Bosch’s cast and crew, who can now plan to take the series towards its 40th episode.

“The main thing [about having season four] is all the writers on the show know that at the end of the third season, they don’t have to worry about where they’ll work next!” Connelly jokes. “That also entered into our discussions about what we tie up, don’t tie up or set up for season four. It’s been extremely helpful. Here we are wrapping up episode 10 and last year we didn’t know if we had any future, even though we left some things open. This year we know there’s a future so we’re planting bigger seeds, bigger stuff to carry forward. There is much more of an open-ended feeling to the finale this season.”

Which books will form the basis of season four, which is likely to air in spring 2018, comes down to Connelly and new showrunner Daniel Pyne, who will meet early in the pre-production phase of the new season to discuss the best way to develop Bosch’s character on screen.

“That’s why we didn’t start at the beginning [of the books], we started with City of Bones where it was a case we thought would provide an emotional connection for Bosch and things would come out of that,” the author explains, adding that, after two seasons, the creative duo are now preparing to take the detective into murky moral conundrums.

“Darkness More than Night has always been one of my favourite books and really examines ideas about justice, vengeance and the differences between them,” Connelly continues. “It’s not the greatest portrait of Harry as a hero, but we felt in the third season we could explore that. And now that we have a fourth season, we’re even happier about that because, no matter how low you go, if you know there’s another story, there is always redemption in the next season.

“That’s how I approached it in the books. Harry reaches a personal low point in Darkness More than Night but when I was writing that I knew there would be a book afterwards so that I could bring him out of the abyss. That’s what has happened now with the TV show – we know there’s a fourth season and it’s like a light at the end of the tunnel that’s going to draw Harry out.”

Connelly has written five episodes of the TV series so far, including the third season finale, and it’s clear he is relishing seeing the character he created being brought to life on television. Admitting he’s “very much involved” in the writing process, the author reveals that he works alongside Bosch’s six writers to produce scripts, sometimes rewriting episodes or individual scenes.

“That’s where I’m most involved and can give the most,” he continues. “Then eventually you get into production and I love that because all these people are endeavouring to make a show about a character I created a long time ago. It’s very cool. But I have to say, that’s where my skill set drops off tremendously! I don’t know much about camera angles and production co-ordination, so I’m really there almost as a cheerleader to encourage people, especially the actors and the director, and give the thumbs up when needed.”

It’s a big contrast to the solitary life of a novelist, but Connelly says being in a writers room reminds him of his early career as a crime journalist, first in Florida and then at the Los Angeles Times.

“It’s quite different writing,” he adds. “When I’m writing books, I’m constantly inside Harry Bosch’s head and I know what he’s thinking. You never have any of that in the scripts, so it’s a good challenge for me at this point in my life to think in terms of delineating Harry’s character by what he says and what he does and not on the much easier component of interior thought.

“He’s very much the same character [on TV as in the books], he’s just on a different timeline. The guy in the books, I’ve aged him in real time so he’s mid-60s. Titus [Welliver, who plays Bosch on screen] is 55 and that’s a big difference. I’m 60 years old and I feel quite old compared to the Harry Bosch in the TV show. So in a way, they’re different animals – Titus is fantastic as Harry Bosch, he’s perfect, but he’s not the same guy I’m writing about these days when I sit down to write books.”

Alongside Bosch, the other central character in the Amazon drama is LA itself, echoing the presence of the city in the works of Connelly’s literary hero, Raymond Chandler. It was his job at the LA Times that first brought the writer to the City of Angels, which he argues is as complex as the detective at the centre of his novels.

“It’s just a very difficult place to get your arms around, to understand, so it’s like an ongoing, ever-revolving mystery – the kind of place where you feel compelled to look over your shoulder – and that makes it a great place to build fiction around,” he explains. “We carry that over into the show. We have a certain realism and gritty tone to what we’re filming and it’s an attractive way to portray the city. We want to have a lot of scenes that show the vastness of it. There are millions and millions of dreams here and, somewhere, something really bad has happened.

“For whatever reason, LA has a fascination for people around the world. I know I’ve benefited from that as a book writer, and it’s the same when it comes to television. It always comes down to LA as a mystery. It’s a real hard place to understand. I first visited in 1987 and would be the first to say I don’t really know this place as well as I know the town I grew up in.”

As an early adopter of SVoD platforms, watching television on his laptop, Connelly says Amazon was a natural home for a show based on his books, which have a pace to them that also benefits from the opportunity to binge entire seasons in a short space of time.

And when the show first went into development, the author had ambitions to reach 60 episodes. With 40 now guaranteed with Bosch’s fourth season commission, Connelly now sees no reason why it should stop after season six.

“It would be fantastic if it ran and ran, but we’ll see,” he says, adding a note of caution. “There are plenty more plots, it’s just more about whether we have said all we need to say about Harry Bosch. That goes for the books as well, where there’s more of a finite constriction because he ages in real time – he’s a private eye in the latest book and that can last at least a few more years.

“If I do ever reach a ceiling of forward progression with him, I can always go back and write about him in the 80s, 70s or even the 60s, so it’s really about what inspires me,” Connelly adds. “But I don’t think there’s any limit on Bosch as a literary figure or a television figure.”