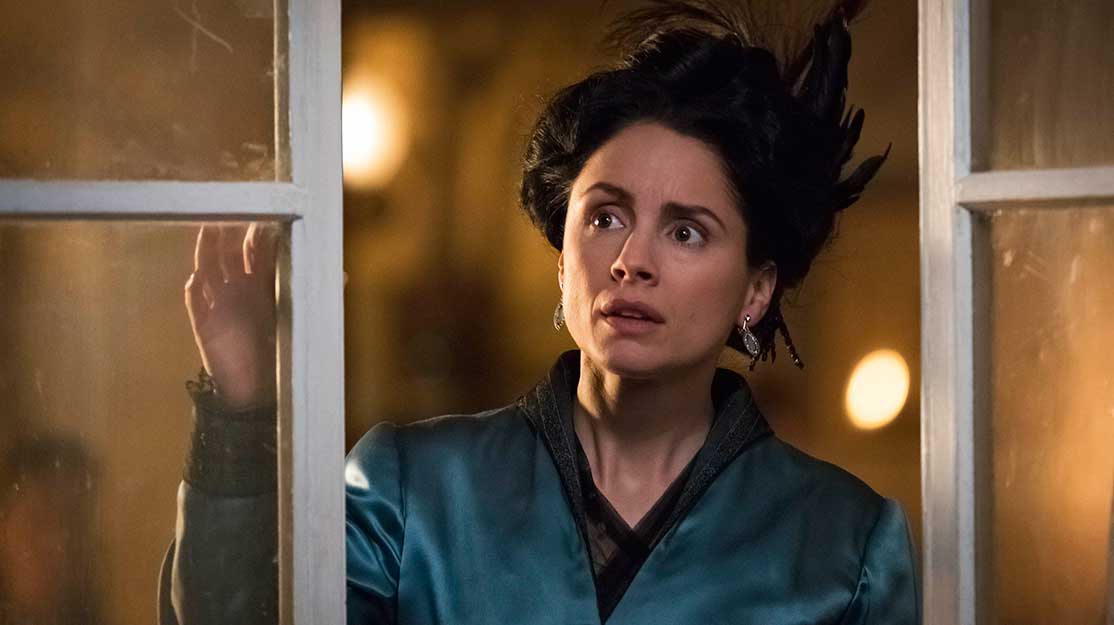 After starring in one of the most acclaimed TV shows of all time, Breaking Bad actor Laura Fraser’s new role couldn’t be more different. She tells Michael Pickard why she’s heading to Neverland this Christmas.

This Christmas, one of the centrepieces of UK broadcaster ITV’s drama line-up is a spellbinding new take on JM Barrie’s classic children’s story Peter Pan.

Peter & Wendy, which airs on December 26, opens in London’s Great Ormond Street Hospital for Children, where a young girl called Lucy is awaiting treatment for a serious heart condition.

The day before her operation, she reads Peter Pan to a group of sick children in the hospital – and when she falls asleep that night, the story is brought to life in her dreams as the doctors and nurses who look after her become characters from Neverland.

Stanley Tucci’s kind-hearted surgeon becomes the wicked Captain Hook and Laura Fraser doubles up as both Lucy’s mother Julie Rose and Mrs Darling. Hazel Doupe plays Lucy and takes the part of Wendy in her dream, while a group of junior doctors become pirates and other children at the hospital appear as the Lost Boys.

Other cast members include Zak Cutliffe as the eponymous Peter Pan, while singer Paloma Faith earns her wings as Tinker Bell.

The one-off family film, which sees the action split between the hospital and Neverland, is produced by Headline Pictures’ Christian Baute and Stewart Mackinnon in partnership with Catalyst Global Media. It is written by Adrian Hodges (The Musketeers), directed by Diarmuid Lawrence and distributed worldwide by Red Arrow International.

Peter Pan is indelibly linked to Great Ormond Street after Barrie gave the hospital the rights to the story in 1929 along with all royalties from any performance or publication of his work. The story itself stems from the death of Barrie’s elder brother David who was killed at 14 years old in a skating accident. His mother would say that David would forever be a child, sowing the seed for the tale of Peter Pan.

It was the connection between Barrie and Great Ormond Street that Hodges focused on when asked to adapt the story for television, allowing him to tell it in a fresh way while ensuring the original themes of childhood, adventure, innocence, motherhood and death were preserved.

And it was the theme of motherhood that struck a chord with Fraser, who has a daughter of her own. She was filming forthcoming movie I Am Not a Serial Killer in Minnesota last winter when she was offered a role in Peter & Wendy and flew straight to London for filming.

“It’s an interesting way of telling a story everybody knows,” she says of Hodges’ take on Peter Pan. “I was also drawn to the fact that this mother’s struggling to deal with her daughter’s illness and trying to be brave and strong and not quite managing, and the fact she’s a single mother made it a wee bit more interesting. Stanley Tucci being attached was also appealing to me. It just looked like a fun thing to do.”

The hospital is so engrained in the story that the cast and crew actually spent several days there earlier this summer filming external shots and scenes in and around the reception area, which proved difficult and emotionally stirring for many.

“It was quite hard to film there, it was quite moving,” Fraser admits. “We did have to stop for a few minutes four or five times during the day because even though it was a quiet day in the hospital – it was chosen specifically for a day when there weren’t too many operations in the ward we were in – you’d see parents coming in with their sick children, some in wheelchairs, some couldn’t walk, some were lying down. It was just gut-wrenching. Some of the crew were crying. It just makes you really grateful for your kids being healthy.

“As a mother I’ve had these worries and fears constantly niggling at me, like most parents. I just indulged them and exaggerated them and allowed myself to feel them. I would also listen to really morbid audiobooks to keep me in that state of mind where you think death is so close. I was relieved when it was over, in some ways.

“I did have fun and there was a lot of laughing as well. When the pirates are on set, they’re just hilarious people, I loved them. I was supposed to be upset in one of the scenes I have with them when they’re playing the junior doctors, and I was just corpsing all over the place. I couldn’t hold it together at all.”

Scotland-born Fraser, who has recently moved back to Glasgow, also enjoyed the opportunity to play dual roles – a technique that keeps the cast list down despite the vast array of colourful characters in both the real world and Neverland.

“It’s a very old tradition of actors playing dual roles,” she explains. “I’ve met a few people who have been in the Royal Shakespeare Company and they’ve played several different parts at the same time and I just couldn’t understand how they do it. But then your brain is capable of much more than you think. It wasn’t particularly taxing for me – I only had a few lines as Mrs Darling. It would have been a wee bit worrying if I couldn’t handle that. It was fun – it was a nice introduction to playing dual roles, although I don’t think I’ll be doing two Shakespeare plays simultaneously any time soon!”

Having starred in the final two seasons of US hit drama Breaking Bad, Fraser notes the growing trend for darker, edgier television drama, which is why family friendly Peter & Wendy appealed to the actor, who also appeared in ABC drama Black Box.

“My husband and I are really inappropriate about what we let our kid watch! She’s seen The Hunger Games – she’s nine,” the actress admits. “That aside, I don’t think it’s good to show violent images to children, so it is nice to have something you can all watch together. My daughter is interested in seeing stuff that I’m in but there hasn’t been much that I can show her, legally. So it will be nice to watch it together.”

Having worked across TV and film – her movie credits include Vanilla Sky, A Knight’s Tale and Kevin & Perry Go Large – Fraser is now taking advantage of the increasing quality of television drama, most notably as Breaking Bad’s Lydia Rodarte-Quayle, who supplied drug ingredients to both Gustavo Fring and Walter White.

“I love doing both TV and film and I find them very similar,” she says. “The quality of TV is going through a really good patch. I’ve been really enjoying the TV scripts for the last couple of years. They’ve been so much better. It must be nice as a writer to take your time to tell a story and not feel rushed. And also to be working for a length of time – that security is nice. To have character like Lydia, which was so well written, it would have been a shame to only have that in a one-off feature-length drama.”

Joining Breaking Bad in season five, Fraser looks back fondly on her time on the AMC hit but remembers being incredibly nervous at the prospect of joining Vince Gilligan, Bryan Cranston, Aaron Paul et al.

“I was living in upstate New York at the time so what I remember most is getting to Albuquerque (in New Mexico, where Breaking Bad was shot) and back, because I would commute during filming,” she recalls. “I also remember seeing Albuquerque in winter and summer. Even though it was only one season, it was shot over two years. Albuquerque was just so foreign, with huge skies. Every day the sunset would blow your mind.

“There was a surreal aspect to being part of something so well known. I still go, ‘What was I doing there?’ I feel really lucky that I got to be part of something like that. During filming, I was quite intimidated and a wee bit scared. I felt like I couldn’t breathe properly a lot of the time. It was almost like a very mild, sustained panic-attack shoot. But in retrospect I loved it.”

Fraser will soon be appearing in fellow ITV drama Houdini & Doyle, executive produced by David Shore (House) and airing on ITV Encore, Global in Canada and Fox in the US in 2016. It stars Stephen Mangan as Sir Arthur Conan Doyle and Michael Weston as Harry Houdini, who together solve crimes in this supernatural series.

She will also be on screen in BBC1’s One of Us, in which she plays a detective solving a horrific double murder involving two close-knit families. It is written by Harry and Jack Williams, who previously penned The Missing, and will air sometime in 2016.

“I was worried I was only going to be able to play total bitches after Breaking Bad but it’s actually been really varied,” Fraser adds. “In Houdini & Doyle I play a prominent suffragette who gets embroiled in a murky murder case, and in One of Us I play a detective solving a grisly double murder. So lots of murder! I actually enjoyed playing a detective, it was fun.”