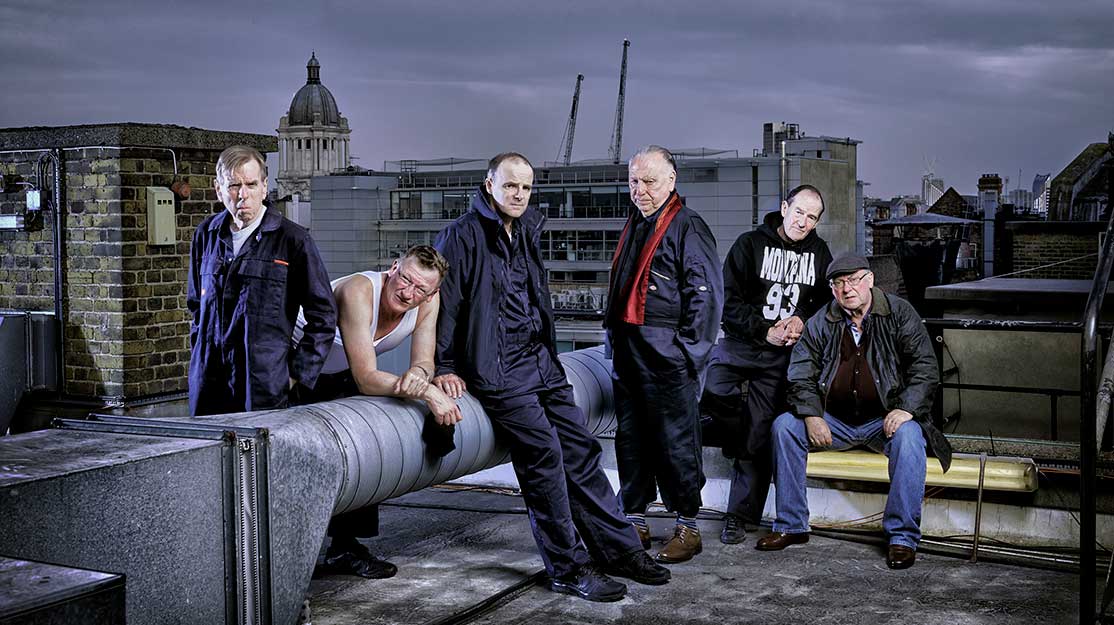 A real-life multimillion-pound heist was the inspiration for Hatton Garden, a new ITV miniseries about the elderly gang behind the ‘crime of the decade.’ DQ goes on set to meet the cast and producer.

Two well-mannered, smartly dressed elderly gentlemen are being shown around the notoriously impregnable vault at Hatton Garden Safe Deposit in central London. These would-be clients are very courteous and are wearing suits so sharp you could cut your finger on them – but appearances can be deceptive.

These well-groomed and seemingly sophisticated pensioners are in fact Brian Reader and Terry Perkins, a pair of ruthless career criminals. They are in the vault to scope it out in preparation for what would become known as the ‘crime of the decade.’

The Hatton Garden robbery, an audacious heist in which a band of superannuated crooks stole jewellery and cash valued at an estimated £200m (US$267m), caught the public imagination in April 2015.

Over the Easter bank holiday weekend, the gang of criminals led by Reader drilled through the 50cm-thick wall of the vault and made off with the swag. It is thought to be the largest burglary in English legal history.

However, the crooks were unable to resist blabbing about their blag and they were soon arrested and convicted. Despite the fact that they had committed such a terrible crime, the pensionable age of the felons continued to fascinate people. The press even called them ‘Diamond Wheezers.’

As such, it’s no surprise that this inherently dramatic robbery has attracted a lot of interest from filmmakers. It has already inspired four movies: Hatton Garden the Heist!, One Last Heist, The Hatton Garden Job and Night in Hatton Garden.

Now the theft is being given its first TV dramatisation in the form of ITV’s Hatton Garden. This engrossing four-part series is co-written and co-executive produced by Jeff Pope (Little Boy Blue, Cilla) and Terry Windsor (Hot Money, Essex Boys). Made by ITV production arm ITV Studios with Jonathan Levi from Renegade Pictures acting as a consultant, it is directed by Paul Whittington (The Moorside, Mrs Biggs).

On the set of Hatton Garden, the aforementioned dapper gents, 76-year-old Reader and 67-year-old Perkins, are played by the compelling duo of Kenneth Cranham (Shine On, Harvey Moon) and Timothy Spall (Auf Wiedesehen Pet), respectively.

Meanwhile, the vault – complete with 50cm-thick walls, ready for drilling by the cast – has been meticulously recreated at West London Film Studios in Hayes.

O’Byrne, who has also appeared in Prime Suspect USA, Mildred Pierce and FlashForward, emphasises how the Hatton Garden robbery struck a populist chord on both sides of the Atlantic.

The actor recalls driving around LA, where he lived until just recently, outlining the premise of the drama to his family. “I started telling my wife about it. I said, ‘There was this huge heist in London. They thought it was going to be this crack team assembled from around the world, and it turned out it was all these old guys.’

“And from the back of the car, my nine-year-old daughter goes, ‘Oh, it’s the granddad robbery!’ I couldn’t believe it. I thought, ‘Wow! Obviously, there’s something about it that captures people’s imaginations.’”

The production team would dearly like to have filmed in the real vault, but Imogen Cooper, the producer of Hatton Garden, explains why that was just not possible. “We’ve recreated all of it here [at the studio]. We will film in Hatton Garden, on the street. We will also use the actual corridor that comes out onto Gregory Street, where the gang’s van arrives and where Basil gets into the main building and lets them in through the side entrance. We would have loved to do more, but unfortunately they’ve now got works in the building, so we can’t access any more.”

The other reason the show could not be filmed at the actual location is that the section of the wall that was drilled is going to be exhibited in a museum – yet more evidence of the way this crime has grabbed attention.

However, Cooper continues, the cast and crew were able to go on several very useful recces at the original building. The producer, also responsible for Quacks, Yonderland and Horrible Histories, says these visits were very productive.

On one such trip, Hayman was even able to emulate what the slender Jones did during the actual robbery. “David did delight in slipping through the hole they had drilled when we were in Hatton Garden!” Cooper notes.

The drama also depicts the sheer hard slog that the crime entails. Spall reflects: “It’s about real graft. What you’re seeing are men getting tired doing physical labour. So if you turn the sound off and you just watch it, you think, ‘These are just poor geezers, a load of old construction workers, who are having to work in their 60s, down a hole in a vault.’

“These blokes are old and knackered, you know. So that is a big part of what you’re seeing in this process. And that side of it, I think, makes us intrigued. It’s old-fashioned, isn’t it? That’s the human quality of it because it’s not about pressing a button and just taking 10 billion quid off someone. It’s an analogue crime in the digital age.”

For all that, the producers are quick to point out that Hatton Garden, which begins on ITV on December 11, makes no attempt to glamorise the criminals. Viewers will be left in no doubt about the catastrophic effect of their robbery on the people who owned boxes in the vault.

Pope says it was vital to stress that this crime was in no sense “victimless,” adding: “The research threw up some fascinating detail and blew away many of the misconceptions about this story,” he explains. “It was not about a bunch of ‘loveable old blokes.’ Many box holders lost everything in the raid, and we reflect that.”

So, having played a robber for several weeks, does Spall think he could have made a successful criminal in another life? “Unlikely,” deadpans the actor. What criminal attributes is he lacking, then? A pause. “All of them.”