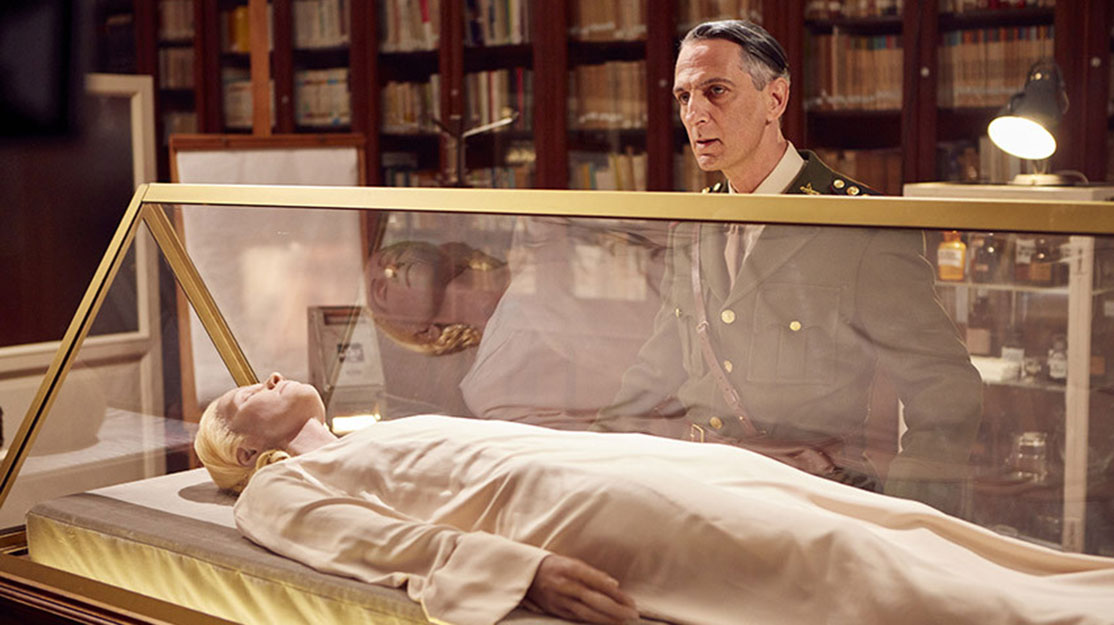 Based on the book of the same name by Tomás Eloy Martínez, Argentinian drama Santa Evita tells the incredible story of what happened to Eva Perón’s body after her death.

The iconic First Lady of Argentina, often referred to by the nickname Evita, had become a powerful political figure in life as the wife of General Juan Domingo Perón. Then after her death in 1952, her body was embalmed and left awaiting burial while a grand mausoleum was constructed.

However, the building never materialised and in 1955, Argentina’s military forces overthrew the president and hid Evita’s body for 16 years to prevent it becoming a symbol of resistance against the new regime.

Filmed in more than 40 locations in Buenos Aires, Santa Evita tells the story of not just what happened to Evita’s body, but also, via flashbacks, her life from childhood to her death in 1952. The seven-part series features more than 120 actors and 1,300 extras, while the meticulous reconstruction of various periods of history involved more than 150 pieces of clothing designed especially for the series.

Launching on Star+ in Latin America, Hulu in the US and Disney+ worldwide on July 26 – the 70th anniversary of Eva’s death – Santa Evita had a premiere screening at French television festival Série Series last month. There, DQ spoke to Oreiro and screenwriters Marcela Guerty and Pamela Rementería about the enduring legacy of Eva Perón, playing the real-life figure and writing a series spanning multiple timelines.

Natalia, how did you join the project?
Oreiro: This was the second time I had a chance to play Eva Perón. This time, I felt prepared – before, I didn’t feel like I had the skills to play a character like her. After more than 30 years of experience in my career, it is quite unusual to get a role through casting, but it was important to go through that process because it meant I could show I was ready and trust the directors had seen something in me that was suitable for the character.

Although I’m from Uruguay, I have been living in Argentina for many years and I chose to do the audition on a date that is very important for Perón and his followers – October 17, Día de la Lealtad [Loyalty Day], when there was a big protest in 1945 in Buenos Aires for people asking for Perón to return [after being jailed]. It’s a very Perónista day – it was meant to be. But when they told me I had been chosen for the role, I got scared.

How did you prepare to play such a popular figure?
Oreiro: In Argentina, she’s a legend, not only in politics but also socially. She did a lot of social work, giving rights to workers who were not acknowledged before. She made it possible for women to vote. Today, she is still very popular. There are monuments to her in the streets and she’s very present. She’s remembered both by people who loved her and people who hated her. She divides the waters.

I feel grateful for having the chance to play this role. As a woman, particularly in this particular moment of change, I’m very grateful to play her because of her strength and courage. At the same time, I feel a great sense of responsibility as an actress because I have to play a woman who is such a legend and such an icon without being fearful.

My approach when I have to play a real person is that it’s not an imitation, it’s an interpretation. I like to prepare widely and deeply, investigating different material, video, photos and stories of the character I’m going to play. I also used my voice – I worked with a voice coach because Eva Perón was a radio theatre actress and had a high voice. Then when she became a politician, she began to give speeches, six or seven a day, so she was tired. Her illness [the cancer that led to her death] also meant she was losing her voice. The way her voice changes was something I worked on.

What was your experience like making the series and moving between two different timelines?
Oreiro: When I was offered the audition, I hadn’t read the book. I read the synopsis of the show and asked if they were calling me to play dead, because the series tells what happens to Eva Perón’s corpse. Then I got deeper into the story, which has a lot of flashbacks that tell the story of Eva from her childhood and then being an adult, her life as an actress and the hate she generates in society, from people who think it’s not right that an actress is dating a general. She’s seen as a prostitute and then she starts to create fear among Perón’s entourage until her death, which becomes a historic event that has never been seen before.

Character tools are essential to be able to play her. I had different clothing, I had to wear contact lenses because Eva had dark eyes, and also I have dark hair and she later had blonde hair. They were all tools I could use. In addition, I lost 20lbs for the role – not because I had to, but I had to show her somehow when she was sick.

When I was playing dead, I tried to separate the woman from the actress. I was not happy playing dead, but it’s a role. I worked a lot on breathing, treating it like continuous meditation. At the same time, I was thinking of all the violations the body of this woman suffered. I felt pity for her.

As well as Santa Evita, you feature in Prime Video’s Iosi, el espía arrepentido (Yosi, The Regretful Spy). How can Argentinian stories like these appeal to worldwide audiences?
Oreiro: It’s very positive to be able to tell local stories that are globally relevant. The fact they are local is what makes them globally relevant. If you did it the other way around, it would not be interesting for the world to see.

Marcela and Pamela, how did you join the team behind Santa Evita?
Guerty and Rementería: The story is based on a novel. Disney contacted us to adapt it after one of the directors wanted women to write the script. On one side, you have the novel, parts of which are fiction, while on the other side we based our writing on facts. We had to navigate between the different elements. There was great creativity writing a series based on a novel but with historical facts as well and with a very dramatic character, Eva, and of course the entire political context around it.

Why is a female perspective particularly important to this story?
Guerty and Rementería: It’s the story of a woman’s body that was manipulated by men. We needed to have women tell the story of Eva because it’s the story of a woman and the perception and point of view of a woman telling this story is different than if you have a man telling that same story. The author of the novel is a man, he tells that story, it’s his perception. As women, when we write, we can write more of the feelings and of the history through the eyes of Eva.

You have been writing partners for several years. How do you work together?
Guerty and Rementería: First, we are friends. We met on the stage – we are both actresses. Twelve years ago, we started writing together on a lot of different projects. The first one was also about Eva Perón, Mi mensaje [an episode of Lo que el tiempo nos dejó, an anthology series about key events in Argentinian history during the 20th century].

We have a lot of fun writing together and, over the years, we have changed the way we like to work. At first, we were together all the time. But as we have a very good connection, we don’t need a lot of time together now because we really understand each other. There were no obstacles in building the script together; the creative process just flows.

Did you follow the book or put it to one side as you wrote the scripts?
Guerty and Rementería: Both – we interpreted it. Every line of the book is great and the story of the body is like in the book, because what’s there is great. But for the story of Eva’s life, the book has things that are not audiovisual; they are more narrative. So we had to translate this into action and build a story that isn’t in the book.

What challenges did you face writing a series with two timelines?
Guerty and Rementería: It’s a complex process – the challenge is a constant one. Eva is a complicated character and the novel is very complicated. We had to choose which elements to pick, and some of them didn’t work out so we had to make changes. It’s three stories mixed together at the same time – the body, the investigation and the love story.

Santa Evita will be available worldwide on Disney+. Did you think of international audiences when you were writing it?
Guerty and Rementería: It is international; Eva is an international person. What happened to her body was really terrifying. Not having a burial place for somebody who is religious is unthinkable. What they did to her body is they manipulated it. It was manipulated by a whole lot of men who wanted to decide what to do with her body – the body of a powerful woman. This really happened and we hope it won’t happen again.