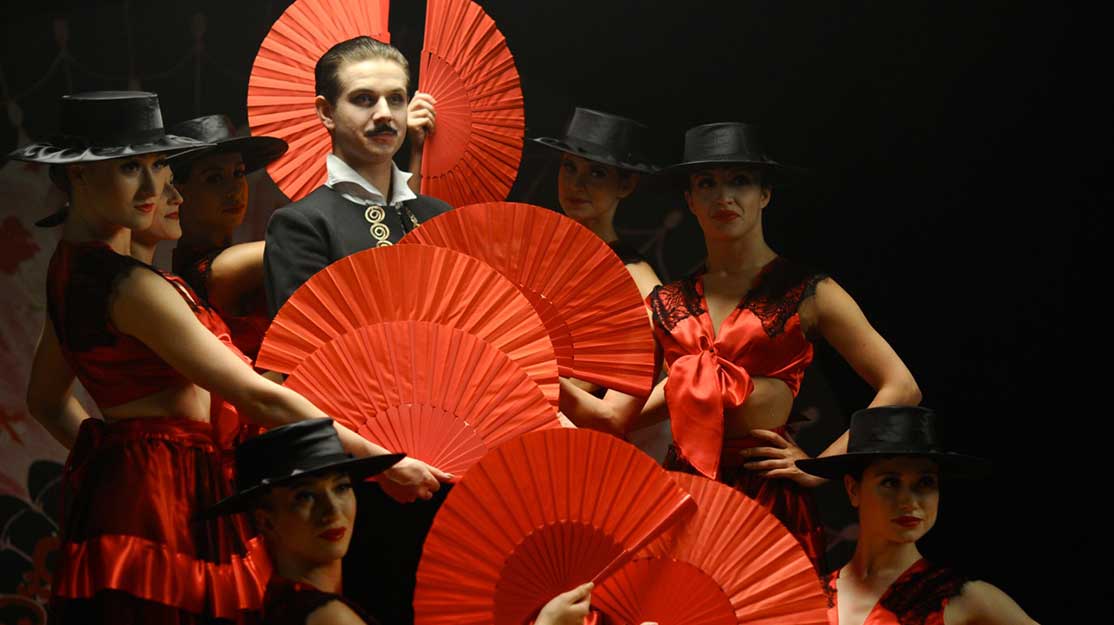 One of the most expensive dramas ever produced in Poland chronicles the life of celebrated entertainer Eugene Bodo. DQ finds out more about the ‘Polish Rudolph Valentino.’

He was a star of stage and screen who captivated Polish audiences during the years between the First and Second World Wars.

Now, 73 years after his death, modern audiences are being introduced to Eugene Bodo through a new 13-part drama airing on Poland’s public broadcaster TVP.

The series, called Bodo, follows the showman from his birth in 1899, through his childhood, when his stage career started at his father’s theatre, and throughout his fascinating adult life.

He went on to become an actor, director, producer, businessman and celebrity – a star of scandal and gossip, loved by women and idolised by men.

The show looks at the Bodo’s intense social life, the twists and turns in his life coloured by love and betrayal, and his death in 1943 – an event that is still shrouded in mystery following his move east to the Soviet Union at the outbreak of the Second World War.

“It’s a very powerful story,” says Jan Pawlicki, director of TVP1. “Bodo was a great star of cabaret and cinema. He’s a little bit forgotten and now he’s come back. We have many sad stories about war and bad things, but this story is about cinema, music – it’s a very nice story.

“In Poland, the inter-war period is some kind of Arcadia because we have only 20 years of independence between the First and Second World Wars. Bodo is a symbol of success for us during this period.”

In what is the most expensive production to air on Polish television in years, Bodo recreates the 1920s and 1930s with extensive costumes and sets, while showcasing some of the performer’s own songs alongside original music. “It cost ZL1.2m (US$250,000) per episode,” Pawlicki reveals. “It’s a little cheap for the world but for our TV market it was very expensive.

“The big part of the production was costumes and cinematography to recreate the 1920s. Polish cities were quite destroyed at the time so we had to rebuild some places to shoot the story. It was very exciting to watch how the producers and creators brought this to life.”

The exec says biggest challenge was casting the lead, with two actors eventually being selected to play the entertainer at different stages of his life.

Pawlicki explains: “We had to find a good actor to fill the role of Bodo. They learned to sing and dance. It was a long process. There were no effects – they did it all themselves.

“The story begins when he was nobody. He wanted to sing and act in the theatre but he realised that, in the theatre, the impact was not the same as in cinema, where you are immortal. He was a pioneer.”

The series is written by Doman Nowakowski and Piotr Derewenda and directed by Michał Kwieciński and Michał Rosa. It is produced by Akson Studio and distributed by TVP.

“Bodo is not so famous outside Poland but he’s like (legendary silent-film actor) Rudolph Valentino,” says Iwona Bocian-Zaciewska, head of marketing for TVP. “He was a singer, actor, director and scriptwriter – he was a really talented person but, of course, he had problems with his life. There are many interesting plots here.

“Polish people love costume series. Different people will find different things interesting in the series. For older viewers, it is Bodo. My mum remembered Bodo as a star; my grandmother even met him, so there are a lot of people who know his life pretty well. For younger people, we don’t know exactly his story but it’s fascinating to learn about his life.”

The first episode, which aired in March, drew more than 3.8 million viewers and a 20% audience share.

“We’re changing the way we watch television but it’s still a very good audience,” Bocian-Zaciewska adds. “We are very proud of this series and I’m sure there is a big interest around the world in it too.”

Having only taken up his role in charge of TVP1 at the beginning of the year, Pawlicki is now focused on using drama to build TVP1, with aspirations to turn the broadcaster into a creative hub where writers, showrunners, producers and other creatives can develop projects together.

The channel has also partnered with Bodo producer Akson Studio for Girls of War, which follows three girls during the German occupation of Poland. Shooting will begin this autumn.

There are also plans to develop a transmedia project involving a scripted drama for TVP1 with a spin-off radio series.

“The revolution is starting now,” Pawlicki says of the Polish drama market. “Like in Germany, Denmark and Israel, we’re starting to create formats with global potential. Bodo is the first.”