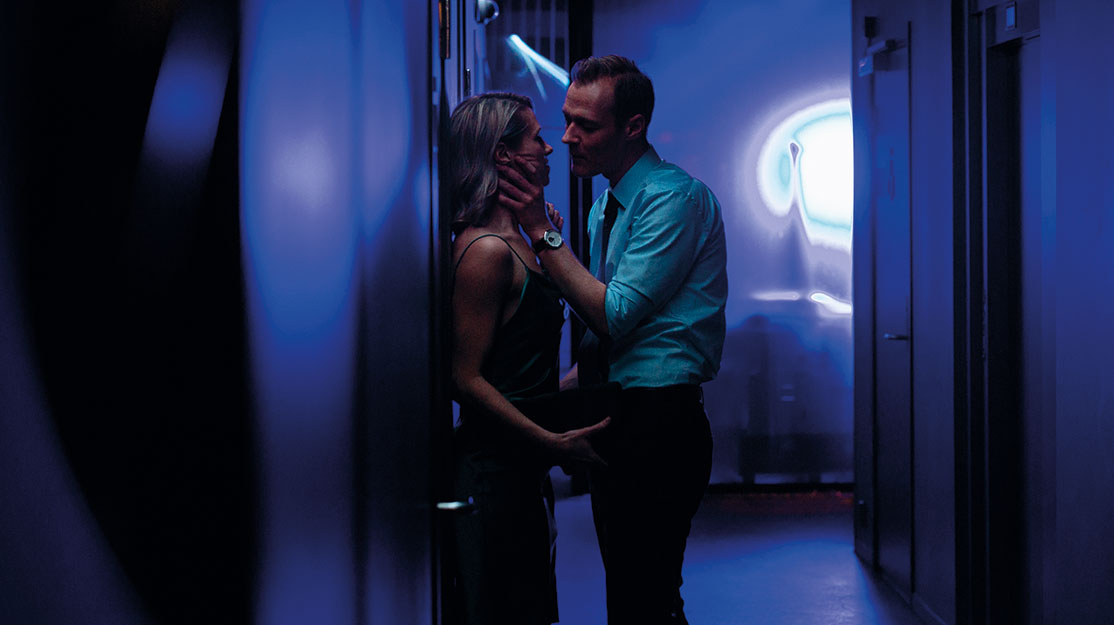 By highlighting the personal story of a whistleblower, Norwegian drama Heksejakt (Witch Hunt) looks at how those fighting for justice often become targets themselves. DQ speaks to co-showrunners Siv Rajendram and Anna Bache-Wiig and star Ingrid Bolsø Berdal about the series.

With credits including Frikjent (Acquitted), about a man cleared of murder, and movie Utøya: July 22, in which a girl fights for survival during a terrorist attack, Norwegian writers Siv Rajendram and Anna Bache-Wiig have a notable penchant for stories founded in social realism.

That theme continues in Heksejakt (Witch Hunt), an eight-part drama that shifts the spotlight to whistleblowing and the psychological and political consequences of one person’s fight for justice.

Westworld star Ingrid Bolsø Berdal plays Ida Waage, head of economy at one of Norway’s leading law firms. When an invoice lands on Ida’s desk, her decision to take her suspicions of money laundering to the top of the company lead to major consequences.

The show is inspired by the true stories of Norwegian whistleblowers about a system that regularly let down those it was supposed to protect, invoking feelings of fear, anger and loneliness.

Though development began before the dawn of #MeToo, the story has also been shaped by this and has had to evolve to stay ahead of real-life political and social repercussions. “It felt like reality was breathing down our necks all the time because we wrote this story about whistleblowing and, in the wake of #MeToo in Norway, the political scandals that followed were so spectacular, whatever we could come up with in the writers’ room, reality was better,” Bache-Wiig says.

Rajendram continues: “We did a lot of research for this show – whistleblower cases, corruption scandals. We have made it a point to be very accurate. Acquitted was a different kind of story – we didn’t have to do so much research – and it’s been really important it feels real. When we were doing the research, we were so shocked and angered by what we learned. We wanted to convey the same kind feelings to the viewers. To do that, we felt the need to be very realistic.”

The writers took their initial inspiration from the case of former company director Kari Breirem, who refused to sign a payment to a politician and was subsequently fired. She later wrote a book about her experiences and it was this that led Rajendram and Bache-Wiig to want to follow the story through the experience of the whistleblower, rather than the scope of the scandal that had been revealed.

They were also influenced by the main character in Henrik Ibsen’s 1882 play An Enemy of the People (En folkefiende), Doctor Thomas Stockmann, who is also a whistleblower and gave rise to the adage ‘The strongest man in the world is he who stands most alone.’

Then when they talked to other whistleblowers, they discovered their experiences were extraordinarily similar, despite coming from different sectors of society. “It’s all about speaking up against power, stepping out from the group and standing alone,” Bache-Wiig explains.

“The psychological pressure you’re under – it’s like being back in the schoolyard, being the one that speaks up and being questioned and doubting whether you’re right or not. It’s really about how other people see you. It’s a psychological experience that caught our interest and the injustice in how this affects our existence.”

From initial exclusion to harassment and even losing their job, whistleblowers each spoke about the same repercussions that came from their actions. “It’s a pattern and it occurs again and again in different types of cases,” Rajendram says. “We were really angered by the injustice in these cases and it’s kind of frightening. When someone blows the whistle, more often than not it’s against power and, seeing what happens to people who do that, you can really understand it’s much easier just to go along [and say nothing].

“That’s part of the fascination and the origins of the idea. These people [whistleblowers] are special people, who speak up and don’t remain silent. That’s a very fascinating character.”

The fictional story in Witch Hunt begins when Ida has a “fishy” invoice on her desk, from which she learns people inside her company are involved in money laundering for one of the richest people in Norway. But when she acts in good faith by taking her complaints to the company board, everything turns against her as she discovers the conspiracy amounts to a national scandal.

“She’s not like a typical hero who, when she digs around, suddenly turns into a police officer,” Bache-Wiig says. “She does what any normal person would do. Eventually she calls the police and then we follow the police officer working in the corruption department. There’s also a journalist who starts to investigate. They all try to do justice, to catch the bad guys. It turns out to be a very complicated and difficult process. Eventually Ida is the only one who can speak out. Everyone else fails.”

Ida’s battle is hampered further when her employer begins a smear campaign against her, turning her into a public figure. “In these social media times, it’s a terrifying place to be,” Rajendram notes.

Best known to international audiences for her turn as Westworld’s android host and ruthless bandit Armistice, Berdal says she was delighted to return to Norway after two seasons on the HBO sci-fi drama.

“This story was really a gift,” she says of Witch Hunt, which is produced by Miso Film and distributed by Fremantle. “It was a tremendous opportunity to delve and dig into a character and situations. For an actor that is both fantastic and challenging.”

The actor admits she was “surprised and saddened” to learn about the way whistleblowers have been treated in Norway but says the writers’ bravery to tell this story struck her most about the project. “These issues are burning hot because it’s a story that tells something from a personal point of view, from Ida’s character, but it also goes into corporate Norway and politics, the press and the police,” she says.

“They were really looking at this as something that is a problem for our democracy. It is easy sometimes to add on certain things to make things more sexy or even more sensational but they have always been very sober when it comes to how to tell it and why they want to tell it.”

Her preparation for the role involved her own research, taking in the script and working with concept director Eva Sørhaug (Occupied) to convey the sense of panic Ida feels when she becomes overwhelmed by the backlash to her actions – to the extent that she fears for her safety.

“But there’s no killer lurking around, there’s no action or outside physical drama. It’s just people being manipulative,” Berdal says. “These conversations were really meaningful and a big part of preparations – where is she the most scared, where is it the hardest? Pacing these things out in the duration of eight episodes is important so I’m not just playing the same thing. There must be some nuance in it all.”

Berdal also made the decision that Ida wouldn’t have been in this kind of situation before, which meant she was able to convey the full gamut of emotions her character experiences. “She’s got a big sense of justice within her but she’s not seen that side of what a person is capable of doing, which was important for having her go through this rollercoaster of ups and downs, disbelief and shock,” the actor adds.

“She trusts them. All of a sudden, they do something against her. She is a person that really wants people to be good and I think this is the first time she’s seen other sides of people for real.”

Rajendram and Bache-Wiig first began writing together when actor Bache-Wiig (Occupied, Side om Side) was partnered with an experienced writer to develop her first series. Both were initially sceptical about working with someone else, but they hit it off and have been working closely together ever since, although that initial project failed to take off.

Often writing together in different locations, they use online software to allow them to both access and edit the same document at once, with one person in charge of writing at a time and then alternating. They then hold extensive discussions with directors to push their view of the story and individual scenes, before stepping back and putting their trust in the creative team on set.

In their work, they say they don’t aim to shock viewers, though shocking things may – and do – occur. Instead, they want the audience to think about the dilemmas facing the characters and ask themselves what they would do in the same situation.

It’s finding a balance between reality and fiction that proves to be the biggest challenge facing the duo in their work, such is their desire to tell authentic stories.

“Another great challenge [in Witch Hunt] has been to find the balance between the thriller and the drama,” Rajendram says of the series, which aired on Norway’s TV2 and TV2 Sumo at the start of 2020.

“We always have a mix of genres. Maybe the greatest challenge has been to convince our producers that this story actually could be told in the way we wanted to tell it. It’s very easy with a whistleblower story to follow the action and have a big spectacular court case but we wanted to follow the psychological drama and the consequences of whistleblowing more than the case. We had huge discussions on that.”

“You need all the ingredients, it’s just a question of how you put them together,” Bache-Wiig continues. “That’s always the challenge but in this case, it was maybe more challenging. This whistleblower story is almost a genre on its own. We’ve seen so many stories about whistleblowers including the police, politicians, corruption and newspapers. We had to find a way to put it together that we hadn’t seen before.”

Because of their decision to see events unfold through the eyes of Ida, Witch Hunt stands out by offering a new perspective on a familiar story. It’s also a reflection of a new approach by Norwegian drama more generally, with Bache-Wiig revealing that the country’s television creatives are growing more confident on the back of international successes such as Skam, Lykkeland (State of Happiness), Occupied, Lilyhammer, Nobel, Kampen om tungtvannet (The Saboteurs), Valkyrien and Heimebane (Home Ground).

“The shows we’ve seen from Norway have been braver than before,” she adds. “Ten years ago, we started to get something right with the Scandinavian noir wave and these very silent crime stories that we were also a part of. With success comes confidence and hopefully we can use that confidence to be braver and more interesting in the future to create new stuff.”

Norwegian star Ingrid Bolsø Berdal isn’t the only European actor to visit HBO’s Westworld, a Wild West-style theme park where android ‘hosts’ are programmed to fulfil the guests’ every wish. The show recently concluded its third season, in which the action left the park to unfold in a future LA.

Anthony Hopkins
The Welsh actor, Hannibal Lecter himself, is the architect of Westworld – the park’s co-founder and director, Robert Ford.

Thandie Newton
London-born Newton plays Maeve, a host who acted as the madam of Westworld’s Sweetwater town but whose apparent memories of a past life led her to become self-aware.

Vincent Cassel
Frenchman Cassel joined the series for the third season to play the villainous Serac, marking the first regular US TV series role for the Jason Bourne and Partisan star.