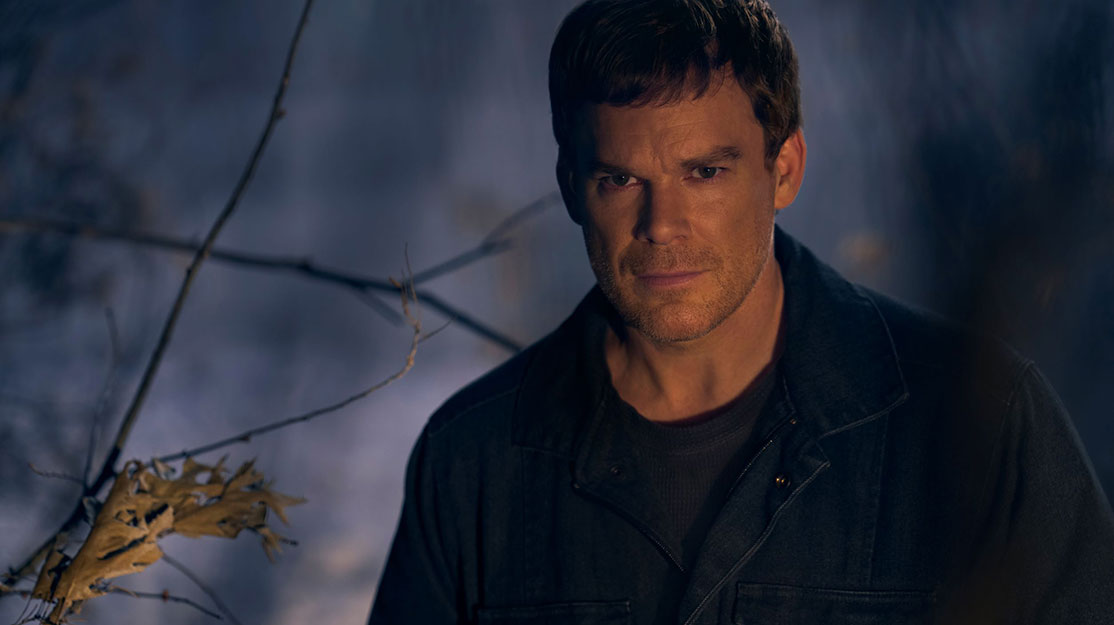 Blood in his hands

Eight years after the end of Dexter, a crime drama about “America’s favourite serial killer,” the series returns this fall with special event series Dexter: New Blood. The absence has been even longer for showrunner Clyde Phillips, who oversaw the Showtime series for the first four of its eight seasons and now reunites with star Michael C Hall to pick up the title character’s story, which swaps the sunny climes of Miami for snow-covered upstate New York.

“It’s amazing. Dexter changed my life and is changing my life again,” Phillips tells DQ ahead of his masterclass session at French television festival Series Mania, where he is also a guest of honour. “And I’m so happy to be back with my old team, to be back with Michael. We’ve just finished shooting 119 days in a row during Covid, chasing the weather. We would shoot a scene in February and then the next scene in late July, and the actors, directors and all of us had to keep in mind where we’re coming out of and what we’re going into because it was all about trying to find the snow. And when we couldn’t find it, we had to make our own.

“It was the toughest shoot that any of us has done. We shot in 50 locations under Covid restrictions. We were like a professional soccer team – we were tested every day. We were our own bubble, so we were able to stay safe.”

Launched in 2006, Dexter centres on Dexter Morgan, a forensics expert for the Miami Police Department who lives a double life as a serial killer, solving crimes by day and hunting and killing murderers and criminals who have escaped justice by night.

After eight seasons, the show wrapped when Dexter went missing during a hurricane. Dexter: New Blood picks up his story 10 years later with the killer living under an assumed name in the fictional small town of Iron Lake, New York. While Dexter is embracing his new life, unexpected events in the close-knit community see his ‘Dark Passenger’ – the personification of his need to kill – emerge again.

“Dexter – famously called America’s favourite serial killer – was born in blood,” explains Phillips, whose other credits include Nurse Jackie and Feed the Beast, a remake of Danish drama Bankerot. “When he was a young baby, he watched his mother get murdered and he suffers from inherited trauma. He was rescued by a police officer who adopted him and realised that because of this inherited trauma, Dexter could never be normal. He taught him to use the inevitable ‘Dark Passenger’ that haunted him, his demons, for good, meaning he kills bad people. He’s a serial killer. We don’t condone that by any means, but it makes for good drama.

“It ran for eight seasons and, at the end of the eighth season, he was lost in a hurricane. At the very end, we see that he survived the hurricane and ended up – controversially I must say – in a logging camp in Oregon. When we meet him [in Dexter: New Blood], he is living a very calm and abstinent monastic life in upstate New York in a fictional town called Iron Lake.

“He works at the fish and game store, surrounded by weapons of minor destruction and by the trophies of what other people have killed – deer heads and stuffed trout on the wall. We also learn he’s got a new girlfriend who is the chief of police. He can use that accessibility to the police station to his advantage, because even though he’s had a monastic, abstinent life, this is Dexter and Dexter is going to kill people.”

During its initial run, Dexter became one of the most acclaimed series on television, earning multiple Emmy nominations as well as a Peabody Award in 2008. But in the annals of television history, the show’s eighth season finale will go down as one of the most disappointing series endings. Just last month, Showtime president of entertainment Gary Levine also admitted “we didn’t do it justice in the end.”

Phillips agrees. “Well, I think the ending was unsuccessful in almost every regard,” he says, before noting that it is impossible for a TV series to be consistently excellent, particular one running to eight seasons and 96 episodes. More importantly, Phillips says the show “broke the code and the trust of the audience.”

“People were just flabbergasted and exasperated by how it ended,” he continues. “I don’t blame anybody. There are a lot of voices that come into play on something like this. However, Dexter’s also Showtime’s most popular show ever. Gary also called it the ‘jewel in the crown of Showtime,’ and I think bringing it back was inevitable.”

The show’s return was only confirmed, however, once Hall was ready to “don that skin and – no pun intended – take a stab at playing this role again,” the showrunner says. When that time came, Showtime sought out Phillips at his home in Martha’s Vineyard, an island off the coast of Massachusetts. He then flew to New York to meet Hall and pitch him the idea that would become New Blood.

“He stood up, gave me a hug and said, ‘I’m in,’” Phillips reveals. “I called Gary from the car on the way back to the airport and said, ‘Michael’s in.’ Gary said, ‘Go hire a writing staff,’ and then we were off to the races.”

In New Blood, Phillips and his writing team have sought to reestablish that bond with viewers and “honesty in storytelling.”

“Dexter came from one of the largest cities in the world, Miami, Florida, to fictional Iron Lake, population 2,760, so there’s a lot less temptation there,” he adds. “But this is Dexter and people are going to tune in to watch him be his best self, and we deliver on that.”

Hall (Six Feet Under, Safe) returns alongside a cast that includes Julia Jones, Alano Miller, Johnny Sequoyah, Jack Alcott and Clancy Brown. But as an executive producer, the star’s involvement in the series goes beyond his on-screen role. Phillips says the actor was involved in New Blood “every step of the way,” from signing off on the show’s theme – fathers and sons – and the series bible to reading and giving notes on episode outlines and draft scripts.

“Because he so knows the character, and as an actor it’s a masterclass watching him work, he will often say to me, ‘You know, Clyde, about this little section right here, how about if I don’t say it? How about if I just do it with my face,’ and he’s always right when he has that instinct,” Phillips says.

“He was a leader on the set. We had a rather large cast that we had to move around, and things changed when weather changed, but Michael was always steady as a rock and helped the younger actors. He’s just a joy to work with. He’s involved in editing and adding the music with me right now. We all do it virtually but I talk to him probably every other day and email with him several times each day.”

Of his own role, Phillips says he’s the person “who holds 250 soft-boiled egos in his hands every day,” dealing with all manner of issues facing his cast and crew. “Everything’s going on. There are 250 people working on the show and this one’s getting divorced, this one’s getting married, this one’s having a baby, this one’s father died and this one got offered a movie or whatever it is, and we have to deal with that all the time. You wake up and you say, ‘What fresh new hell will greet me today?’”

But as far as running the writers room is concerned, he is an advocate for delegation. The showrunner says he will often turn up in the morning with notes on little scraps of paper and let his staff run with the ideas he has come up with.

“We then make decisions from there,” he explains, “and say, ‘Great idea…’ – but never say ‘But…’ It’s like saying, ‘I love you, but…’ Instead I’ll say, ‘Great idea, let’s take it one step further,’ or, ‘I’ve got this image. Let’s see if we can keep this image, make it organic to the story and move forward.’ Most often we can, and sometimes we spend two days spinning in circles because I had this little piece of paper from the night before and then we realise it’s a stupid idea and we move on from it.

“But my writing staff, which is rather large, generally end up loving me! This writing staff gave me a guitar as a gift and took out an ad in the local Martha’s Vineyard paper extolling the pleasure of working with me. Local people on the island saw this and thought I was dead, that it was an obituary. I’m not dead. I’m not dead yet.”

Filmed in western Massachusetts, the opening image of New Blood shows Dexter running through the snow with a rifle, chasing something – or someone. Regardless, it could not be further from Miami and the original series.

“It’s pine trees and actual snow because that was filmed in the beginning of February,” Phillips notes. “Later on, when ‘Mr Climate Change’ came and melted all our snow prematurely, we had to create snow. But there is nothing about the show that looks like it looked before. In fact, the aspect ratio of it is like a feature. It’s like we shot a 10-hour feature.”

While he is now in talks with Showtime about future projects, Phillips will continue to work on the 10-part New Blood until the end of the year, with editing and mixing likely to extend beyond the show’s US debut on November 7.

As for what viewers can expect, Phillips says his obligation to the audience as a storyteller has changed, as viewers themselves have changed since Dexter was last on screen.

“This is not Dexter season nine,” he says. “We are acknowledging that 10 years have passed and Dexter is more mature. The storytelling has had to change but with some touchstones [from the original series], in story, in character, in guest characters and in music, that are there as breadcrumbs for the audience to feel comfortable as we make them more and more uncomfortable watching the new show.”