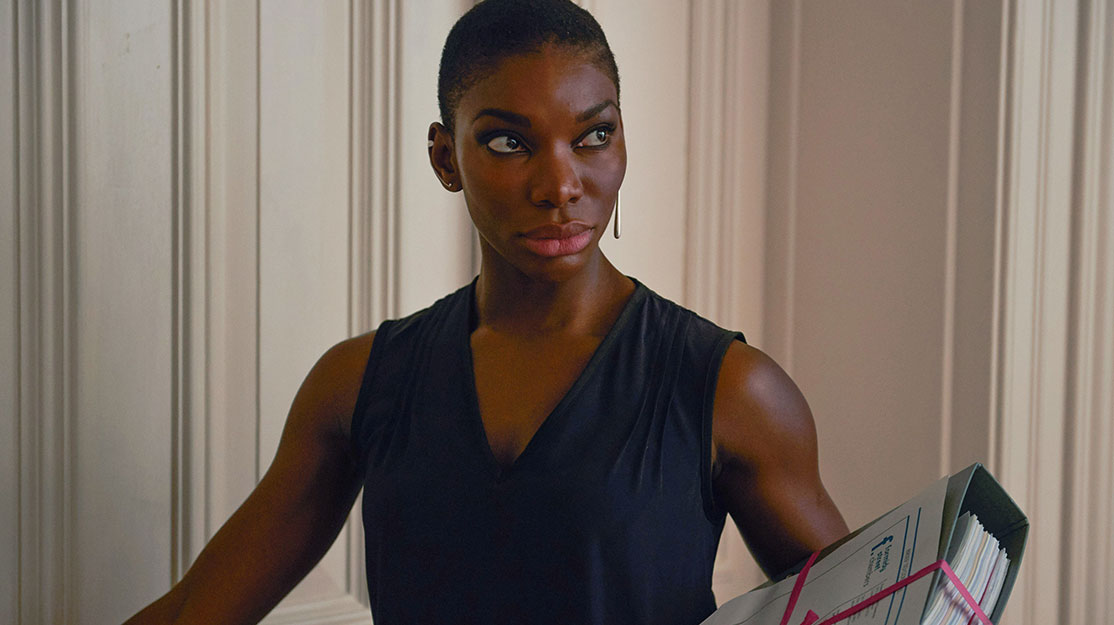 Michaela Coel stars in Black Earth Rising, Hugo Blick’s long-awaited follow-up to his award-winning drama The Honourable Woman. The actor and Blick discuss this international thriller with a unique mother-daughter relationship at its heart.

Four years have passed since the UK’s BBC2 and SundanceTV in the US first aired The Honourable Woman, the award-winning political drama starring Maggie Gyllenhaal that explored the relationship between Israel and Palestine.

During the intervening years, writer, director and producer Hugo Blick’s appetite for personal stories told within a global setting appears to have gone unabated, as he is now returning to screens with the long-awaited Black Earth Rising, an eight-part international thriller that looks at the prosecution of war crimes and the West’s relationship with contemporary Africa.

But while The Honourable Woman saw one woman struggle to right her father’s wrongs, this time it’s a mother-daughter dynamic at the centre of proceedings. Set across the UK, Europe, Africa and the US, the fictional series centres on legal investigator Kate Ashby (played by Michaela Coel, pictured above), who was rescued as a young child during the Rwandan genocide and adopted by Eve Ashby (Harriet Walter), a world-class prosecutor in international criminal law. Both work in the legal chambers of Michael Ennis (John Goodman).

When Eve takes on a new case at the International Criminal Court (ICC), prosecuting an African militia leader, the story sends Michael and Kate on a journey that will change their lives forever. The series, produced by Forgiving Earth (a partnership between Eight Rooks and Drama Republic), is once again written, produced and directed by Blick.

From the start of the first episode, Black Earth Rising is an intelligent and absorbing series, beginning with a dramatic animation of the Rwandan genocide that leads into the first scene, in which Walter’s Eve Ashby is forced to defend her role and that of the ICC. It’s an exchange that’s echoed at the end of the first hour, too, when Eve again defends her work to daughter Kate, who is angry that her mother has agreed bring a prosecution against a militia leader hailed as a hero for his involvement in bringing an end to the near-decade-long genocide.

This plot came straight from Blick’s research for the series, which followed on from similar work he had done for The Honourable Woman. Interested in trauma and its aftermath and looking at the subject of war crimes, he began studying the ICC, which was formed in 2000, after the genocide. In particular, he was surprised to discover a large number of ICC indictments for war crimes are against Africans, notably black Africans. That in turn led to the Democratic Republic of Congo (DRC), where a large number of the indictments originated.

His research found that while the ICC was seeking war crime prosecutions of people from the DRC who had participated in the Rwandan genocide (the court cannot take retrospective legal action against crimes that took place before it was ratified or before a country signs up to it), it was also chasing people who had brought the genocide to an end, again for war crimes.

“For a dramatist, this is fascinating because both villains and heroes were being pursued by the same institution and I couldn’t understand why,” Blick says. “So I was really interested to work that out and obviously draw that back down the line to what I do, which is to try to find geopolitical issues as in The Honourable Woman but personify it in the world of our lead character.

“So Michaela plays a woman who was taken out of the aftermath of the genocide, and events conspire to throw our character into our relationship with the West and Africa today. It’s a kind of platform for asking what our relationship with modern Africa is, but it’s an absolute story about one woman’s search for identity and the reconciliation with her hidden past.”

Blick, whose other credits include The Shadow Line, spent six months researching the basis of the series, says the final story was not what he set out to write. “Sometimes when you write a project of this size, you absolutely know the destination – that’s where you’re going to hit. On this occasion, I found the destination changed due to both the experience of research, writing and filming and the surprises along the way,” he says, noting that the story will be resolved in Africa, rather than by Western influences.

“It takes away this idea that we’re there to instruct what’s already an incredibly contentious issue, just on a massive political scale. They don’t need to be instructed in the way we think they do, so that’s one of the destinations of the story that surprised.”

At the heart of Black Earth Rising is the relationship between high-flying barrister Eve and her adopted daughter Kate, who is forced to confront her past across the eight-episode series.

Coel, the Bafta-winning writer and actor behind Channel 4 comedy Chewing Gum, says she was initially “perplexed” at her lack of knowledge about the Rwandan genocide. “Then as I sat down trying to find some kind of redemption for my ignorance, I tried to meet this character who had so much going on, and I was a world away from her. That’s what attracted me to it.

“Every character I play, a little bit stays with me like residue, and I think Kate is one I’m determined to keep. Her resilience, her defiance… she is the strongest person I know – I do know she’s not real – and her pursuit of the truth is unique and she should be praised and comforted for that. I think I’m a bit stronger, I think I’m a more defiant and I’m a bit more curious.”

Blick says he often casts actors with a comedic sensibility for dramatic series, describing them as “jazz players” who bring a looseness to their performances. This approach goes all the way back to comic Rob Brydon’s role in Blick’s BBC2 mockumentary Marion & Geoff, and also saw Coel and Hollywood star Goodman brought on board as central characters in Black Earth Rising.

“We had struggled to cast Kate, it’s quite a dextrous role,” Blick recalls. “Then Michaela was at the Baftas. I’d seen her in Chewing Gum so hadn’t been thinking of her much for this role. But she is a woman of agency and certainty. Some aspects of the character of Kate struck me as a total fit for the way Michaela presents herself and character.

“John brings his wonderful New Orleans-inflective voice. He’s such a professional performer. He’s playing a barrister and has a lot of words to say. But what’s very impressive about him is when you get into the edit and you’ve got eight hours to put together, he’s got a singular line of character going all the way through, right to the last scene.”

In production, Ghana doubled for both Rwanda and the DRC to give the series an authentic feel that might have been lost had it instead used somewhere like South Africa, for example. Filming also took place in Switzerland, France, Paris and the UK.

Drama Republic executive producer Greg Brenman says that with any new drama from Blick, there’s “excitement that it’s going to be unusual, different, extraordinary and challenging. It will always be super stimulating.”

It will also be very much Blick’s own vision, with his fingerprints over every part of the story. “The brilliant thing about him writing and directing is that, in order to move from writing to directing, he’s written all the scripts. From a practical point of view, it’s fantastic because you see the entire work,” Brenman says.

“He’s also one of those writers who totally understands what he’s going to do and how he’s going to write it and achieve it. He’s quite private when he’s writing a script because he also needs to find it from moment to moment for himself, while he has a complete, firm understanding of where it’s going and how it’s going to end. So he likes to present and see what everyone thinks, rather than discuss, chew it over and then do something that is a consensus piece.”

Blick agrees that, in a very crowded market, he gives his shows an individual voice. “It’s not a voice for everybody, but both the BBC and Netflix know they’re getting a distinct point of view because it’s coming from one person. It’s like a Tiffany jewel in the department store – it is what it is, no one else makes it and you may not like it, but it’s there and it helps the department store say who it is.”

A coproduction between the BBC and Netflix, Black Earth Rising will premiere on BBC2 in the UK on September 10, with the streamer offering it to its users everywhere else.

Blick ultimately believes the strength of the show – and the greatest challenge it faces – is viewers’ unfamiliarity with the story and modern Africa, adding that the series explores both the lack of engagement and responsibility when it comes to the continent but also the failings of African life and governments.

“It’s that two-way street of engagement,” he says. “This is a story that’s a thriller, it’s built to be a compulsive thriller, but it’s asking some difficult questions. And that’s what I hope the audience will engage with too.”