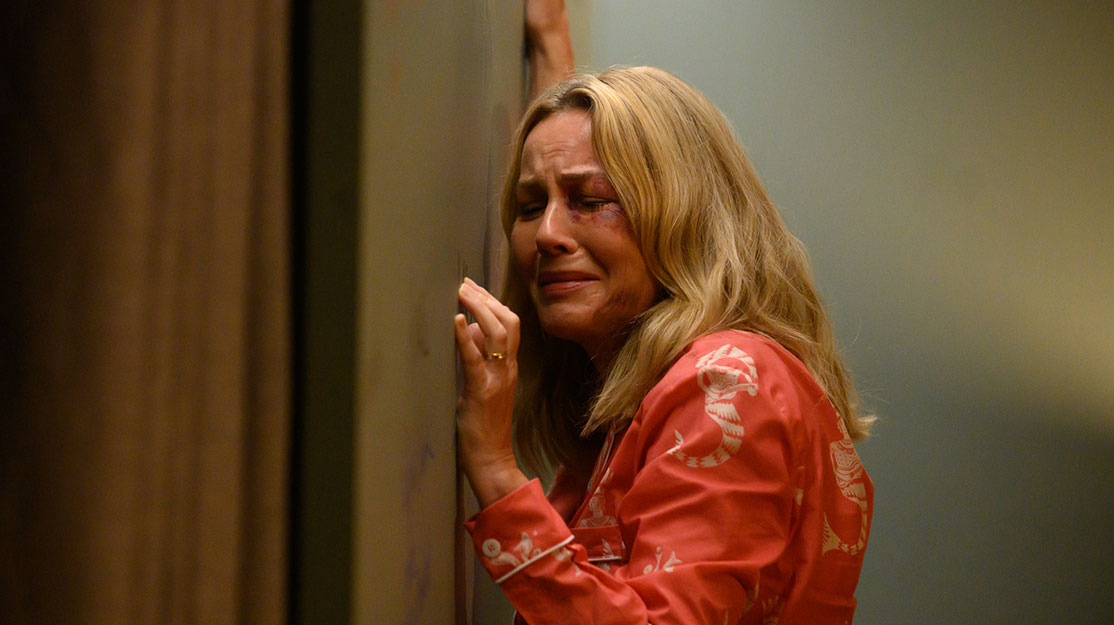 Close to Me star Connie Nielsen, writer Angela Pell and director Michael Samuels speak to DQ about making this psychological thriller about a woman’s memory loss and discuss its unique take on a coming-of-age story.

From the opening scenes of psychological thriller Close to Me, the six-part series boasts all the hallmarks of the genre, from unreliable narrators, lies and half-truths to mysterious strangers, bloody accidents and nightmarish visions. With a cast led by Connie Nielsen and Christopher Eccleston, who engage in numerous two-handed scenes brimming with emotional tension, there’s more than enough suspense and mystery to keep viewers hooked until the end.

In the show, which is based on the novel of the same name by Amanda Reynolds, we first meet Jo (Nielsen) lying bloodied and bruised at the bottom of a staircase, her injuries the result of an apparent fall that leaves her unable to remember the last year of her life.

As she struggles to piece events together, she finds her life isn’t as perfect as she imagined. Seemingly minor discoveries – husband Rob (Eccleston) is smoking again and has lost weight, she’s dyed her hair – quickly give way to bigger revelations as someone will do all they can to keep a terrible secret from her.

“I’d not seen anything about women on screen like that ever before,” Nielsen tells DQ. The Danish actor had not read the source material but found herself drawn to the story, which centres on an older woman in an unusual coming-of-age story.

“I was just beginning the menopause and I was incensed and shocked that no one had ever spoken about it [on screen] and it wasn’t part of any story, and it was very important to me to ensure there was a truth about women in Jo’s situation right then and there, and that truth stayed a part of the actual core of the story,” she says.

From the moment she returns home from hospital, Jo is playing detective, attempting to rediscover what she has forgotten, and she quickly begins to stumble upon some of the lies being fed to her, whether maliciously or otherwise.

Scenes between Jo and Rob are particularly palpable, with Jo – and viewers – unsure of her husband’s motives when he is caught in a lie. Is he trying to support her recovery, as he claims, or he is using her injury to rewrite some of their shared history? Some of those answers are revealed in episode five, which fills in the gaps for the audience – if not Jo – i terms what happened during the missing year of her life from Rob’s point of view.

“Usually the woman is the victim and then someone else has to step in and find out who is accountable and hold them accountable; here, it’s the opposite,” Nielsen explains. “You have a very true situation where a person gets a brain injury. Sometimes it goes away, and sometimes it doesn’t. All of a sudden, this person now has to use the very faculty that she’s lost to figure out who is she and what happened to her.

“That’s hugely empowering, and it’s super interesting to see a person wrestle with truth while she’s suffering from diminished capacities. It’s extremely interesting to see Jo meet these humbling moments with an enormous amount of dark humour and, at the same time, fight to get to the truth.”

The Gladiator and Wonder Woman actor was also integral behind the scenes as an executive producer. “I’m about showing a more truthful version of women, working towards creating roles that allow for a not-so-conditioned view of women, and looking at what part of women is truth and what is interesting. I find that exciting to be working on,” she says.

“The whodunit part is a naturally interesting thing. But really, this is both an existential and a psycho-drama. To see what it is that the brain does, but also what happens if you’re also being manipulated psychologically, that’s something a lot of people are very interested in.”

Produced by NENT Studios UK for Nordic streamer Viaplay and UK broadcaster Channel 4, which launched the series in the UK on Sunday (Nov 7), the series is written by Angela Pell (Snow Cake) and directed by Michael Samuels (The Windermere Children, Man in an Orange Shirt). All3Media International is the distributor.

Adapting a novel was a departure for Pell, who had been writing her own scripts until she was sent a copy of Reynolds’ novel. But keen to test herself and to see if she could “do a proper job,” she accepted the challenge of dramatising it for television. Key to her work was identifying a theme or message she wanted to communicate to the audience, and she found it in Jo’s changing behaviour as a result of her fall.

“I wanted to explore her disinhibition, partly because my background is that I have an autistic son, so he’s not able to converse as you and I am,” she says. “I’m in and around that world quite often, and that lack of ability to quite know what’s going on appropriately in social situations, I find really intriguing. I was instantly drawn to the idea of somebody with disinhibition because that’s an interesting place to be. Then, of course, I literally had just started the perimenopause around the same time, and our main character is of that age. So that’s another angle I thought would be quite interesting to explore.”

Pell found the novel to be a claustrophobic thriller that centres on just a few characters, whereas the television series needed to be more expansive to fill six commercial hours of TV.

“We just opened the whole thing out a bit more, really,” she says, noting her intention not to make the show too melodramatic or over the top. “Then when Connie came on board, we had the Danish side [of the story]. We had scripts ready to go, and then Covid happened and we had three months basically to rewrite the entire thing, which is what we did. We did a lot of rewriting in the three months [of lockdown] on Zoom every day.

Inspired by her son, Pell seeks to highlight an element of autism in all her work. In Close to Me, Jo’s best friend Cathy (Susan Lynch) has an autistic daughter, who is only seen briefly, but it was “just really important for me to put that in,” she explains. “It’s really nice to have a character that is not going to make the plot go forward and is not there for a particular reason, but they’re just there because we are. These people and families are around and you just don’t see them on TV very much.”

Samuels describes Pell as an extremely visual writer. Films such as Jacob’s Ladder and The Diving Bell & The Butterfly inspired the show’s style, while Pell’s own “dark imagination” comes through in some of Jo’s dream sequences.

“In episode two, there’s a dream with a dead dog, and all of that sort of stuff is stuff that I like,” she says, “but we had to be really careful not to go over into the horror genre, because it’s very easy to do that. What I was really keen on doing was having people feel unsettled, because that’s really what she’s feeling.”

Samuels wanted to film the series so viewers would feel like they were in Jo’s head, following events as she does. The show was shot in cinemascope, which gave him the opportunity to focus on both entire rooms and a person’s face at the same time. A blurry, dreamy look was also added to flashback sequences.

“One of the things I love doing in drama is excavating what’s going on inside someone’s head,” he says. “That’s one of the things drama can do so well. And when you have a situation, in the case of this series, where it’s a woman who’s had a brain injury and is starting to question whether what she’s flashing back to is real or imagined, that gives you licence to go further inside someone’s head than I’ve ever been able to do. That was very exciting.”

The series also uses a voiceover to reveal Jo’s inner voice, which talks to her with equal measures of disdain and pity.

“We were thinking that, just before her accident, circumstances made her become this very empowered, passionate woman on a mission, and the fall down the stairs knocked that out of her,” Pell says. “That person, she’s forgotten, so the inner voice really is that person whispering in her ear and trying to get her back on track. Voiceover can be a little bit amusing, but we were trying to pare it down and really use it as a catalyst for action.”

Rehearsals were “absolutely vital” for Samuels to discuss the characters and their relationships with the actors, chiefly so those questions were already answered by the time everyone arrived on set.

“What was absolutely brilliant about Connie and Chris is they were prepared to go all the way, and that’s what, from my point of view, makes it exhilarating,” he says. “They’re not afraid to expose themselves. A lot of these scenes have emotionally fraught performances.”

The 14-week production schedule, which wrapped in December last year, was particularly complicated owing to shooting scenes out of order, which meant the production relied on “dynamite continuity people” to keep the actors on track.

“There was really a lot of technical work because the plot is very refined. We had to bring in so many parts of Jo’s life – past and present all had to fit together,” Nielsen says. “Just the technical aspect of it was very daunting. Then there was the aspect of the actual medical research and then playing that and experiencing that in the most convincing way. Playing a disinhibited person was also a lot of fun. It was very freeing.”

“You always start anything thinking, ‘Let’s get it as chronological as possible.’ Obviously that never happens,” Samuels says. “The whole thing is shot completely out of order.” The first two weeks were spent in the coastal town of Hastings, Kent, before the production moved to Rob and Jo’s house for six weeks.

“We tried to shoot the massive showdown that happens at the end of episode six at the end, so there was an attempt to keep some sense of chronology within the house, but things are still thrown up all over the place. It was a very ambitious and demanding shoot, but in a good way.”

Matters were complicated further by the pandemic, with Close to Me being one of the first British series to start production after the first UK lockdown. “But we didn’t compromise how I would have shot this because of Covid,” Samuels says. “We were still doing sex scenes, people dancing and people fighting. It wasn’t like everyone has to stand two metres apart. It was exactly how it should have been. Covid was something that had to be managed.”

Pell hopes all the questions posed by the series will be answered by its conclusion, while the story doesn’t lend itself to an ongoing drama. “To be honest, I think it’s quite refreshing to do a miniseries that actually you don’t go, ‘Oh God, I’ve got to wait for the next series.’ I feel like sometimes I want to watch something that is just satisfying and that’s it.”

For Nielsen, the show stands out for its approach to identity, in particular female identity, and how it explores what happens when part of you is missing.

“For a woman going through the chrysalis of menopause, it’s literally your second coming of age. You have your puberty and then you have a second coming of age,” she says. “What we’re showing is a true reckoning for families, for our society and for the woman herself – and I think it’s an explosive story.”