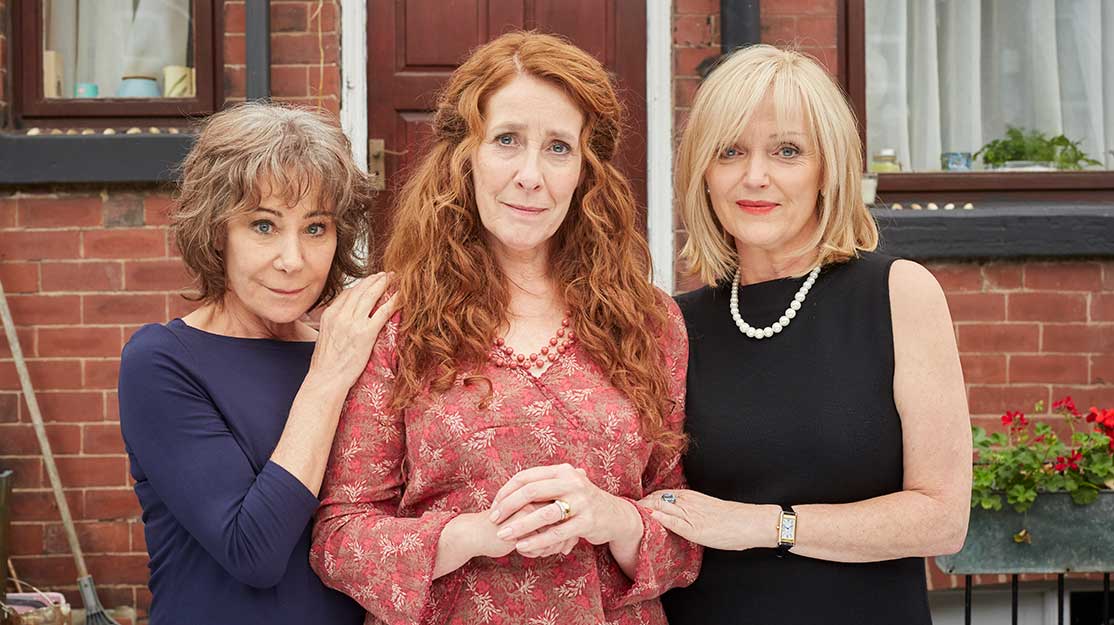 Phyllis Logan, Miranda Richardson and Zoë Wanamaker star as lifelong friends in Girlfriends, Kay Mellor’s long-time passion project about “women of a certain age.” The trio and Mellor reveal the origins of the series and discuss the changing attitudes toward older actors.

Ageism and the lack of roles for older women has long been a concern for actresses in Hollywood and around the world. Then when they do land a part on screen, they often find themselves cast as wives, mothers or grandmothers.

But a new six-part television drama from the pen of Kay Mellor is set to put “women of a certain age” front and centre. Girlfriends, which launches tonight on ITV in the UK, tells the story of friends Linda, Sue and Gail as they struggle with the responsibilities and inevitable changes that come with growing older, bound together by the same friendship they have shared throughout their lives.

“I wanted to put women centre stage,” recalls Mellor, speaking on the set of the series in Leeds, West Yorkshire in August last year. “I went to a seminar at the West Yorkshire Playhouse many years ago where a lot of women were saying they only ever play the nana or the mum and no one speaks for them. There was a need to give women a voice and women of a certain age a voice. I have written Band of Gold and Playing the Field that have put women centre stage before, but women of a certain age and looking at the complexities of their life and what they juggle. They are a sandwich generation looking after kids, kids’ kids and their mothers. We all know what that is like juggling things.”

Mellor is on a hot streak at present, having last year written Love, Lies & Records for BBC1 and executive produced Overshawdowed for digital network BBC3. She also wrote and directed a musical based on her award-winning ITV television series Fat Friends, which is now touring the UK.

ITV also embraced Girlfriends, something Mellor admits surprised her, explaining that she was gearing up for a battle to get this story of women “past their middle-50s” on air. The writer even expected the broadcaster to request the characters be aged down into their 40s, but that note never arrived.

“I really thought I was going to have fight for this one but it wasn’t that hard a fight,” says Mellor, who is also lead director on the show. “It’s been coming along at the same time as  In the Club and The Syndicate [Mellor’s BBC1 shows, debuting in 2014 and 2012 respectively]. They were always moving forward but this is my passion project. I sit and watch these guys and have a little weep and I have a little laugh. And I am thinking that if I am doing that as the director then I think, dare I say it, it’s going to be good.”

Girlfriends sits particularly close to Mellor as the characters and relationships at the heart of the story are based on her own friendships, with Linda in particular based on the woman who has been the writer’s best friend since she was three years old.

“We used to live over the road from each other, she is the most wonderful person,” Mellor explains. “I don’t think I would be the writer I am if it hadn’t been for her. She supports me in everything I do. She is a very special, lovely woman. She lightens up a room when she walks in it and she certainly lightens up my life.”

The story begins in the aftermath of the apparent death of Linda’s husband Micky, as the three friends find themselves back together and facing their own problems, from money troubles, a looming divorce and the loss of a high-powered job from age discrimination, to juggling the responsibilities of caring for their grandchildren and ageing mothers.

“It’s unusual because usually you are tagged on as someone else’s appendage, whether it’s a mother, an auntie or a wife in the background. So it’s nice to be right at the forefront of it all and the men are the add-ons, as it were,” Logan says of her part in the show. “It’s lovely to have three women as protagonists.

“It was so exciting to read it, as it’s very much women of a certain age and it’s all about them and their struggles and their highs and lows, but at the root of it is their friendship that binds them together. They come to each other’s aid, they really do.”

Looking back on a career that has spanned roles in Downton, The Good Karma Hospital, Lovejoy and Silent Witness, Logan says Girlfriends is a refreshing change from the way television dramas are usually cast.

“It was always that men get cast and their wives are 15 years younger, and that’s still there, but it’s nice in ours because it’s the other way around. There is slightly more [opportunity now] for women over 50. People have discovered that women of a certain age are quite interesting and they still have a viability, a sexuality and an attractiveness about them. Maybe people are beginning to cotton on to that – let’s hope.”

It was also a relief for Logan not to have to wear a corset or any other period costumes after six seasons playing Mrs Hughes in Downton.

“Period drama is a different thing altogether,” she says. “It has a much more leisurely pace but to a stultifying point. This is fast, and it is fantastic working with Kay. I loved the script, and when she said she was directing, I thought it was fantastic because what better person is there than the person with the vision of what she wants it to look like? It’s brilliant, it’s great fun.”

Playing the highly successful and fiercely intelligent Sue is Richardson, who was keen to work with Mellor. “She has such a fabulous record in writing for women,” the actor observes. “She is humane, so everyone is a hugely rounded character, but she likes to see everything from the women’s point of view. She’s always cooking – she has about five things on the go at the same time.”

During the series, which is produced by Rollem Productions and distributed by All3Media International, viewers will see Sue face challenges both at work and in her private life, seemingly unaware of the life-changing events looming ahead. And the fact that her story and the events and characters in the series are all mash-ups of real-life people and stories adds to the appeal for Richardson.

“They are all amalgams of people,” she says. “I thought of someone the other day who made me think of Sue. There is high drama in the way she operates with groups of people. She is always on show but all of these people have vulnerabilities and they mask their vulnerabilities but you know they are there in different ways.”

Meanwhile, Gail deals with a mother suffering from the early stages of dementia, a jailbird son who moves in with her and her husband, and a child from an old relationship. But she is able to juggle her responsibilities with the support of her friends.

“Very early on, we make relationships with people in our lives so even if you don’t see them for a long time you pick up where you left off,” says Wanamaker. “If you have that kind of connection, it really goes on. You accept them for what you had together and what you carry on in life, and that way they support each other.”

While she admits hers is a part she wouldn’t normally have done, Wanamaker says she was sold on the project after reading the first three scripts, noting that the opportunity to work with Mellor and play a role not often seen on television was too good to turn down.

“Have you seen how many women are on television now?” she adds. “The last 10 years have been incredible; the American stuff has been all women and very beautifully written and there’s more in this country too, at last. Open the doors. I think it’s a very optimistic time for women.”