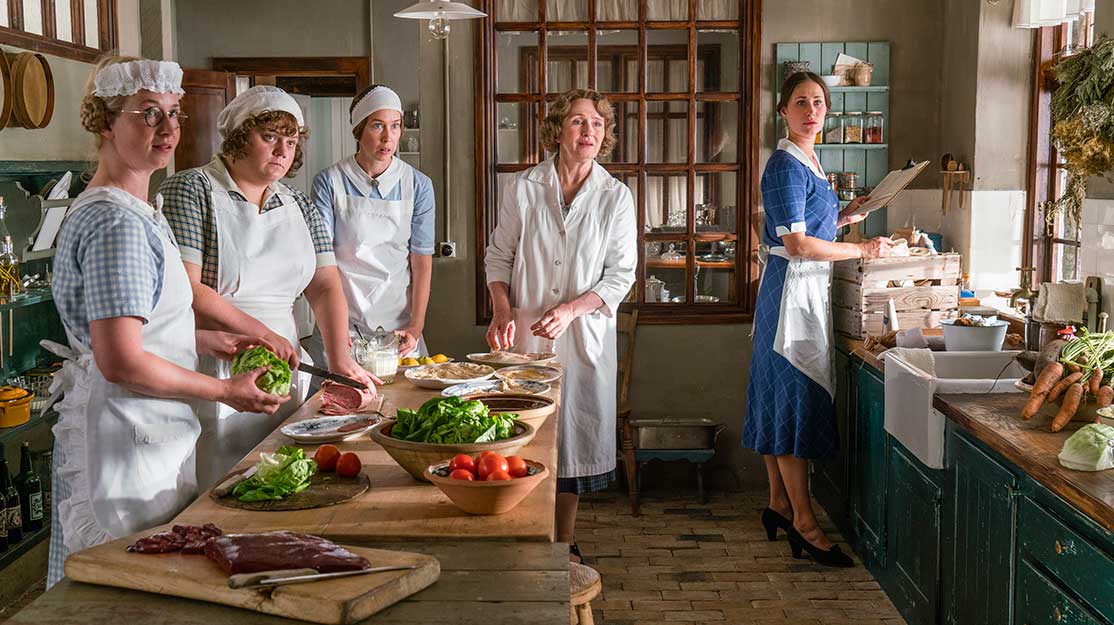 If there’s one series that can banish the bleak landscapes and murderous storylines commonly associated with Nordic noir, it could well be Danish period drama Badehotellet (Seaside Hotel).

The show, which mixes comedy and drama set against the picturesque scenery of the Jutland coast, launched in 2014 and transported viewers back to 1928 as the lives of rich holidaymakers and hotel staff melded together for one long, carefree summer filled with hope, secrets and showdowns.

According to local broadcaster TV2, Badehotellet is the most watched Danish drama over the last 10 years, securing an average share of 63%. Hopes are high that the series, which also airs on TV2 in Norway, TV 4 in Sweden, YLE in Finland and Greece’s ERT, can repeat this success when season four debuts on January 23.

The story picks up in the summer of 1931, when things have changed at the Badehotellet. The hotel manager, Mrs Andersen, has caught an illness and leaves her daily duties in the hands of Fie as their well-known, loyal guests – as well as first-timers – are about to arrive at the hotel to enjoy another summer vacation away from ongoing global crises.

The show is written by married couple Stig Thorsboe and Hanna Lundblad, who are behind some of the best-known dramas in Denmark, most notably Lykke (Happiness) and Krøniken (Better Times). Thorsboe has written more than 200 television episodes, while Lundblad has previously worked as a script consultant for Danish public broadcaster DR.

Badehotellet is produced by SF Film Production in coproduction with Nitrat Film and Thorsboe & Lundblad, and distributed by TV2 Productions & Rights.

Here Thorsboe and Lundblad tell DQ about the origins of the series, why they enjoy writing together and why the series is an antidote to Scandinavian noir.

Where did the idea for Badehotellet come from?
We were inspired by the time when the world turned from the Roaring Twenties through the Wall Street crash and depression and suddenly faced another devastating war. To some degree, we found the time mirroring the time we’re living in now. We were intrigued by the clash between involvement and denial.
Looking for a not-too-costly, original historic location, which could house an upstairs-downstairs story, we got the idea that an exclusive seaside hotel, the likes of which surfaced in large numbers along the coasts of Europe during those years, could be a wonderful setting.
Before common people even knew what the word holiday meant, rich people went out to the sun and beach each summer, staying at seaside hotels where young local girls waited on them – the same hotel, same guests for up to five or six weeks, a lovely ‘summer family,’ a clash between town and country, guests and maids. And everyone was most concerned with private problems, without noticing the outside world was heading for disaster.

How was the story developed for TV2?
We pitched our idea to TV2, who immediately liked it and ordered a detailed treatment with a description of style, genre, the level of acting and the presentation of the leading characters. Based on the script of the first episode, TV2 chose to speed up and our producer, Michael Bille Frandsen, was asked to line up the production with ourselves as coproducers. Filming started less than a year after our first meeting with TV2.

How would you describe your writing process?
We have a year cycle. When we have finished the previous season’s final episode in post-production, we start to develop a new season, typically in January. We use a couple of months to find the main arcs, before we begin to develop and write each episode. It takes five weeks per episode. The first three weeks are used on storyline, the fourth week on structure and the last on dialogue. Here we often have audio recordings of improvisations, when they spontaneously appear during storylining. From May, the production of the first three scripts begins. We are currently watching dailies and are available for the director, while during the summer and fall we continue writing the last four of seven scripts.

What do you enjoy about working together to write the show, as opposed to working alone?
We’re married and this is our way to spend some time together. Seriously: it’s natural for us to work this way. We’ve done it for more than 20 years and, before that, we’d both co-worked with other writers for years. For us, it’s more of a talking process than a writing one. With five to six plotlines per episode, there is much to keep track of, much time spend to find the flow.

How did you settle on the show’s visual style and tone?
We wanted the pictorial expression to reflect summer, light and colour – quite the opposite of Scandinavian noir. The genre should be a mix of drama and comedy, tears and laughter. We were inspired by Room with a View and Gosford Park, and perhaps most of all Jean Renoir’s 1938 masterpiece The Rules of the Game, with lots of dialogue at a high rate and a clear contrast in the level of play between the guests from the bourgeoisie and the regular, local maids.

Who are the lead cast members and what do they bring to the series?
We had a thorough casting process and are very happy to have so many of the best Danish actors. Among these are Bodil Jørgensen, Lars Ranthe, Bjarne Henriksen, Anette Støvelbæk, Anne Louise Hassing and Jens Jacob Tychsen. Foreign viewers will recognise actors from The Killing, Borgen, Unit One and Better Times. Compared with their roles in those drama series, it’s a pleasure to see these actors express Badehotellet’s more colourful characters. But it is equally important to mention that this is an ensemble series. It is without any doubt that the entire cast has a large share in the show’s success.

Are your scripts very descriptive or do you allow the director and actors lots of room to bring their own thoughts to the series?
We belong to the tradition in which the script is pretty thorough and rather detailed. In our experience, this gives the director and the actors a comfort to bring their own creativity into the process. They do not change the script, but redeem it wonderfully with their talent.

Where is the series filmed and how do you use locations in the script?
The majority of the location has been made on set. We’ve built a seaside hotel in the studio, both exterior and particularly interior sets with bedrooms, a living room, dining room and kitchen and maids’ rooms, among others. In each episode, we supplement the set by shooting scenes by the sea and beach on the west coast of Jutland, where the fictional hotel is located in the story. Gradually more locations have been added, including a small farmhouse nearby, a train station, a police station, a shipowners’ building and a grocery store. But at least 80% of the action takes place on set, which is so lifelike that the audience experience it as a real hotel.

What are the biggest challenges when writing the show?
Without a doubt it is to get all the characters in play in each episode. It’s also a challenge to weave each episode’s five or six plotlines effortlessly between each other within the 45-minute running time.

Now in season four, why has the show proven so popular?
We think it has something to do with the mix between drama and comedy. There are very funny scenes followed by touching ones – like in life, you could say. The audience is taken by the characters and their struggle, funny or sad. And, as it should be in a period series, the characters’ problems are also contemporary. They speak from their time straight into ours. We hope the short answer is that the series is entertaining.

What do you enjoy most about writing Badehotellet?
Working with lots of enthusiastic and talented people on set and behind the scenes. With so much joy on set, working hard [is a pleasure]. This is maybe the best explanation for the success of the series.

How has the role of a television writer changed in Denmark and do you enjoy other parts of the production process?
Over the past 25 years, TV series in Denmark have become increasingly writer-driven, inspired by the US. As far as we know, however, Badehotellet is the only Danish show in which the creators and authors are also coproducers with ultimate responsibility for the series’ content and artistic style.

What are you working on next?
Season five of Badehotellet.