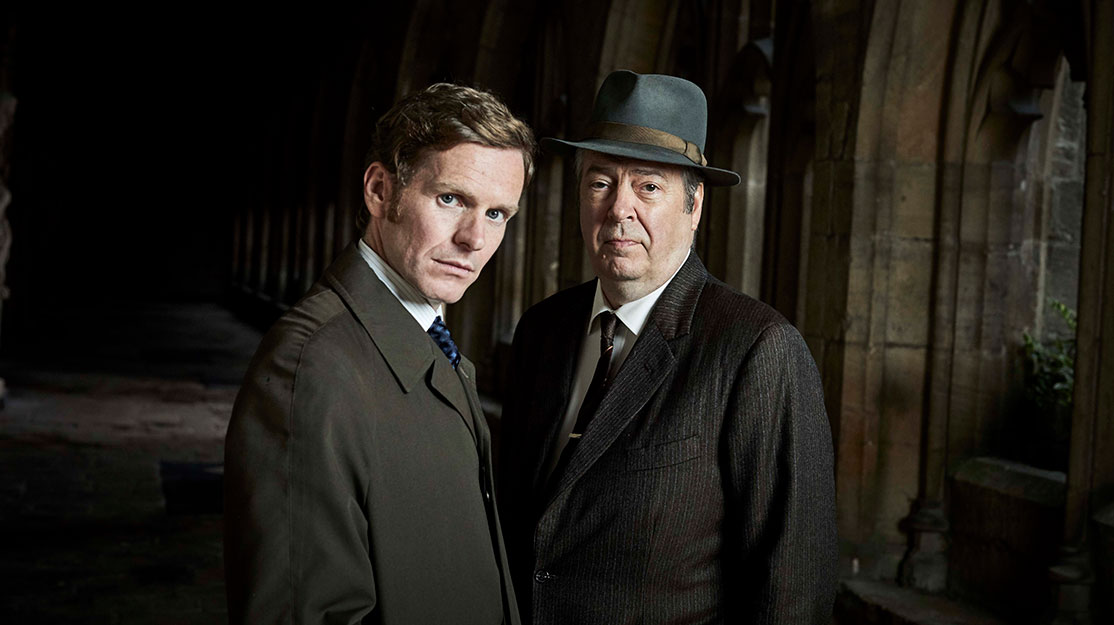 As Inspector Morse prequel Endeavour returns for a seventh season, star Shaun Evans talks to DQ about keeping the detective series fresh, avoiding impersonations and stepping into the director’s chair.

In the beginning, it was a single drama commissioned to mark the 25th anniversary of Inspector Morse. But eight years later, prequel series Endeavour is now back for its seventh season, continuing the story of the young Endeavour Morse’s early days as a detective in Oxford.

Shaun Evans returns in the title role, once again joined by Roger Allam as DCI Fred Thursday for three new films again written by Russell Lewis, taking the characters into a new decade, the 1970s. Episode one, Oracle, sees Endeavour taking in the new year at an opera house in Venice, while Thursday is convinced he has found the man responsible for a murder on an Oxford towpath.

New acquaintances and old friendships make themselves known, while a contentious college project develops into a fatal battle of the sexes.

The ITV drama – coproduced with Masterpiece in the US – may have been on air for eight years, but the limited number of episodes each year means Evans feels the series is as fresh as ever.

“We’re lucky because we only generally have four in the season, and this time it’s even less,” he says. “In a way that gives you more scope and because you’ve got a bigger gap between seasons it doesn’t feel like you’re constantly at the coalface. You can go away and do something else and then come back. That makes it easier, but also knowing there’s a shelf life [for the series] and that there is an end point focuses the mind. The great thing, though, is if the viewing figures are good enough, they’ll invite you to come back. It’s not taken for granted.”

With an eighth season already commissioned, the drama is now rapidly catching up to the original Morse series and it seems likely ITV will take Endeavour to its conclusion, however close that might be to the original series, which ran between 1987 and 2000.

“Having read the books [by Colin Dexter that inspired the original Morse series], that was my starting point of where the character was at the very beginning. But now, I feel like it’s got its own life,” Evans says of the prequel. “My only duty really is to finish the story we’ve embarked upon. To be honest, I think we’ll leave a big enough gap. There will be something like a 10-year gap before Morse starts, so I don’t feel too constrained by that.”

From the outset, the actor says he wanted to avoid any constraints put on Endeavour by the original series, particularly when it came to how he would portray the actor, who was originally played by the late John Thaw.

“When we first started I said I didn’t want to do an impression, otherwise what’s the point? I’m not doing any creative work then,” he says. “Fortunately it’s snowballed and so my intention is, if we are going to continue, to continue in that vein, to just keep doing my work and doing the work I’m proud of and bringing immediacy to the role if I’m acting it or a dynamism to if I’m directing it, so I can sleep at night. Beyond that, it’s not my decision.”

The current trend in television drama is for stories to play out over eight or 10 hours, with just as much investment in character development as there might be in the plot driving through the series. With a restricted number of episodes and a crime to solve in each one, does Evans feel he’s able to dig deep into Endeavour’s own personality?

“What I have discovered to be interesting is the plot-versus-character aspect of it and negotiating that,” he says. “For example, what I enjoy now is the flexibility of whether something is implausible or unlikely. There’s the flexibility of going, ‘Okay, that could happen’ and how do I get this character from scene A to scene B in a way that’s as believable and as immediate as possible, even though it may be slightly implausible. That is the nature of this job, rather than me creating a character. So the whole experience has really made me rethink what I think about acting for the screen and what that is moving forward.”

As a producer on the series as well as the leading actor, Evans is constantly in touch with the ‘family’ behind the scenes, whether that’s series creator and writer Russell Lewis or the production team at Mammoth Screen. “We’re all speaking throughout the year so it there’s something that needs our attention, we’re already talking about it anyway. And by the end of each season, we’re all more or less on the same page about going, ‘That didn’t work so well, but that was really good.’ For better or worse, it’s a constant conversation, which is a really unique and joyous way to be working.”

Evans is now adding directing to his list of duties and with three episodes of BBC medical drama Casualty under his belt, he made his directorial debut on Endeavour with an episode on season six. Now in season seven, he repeated his dual role on the first episode, Oracle.

“I’m not going to lie and say I was a kid running around with a 16mm camera,” Evans says of his directing pedigree. “I wasn’t, but from the get-go I was always more interested in doing as much as I can and being as broad as I can. I was glad when I was given the opportunity.”

He got his first break on Casualty, where series producer Erika Hossington invited him on to the show. “She did some due diligence and called around, heard that my heart was in the right place and then gave me the opportunity,” he recalls. “I prepared like a motherfucker and went and did it. The great thing for me at least about doing that rather than making a short film as a transition [into directing] is there’s something that focuses the mind when, yes it’s a machine, yes in six months time this will be out and people will see it, but also you’re surrounded by paid professionals who can sniff out if someone doesn’t know what they fuck they’re doing.

“For me, it’s better to learn under a little bit of pressure. It was an amazing experience in that respect. I started to learn about scenes and covering scenes. It was nerve-wracking for the first day or so but you’ve got to have a thick skin and be like, ‘Okay, I wasn’t so great at that. I’ll learn for next time.’”

He went on to direct three episodes of Casualty before filming 2019’s Apollo episode of Endeavour. “That was a really good experience and then they asked me to do it again. We also have a shorthand together now, myself and the team, because we’re friends and because we’ve made so many of them. I understand the tropes of this kind of story so I’m not wasting time there. I also have a shorthand with both the returning crew and the cast, so it makes it very efficient.”

Oracle opens with shots across the Oxford skyline and above rooftops, with atmospheric images of haunting woods and fog-covered bridges and canals. These are cross-cut with pictures of Endeavour attending the opera in Venice, where an elaborate performance – created purely for the series – is taking place on stage. There are also shots taken through windows, framing characters in different ways, while the camera, rarely still, is often moving with characters as they walk through crowds or waiting for them to approach from afar.

Evans says directors on the show, which is distributed by ITV Studios Global Entertainment, are encouraged to be “as bold and as different” as they can to make the film their own, rather than relying on a directing blueprint.

“I storyboard it for myself in a very rudimentary way and then I make a list of things I want to see and the backgrounds I want to see and where I imagine things will take place, and then throw it out, and then start again,” he says of his preparation process. “You have to build to be able to destroy but that’s part of the nerves. I want to be the one with all the answers, as a director should be. There’s nothing worse than seeing someone in that role falter and flounder. It’s most effective when that person is most decisive and has a clear goal and is confident enough to be open to better suggestions. That’s what I’ve noticed by working for 20 years.”

For Oracle, he also enjoyed the opportunity to film in Venice, where he and a skeleton crew spent just a few days collecting what they needed.

“When you’re working on a TV show, it’s a huge circus that comes around but it’s great because you have all of that support,” he says. “But we wrapped on the Tuesday and then me and three others went to Venice on Wednesday, so we were shooting it in a very different set-up. There’s much more of a guerrilla style then. I flew out on Wednesday morning, looked at the location Wednesday afternoon and then we started shooting Thursday so you’re open to the TV gods to give you what you need and then you make it. It’s as simple as that.

“After being in the pressure cooker of being on a TV set, there’s something very freeing about just being in this place with a camera and a small team and knowing what you need, with just very rudimentary equipment. There’s something about that I found really engaging that I hadn’t done before, either on Casualty or Endeavour.”

Evans says what’s great about directing versus acting is that you can learn to become a better director, while acting is more instinctive and intuitive. He has also learned that, behind the camera, both preparation and an openness to other people’s ideas are key.

In addition, “experience is all,” he notes. “Don’t be precious. Go and do a show just to have hours. That was my take on it. You can learn even on a job you know is not your ultimate goal, but you’ve started on the journey and you learn some things. And work begets work as well. There’s no point you being aloof, sitting in the house until you get your big opportunities to make your film. If you’re out there busy grafting, then you’re learning something and people are talking about you anyway, and you’re not becoming stale. That would be my last thing that goes for anything. That’s a skill to be learned.”

The actor says he would eventually like to direct something he had written himself, adding that he’s “ambivalent” to whether that be a film or on television. “My hope is I’m in all of this for the long haul, so you can just keep that keep getting better and not just have one film that you want to direct or one part that you want to play,” he adds. “To get better at your work would be my goal.”