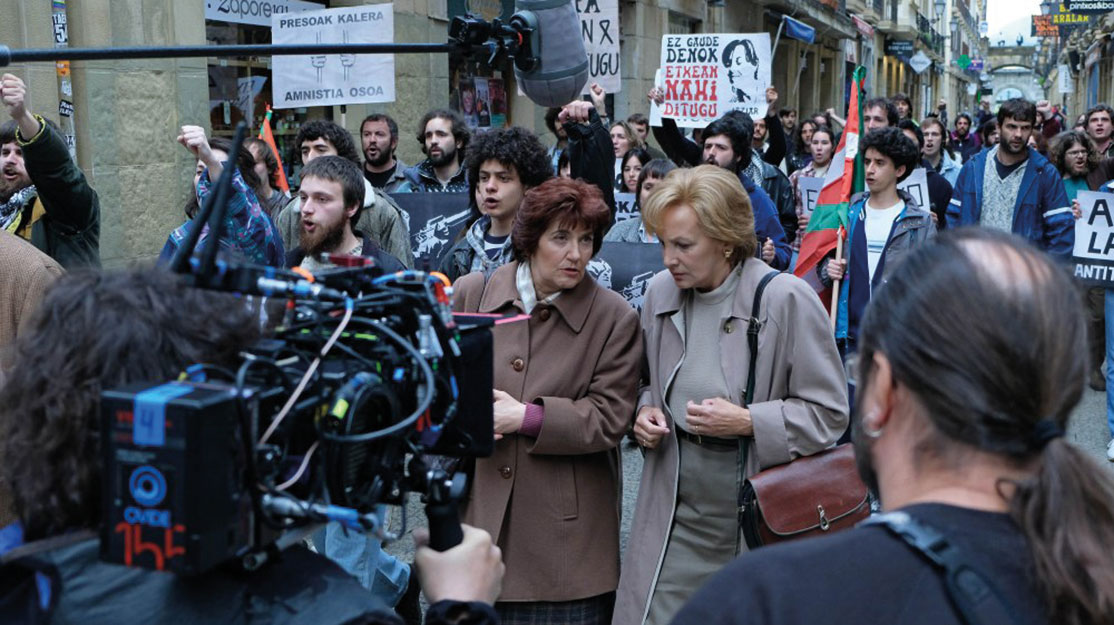 HBO Europe’s first original Spanish commission, Patria is an adaptation of Fernando Aramburu’s novel on the impact of the Basque conflict. Showrunner Aitor Gabilondo tells DQ how he tackled this tumultuous period of Spanish history.

Much like the pale tourists laid out across the Costa del Sol, Spanish drama is enjoying a moment in the sun.

This month, a new player will enter the Spanish-language sphere in the shape of HBO Europe original Patria. Adapted from Fernando Aramburu’s 2016 novel, the eight-part drama tells the story of two families torn apart by the brutal armed conflict that ravaged Spain’s Basque Country for more than 50 years.

For creator and showrunner Aitor Gabilondo, the show, which launches on September 27, hits close to home. Gabilondo grew up in the Basque Country in the 1970s and 80s, during one of the conflict’s most tense periods, and had long been searching for a story that mirrored the political unrest in the region during that time.

“I had spent a long time wanting to tell a story about the period of my youth in the Basque Country with [Basque separatist terrorist group] ETA in the background,” Gabilondo tells DQ. “I’d been working on some ideas when I came across an online review for a novel that was yet to be published. I read the book’s synopsis and I realised it was very close to what I was looking for, so I got in touch with the publishers and acquired the rights.”

Published while Gabilondo was negotiating the rights deal, Patria became a national bestseller and a critical success, although Gabilondo confesses he “didn’t imagine it was going to become such a huge hit.”

Soon afterwards, Gabilondo’s plans for the drama led him to the recently established HBO España and a meeting with Miguel Salvat, the commissioning editor of original programming at HBO’s Mediterranean posting who was set to take charge of the fledgling Spanish operation.

“I knew HBO were setting up a Spanish office, but I didn’t know when, nor who was going to be leading it. Some months later, I learnt that Miguel was going to be in charge, but he told me he wasn’t going to take up his role for another few months. So I waited and worked on it. When he joined, I met him at a café – before he even had an office – took him the book and told him my plans for the project,” Gabilondo recalls.

Salvat took a liking to the project and Patria received the green light in 2018, becoming the first original series commissioned by HBO España. Gabilondo says he was “very satisfied” by working with the broadcaster, which ensured he felt “very supported” throughout the development process.

Aramburu’s novel is an emotionally charged piece spanning 30 years of the Basque conflict and centring on Bitorri (played by Elena Irureta) and her lifelong friend Miren (Ane Gabarain). When Bitorri’s life is upended by the death of her husband in an ETA attack, the pair’s friendship is also affected, as Miren’s son is an ETA member.

The story is a regional one at its core, with local Basque geopolitics and issues featuring heavily throughout the narrative. Gabilondo therefore chose an all-Basque cast for the series, which is produced by the showrunner’s Alea Media.

“I’m Basque and I have lived with [the conflict] up close,” he says. “Since I was young, I have had to learn to interpret a reality that was never explained to us. You had to read in the dark and draw your own conclusions.”

However, Gabilondo has no concerns that this will lead to the show falling short on foreign shores. “I’ve identified three viewing groups: those who lived with [the conflict] in the Basque Country, those who with lived it in Spain and those who lived with it elsewhere,” he says. “It’s a question of proximity – the closer you are, the more nuances and complexities you’ll understand and the harder it’ll be to unravel your emotions towards it. But that doesn’t prevent someone from understanding it if they are far away, as it’s a universally recognisable story.”

The novel takes an intimate approach to issues of grief, moral contradictions and the memory of war, bringing the intensity of the conflict to the fore. Adapting the 646-page novel for the screen was no easy feat, and Gabilondo spent a total of 10 months writing the eight scripts.

“I would like the pain, emotions and the trauma of the characters and the society that surrounds them to be understood, and to show how easy it is to light the fires of hatred but how hard it is to put them out,” he says.

Gabilondo’s interpretation, like that of many other Spanish readers who lived through the period, was influenced by his own emotional baggage, from which Gabilondo admits he was unable to detach himself during the writing process.

“It was impossible, I wasn’t able to,” he says. “To be honest, I wrote the project with a heavy emotional load. There were pleasurable moments throughout the process, but also moments of panic and sleepless nights. I questioned whether I was doing a good job or whether it was the right thing to do, as the events are so recent.

“Since there was so much expectation around it, people’s questions made me doubt my own decisions or approach. It’s been a big journey of personal, emotional and professional growth for me. I tried to be professional and concentrate on writing a good story, but I won’t deny that it’s been a process with an added emotional weight and responsibility.”

The showrunner identifies two pivotal factors within the novel that he felt were important to transfer to the screen: the passage of time and perspectivism. “Time, within the series, starts off as a light drizzle,” he says. “But as it goes on, the characters notice that they are getting more and more wet and their clothes are getting heavier. So, by the end, they are carrying a large weight upon them.”

This goes hand in hand with the novel’s perspectivism – the notion that one’s experience can change the way they perceive something. “There are characters whose point of view changes; you may think you have all the information about a character, only to find out later on that you don’t. You can see them mature and change, with some of their views fragmenting over time,” Gabilondo explains. “Maintaining that perspectivism was key because it allows viewers to get a more general idea of the pain caused and keeps them in suspense, which I thought was a very enriching factor.”

The writer’s desire to feature those two elements prominently meant an episodic series was the most fitting structure for Patria, despite being offered the chance to turn the title into a movie. “From the beginning, I knew it had to be a TV series,” Gabilondo says. “Once I had the rights, I received offers to make it into a film, though I never saw that as an appropriate format for this story due to the importance of time. A film would’ve remained an anecdote, and I wouldn’t have wanted this story to be reduced to that for anything in the world.”

Nonetheless, the development of Patria brought with it a production schedule similar to that of a feature-length project. The show spent more than three years in development and was shot on location across 22 weeks. Felix Viscarret and Oscar Pedraza shared directing duties, helming four episodes each.

“It has been a gratifying job, though it was also tough, as one of the biggest problems was choosing what to leave out. As the showrunner, I told [Viscarret and Pedraza] what I wanted and they used their technical expertise and sensibility to bring that to their episodes. It’s been a good collaboration. There was harmony between us.”

Patria’s release is timely, riding the crest of the wave of successful Spanish drama, but Gabilondo believes the quality of the country’s output is no different now from the past. “In terms of fiction, Spain has always been a mid-table country. We’re never the best but we’re never the worst,” he says. “Suddenly, in the last few years, there’s been an eruption in interest in fiction with a more Mediterranean flavour to it. Thanks to technology and streaming, it travels more, but there’s a bigger interest and we’re really benefiting a lot from it. It’s not to say that we don’t warrant it, but I feel very fortunate to be living it and I hope it lasts.”

For Gabilondo, a butcher’s son who once planned to study agriculture, getting his passion project from page to screen has been trying yet rewarding. Viewers will hope his decision to choose film sets over open fields will deliver another binge-worthy Spanish series to gorge on.

“It has been an intense project,” the showrunner says. “It hasn’t been a walk in the park, but we’re very happy with it.”