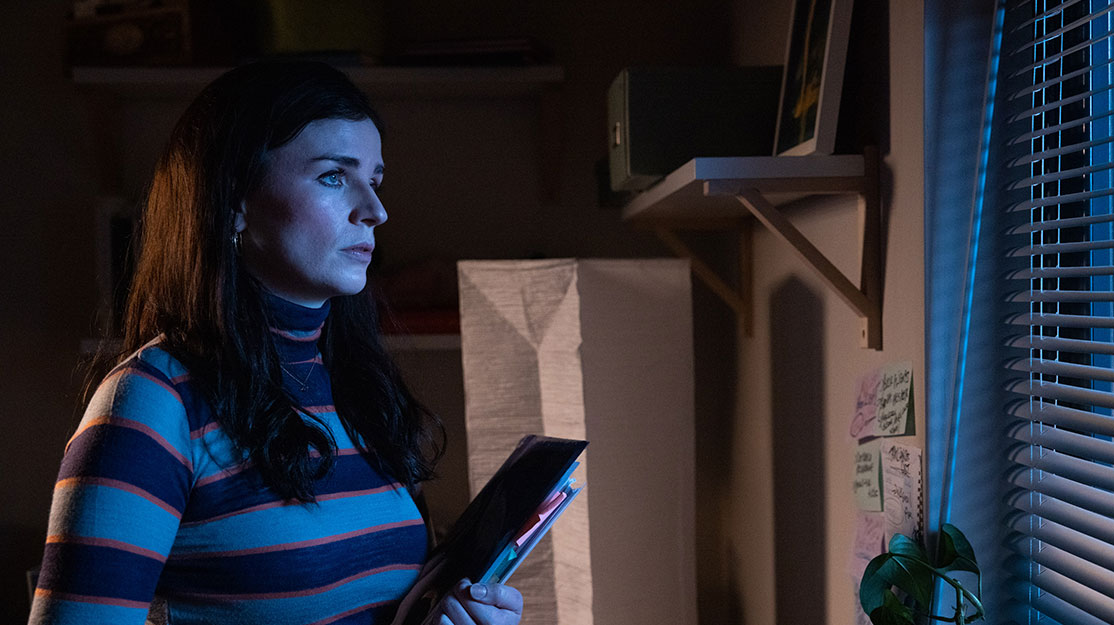 Bea on the Up

Award-winning actor and comedian Aisling Bea speaks to DQ about writing and executive producing comedy This Way Up and reveals how she has been affected by the Covid-19 pandemic.

When season two of Channel 4 and Hulu comedy This Way Up aired this summer, it marked the return of an award-winning series that tackles mental health and relationships from the perspective of two sisters, with equal helpings of humour and poignancy. But what won’t be immediately apparent watching the series is the toll that writing, producing and starring in the show during the pandemic took on Aisling Bea.

“It broke me a little bit this time around, if I’m honest,” she tells DQ.

In the series, Bea plays Aine, an English-as-a-foreign-language teacher trying to get her life back on track after a spell in rehab with the support of sister Shona (Sharon Horgan), who is fretting not only about her younger sister but also her own life choices. In season two, Aine is making a go of her blossoming relationship with Richard (Tobias Menzies), the father of a boy she tutors, while the sisters share numerous ups and downs along the way.

Making the six new episodes involved working 17-hour days for seven months. “That’s the truth of it,” she says, understandably describing the hours as too long. “Television is not made ethically and it’s not made with crews and lives and rest in mind. The ‘show must go on’ mentality is the biggest winner.

“People don’t really want to know how it gets made, but we’re expected to make stuff that’s artistically good to a better level of quality than it would have been 20 years ago in the exact same amount of time, without rest or recuperation a lot of the time. Then with Covid, most of the crew members were not breathing properly because they’re wearing masks all day, and that comes at a cost. Making a show in January 2021 and writing it during 2020 did not come without costs – quite massive ones in places. I’m still recovering. I want to find a little bit of joy again.”

While Bea has been a regular presence on television for almost 20 years, with credits including The Fall, Hard Sun, Quiz and numerous comedy panel shows, This Way Up is the first series she has written and executive produced, with Horgan’s production company Merman (Catastrophe, Motherland) making the show.

The series first aired to huge acclaim in 2019, with Bea winning the Breakthrough Talent Bafta the following year, and many viewers were able to discover the show for the first time during the numerous lockdowns that have punctuated the pandemic.

“I have been really touched by the reaction because the people who connect with it are the people I wrote it for,” she says, noting the show’s subtle humour and tender emotional moments. “If you’re like, ‘This doesn’t have any jokes. I thought it would be funnier,’ I’m like, ‘It’s fine, I didn’t write it for you. It’s OK.’ I know exactly who I wrote it for and why I wrote it. I suppose you get to a stage in your career where you know what you have to prove and you know what you don’t have to prove. If they wanted more big, sassy jokes, there are YouTube reels of it.”

Bea’s writing career dates back further than her stand-up comedy, for which she became only the second woman in 25 years to win the So You Think You’re Funny? award during the Edinburgh Fringe Festival in 2012.

“It’s just that nothing took off – and that’s most people’s story,” she says of her early days in the industry. Her next on-screen role will be in Disney film Home Sweet Home Alone, the sixth entry in the Home Alone series. “People are like, ‘You’ve just started acting?’ I’ve been an actor for 20 years. And they’re like, ‘Oh, you’re doing an accent [in Home Sweet Home Alone]?’ Twenty years! Let me do an accent, lads.”

This Way Up actually started life as a vehicle for Bea and fellow Irish star Horgan to play sisters. “We’d had two half-successful attempts in a show called Dead Boss that got cancelled and in another show we wrote that Channel 4 didn’t pick up. This was our last hurrah. A lot of the time, it’s a really good idea to start with some kind of chemistry you enjoy and build a show around that. That’s where This Way Up came from.”

When it came to writing season two, “’hell’ is probably the easiest way to describe it. It was really hard,” Bea says. “The one thing I knew after season one was that I couldn’t do it alone again with no support. Then it’s like God laughed and there was lockdown where I couldn’t physically see anyone, and then we had to make the show without having a readthrough with other actors. We’ve never had a drink to celebrate the show being made. There’s been no premiere or group get-together. It’s like it didn’t happen. It’s just been a big email with six weeks of a shoot where everyone was worried about passing each other a pen, and no one seeing each other’s faces.”

In fact, such was Bea’s strength of feeling about the way people’s lives have been upended by the pandemic that it features in a news report shown in the final episode of This Way Up’s second season, aligning the show’s fictional characters with real-world events when the first UK lockdown is announced.

“Because of the subjects of my show, it felt stupid [not to include it],” Bea says. “I remember going for one of my government-designated walks when I was trying to write it and I was just looking at these 10-storey buildings – which is something that inspired the first season – and every light is a different television show going on in its own right, all on top of each other. That’s never been more relevant than after lockdown.

“I just thought, ‘I can’t write this show and not have that affect it, because it’s affecting me and would affect [my character] Aine so much. It felt weird not adding it in. But there were times when I was like, ‘Oh my God, is everyone bored of listening to this?’ While a certain amount of people would rather escape from it, what I tried to do was have a hint of this and that. I’m proud of how we did it.”

With that in mind, could a potential third season be set during the pandemic? “I don’t know, to be honest,” Bea says. “As a person, I’m still recovering from the year. Everyone’s had it really hard, you know? And making the show definitely broke a bit of me. I don’t know myself, really, yet.”

With her new perspective of working behind the camera, Bea presided over the shortform competition jury at French television festival Canneseries last month and was impressed by the different approaches writers from around the world have towards storytelling. The winning entry, Norwegian series About Saturday, was created by Liv Mari Ulla Mortensen.

“It’s quite inspiring really because I wouldn’t normally see so many international shows,” she says. “With less budget like you have in comedy, and with my show as well, you’re always going to be more creative and you rely a lot more on performances. There were some incredible performances.”

As a fledgling producer, Bea jokes that she’s “always been attracted to power – but will I use it for good or will I use it for myself?” Before starting work on This Way Up, however, she had never watched a casting tape or audition that wasn’t her own.

“I’d done 72,000, but to start actually seeing how those conversations work, I wish I’d known about them 10 years beforehand – the things that matter and the things that don’t,” she says. “Judging is really weird, because if you managed to make something in the past fucking year, you get an award. You just get an award from me. If you made something before Covid or recently when you didn’t have to wear masks and you were vaccinated, you don’t get an award from me. But people who made things in between, award.”

After a difficult 18 months, it’s no surprise to learn that Bea’s next move will be a project that allows her to play and collaborate with other people “and have some kind of fun and creativity at work.”

“But it’s not ‘woe is me.’ I realise not everyone gets to have their own bloody show, but this one definitely came at a cost,” she says. “I’m proud that I wrote the first one, maybe as a vehicle for me and Sharon, and then I wrote the second one on purpose for the people I feel needed to watch it. I wrote it for me as an 18-year-old looking for the subject matters in it, for people who want to feel seen and those in recovery as well.”

tagged in: Aisling Bea, Channel 4, Hulu, This Way Up