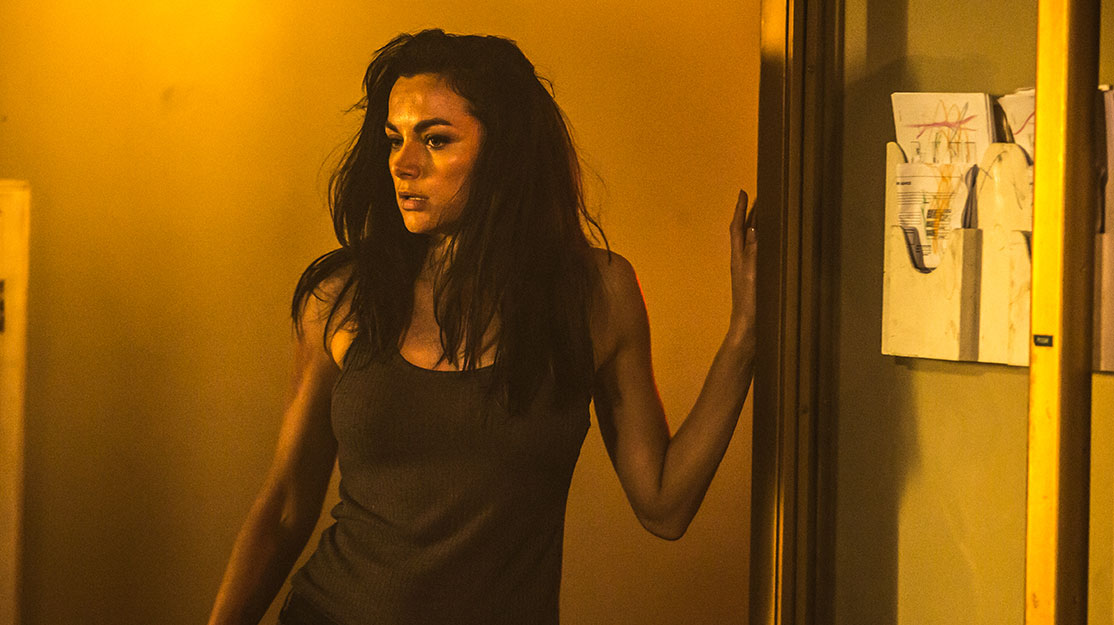 Blood Drive might be the most extreme, bloody and downright original drama of the year. DQ chats to star Christina Ochoa about playing the femme fatale in Syfy’s Grindhouse thriller.

As another episode of Blood Drive gears up, the continuity announcer describes the series as “Grindhouse with heart.” That’s just one way to describe what is arguably television’s boldest and most daring drama of the year.

Ostensibly a series that follows a group of drivers taking part in a high-octane car race, Top Gear this isn’t. In reality, it’s a high-octane thrill ride set in a near-apocalyptic future, as LA’s last good cop is forced to join a twisted, cross-country death race in which cars are fuelled by blood.

As the 13-episode season progresses, Officer Arthur Bailey attempts to uncover the shady dealings of the mega-corporation behind the race, while his partner, dangerous femme fatale Grace D’Argento, has her own agenda – finding her missing sister.

Pushing production design to the extreme, the highly stylised series is billed as being among the first to bring the cinematic trend of Grindhouse movies to television, channeling the tone and visual style of 1970s movies that blended action and horror with gratuitous sex and violence – and enough blood to ensure every character is covered from head to toe in the red stuff by the end of each episode.

True to the genre, Blood Drive also doesn’t take itself too seriously. Commissioning network Syfy describes it as “over the top” in its own press material. There are also jokes littered through the script, while a mock advert for Smax, a drug-spiked candy brand at the heart of one particularly murderous episode, warns that eating it may cause migraines, night sweats, restless legs, schizophrenia, spontaneous human combustion, brain liquidation and homicidal tendencies – to name a few.

It’s a show that is markedly different to anything else on television right now – American Horror Story on steroids, with flesh-eating cars – and that’s why it appealed to star Christina Ochoa, who plays Grace, opposite Alan Richson’s Officer Bailey. The show also includes a star turn from Colin Cunningham as race ringmaster Julian Slink.

“I love being part of something truly different,” Ochoa says of the series, currently airing on Syfy UK and distributed by NBCUniversal Television Distribution. “It’s unlike anything else out there. [Creator] James Roland really took a risk and we were all excited to be a part of that.”

Is Ochoa a fan of the Grindhouse genre? “I am now,” she admits.

Determined and ruthless, Grace acts as the viewer’s guide through the warped world of Blood Drive as Arthur must quickly get up to speed with the dangers that await him and his race partner on the road ahead. When her blood-red Chevrolet Camaro runs out of fuel in episode one, she has no problem feeding another human to her hungry engine.

“She’s unapologetic and I love that,” Ochoa says. “She’s at peace with her darkness and that’s a concept that’s very appealing to explore as an actress. Along the way, we learn how love, be it family or romantic, gets her back in touch with her own humanity.”

Filmed on location in Cape Town, South Africa, the actor says the make-up team faced the daily task of covering up her “dozens” of bruises, as she insisted on doing as many of her own stunts as possible. “Physicality aside, the biggest challenge was probably making sure the relationships were very grounded,” she says, “since the characters themselves are known archetypes and pretty extreme, like the good cop and femme fatale.”

US television this year has been notable for the number of strong female characters leading drama series, from Feud, Scandal and The Good Fight to the ensemble casts of Game of Thrones, Top of the Lake: China Girl and Big Little Lies. Top of the Lake’s Elisabeth Moss also took centre stage as Offred in The Handmaid’s Tale, this week picking up the best actress Emmy for her performance in a series that was also named best drama series.

It’s a trend that hasn’t gone unnoticed by actors in those roles, with Blood Drive’s Grace among the most fearless female characters on television. Ochoa notes: “I’ve been very lucky to be cast in roles as strong, powerful, intelligent and confident women. Renn (in TNT’s Animal Kingdom), Grace and Nora (in The CW’s forthcoming Valor) are all women I admire in some way, despite their coping mechanisms or their faults. They own their mistakes and they are all fighters. I’m proud to be part of a community that is striving to represent women in such a strong light.”

Speaking of Valor, the series, which debuts in the US on October 9, is part of the latest television trend – military dramas. Others launching on broadcast networks this fall include NBC’s The Brave and CBS’s SEAL Team. Cable channel History’s own Navy SEAL drama Six has also been renewed for a second season.

In Valor, Ochoa plays warrant officer Nora Madani, one of the first female helicopter pilots within an elite US Army unit called the Shadow Raiders. When the team is sent on a top-secret mission to Somalia, only Nora and Captain Leland Gallo (Matt Barr) return, leading to questions about what really happened. But while an investigation delves deeper into the mystery, they must also prepare for a new mission to rescue a soldier being held by terrorists.

Ochoa says it was Valor’s script, written by creator Kyle Jarrow, that drew her to the part, describing it as “one of the strongest I’ve read in a very long time.” She continues: “Leave it up to a playwright to craft such a wonderfully fleshed-out character with a woven story and conflict that defies all tropes. I fell in love with her immediately.”

The actor – who is also a published science academic and podcaster – carried out a lot of research for the part. “I read as much as I could – biographies, books like Shoot Like a Girl, Ashley’s War and Black Hawk Down – but what was most instrumental was the conversion with female vets, two of whom are writers on the show, and our technical advisor Dan Laguna,” she says.

Blood Drive won’t be returning for a second season, but if Valor proves to be a hit and earns a full-season commission, the show is likely to keep Ochoa busy for the rest of the year – and potentially years to come. But beyond acting, Ochoa also has her eye on creating series.

“I have a production company and my producing partner and I are currently developing content with writers and other talent,” she adds. “Producing is definitely something I’d like to do in the long run.”