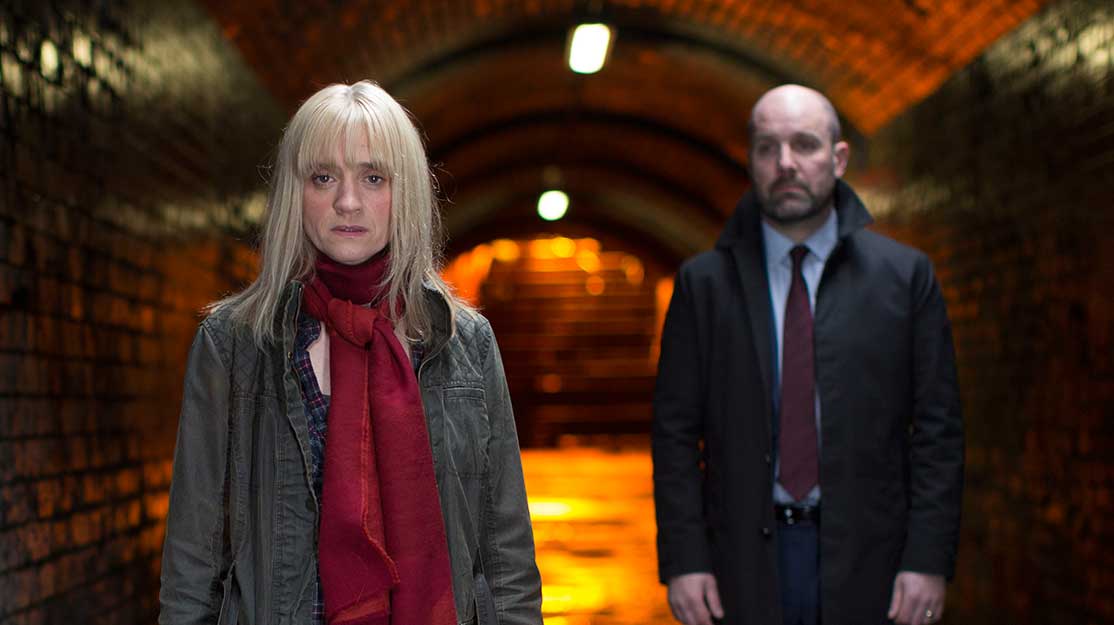 Katie Baxendale tells Michael Pickard how she turned her own fear of crime into the plot for a new four-part BBC drama.

It might seem unlikely for a writer who admits she finds crime drama “horrendous” to then turn around and create one.

But that is exactly the action taken by Katie Baxendale, who penned BBC1’s new four-part drama From Darkness, which airs this month.

Four years ago, Baxendale was one of a number of female television writers invited to attend a seminar hosted by the BBC’s Writersroom scheme, which aimed to get more women into crime writing.

“It was really amusing for my friends and family because I’m known to be the most cowardly, terrified person who gets really upset at a lot of crime dramas because I find them too horrendous,” Baxendale says. “I just don’t like to think of things like that. But when I got there, I was encouraged to turn my own fear into an idea.

“The genre was too powerful for me. I would get really angry if things were too gratuitously violent. It seems to get more extreme in certain shows and that wasn’t for me. That’s why this show is a very emotional look at the effects of crime.”

From Darkness (main image), Baxendale’s first original drama, stars Anne-Marie Duff as Claire Church, a former police officer who left the force after the impact of violence became too overwhelming for her to continue. But years later, when several bodies are discovered on a building site, she is forced to battle her demons as she is pulled back into a world she left behind and a case only she can solve.

The psychological crime drama is produced by BBC Drama North and directed by Dominic Leclerc. The executive producers are Hilary Martin and Oliver Kent, while BBC Worldwide has distribution rights to the series.

Baxendale says the story at the heart of From Darkness is extremely personal: “The story – what happens to Claire and her past – isn’t my life but her fearfulness and her unwillingness to look back at the past and the past overtaking her is something I could relate to a lot, as well as this fear of violence. It’s when you reach a certain age and realise you might have been on the run and until you confront it, you go round in circles, making the same mistakes like you’re in a repeat loop.

“At that stage of life I had young children and you just don’t want to hear bad news anymore because you feel it so strongly. Crime drama is a ridiculous add-on – why would you watch something so awful? There’s too much at stake all of a sudden. But if you’re only looking for what’s good and lovely in life, your world becomes smaller and smaller and at some point you have to face what’s wrong with things to make things right. It’s about Claire turning around and facing her past.”

Baxendale put together a two-page pitch that was picked up and developed by BBC Drama North with the help of development producer Simon Judd. With the first episode completed, a script was taken to then-BBC drama commissioner Ben Stephenson, who gave it the greenlight. Then when a second script was finished, a full series was commissioned for BBC1.

“The wonderful thing though was to start knowing you’ve got a greenlight with two scripts written out of four,” the writer says. “That’s a gift because you have time to get episodes three and four right and the actors then got four episodes to read, which is a luxury. It meant they could see where it was going. It felt really positive, the whole experience.

“It was always going to be a four-parter, but how many of those do you see? You always have to be prepared for the broadcaster to say, ‘Can you whittle it down to two?’ but they were fine. It sits very naturally in four parts and, looking at season two, I’d probably want to go four parts again. I’m really hoping for a return with Claire.”

Though From Darkness is Baxendale’s first original drama, her previous credits include London Bridge, EastEnders, Playing the Field, At Home with the Braithwaites, Fat Friends and BBC period drama The Paradise. She also co-created Channel 4’s adaptation of Julie Burchill’s novel Sugar Rush.

But embarking on a crime series for the first time, the writer says the genre allowed her to spend more time with the characters and focus on the minutiae of daily life.

“Everything’s swayed into light relief by the crime and you see normal life in a different way,” Baxendale says. “Claire Church is a big lead because you see everything from her perspective. But when you see the four main actors, every character has a big journey, which you take more than the crime drama. It’s written very tightly through their personal life so it is a character piece in the end.

“I find it challenging to make myself think about the grimness of it. It really does affect you if you’re thinking about the darker side of humanity all the time. You’re wondering why you’re creating entertainment from that, so I’m constantly working out if it’s morally justified in my head. I’m hoping it raises some debate and some issues; that it’s done sensitively and you understand the effect of violence. It’s not a bloodfest in any way.”

During the writing process, Baxendale always starts with a detailed storyline, which she describes as the “toughest bit.” She also reminds herself to “be brave” and “not to be lazy” – but in the case of From Darkness she made a decision not to watch any other crime series to ensure she wasn’t swayed or influenced by other series, instead remaining focused on her own idea.

“The way I try to get the best from myself is for my show to be its own thing,” she says. “It’s true that crime dramas in general are looking at more character stuff, but I hope this is a far more personal, emotional take on a crime drama than the others out there.

With one crime series under her belt, it seems Baxendale has overcome her own demons as she admits she has other crime-based stories “bubbling away” alongside her hopes for a second season of From Darkness.